Pirates of the Stormy Sea

POTSS is LIVE on KICKSTARTER

PiratesOTSS is a roguelike pirate ship sim inspired by Sid Meier's Pirates, FTL (Faster Than Light) and RimWorld. You are taking command of a ship trying to escape from the British navy. On it's trip through the caribbean you're encountering traders, abandoned islands, other pirates and countless British vessels coordinated by the evil commodore hunting you down. While trying to survive and finding a safe haven you can upgrade your weapons, train new crew members, improve your ship and find powerful voodoo items.

What can you expect from the game:

We are currently working on getting everything ready for a potential demo and a kickstarter / steam greenlight campaign.
You can follow the progress on Facebook and Twitter

Thanks for voting and helping Pirates of the Stormy Sea on it's quest to become the 2022 Indie of the Year. You are now in with a chance to score some free games. Help this game secure more votes by embedding the widget (or link) we have included below on your favorite sites.

About POTSS & An introduction to Gameplay 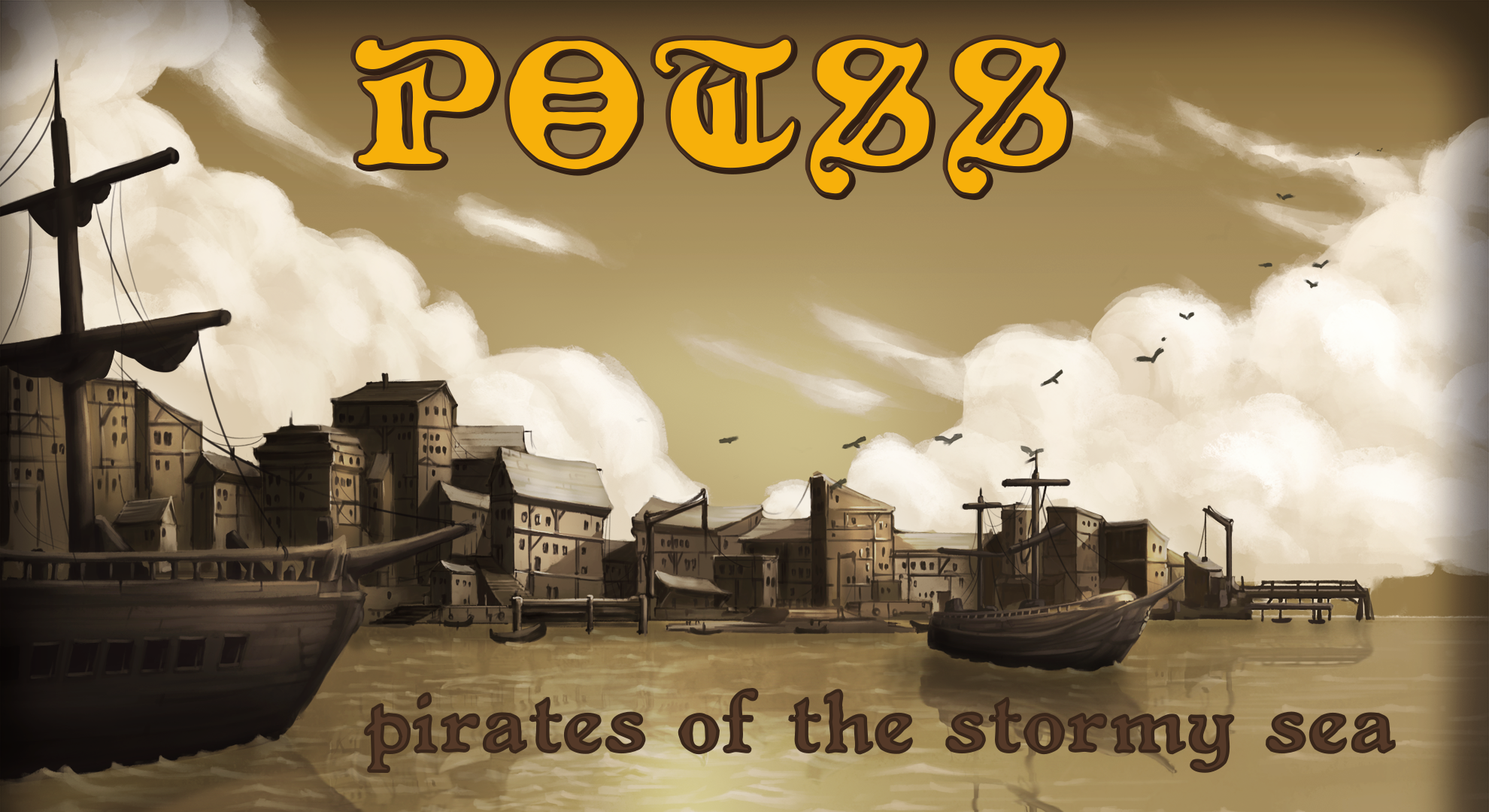 The large-scale game design of POTSS is mainly inspired by FTL (Faster Than Light) and Sid Meiers Pirates. Also details in ship and crew development are based on ideas from RimWorld and other RPGs. My main motivation for creating POTSS was my own interest and enjoyment playing this kind of games. So I created a combination of game elements I like while improving others at points where I felt my favourite games are lacking on depth or complexity. Basically I took games I like, mixed them up and tried creating something I would enjoy the hell out of while playing. The game is designed to be roguelike, each step is final and pausing battle events is only possible in an easy mode. I am aiming for a 90 minutes playthrough time, if the player is actually able to beat the game.

By focusing on fewer but longer and more diverse and strategic fights, I want to prevent the feeling of grinding through battles while giving the player enough possibilities for individualising the ship layout and to support different development strategies to make each game and battle feel unique. 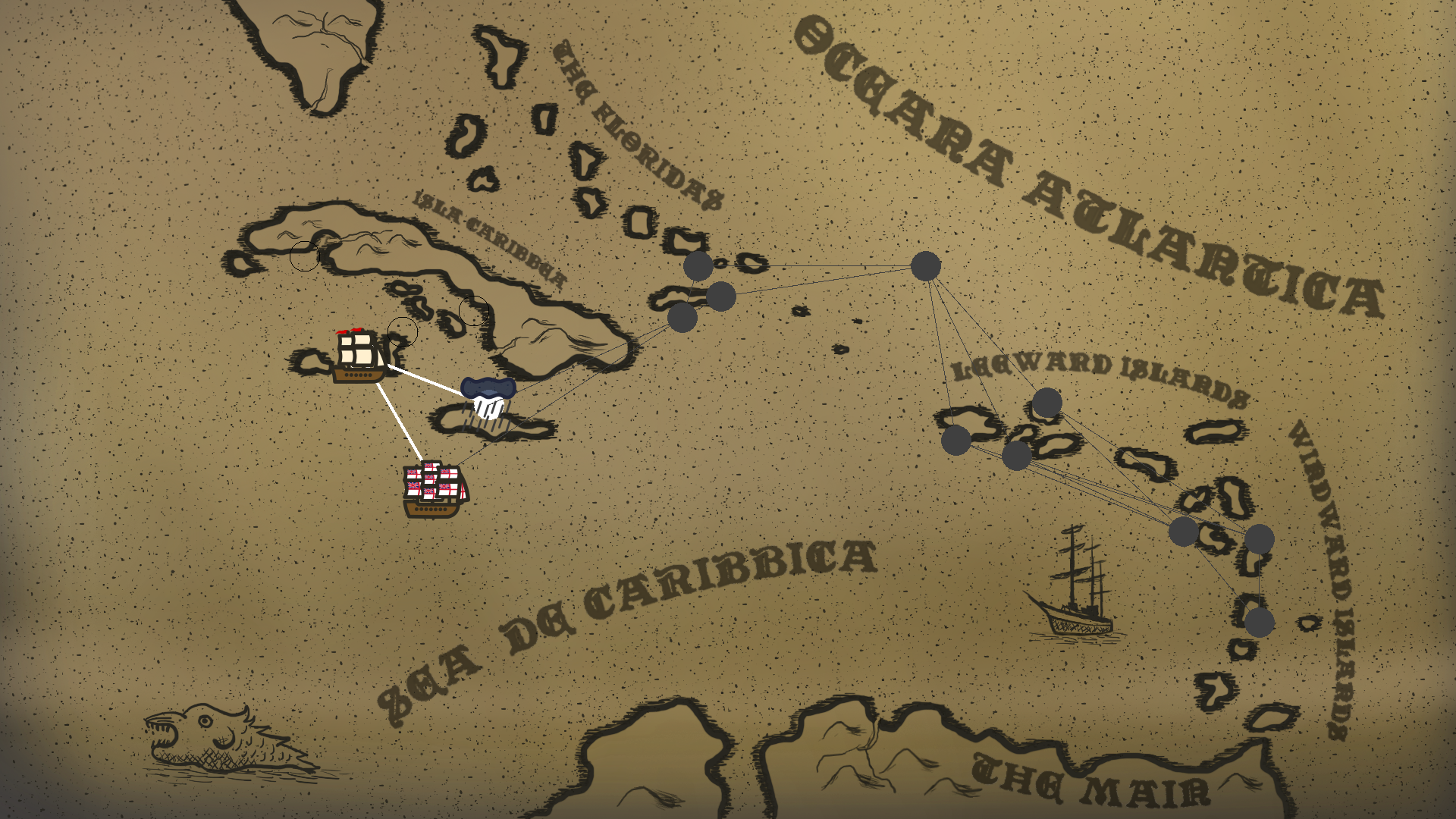 The story of POTSS is set in the Caribbean somewhere around 1700 with a creative take on authenticity. The Player is in command of a free trading vessel with a questionable take on legal frameworks and a complicated relationship with authority. Due to some family misunderstandings the governor's daughter ends up on the ship and the struggle for an escape from the british navy begins. Navigating on a large scale map of the caribbean sea the player tries to reach a safe haven in form of a secret pirate town on a remote island. Each step on the world map opens a randomly generated local map disclosed by fog of war. To complete a local map and proceed to the next step on the world map a quest item pointing to the location of the secret island has to be found. 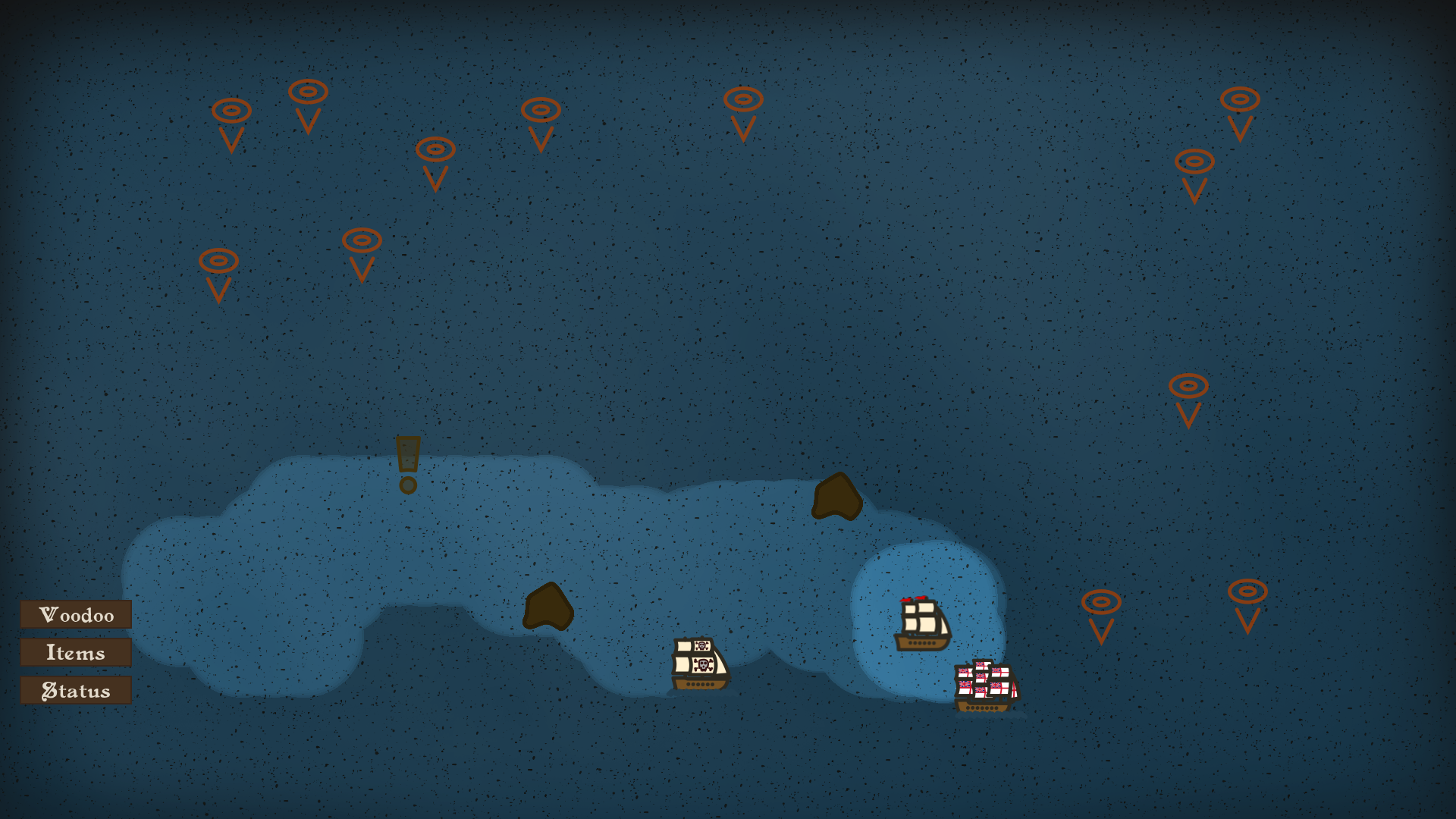 local map with fog of war

While freely exploring the local map the player can have different encounters:

Ships: The Caribbean is full of other captains either hunting the player, trading or trying to make a living by raiding ships and settlements. Each type of ship offers different choices how to interact with them.

Events: There is always the possibility of unexpected things to happen, giving the player the choice how to react and having different probable outcomes depending on this choice and some random elements.

Special Questlines: There will be a set of special quests connecting events on different local maps to additional storylines with great risks but also great rewards.

In addition to this encounters a set of incidents like storms or sea creatures can influence the way the player can explore a map.

During this encounters and while exploring the map the player can use items and voodoo rituals to discover secrets, enhance his ship, as a support or to attack during fights.

skeleton spawning after being called by using a voodoo item 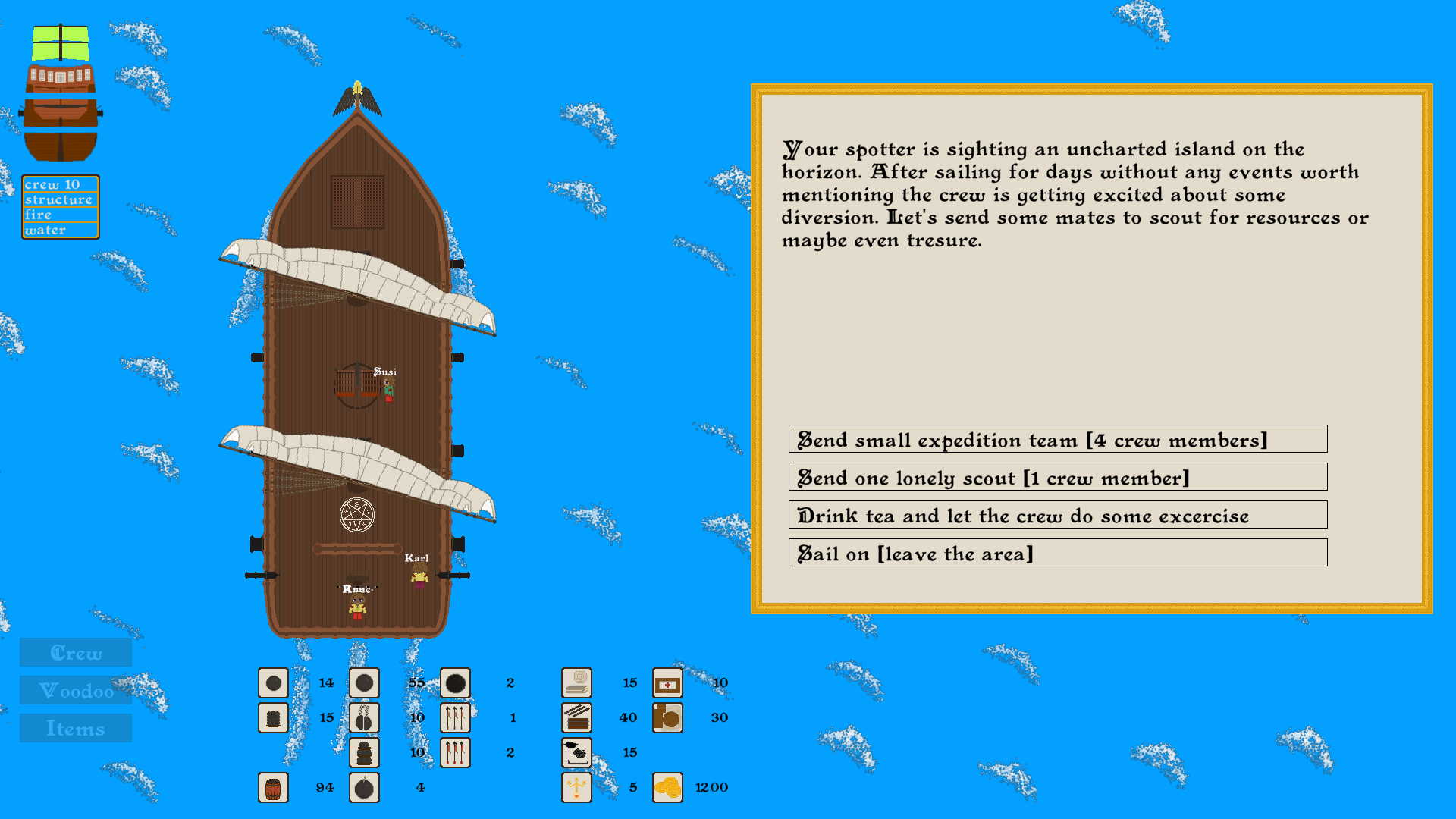 random events give different choices how to handle the situation

When visiting one of the settlements the player can use the opportunity to upgrade or refit their ship build up and buy advanced weaponry in the dock. The local bar offers the possibility to recruit crew members and specialists, make deals with locals, buy items or information, sell prisoners and so on. If available a warehouse is there to offer a large stock of ammunition, crew equipment and material available for trading. 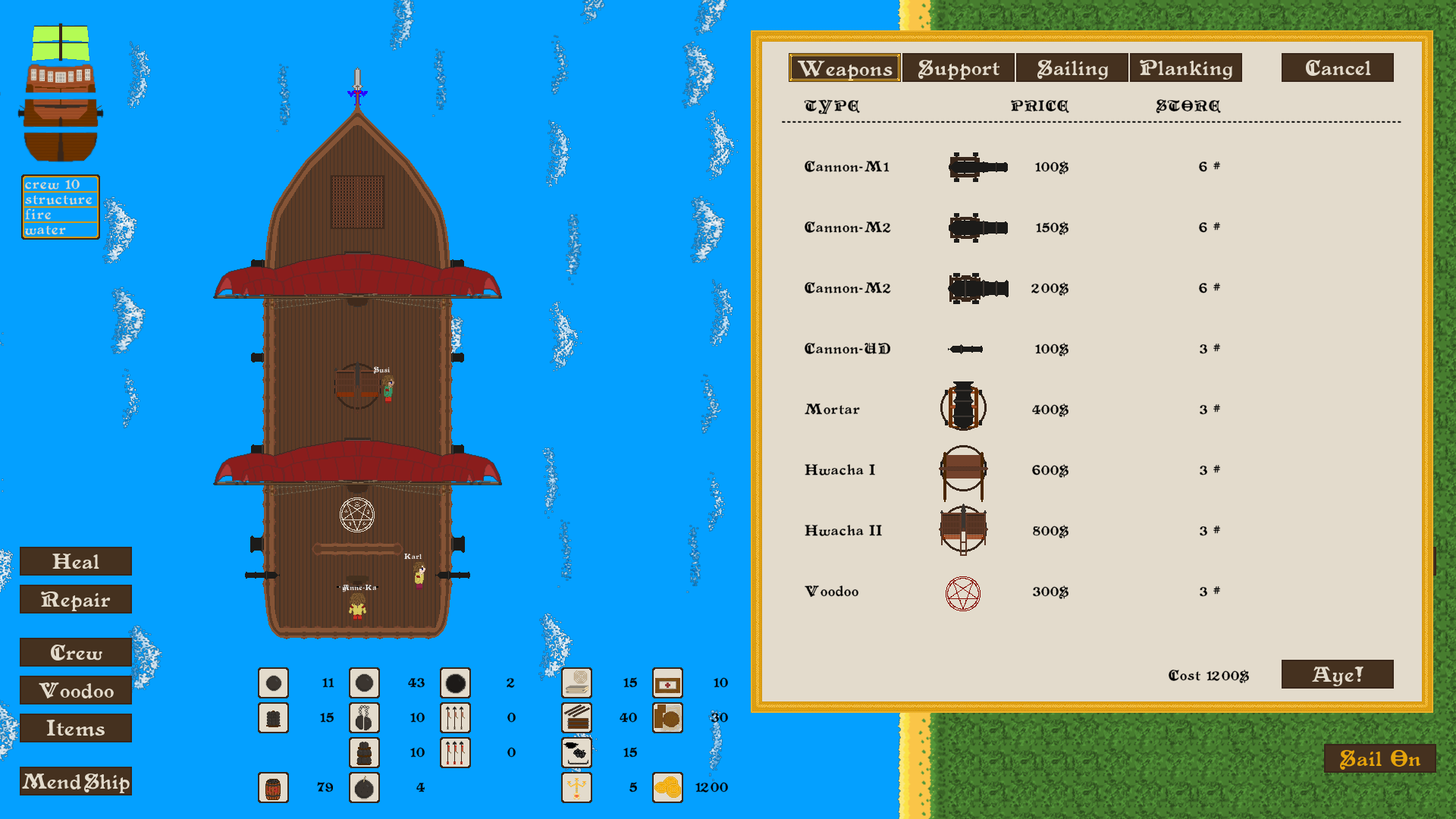 refitting the ship at a dock

Encounters with other ships can take various turns depending on the type of captain encountered and the player’s choices. There is the possibility of trading, extortion and of course fighting. Before and during a fight the player can always try to escape, to change the ship orientation or to engage in close quarter combat (boarding) by sailing a maneuver. Chances for success of maneuvers are determined by ship layout, crew skills and tasks assigned to crew members. The fighting takes place on the three different decks and the height of the mainsails. The upper deck is used for maneuver task, heavy weaponry and voodoo rituals. The cannon deck host the main armament of the ship and different munitions and targeting commands can be issued. The lower deck is mainly used for storage and living quarters but also holds prisoners and bilge pumps. Targeting the mainsails can confine the possibility of successfully sailing maneuvers or escaping. During the battle different mechanics can influence the outcome of the fight. Mainly damage, fire and breaches can destroy a ship but strategically targeting the enemy crew or a successful boarding effort can also lead to victory. During the fighting powerfull voodoo rituals can always change the tide of battle. 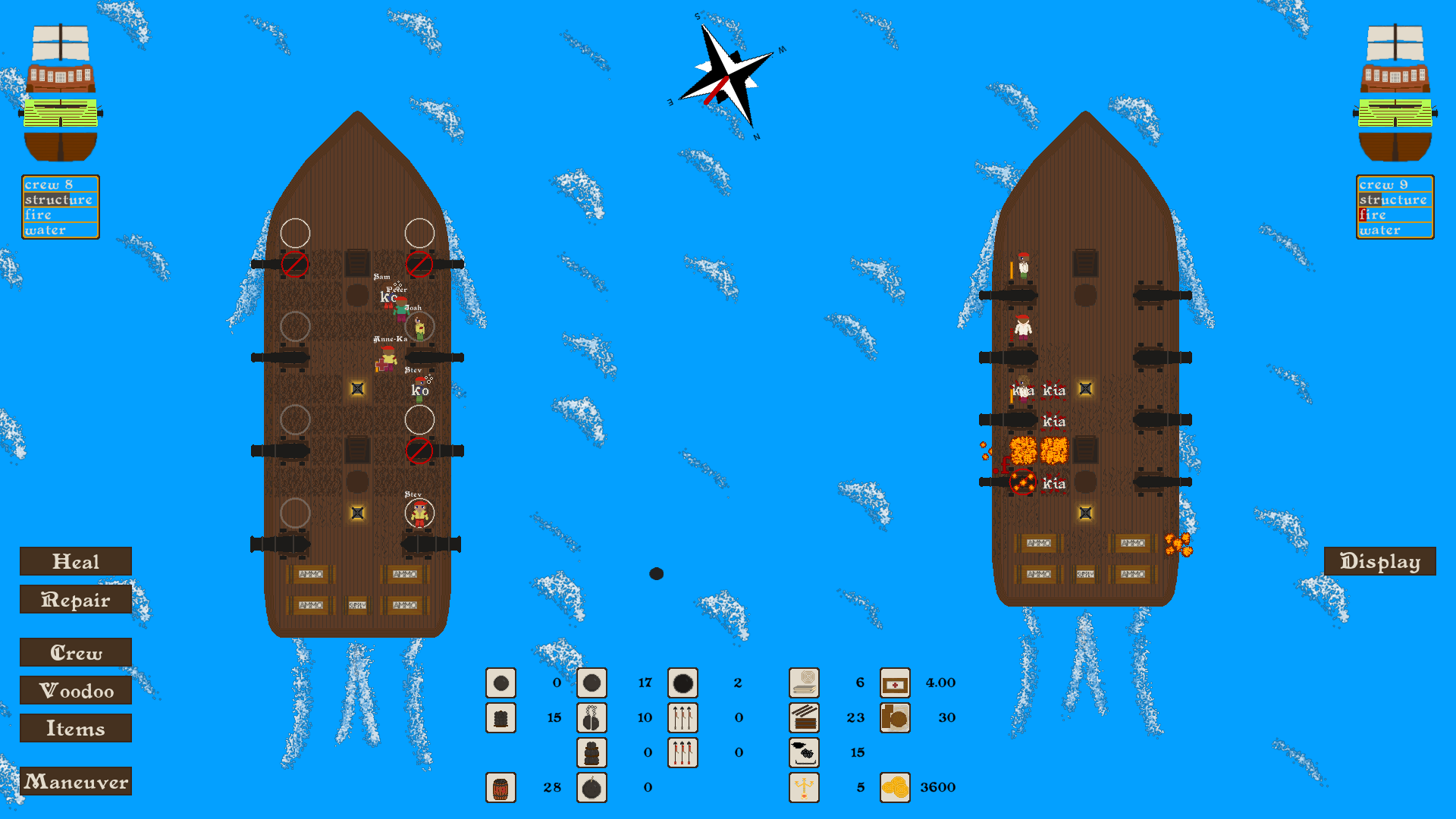 the player in combat with another captain 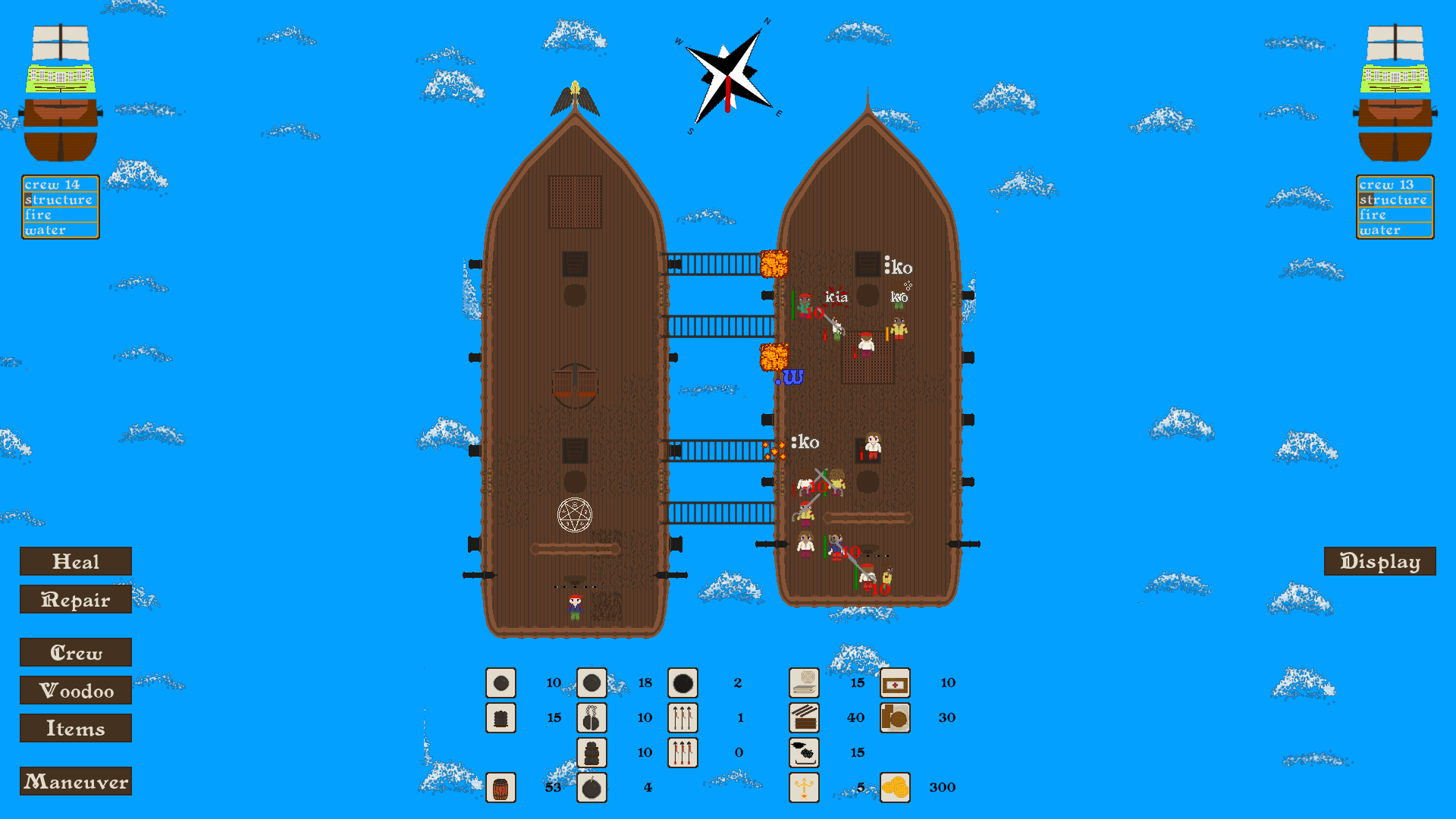 The crew members have a basic AI with all visible tasks and dangers influencing their behavior. Mates make small decisions by themselves and are always looking for something to do but can be overruled by the commands of the player. For enemy ships this commanding instance is governed by another AI making global decisions like battle strategies and crew placement. This enemy captain AI has different priorities stored for different ships and captains and changes strategy in dependency of the state of battle. Maybe deciding to target the crew and to sail a boarding maneuver, trying to shoot breaches in the ship and having it sink or to use flammable ammunition to set it on fire or maybe focusing on voodoo to plague the player with devils from out of this world. This strategies can be countered by assigning mates to medic or repair duty, order them to extinguish fires or man the bilge pumps. 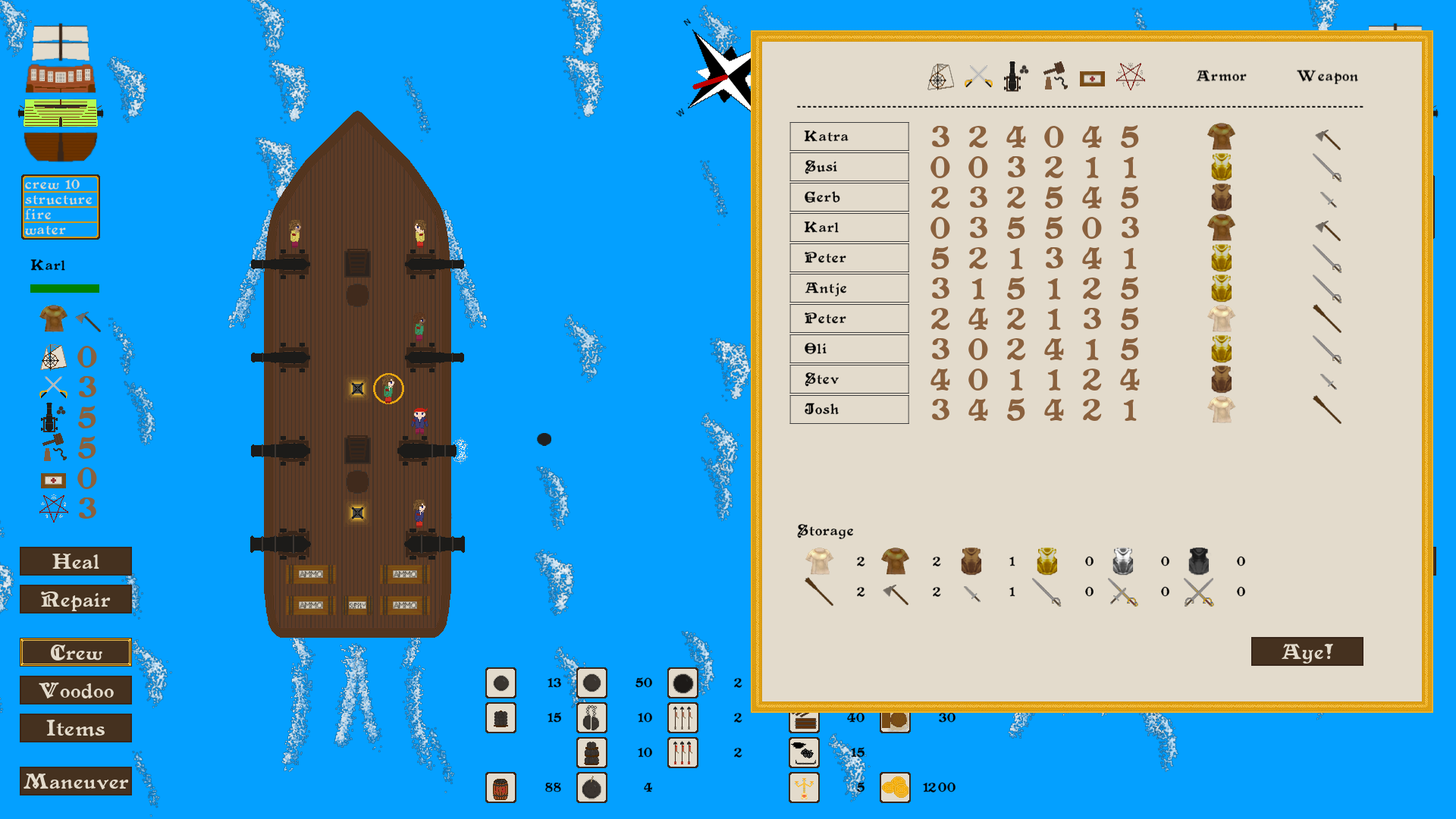 Each of the crew members is an individual character with certain skills and shortcomings. They can learn during their travels by performing tasks or can develop fears or disabilities by being injured. Each mate is equipped with a piece of weapon and some clothing changing the amount of damage they can deal in close quarter combat and modifying the amount of damage they take during ship and close quarter combat.

Hopefully self explaining how2play screenshots for the first PiratesOTSS Demo

The Kickstarter release Demo of POTSS. Including updates, bug-fixes, and some additional content.

Updated PiratesOTSS demo, including Tool-tips, Story, Character Art, updated Sprites, a soundtrack you can not deactivate (yet, use windows volume mixer...

Tags
Embed Buttons
Link to Pirates of the Stormy Sea by selecting a button and using the embed code provided more...

Bounty of One Roguelike