I wanted to release this without development profiles and come up with a website as soon as the demo is done, but then I decided to open a dev profile anyway... thats why its here.
I'm rushing this a little because I want to get it out in december

Alright, now I know that a lot of you don't read this whole text and most of you check out the screenshots first

I just hope that the majority of my fellow gamers here read this...
So: This is not a pure shooter.

I'm aware that it looks just like one of my shooters but it
isn't. ...at all. I go all out adventure on this thing. Of course, it
has gunplay here and there but most of it isn't. So please don't give me
any "oh! another corridor horrorshooter, how unoriginal...baaaah!"
because its not, this baby has a really developed storyline and you will
discover it INGAME. No Virus, no zombies, no secret bioweapons, no
alien-necromorph-thingies.

I have this story thing in a codesnippet because its mostly prestory and
roughly written. And I'm really tired now...my bed is calling me
already.


Please read only if you have a very high tolerance level for awfully formated text.

code:
This game is about the ultimately futile attempt to study an alien energie-form on a distant planet. The planet, Venus, has an extremely dense atmosphere, which consists mainly of carbon dioxide and a small amount of nitrogen. The dense athmosphere made it impossible for former reconaissance missions to gather exact information about its surface. 2048, the "VENERA REVIVAL" Mission discovers massive traces of diamonds in one of the larger Valleys on venus surface. Diamonds where extremely rare after the third world war and an important raw material for spacecraft hulls and energy weapons. However, it took earth's scientists another century to build a functioning and sustainable mining and research station on venus connected to a high end spaceport with almost daily rocketlaunches with cargo full of refined diamonds towards Earth and Mars. (Civil populations being established on Earth, Mars and Titan (not included correction facilitys on Hyperion).
After 20 years in operation, the venus station (Named "Cytheria 2" (1 being the failed first attempt in the 21th century)) became the most lucrative outer space installation of mankind, however, suicide rates where alarmingly high and 1 out of 5 employees suffered from sudden bursts of irrational fear and sickness. 1 out of 20 admitted being a victim of a series of nightmares containing suspiciously graphic violence towards fellow crewmembers.

Most outer space research, resource or development facilitys had these problems... Working on a dead planet far away from home for an extended period of time had its side effects widely known as "Dead Planet Sickness" however, the sheer amount of incidents on venus was alarming.
Violence increased in the mining sectors and after a couple of violenct incidents security got tightened making Cytheria 2 the first outer space mining and research facility that has a security force armed with a wide range of autmatic weapons.

As you can imagine, the amount of disturbance on the station had its source.
Scientists discovered signs of a vast but strange intelligence, which can create physical phenomena in a way that science has difficulty explaining.

The game begins with the awakening of the protagonist, Victor Salenko, from cryostasis. Suffering from severe amnesia, a side effect of longtime hypersleep, Salenko wanders the abandoned corridors of the station searching for answers to his identity and the fate of his coworkers.

Secret-research has been ongoing for years, but scientists have been unable to do more than observe the highly complex phenomena that seems to have been present for millennia but grows stronger and feeds on human lifeforce. All the while classifying events and sightings into an elaborate nomenclature without understanding what they actually mean. The discovery of an alien artifact on a new mining site gave new strength to the alien conciousness allowing it to manifest itself and taking over the station. Salenko finds himself weak and helpless on a deserted outer space station, has to face an unknown hostile force and uncovering his very own painful past.


You can keep any grammar mistakes you can find, no porto. 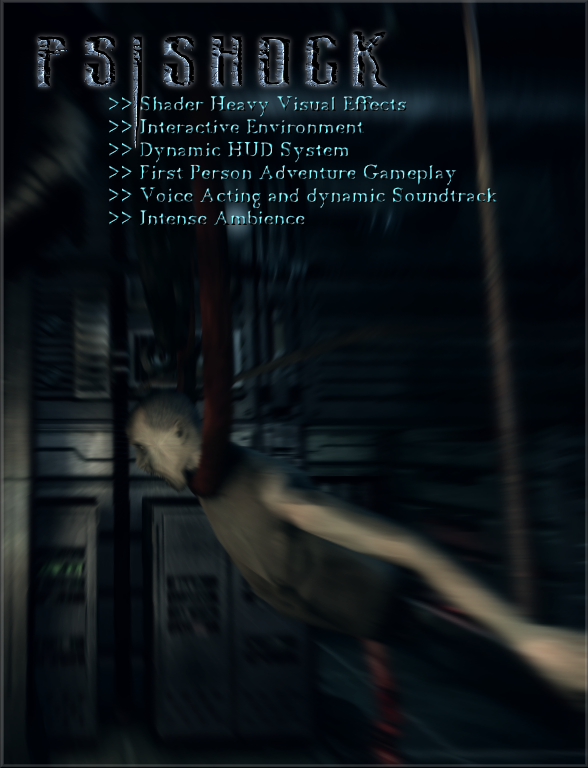 Hey there! Time to update some really awful news.

Those of you who use FPSCreator aswell know how I feel right now, those of you who do not probably think that I'm just a really bad gamedesigner. Either way, I sadly have to redesign the entire concept of Psishock.

Did anyone on here play "Euthanasia"? If you did, you might remember a huge pile of error messages and random shader failures...thats exactly what I'm dealing with in PSISHOCK. This and the constant Memory Cap filling up with the smallest possible levels. I simply can not hold on to that level of visual quality and to be honest. With games like deadspace, system shock and doom³ around...most people do see this as a rip off which is really annoying if you actually try to tell an interesting story. I keep this plot to write a novel later this year but until now it gets rewritten to work in a non-space scenario.

You see, a game where the average level takes 3 to 4 minutes to complete is not fun. A game where you just drag the gameplay with repetitive key puzzles to 10 - 15 minutes sucks even more.

I'm really sorry to fail again, but believe I'm trying. I really don't want to release another dry shooter as Euthanasia and it is very likely that Shavra gets a release before Psishock.

This Indiedb profile will be redesigned soon.

After a short break, PSISHOCK is still in development. And it turns out to be a lot scarier than planned.

I really like the look of this game :) Although reading the description does make it sound very loosely inspired by Pandorum (The Hypersleep thingy and searching for his identity and the fate of the crew members) but at the same time it meets Dead Space :) I think this game seems very promising.

pandorum was such a good movie

Thank you! I look forward on picking development back up in 2013 and flesh this out a lot more :)

you got featured in dsogaming, congrats!

This game will probably be popular!

First thing I noticed about this project was the name. Psishock. Simliar to Bioshock or System Shock. Then I looked at your screenshots, very system shock-esque. Are you getting a lot of inspiration from these games or is it just an bad coincidence that they both share the same ideas?

I only say this because so many people are comparing it to Dead Space and Doom yet System Shock is the closest most obvious comparison.

Well, Psishock didn't come to my mind at first. On the mind map its still callen "the aphrodite complex". Later titles where also Venus related and wierd until "Psishock" came to mind.

I know that a ton of people will think now that its a system shock rip off, but I really do not care.

I took a look at system shock on youtube but I never owned a copy so I cant say that it got inspired by it. Most inspiration comes from scifi movies and novels for the story. The gameplay itself got inspired a bit by call of ctuhlu. I really try to make it as fresh as I can in FPSC ...and thats not easy :P

Wolf is me, for those who dont know :D