Click here to play the game online. We suggest you hit Full Screen mode in your browser to enjoy the game!

The game places you in the role of God as you take to looking after Globs – cute little round blue beings whose role in life is only to blink (and to reproduce, of course).

You cannot directly manipulate Globs, but you can shift the green-colored earth that they walk upon. The objective in the game is to use your mouse and drag the green tiles from under your Globs so that they can meet somewhere in their small confined game world of Globbledygook.

That’s right – to increase your population of Globs, all you have to do is to bring them together. After a while, a Glob becomes pregnant… and after a violent explosion that kills the Glob, new happy Globlings are born somewhere else into the world.

Clicking on any of the Globs will show you their current Hit points, Energy level, and thoughts. Try not to deplete their HP/Energy levels or Globs will shrivel up and die.

You will also want to drag and drop green tiles one top one another. Here are the possible things you can build:

However, you must be wary as “food” and “ladders” cannot be moved around in the level.

There is a plus button in the game if you wish to see a close-up of the action. Use the WSAD keys while you are in this mode. Scroll to the upper right and click on the minus button to return to the normal view.

You win the game if you manage to get a total population of at least 200 Globs!

Can a minimalistic simulation game be any fun?

[Posted verbatim from the original source over at Gamasutra.]

When I first thought about creating a minimalistic game, it was more to showcase to others about the prototyping services that I offer. But Nurture - my minimalistic colony simulation game - did take on a life of its own as people on the forums were rather intrigued by the gameplay concept.

Ultimately, the game turned out to be quite a fun little gem to toy around with... and here is why -> a well-designed minimalistic game can be a quite a power-packed package of fun.

After doing some preliminary research, I decided that I would try my hand at making a life simulation. I could have chosen to write a business or other serious simulation, but it has been some time since we have saw anything remotely close to Creatures or even something simpler like Tamagotchi. Let alone, one that would be minimalistic in nature.

I decided that the player would not be controlling a single entity (as in the former game), but instead several entities would populate and wander about a small confined world filled with random tiles. In a befitting salute to Molyneux's Populous, I christened my game - Nurture.

Then it was off to dream up a crazy background story to suit the circumstance. 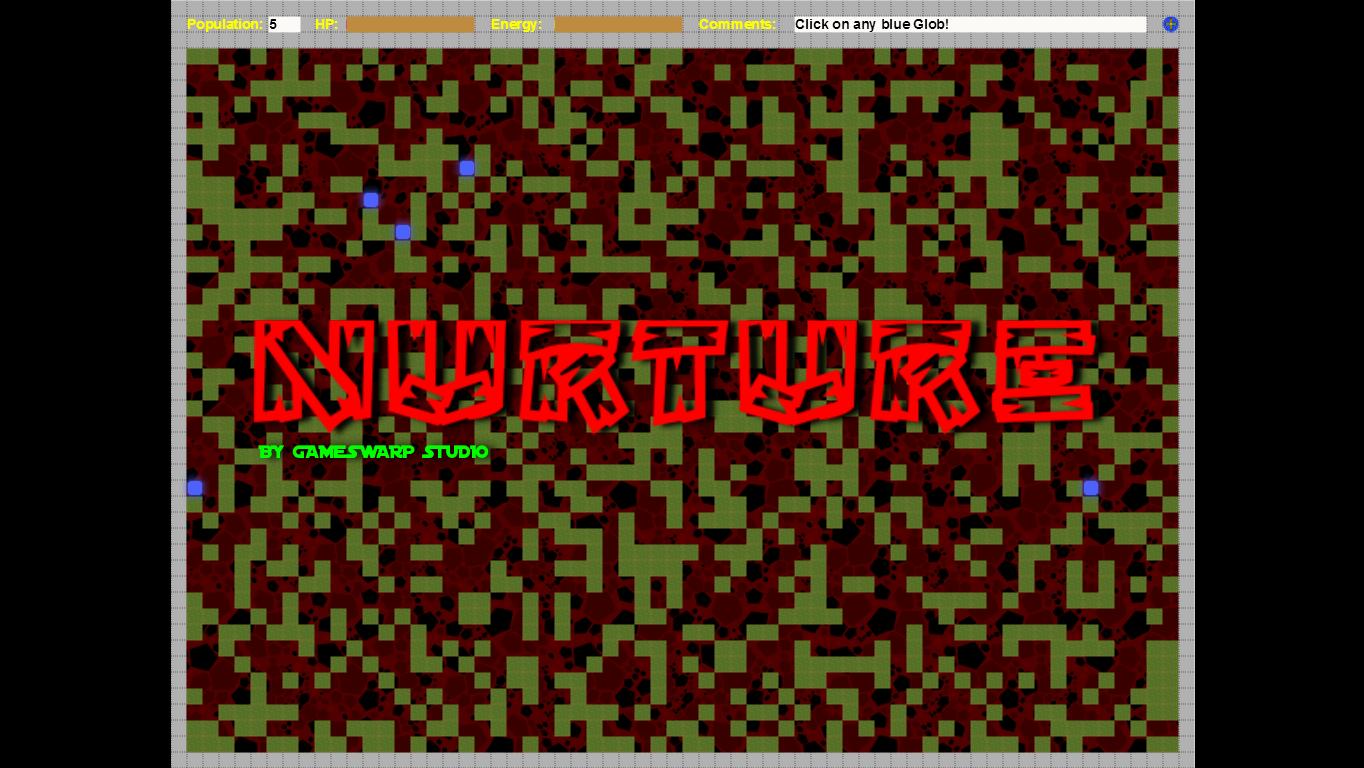 I must admit I had a little fun here... so this is how Nurture was brought to life - inside the fertile imagination of a self-confessed game junkie.

"The game places you in the role of GOD as you take to looking after GLOBS – cute little round blue beings whose role in life is only to blink (and to reproduce, of course)."

Why cute little round blue beings - you might ask? Well, because they are the easiest things to draw this side of the galaxy... and after all - it's supposed to be a minimalistic game.

"You cannot directly manipulate Globs, but you can shift the green-colored earth that they walk upon. The objective in the game is to use your mouse and drag the green tiles from under your Globs so that they can meet somewhere in their small confined game world of Globbledygook."

This is perhaps where I got truly creative and came up with a unique selling point for Nurture. Why dig around the way you do like in the sandbox games of Minecraft and Terraria... you are playing the role of an almighty omniscient being after all.

So, how might such a supreme person create stuff? Why he picks them up and drops them on something else, mixes them up in his palm, and a new object appears in its place. A neat little concept that explains the need for dragging and dropping the green-colored tiles you see in the screenshots. By placing a green tile on another, you magically create yellow food pellets for your Globs - as simple as that. 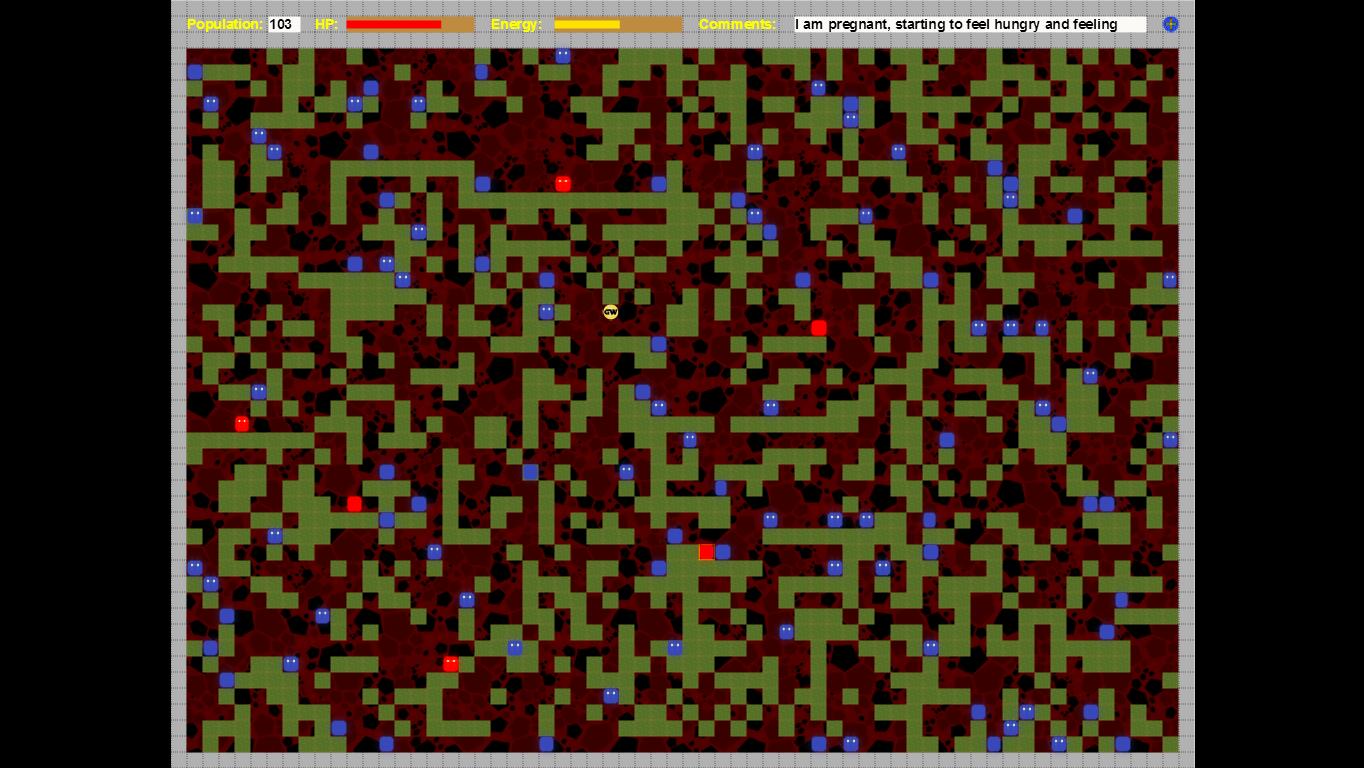 The Nature of Nurture

To develop Nurture as quickly as possible, I embarked on using the Construct 2 game engine. My target would be an online audience, and if the game got positive vibes, I would then simply port the concept over to a mobile platform.

The game world would be confined to a single screen and tiles were deliberately made smaller to make the world of Gobbledygook look huge from the point of view of the lowly Globs. The player will not be allowed to manipulate Globs with his mouse, but he could take out the floor from under one and the poor little Glob would drop away into the abyss that opens up below them. Because of this mechanic to gather Globs together, I decided to make the Globs invulnerable from falling.

The Globs would take on only two parameters that would be visible to the player - Hit Points and Energy. A third one known as Fission would be hidden from the player; this latter game parameter would determine when a Glob is ready to reproduce. Globs get "pregnant" by colliding into other Globs, and when the time comes... the pregnant being would die, but at the same time give birth to 3 more Globs somewhere in the confined game space of Gobbledygook. 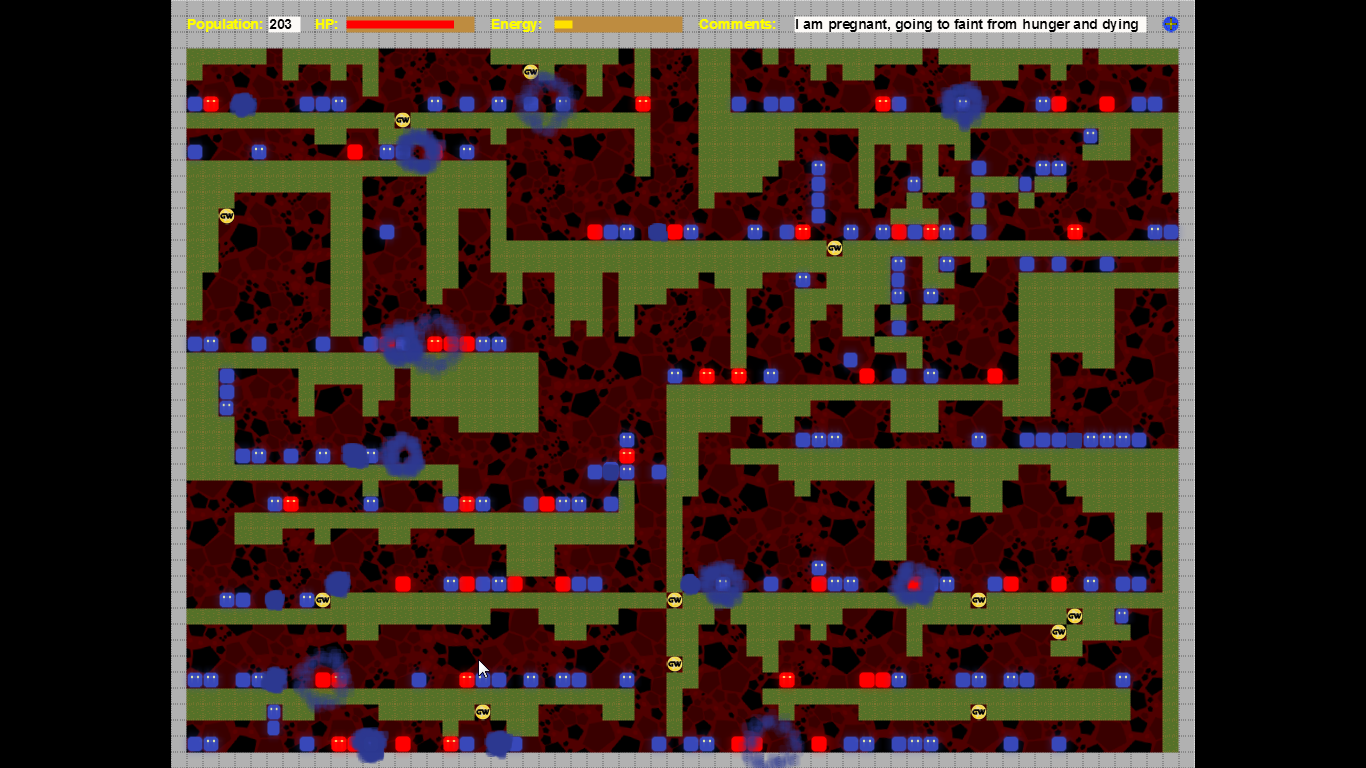 To set a reasonable objective that the player would want to meet, I decided that the player would need to grow and nurture his colony of Globs until he had 200 of them. That seemed plausible enough for a five to ten minute spurt of fun. Sure, I would not be using the complex algorithms of Conway's Life, but there should be enough gameplay inside of Nurture to interest players.

Once the game was done (after a very short development time of say two full days), I went ahead to advertise news about the game on the game engine developer's forums. Surprisingly, the game met with some interesting feedback - most people were rather pleased with the drag-and-drop concept of creating your own tiles.

To expand gameplay, someone offered a simple suggestion - introduce ladders. This would change the game dynamic quite a bit, since Globs only wander left and right upon our first release.

Adding ladders meant I would have to come up with a slightly more complicated construction chain... and here was how it went:

A construction chain comprising only two levels. How much more minimalistic can you get from something that is already simple to the core? 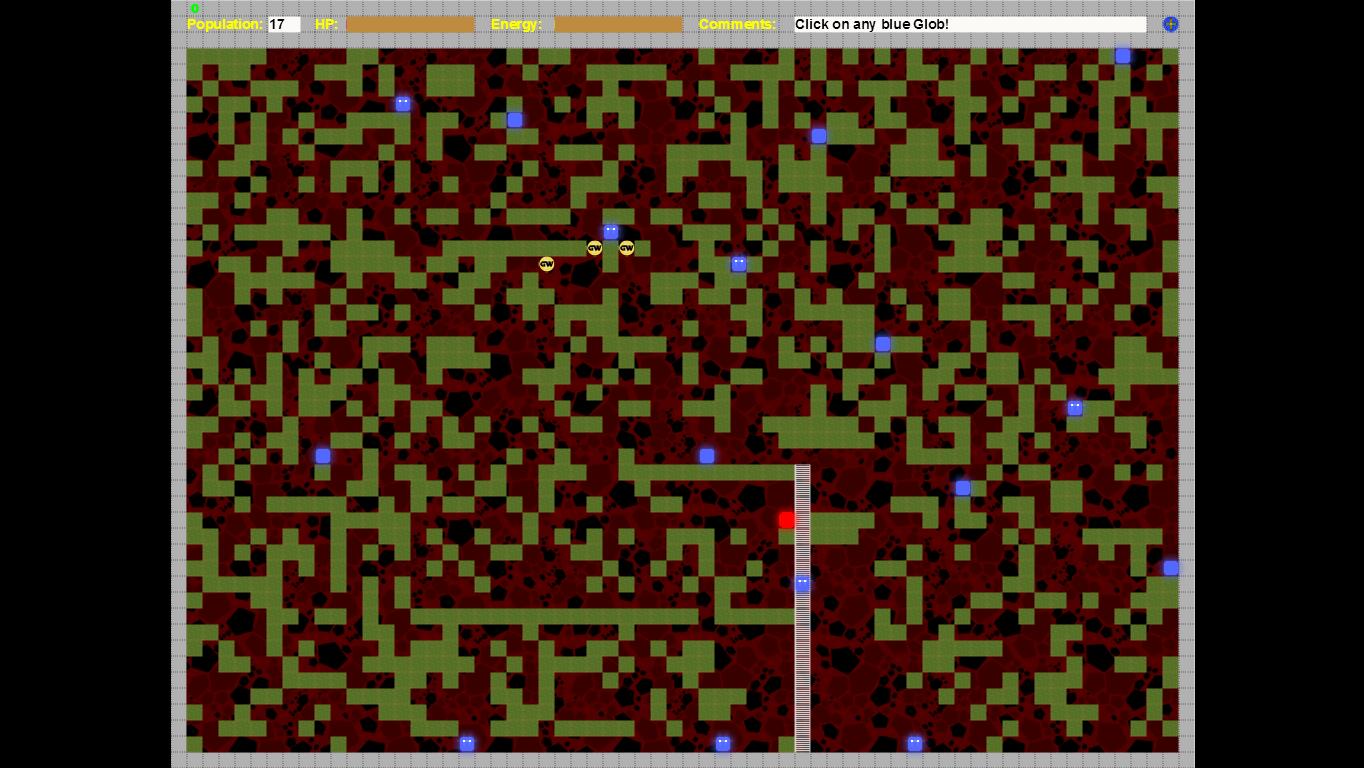 Being a tile-based game constrained to one screen (suited for release on the iPad in the future), my final choice of tile size at 32 by 32 pixels was just a bit too small. Unless you were zoomed in, a player would it find it tricky to pick tiles and drop them on top of one another. So, I added in a quick and dirty zoom-in function that would hopefully alleviate this problem slightly.

Another problem was to give players meaninful feedback. I was not going to design a huge window to show the thoughts of every one of the Globs. Instead, the player can select a single Glob and pry into the thoughts of that single entity. The so-called "thoughts" were simply based upon the band that the Glob's Hit Point and Energy were in. As an afterthought, I decided to add in some humor - pregnant Globs would comment they were pregnant and also turn a shade of embarassing red.

But, the fundamental question was whether a minimalistic game would be any fun to play? With only five to ten minutes of gameplay time, would it even keep the player rooted to the screen?

Well, based on feedback I gathered from friends and other professionals... I think I achieved that!

Ahh... the joys of a minimalistic design. All wrapped up after three days, and on to the next project, I go. The joys of being indie.

Good luck ! It's good to see developpers with conceptual ideas, and I'll be tracking !

When I read your last statement it seems like the game is finished and possible to play, but cant find a play button link or a download.
post a mail here if its true ( dont get info when someone answers my posts)
Would really love to play it.
Cheers!

is it pictures of someone defragminting their harddrive ? :)
seems interesting actually...I played ADOM a lot and know that
graphics dont show fun. keep it up :)

Do Not Feed the Monkeys Virtual Life