Ninja Pizza Girl is a serious game about self-esteem, bullying and resilience – and pizza delivering ninjas!

Its deeply-woven story follows Gemma, a sixteen-year-old girl working as a pizza delivery ninja for her father’s independent Pizzeria. In a world where slums teeter on top of skyscrapers, where powerful mega-corporations exploit the poor and where quality pizza is hard to come by, Gemma must fight to keep her ideals, her family and their business intact in face of the most merciless enemies known to any teenage girl – other teenagers.

Ninja Pizza Girl. For Honour. For Family. For Pizza.

Our last week on Kickstarter - yay, woohoo and so much thank-you :D

We reached our goal with 38 hours to go, which sounds like a comfortable margin, but it felt right down to the wire! 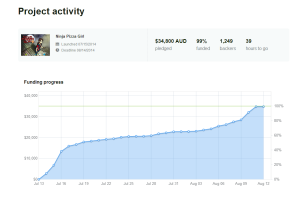 Kickstarter has been a hell of a ride. I feel incredibly lucky. I thought we were prepared, going in, but with the benefit of retrospect we really weren't and without the support of our friends, family, our backers, and some wonderful members of the games industry and games press who connected with our story and our message we would never have made it.

Our backers supported us in amazing ways, from carrying our stuff to tweeting about the game, to doing lets plays and posting links on their favourite forums. Travelling around the world and hugging each and every one of them probably isn't practical, so we figure the best way we can thank all 1404 of them is to get to work and make Ninja Pizza Girl the best we possibly can.

The kickstarter predictors only reached a consensus about 20 hours before our campaign finished. By that time even I was fairly confident we were going to make it! Future kickstarters, you really should avoid them all together, but you probably won't so you should know that Kickspy was by far the most accurate, and seems to account for the U shaped curve of bipolarization the best.

Oh, and one more thing I wish I'd known going in, only 16 percent of our backers found us on Kickstarter. We tried to err on the side of not being spammy, but you really do have to work hard and get your message out there and keep it circulating all month, it's the only way people are going to find you. 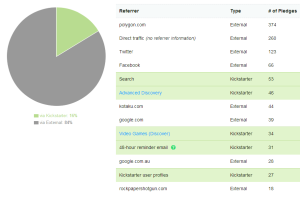 Our third week on Kickstarter and Greenlight

Our second week on Kickstarter and Greenlight

... there is also love in world, or our second week on Kickstarter and Greenlight.

Our first week on Kickstarter and Greenlight

Our first week on Kickstarter and Greenlight - halfway there?

Ninja Pizza Girl is live on Kickstarter and Greenlight!

For all of you who can't make it to Melbourne for PAXaus, here's the demo build we'll showing off. It's the same two levels as the previous builds but...

A serious game about bullying, resilience and pizza delivering ninjas. (Just a quick fix, game was breaking when v-snyc was turned off.)

To ease our crowdfunding jitters, we thought we'd release a playable demo. We really appreciate people checking it out! Kickstarter, next week, eeeeeeeeeeekkkkkkkk...

Looks really nice! Is the Wii U version already set in stone or will you ony do it if you hit a certain stretch goal on Kickstarter?

Thanks :) WiiU is a definite, but it might take a little while if we don't raise enough on KS to get another coder in.

Thanks for replying! Looking forward to the game on Wii U! :D