I think we can scrap the weekly update eh? Well anyways. We would like to show some new things, including an official Linux version of nz:p, and also, to spam you with VOTE VOTE VOTE for dashhacks voting. 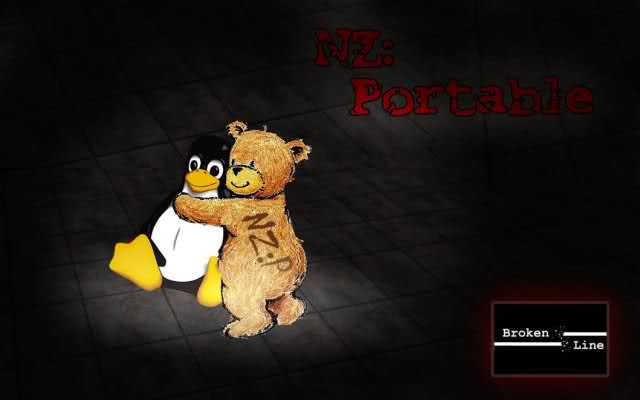 You may notice it says PSP, PC, Linux.

So if you didn't get this. Nzp is coming to Linux now (hopefully)

Well linux fanboys. You may had seen this weird game in your page. Don't worry, Come in and soon you can enjoy this nice clone of nazi zombies game mode from call of duty world at war and black ops made on quake.

And here is a a little screenshot of NZ:P running on Linux: 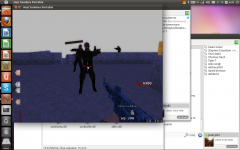 Well, We have done a lot of other things as well. Blubs started working on a new verruckt. We have done body part gibbing. Whic is a little buggy on the psp (we have yet to fix the bugs). Also we have added in the type 100 (and samurais 1001) in. We have changed the colts pack a punched counterpart to the Mustang & Sally, instead of c-3000. Well we also have multtilayer in psp SOMEHOW working. It still needs a lot of fixing though.

Also some of you have noticed something about broken line studios, bls or broken line. Well we came up with name for us. Nowadays, nzp team is called broken line studios. Why not just npz team. 1) it adds a little professional feel 2) the logo is cool 3) for other games we might develop later on, we want to keep same name. More info about bls here: Nazizombiesportable.wikia.com logo and list of devs too :)

Wait whats this? Nazizombiesportable.wikia.com Well a fan-whose-name-i-cant-remember-now-in-22:22 (or 12:22 pm, stupid America) decided to make a wikia for nzp. We have been thinking about making one. So we have adopted this as the official wikia of nzp. Visit, edit, make and enjoy. Lets hope it grows bigger and bigger :D

So no VOTE Spam? Well, since you reminded me

Please VOTE for nzp. we have only 2 days until voting ends and this is going to be a fight. Obey the rules and dont cheat. But tell ANYONE you know to vote. We seriously are in need of psp, I mean money. This money is put towards our website so we can keep it running, AND PLEASE do not cheat, they see it and we lose it. link here Forums.dashhacks.com

And you probably ingonred it since the log in. Well shame on you.

got it? good. now here is a cookie :D

i'll call all my friends to tell them to vote

CAN u guys add a m60 or the death machine?

Death machine maybe, m60 could possibly come later, but we're not going to work on black ops until we have all 4 original maps done ;)

lol, the guy with the same picture as me is making der riese

how dare you not remember my name lol :P

dual booting is pretty easy...how come you say "finally managed"? for expert coders like you guys i would expect it to be a piece of cake :)

Well, i had some problems. Like my hdd didnt want to shrink because it was so fragmented, and i probaply run like 100 diferent programs for it. Then i found out i had to use alternate install cd and had some problems with it

thank you i have linux

Guys i was playing nzp with my cousin, and everytime one of us died it would automatically end the game. (scoreboard would not go away) is there a way to fix this? or maybe a fix in the next patch?

Hey, do you guys know how to play multiplayer?

The game is amazing. Do you guys have a donation page? I would gladly donate. I only have one problem with the game: bullet penetration please?

i saw your video tutorials on youtube, and i gotta say that your voice is somehow sexy lol. you Rock!!

i have the sounds from the power ups
download at :http://www.sendspace.com/file/777hma

Keep Up the great great work, I just found this game yesterday and I'm amazed at how awesome it is so far!!!!! (PC ver myself)! I too would donate to the cause. This is an amazing re-creation I truly truly hope this keeps getting dev'd for the PC (me and a few frends alike, since we don't all have xbox gold). With Gfx almost maxed (and lighting tweaked) this game is seriously more than I expected at all for it's engine and limited resource/time crew!

That Linux Penguin looks scared!
Oh and are u guys sure the bear is not the one ''Pedobear''?
I mean he could be some kinda penguin raping bear!
But still...Good work...I dont know to who the bear or you nz:p dev's!

Multyplayer For Psp Anyone??? So Confused -_-