Experience a Loco top-down Battle Racer packed with Piñata Stampedes, Avocados and mayhem for up to 4 Players! Must Dash Amigos is a humorous, family friendly fun-fest with controls so simple that anyone can play!

Leave rivals eating your dust as you blaze past them in Race Mode! Dish out the damage in Battle Mode to prove your might! Compete in Tournaments to truly uncover the worthiest champion!

To survive in this world you cannot just run; you Must Dash Amigos!

Outlast your opponents as you dash through hazardous environments on foot, grabbing weapons and powerups along the way! Race your amigos amidst explosions, stampedes, and all-round chaos! Those that can't keep up are eliminated from the current round. Win rounds by being the last amigo standing; win enough of them and you will be crowned as grand champion!

Face your foes head-on in a battle arena! Use the weapons at your disposal to annihilate your enemies, and tactfully trigger powerups to avoid being wiped out yourself! Get hit 3 times and your amigo will be momentarily eliminated before being thrust back into the action. Players get points for causing damage to their opponents; the amigo with the most points once the time runs out is the winner!

A series of events, either Races alone or both Races and Battles, that will truly test your stamina and skills against your amigos. There are 18 different Tournaments to choose from in total. Winning a Tourney truly cements your status as a champion amigo!

Every racetrack has its own Challenge for you to overcome! There are 3 different types of Challenges for you to master:​

Guide two amigos at once around the racetrack with a single controller! You must get both of your amigos safely around a single lap before the time runs out.

Hot on your heels from the get-go is the dreaded Evil Stampede! If it catches you then you're toast! So run fast and complete a lap of the racetrack before that happens.

Only the speediest of amigos will be worthy of this challenge. Catch the Mystical Piñata (which, doesn’t want to be caught by the way) before the time runs out!

Truly test your speed in Time Trials Mode. Each racetrack has a Bronze, Silver and Gold target-time for you to aim for. 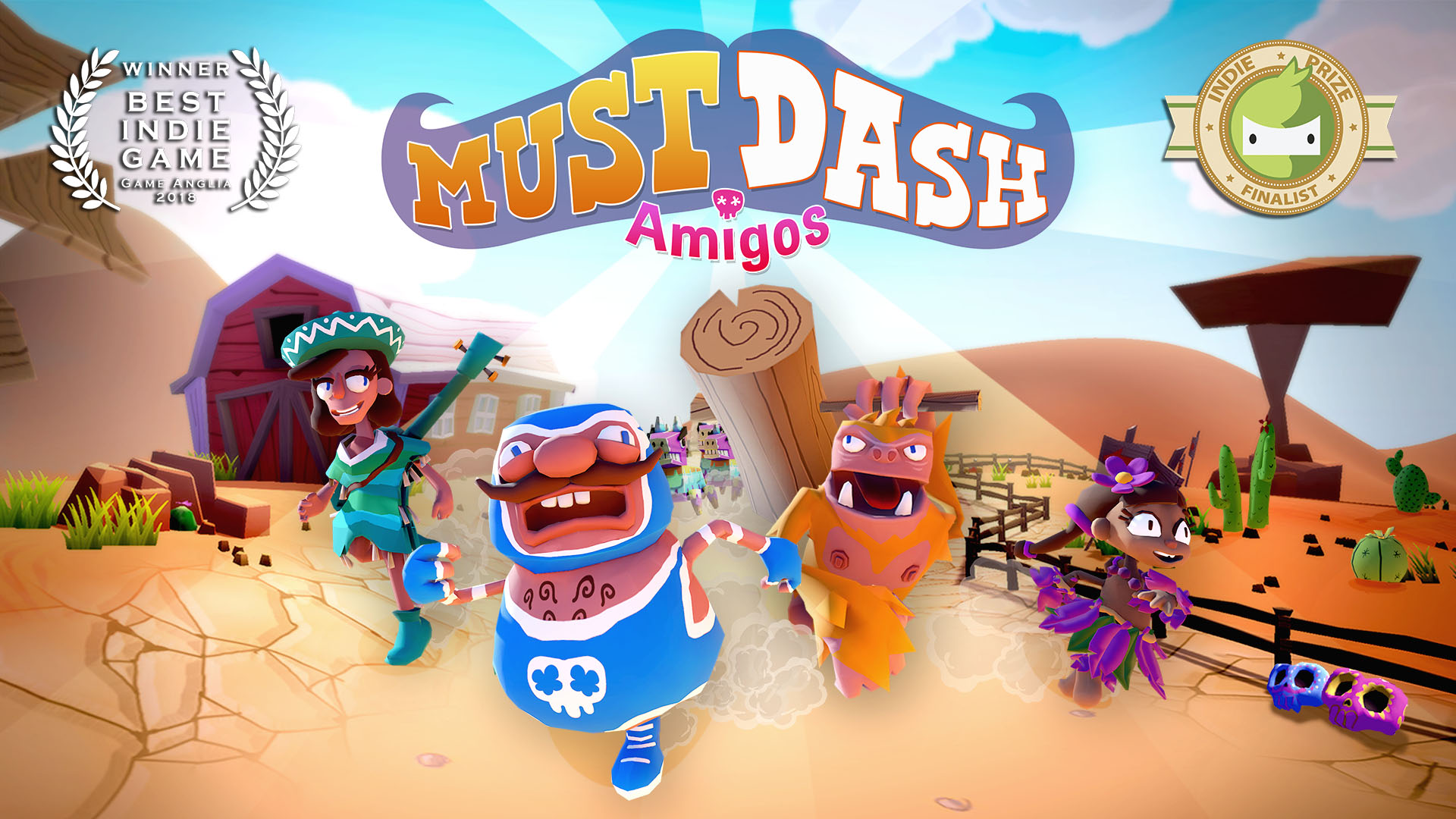 New UK Indie Studio miniBeast Games have released their debut title - Must Dash Amigos - on Steam. The two-man team consists of one former Jagex Employee, Ben Lowther, and Anthony Brunton-Douglas who is still working full-time for the large Cambridge based Studio. The pair, who met in 2011 whilst working on RuneScape, both began as Quality Analysts with Ant progressing into a 3D Artist role and Ben going on to become an Associate Producer. Must Dash Amigos - a vibrant, humorous battle racing game filled with Piñata Stampedes, Avocados and a drop of Tequila - all started following a Jagex Game Jam back in 2015. With the blessing of Jagex the pair continued to evolve the title in their spare time, with Ben taking the plunge to become a full-time Indie Dev in January this year. They have now released their first ever game, with an Xbox One version to follow on 7th August, and a Nintendo Switch launch later in the year.

“With just over 500 people attending on the day, a record breaking 28 indie games appeared at the show. Once all the votes were in and counted, the Indie Showcase ‘Game of The Show' award went to the hugely addictive and hilarious racing game ‘Must Dash Amigos' by miniBeast Studios” - Game Anglia 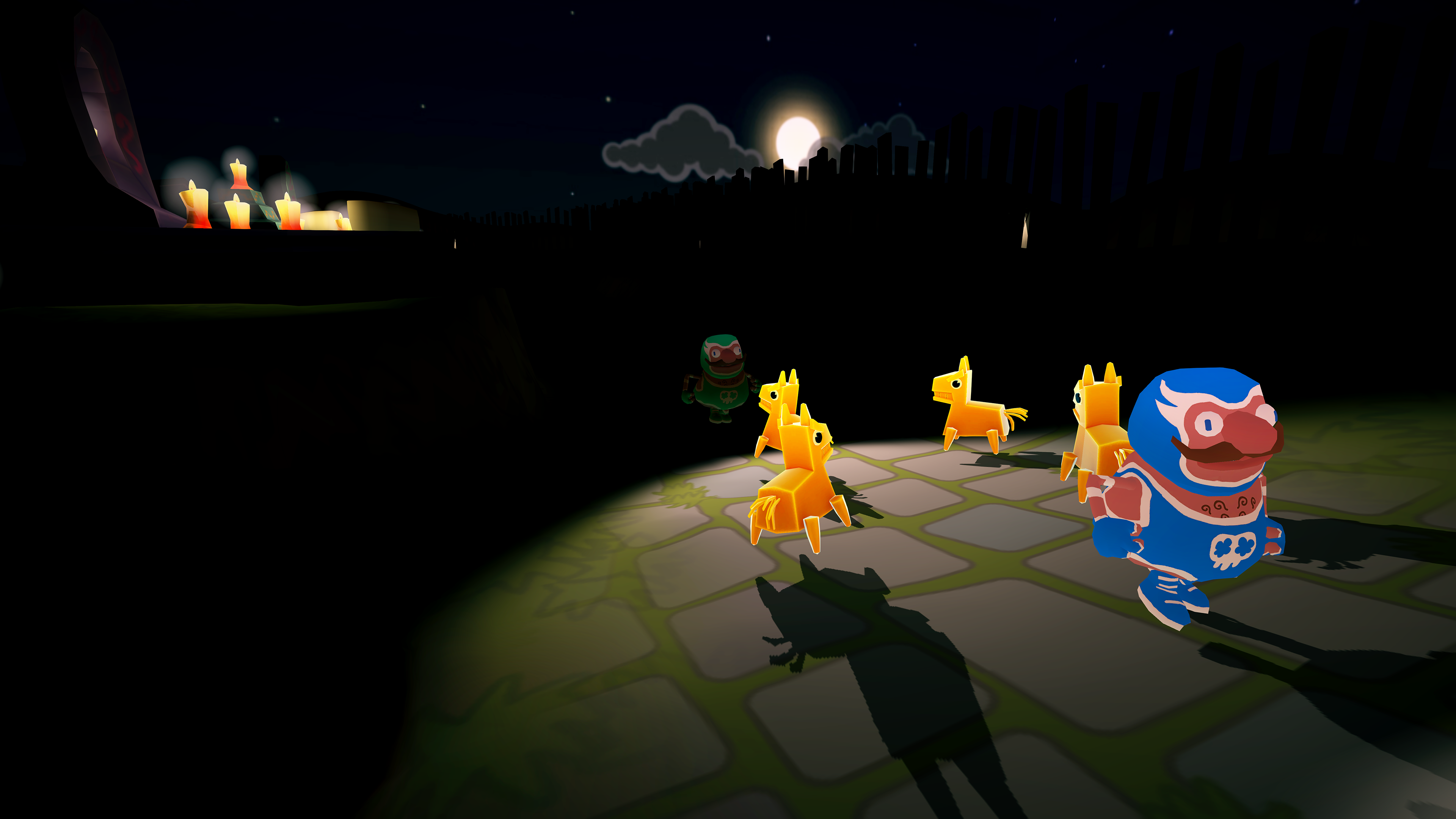 The game features several modes with varying mechanics, but the heart and soul of the game is Multiplayer Race Mode where players must outlast their opponents amidst explosions, piñata stampedes, and all-round chaos! Being a battle-racer, weapons are of course on offer and there is a good mix to aid your pursuit of victory. Some have a subtle effect on proceedings, such as your typical speed boosts, whilst others can turn the tides much more dramatically, like the InvinciBull mount or the Gwack-a-Mole Mallet! There is even a Tequila perk that causes the screen to temporarily twist and distort causing disorientation for all. Those that can't keep up or perish in some way are eliminated from the current round, with the last amigo standing claiming a round-victory, enough of which results in them being crowned as the overall champion.

"We just wanted a pick-up-and-play multiplayer game we could have a quick go on during our lunchbreaks, but there was a distinct lack of games that allowed us to do that on current gen consoles, so we decided to make our own!” - Ben Lowther, miniBeast Games 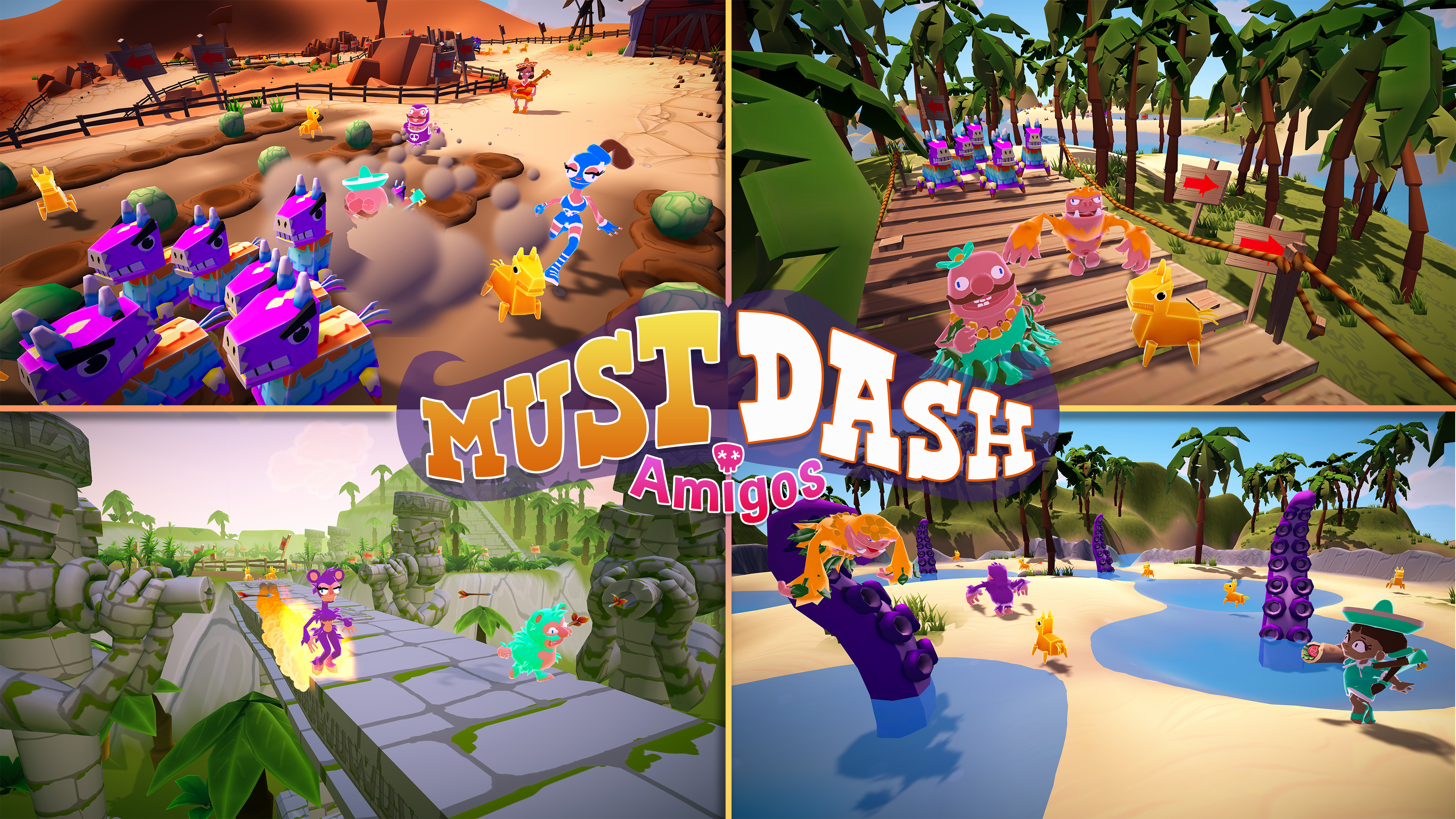 Other game modes include Battle Mode where you face-off against each other in an enclosed arena using the weapons at your disposal. There are 8 arenas in total, with some interesting environmental obstacles; one particular level randomly spawns large Kraken-like Tentacles that will drag you underwater! For players craving longer gameplay sessions, Tourney mode offers just that, with a total of 18 different Cups up for grabs. Tourneys consist of a series of just Races or both Races & Battles and a Tourney leader board system to determine the ultimate champion. For those looking to play solo, Time Trials give you the opportunity to learn tracks and test your speed, whilst Challenge Mode features three different challenge types across all tracks, that will have you controlling two characters at once, outrunning a rampaging lethal Piñata Stampede, or trying to catch an elusive Mystical Piñata.

There are no micro transactions in the game, instead players earn an in-game currency (called Moustachios) solely through gameplay. Moustachios can then be used to unlock different outfits for each of the 4 unique characters, although there is one particularly shiny gold outfit that can only be obtained from a secret achievement.