Follow Soleil's story as you battle it out through ancient caverns governed by the power of the Gods. Slash through monsters in this hybrid of adventure RPGs and Puzzles games, inspired by Knightfall from Megadev, as you have you wits tested against the monsters. Destroy blocks and monsters alike, in something that might remind you of Bejeweled, but with a refreshing new breath! Find out the main character's motivation and get to know the other characters of the plot, like the sweet girl Ciel. Play through the entire first dungeon of the game in the beta. The game is still in development, so your feedback and good ratings is important as we create more awesome content for you guys to play with!

A new version for Monster Puzzle RPG in Google Play!

We have launched a new version of Monster Puzzle RPG to the Android Platform!

Click here for the new version on Google Play!

This isn't a simple update, though. The game content has more than doubled and many new features have been added.

First, the story. The first version ended with Soleil finishing up the first Phoenix Dungeon, as anyone who played might recall. He met up with Ciel there, an orphan girl who starts to go accompany him in his adventures. Their relationship that was introduced deepens in this update, which has more than doubled the story segments of the previous version. You'll get a deeper insight in to Soleil and Ciel's past and a new character is quickly introduced, who'll become more important as the story continues in future versions.

Alongside the story segments we have 11 more Story Stages, filled up brand new monsters! This time we have 3 new normal monsters and 2 new bosses. Adding that to the previous version, we have 9 monsters in total, each with their own range scheme. That brings new challenges to the table as you figure out the best strategy at each level! 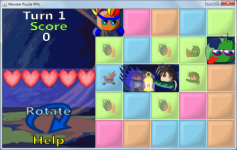 One of the Challenge Stages!

A new challenge mode was also created, for those who want to prove their skills. There are no story segments, but there 30 challenge stages, which should keep players pretty busy, as some of those are pretty challenging. Coupled with the ranking system, it's quite a treat for those who would like to complete the whole thing.

With a total of 51 stages, we all hope you enjoy this new version of Monster Puzzle RPG for Android. If it's better received, we'll port it to the desktop too!

Monster Puzzle RPG for Android too!

I have just uploaded a game me and my cousin made called Monster Puzzle RPG! It's our first beta release, really! We also have an Android version up in...

The first demo of the game, goes up to the first dungeon! It's a jar file, so it should work with Windows, Linux and Mac, although it may be a bit tricky...

Legend of the Piper Girl Adventure

The World Next Door Adventure

The friends of Ringo Ishikawa Adventure