Means of Escape is a new IP currently in development by Pub Games. In Means of Escape, players must guide the out-of-control suit (and its hapless occupant) through to safety, using both puzzle and twitch-gaming skills to negotiate the hazardous environments. The game's unfortunate protagonist, Terrence, has purchased the latest model of the Means Of Escape evacuation suit (MOE) - the latest must-have corporate gadget of the near future. CEOs and VIPs invest in the suit as a form of personal protection, but little does Terrence know the suit often causes more trouble than it solves! As a result, Terrence will have to suffer the suit's over-zealous fits of mayhem and carnage whenever it deems he is in danger - players control the suit by placing actions for the suit to perform in advance, offering a unique twist to a much-loved style of game

Thanks for voting and helping Means Of Escape on it's quest to become the 2022 Indie of the Year. You are now in with a chance to score some free games. Help this game secure more votes by embedding the widget (or link) we have included below on your favorite sites.

What is Means of Escape?
In the not-too-distant future CEOs, VIPs, and other corporate bigwigs have invested in specially designed suits called the “Means of Escape” (MOE) suit. The idea of this suit is to immediately get the wearer out of danger as quickly as possible. Unfortunately, under certain circumstances, the suit can into a “premature evacuation” mode whereby the suit immediately tries to “rescue” the inhabitant from non-detrimental dangers by throwing him or her into danger. 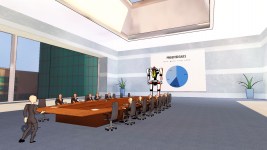 Developed using Epic’s Unreal Development Kit, Means of Escape is a forward-planning puzzle platformer. Rather than control the MOE suit in the traditional platforming sense, players must place actions for the suit to perform in advance, dropping markers to jump, slide, and shoot rockets throughout the environment. 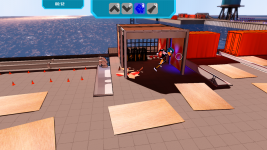 Premature Evacuation, the first episode of Means of Escape, puts players in the Intelligence Ltd. Offices and the surrounding area of high rises and office buildings. 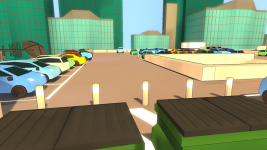 Who is Pub Games?
Pub Games is a newly formed independent games studio based in Melbourne, Australia. Operating out of a converted police station built in 1891, Pub Games is comprised entirely of students who share a common passion for video games - and of course, the pub. We believe in brewing up high-quality, entertaining experiences that are accessible, fun and community-minded.

Be a part of indie gaming history! Help us finish off Means of Escape on crowd-sourced funding community 8-Bit Funding. Your contribution will go towards all the juicy content - additional levels, better animations, more art assets. With your help, we can make Means of Escape a fantastic gaming experience.
What’s more, you’ll score some cool Pub Games loot - beer coasters, bottle openers, copies of the game, your name in the credits and even a chance to make a cameo appearance!

Seems to be good.
I also like the textures, they are awesome.

Keep up the good work, guys!

Indie
Tags
Embed Buttons
Link to Means Of Escape by selecting a button and using the embed code provided more...