Magicians and Looters is an action/exploration 2D platformer. You could also call it a Metroidvania, if that's your thing.

The entire game is stuffed with castles, forests, caverns, even an underground city; and every one of these locations is stuffed with puzzles, treasure, traps, shops, obstacle courses, secrets, and all sorts of monsters.
We went heavy on the monsters. 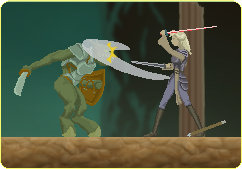 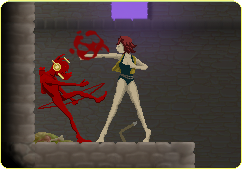 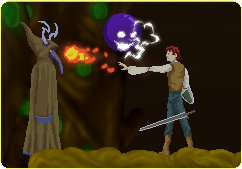 Gain levels by exploring new areas and discovering secrets instead of grinding on the local hostiles for XP.

Get immersed in an epic rescue mission full of gnomes, wizards, and talking cats.
But if reading text in an action game isn't your thing, then no problem! Play the game in abridged mode and all dialog will be kept as brief as possible.

This game is completionist-friendly! Items you don't have are listed in your inventory, along with the general location they're hiding in.

End-game item collection should be a scavenger hunt, not a chore.

Over 25 tracks available on Bandcamp, including that one where it just goes, "Fruit power!" over and over again. For some reason, people really like that one.
People are weird.

Magicians and Looters has been released for XBLIG.

Magicians and Looters debuts the darkest of all dark sorcery: Fruitomancy!

Magicians and Looters in action, with new animations, a new playable character, and lots of hardcore magic.

Development for the action/exploration platformer Magicians and Looters is well under way. Here's a quick peek at the game in action.

I am really enjoying this too. Even after watching somebody play it on youtube for a bit I like the game better than I expected.

ummmm I had never heard of this game until today and I am absolutely baffled as to how something this awesome slipped by my radar. BUY IT ITS GREAT

Are all 3 characters playable from the start?

The character you play as is tied into the story; at least until you hit the meat of the adventure. After that, you'll have the option to switch between them at your own discretion.

Any chance for a PC version? I'm not too keen on dusting off my Xbox to play it.

If (most likely when) that gets announced, IndieDB will be the first to know.

Actually, you know what? Let me be honest: A PC version is guaranteed, but it's too early to say where or when. Also, there's about a million things that can be done to make the game more PC-friendly instead of just the cheap port of an XBLIG game, so that all needs to be squared away before anything else happens.

Ah, so i see the PC version is almost up and running.

Well, since I did go out and dust off my 360 to buy it, I must ask: is this version for the PC different than the 360 version content-wise?

I still might double-dip my purchase, I just want to know.

No big changes to the game content itself, but if you only played the game within the first few months of its original release and you're thinking of a second play-through, I'll recommend it on either XBLIG or PC. We did some major changes to how the characters control, enemy hitboxes, and lots of tweaks to those super-hard bosses (still hard, but not as unfair). It plays a lot better than it used to, and the XBLIG version was patched, so no need to buy another copy.

I can't wait to play it again.

Yayyyyy! Precisely the answer I was hoping for!

Twitter
Tags
Embed Buttons
Link to Magicians and Looters by selecting a button and using the embed code provided more...