Lo of the Dark

Venture into the depth of the ancient Dungeon, tracing the story of godlike dark hero called Lo. Fight different opponents, solve puzzles and try to find out what or who is Lo of the Dark.

Thanks for voting and helping Lo of the Dark on it's quest to become the 2022 Indie of the Year. You are now in with a chance to score some free games. Help this game secure more votes by embedding the widget (or link) we have included below on your favorite sites.

So, it's 3 major versions since previous overview, and there are some changes to be shared.

Now, the combat changed a lot since what it was in the beginning of the year. At first I was working on single-enemy fights only, and that was kinda limiting. So, later, I added battles arranged one after another, when player had to defeat series of opponents. But, alas, it did not improve combat that much. On the contrary, it made some battles tedious. So, all I could do is make battles to be performed with multiple enemies at a time. 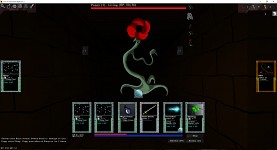 This requires several revisions - of leveling system (which does not yet work the way I wish it would), and of player HP system, which the player now had to have much more. Now, in general, player gets thrice as much HP then before, and XP is calculated based on sum of enemie's 'worth' - a cumulative characteristics, based on all enemy stats.

To supplement multi-target combat, AOE damage was introduced, with several cards dealing damage to several targets (with primary one getting the major part of AOE damage, and the rest getting fixed percent).

Now, there were several serious issues preventing me from adding shadow system to the game. Basically - I have to work with what the engine offers me, and due to the way I handle it, poor sod gets a bit overheated. So, I had to waste a lot of time on making volumetric shadow system up and running, and afterwards I had to severely limit amount of shadow I could allow myself to use per level. 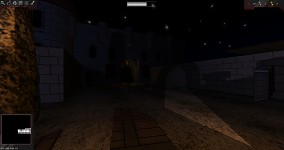 And even then I needed additionally to link those shadows to lighting groups on the level in order to avoid texture errors generated due to the engine being oversaturated. Well, at least now this stuff works and I am able to make some areas more expressive. 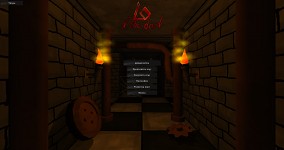 Well, this part... I made a lot of stuff during this time, and there are areas that should be more or less interesting. I, of course, am not saying I reached any reach towards professional design, but I think there are some instances the game should look at least remotely pretty. 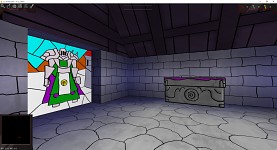 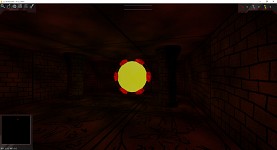 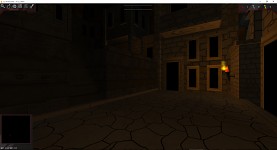 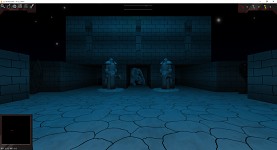 The plot was the hardest part - I could not make it more or less adequate towards the gameplay I was offering. At first the idea was that you, the player character, are following some ancient giy to find out what happened to him. But it was both unoriginal and unsuitable to what I had in mind with gameplay and ending. So, basically, i reinvented the idea, and now it should actually suit the game.

You are now just a young adventurer out for some treasure. You get an old amulet or medallionm and it points at an old abandoned outpost of the Order - an ancient, long gone knight-ordery-like organization shrouded in mystery. Whatever the case with order, one thing was clear - they were rich, and this outpost should be untouched and not robbed. But it is actually not only inhabited, but has crazy dungeons full of things that should've never been there underneath.

Now, in the game the way it is right now, this plot is barely represented. But now I can actually work off the concept I have in hands, and which actually is coherent to the levels, monsters and overall design of the dungeon.

This is, of course, not all additions to the game - there are new levels (I'm aiming at 32 total, with only 3 completely missing (they are currently generated randomly when player reaches them)), the Level Editor is greatly improved, with functions of copying and pasting, light areas creation, basic level geometry painting etc.

A small overview of new features in version 0.9.1.

An overview of project state, features already done and soon-to-be added, and other stuff like that.

A new version with additional levels, perks, opponents and other content.

Twitter
Tags
Embed Buttons
Link to Lo of the Dark by selecting a button and using the embed code provided more...