From the award-winning designers that brought you Homo Machina (2018) and Californium (2015), Darjeeling brings you another revolutionary puzzle game that is one of its kind.

A terrible crime has happened at the Opera City Museum! Mr. X, Pierre's sworn enemy, has stolen and fled with a magic stone that can turn everything around it into a labyrinth. Under the call of the Opera City Museum, Pierre, the detective, must undertake a new set of adventure, across 10 different places, to retrieve the lost stone. The issue is urgent, and he must act now! 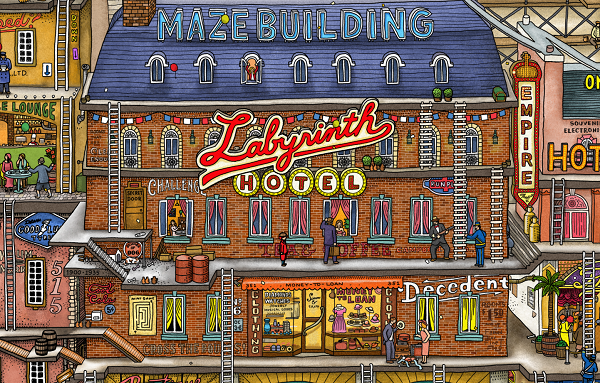 Darjeeling is a multimedia studio based in Paris, France. Its founders, Marc Lustigman and Noam Roubah, founded the studio in 2009, focusing on documentary production, animation for television, and video games. The studio first became recognized through the 2016 video game Californium. Its other notable milestone include Homo Machina in 2018 which won the Best Mobile Game award at Game Connection America and the Ping Awards.

Introduction of IC4 Studio (creator of Pierre the Maze Detective)

IC4 studio, creator of the Pierre the Maze Detective franchise, is an illustration studio based in Hiroshima (Japan) and was created by Hirofumi Kamigaki in March 1998. Thanks to uniquely delicate graphics, they have won many awards such as Bronze for Cannes Lion 2017 and D&AD 2017 wood pencil.

To promote Labyrinth City: Pierre the Maze Detective and grow its popularity (top games), use the embed code provided on your homepage, blog, forums and elsewhere you desire. Or try our widget.

Shark Chum offers a fun and challenging new take on the puzzle game genre. You must strategically drop bait in the ocean to keep a roaming shark from...

Angelo the angel is too lazy to work, instead of helping God like the other angels, he preferes to play with his FaithBook account all day long. God sees...

Bloop! Liquid chemistry has never been so much fun! Ignite your imagination with a whimsical 2D liquid physics-based puzzle game by Studio 2SD. Experiment...

Write is a game of word puzzles and develops your logic, speed, precision and concentration in a funny way. Facts: - Will be available for iOS and Android...