Hunters of the Dead

Hunters of the Dead is a roguelike real-time tactical rpg. You are a "Hunter" destined to cleanse the world from the Undead... The game has 2 parts. You have to explore the cities, and conquer buildings that provide valuable resources (part 1). But each building captured may attract the enemies! The battle (part 2) is real-time tactical strategy styled, similar to the one of "Plants vs Zombies". But beware because your defending units, the "Hunters", cannot be bought with resources or revived. If the die, they are gone for good (Permadeath FTW)!

We have been working hard on “Hunters of the
Dead” and here is a picture from the battle, showing our progress. It is in a pretty decent stage. The battle is pretty much finished and we already have the minimum require features for launch. As you can probably understand the battle functions pretty much the same way as in “Plants vs Zombies”. Except for that the Hunters are not “rooted” so the player gets to be more active. 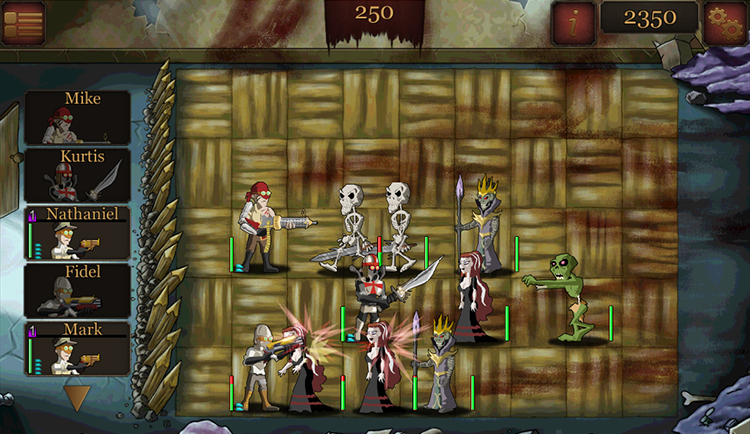 Onto some more specific details now. The game is roguelike, as we have already mentioned, and with every roguelike game, the real challenge is the “Restart” point. It seems very easy for the player, after a long run, to say “Fuck it, I am done with it”. So the trick is to provide the player some bonus on every restart proportionate to the success of the last run. Two possible scenarios exist right now. To provide the player with additional “slots” so that the player can start with more hunters, or to have him unlock new characters to start with. The second one is obviously better, but needs extra content to be created. We will figure it out sooner or later.

So it's been a while since our last update, but we've made a lot of progress since then. We got our first characters and enemies ready.

So the first buildings and their functions have been created and we would like to present them to you!

Very similar to the Rebuild series in concept. But still interesting.

Indeed the concept is similar, but we will have a RT battle and multiple levels, with different tasks. Nonetheless whoever liked Rebuild will like Hunters of the Dead too.

Twitter
Tags
Embed Buttons
Link to Hunters of the Dead by selecting a button and using the embed code provided more...