Heldric - The Legend of the shoemaker 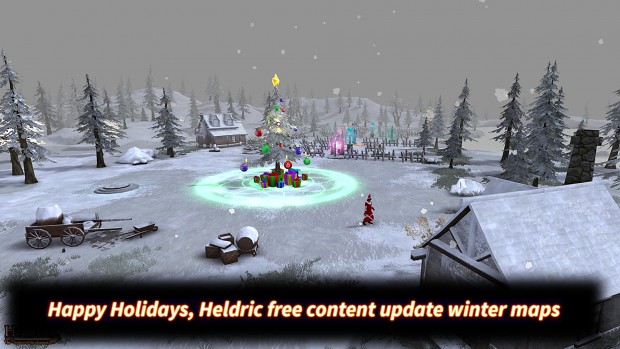 What is a winter holiday update without snow? And lots of it. Including all the festive decorations that come with the season. Decorated trees, gift wrapped pick-ups, Santa costume and even a candy-cane sword for Heldric. All existing maps can also be played in normal or Santa mode. 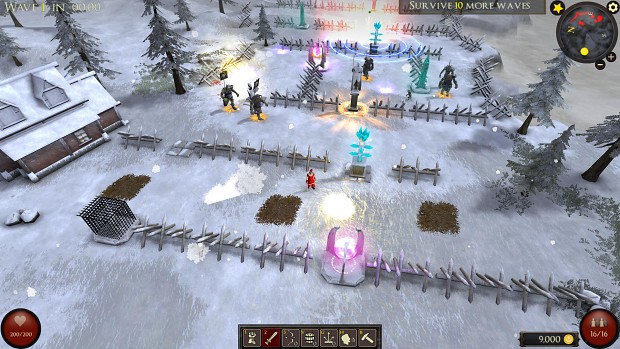 The children were nestled all snug in their beds…

Well, maybe not so much in their beds any more. This update brings more depth to the game by having a chance of spawning a child instead of adult. Children cannot fight, but can run fast and will grow into an adult in 60 seconds. The harder the skill mode the greater the chance of a child to spawn instead of an adult. Keep this in mind as losing villagers can hurt even more now. 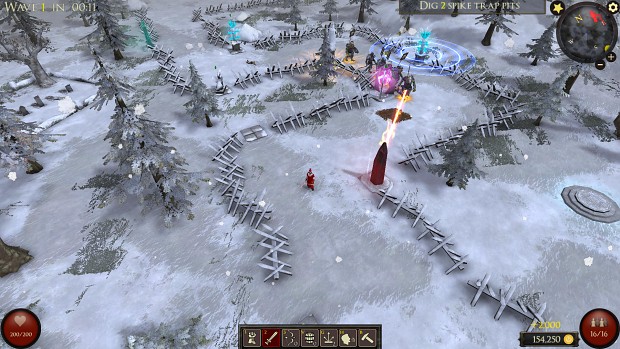 Be good for goodness sake…

You’ve asked for more maps and now they are here. Two new bonus holiday maps include a new game mode where you must protect the Christmas tree and gifts from the grinches out to spoil the holiday. It will take a combined effort of towers and traps to save the day. Don’t forget to ensure your maze is designed to keep them trapped as long as possible.

As they shouted out with glee…

Tower defense fans rejoice. You now have two new towers to unleash on the enemy. A new static spire tower deals electrical damage to all foes in range with a small cool-down. Good for groups and deadly when combined with a slow shrine. But if you really want to stop the enemy in their tracks, then the new void hold tower is what you need. This tower can suck up three to five enemies and hold them for ten seconds allowing other towers to recharge. Once released, they lose 50-75% of their health.

When out on the lawn there arose such a clatter…

This update brings three new music tracks to help set the festive mood. These tracks will automatically play on winter maps or when in winter holiday mode. Many new sound effects have also been added to make for a very rich environment.

When what to my wondering eyes did appear…

Your eyes won’t be disappointed with improved textures and terrain quality. On by default in the options, the new HD terrain adds extra detail and depth. Most other objects in the game also received a facelift with better textures and appearance. 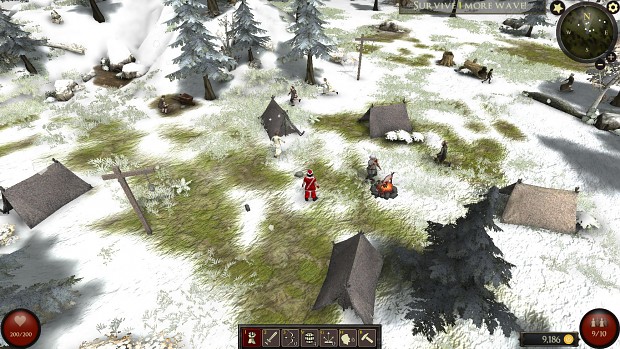 He spoke not a word, but went straight to his work…

In addition to all the other content, the game’s user interface and HUD have also been improved. A new skill bar consolidates actions and weapon selection while providing arrow, keg and spike trap counts. You will also find commonly used functions like build and call for help there for quick use. As before, both the primary and secondary keys may be remapped in the options.

See the change log for a complete list of improvements and changes. I’d like to thank all my fans again and wish you a happy holiday and wonderful new year.

Free content update to version 1.3 with bonus map where you play as orcs with humans attacking, new tower wolf war cage and lots of other improvements...

I’m happy to announce Heldric’s greatest fan community contest from July 4th until July 18th. Here is your chance to win a copy of the game if you...

Good things come to those who wait. Heldric update to 1.2.5276 is a treasure trove of new content and fixes for your enjoyment. The battlefield will never...

I've looked at a Let's Play and noticed the game uses "plots." Does this mean you can place structure only at designated spots?

Nvm. You already replied to this one.

I did a little video on the beginning of this game if you want to see some game play.

I just wanted to ask before buying the game on steam, Will there be some kind of inventory system for heldric and will there be an equipment system?(Armor, different weapons with different stats?)

I also wanted to ask if there were any plans for a multiplayer system as well, like 2+ players can build a village together?

Also i was wondering if, in the future there will be an RPG system where heldric can level up and develop skills and powers?

And lastly, will you add the ability to control you're army of citizens and to train and organize them?

The game sounds very good and very original, but i think it still has a long way to go before i can fully appreciate the game.

P.S I am a very large fan of the game Spellforce (Have you heard of it?) and i am very disappointed that many over game developers have not developed this RTS/RPG mix any further.

Most of your questions can be found on the FAQ: Astralbyte.co.nz

Yes Spellforce is fun, but this is a very different game than that. Check out the demo and see for yourself.

I really like this game. The only complaints I have thus far is one, each time I start a new level, I have to reset my resolution back to the 1768X992. It's a bit annoying to have to do that for every level. It should be able to save my preferences from when I start the game the first time. The other annoyance is the movement of Heldric. It is not easy to control him with the mouse because sometime`s the environment gets in the way when you're trying to run for your life and wasd is useless. If wasd controlled him to run in the direction pressed instead of turning him in that direction, it would be more intuitive.

Thanks for the feedback. Give the updated verison a try. It has new movement controls. As for your resolution, I'd be happy to help on our support forums if you post your system logs. (output_log.txt and dxdiag)

Finally got around to playing the beta demo. Really pleased with the game. Nice and polished, good visuals, and nice sound design. I got drawn in. Can't wait for the finished product!

Thanks for the feedback and glad you enjoyed the demo. It's very close to being ready for purchase.

Ok thanks, gotta try it right away ;)

Indie
Twitter
Tags
Embed Buttons
Link to Heldric - The Legend of the shoemaker by selecting a button and using the embed code provided more...