Eleon Game Studio releases Alpha 9.1 with a lot of bug fixes and improvements.

Posted by EleonGameStudios on Jan 9th, 2019 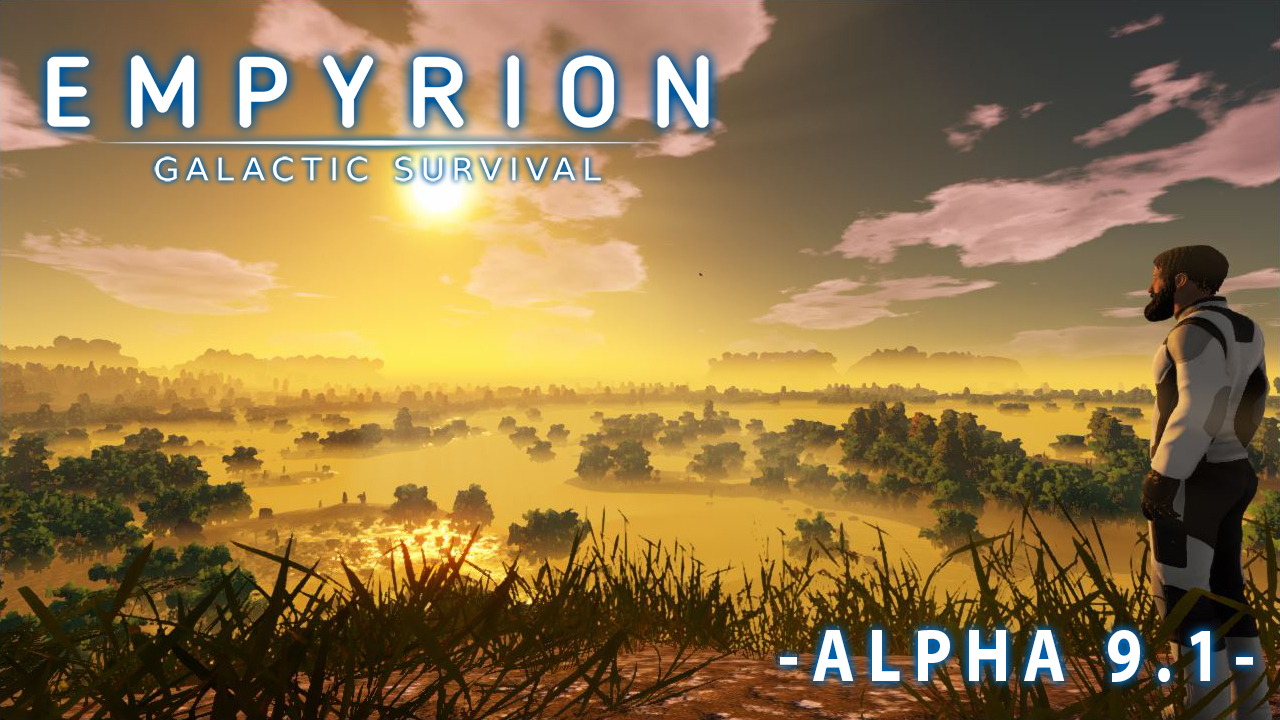 First of all, we would like to thank you for all the insightful feedback we received on the various new features that were introduced in Alpha 9. We have constantly reviewed all the suggestions and ideas and with Alpha 9.1 we are adding a first set of improvements and bug fixes. We will continue to add refinements, especially for Logistic and its handling, in the upcoming Alpha 9.x updates.

With Alpha 9.1, we also rebalanced volume (and sometimes also mass) for nearly all items and devices. Even though ‘volume & mass’ is still not activated per default for obvious reasons, we would like to ask for your feedback regarding the rebalanced values.

Please note that we will add a few more refinements for volume & mass before it will be activated by default. Of course, we will add an option to deactivate it in the Difficulty Settings for those who do not want to bother with this gameplay element!

For the complete list of changes, additions, optimizations and bug fixes in Alpha 9.1, please have a look at the changelog below.

Happy new year from everyone here at Eleon Game Studios! 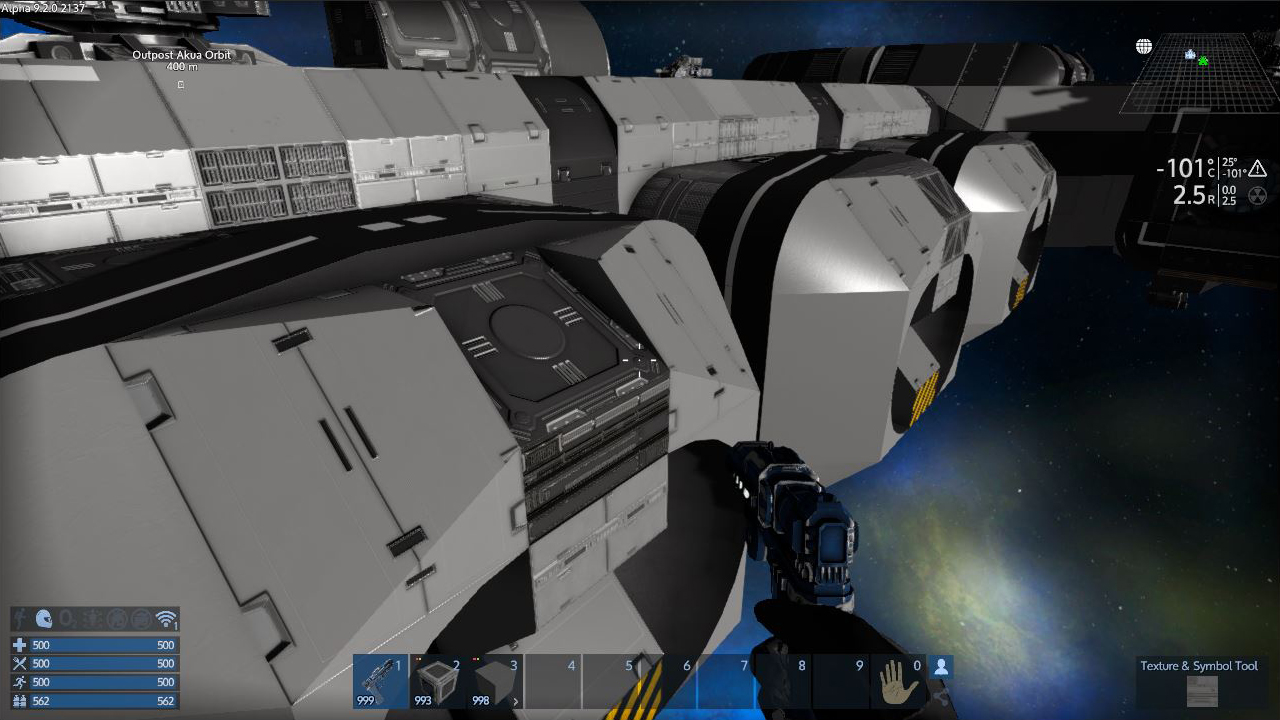 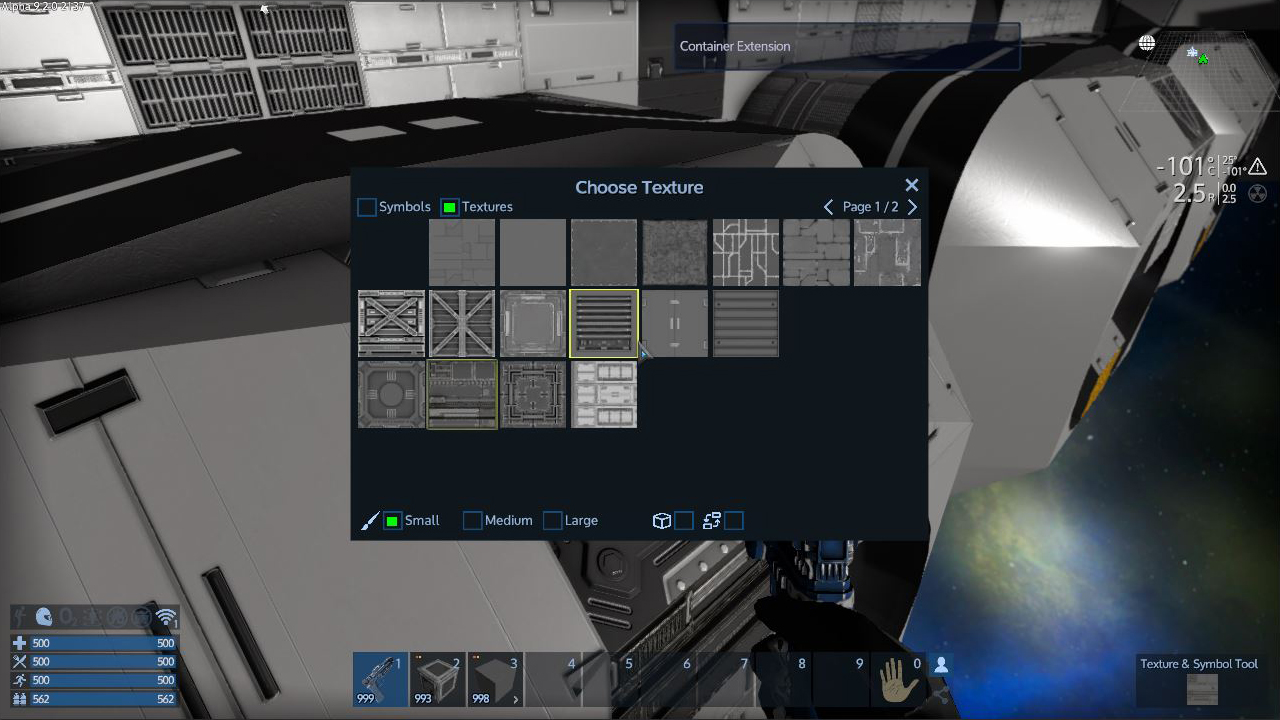 - Falling SI parts can now be picked up before they disappear and result in a certain amount of the used de-constructed materials
- Connection to remote container is now persistent (only connection is persistent, not the content of the toolbar!)
- When entering a cockpit with the connected toolbar active the vessel toolbar is displayed
- Moved default Hotkey for switching Lights on vessel from T to L
- Planet life entities will now avoid spawning in bases
- Reduced toggle delay for main power, lights and weapons from 1.5s to 0.75s 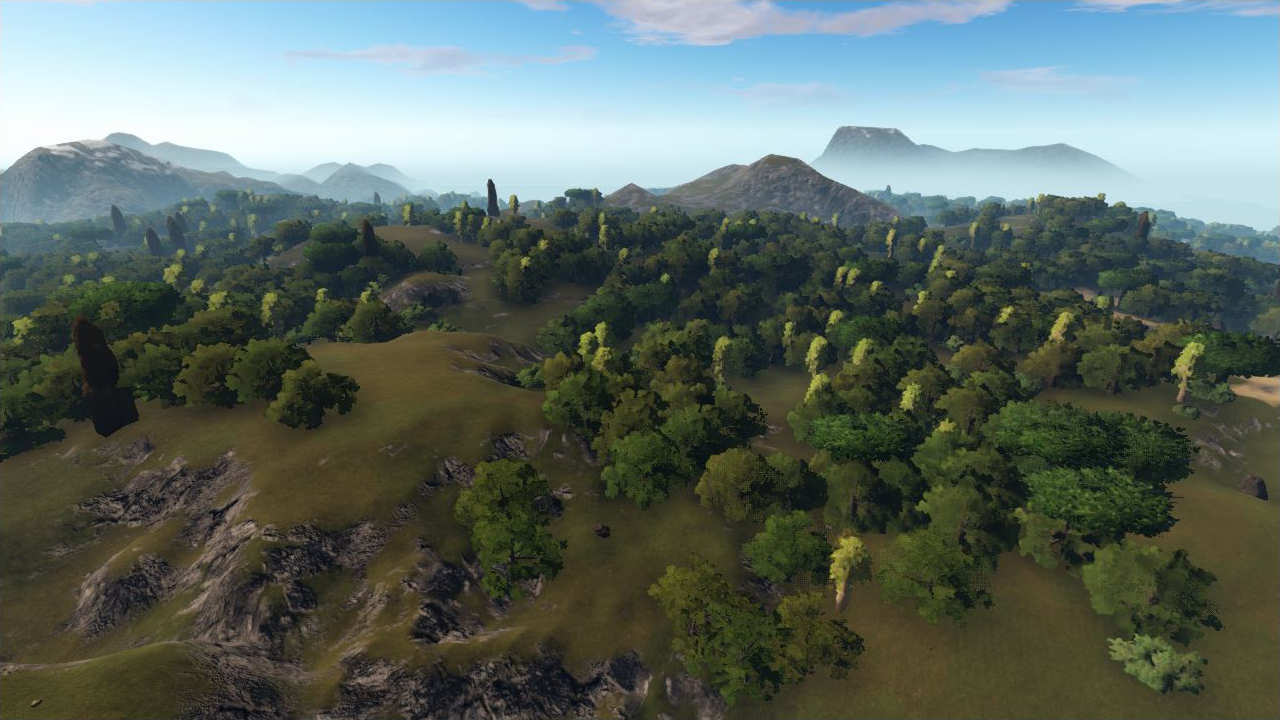 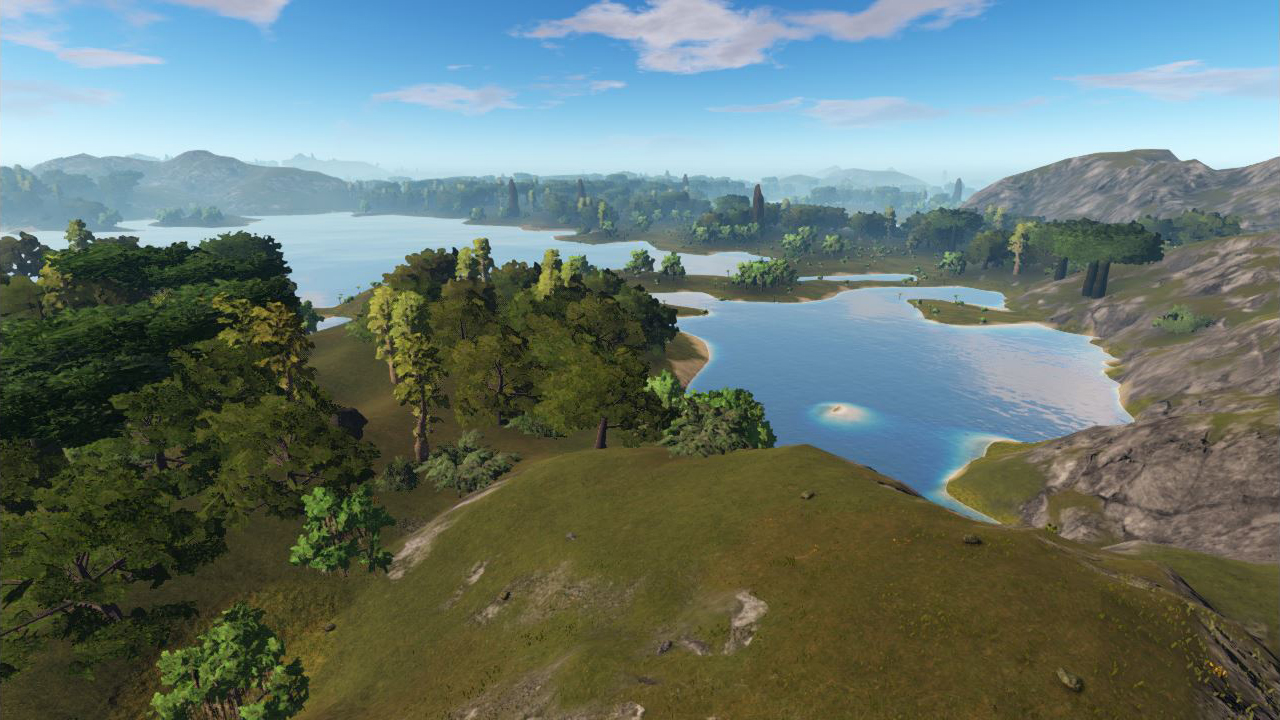 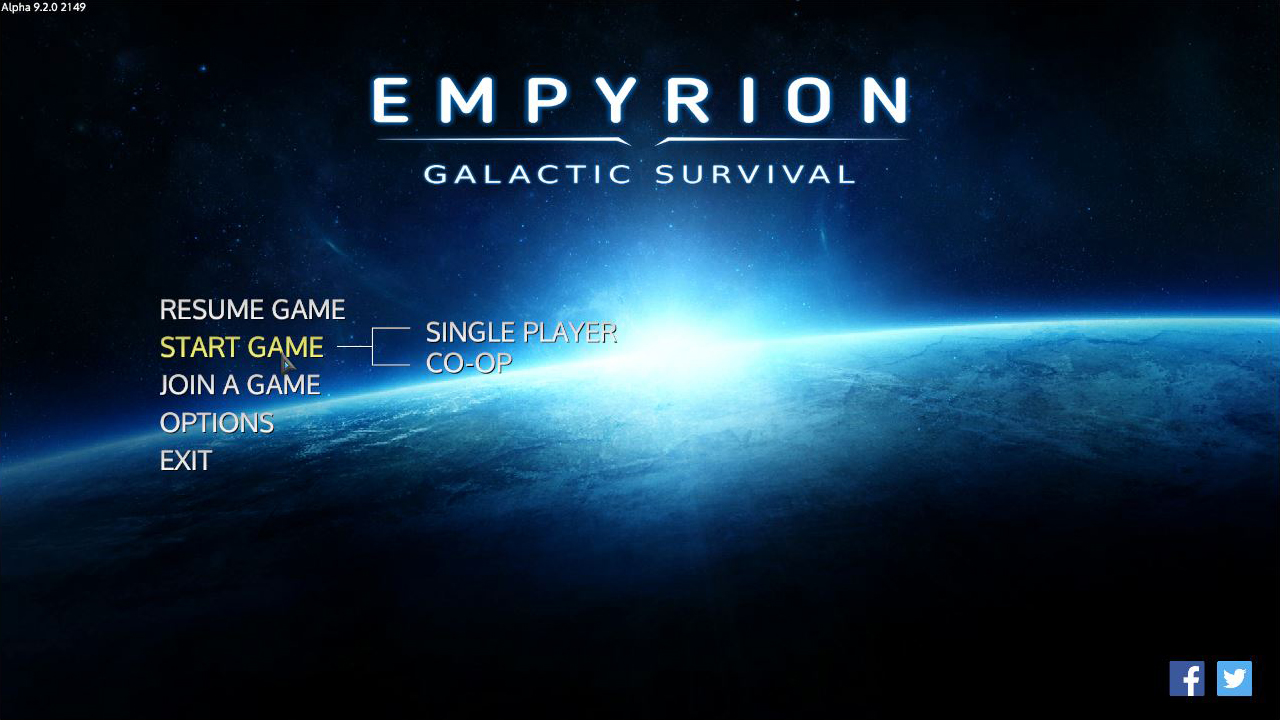 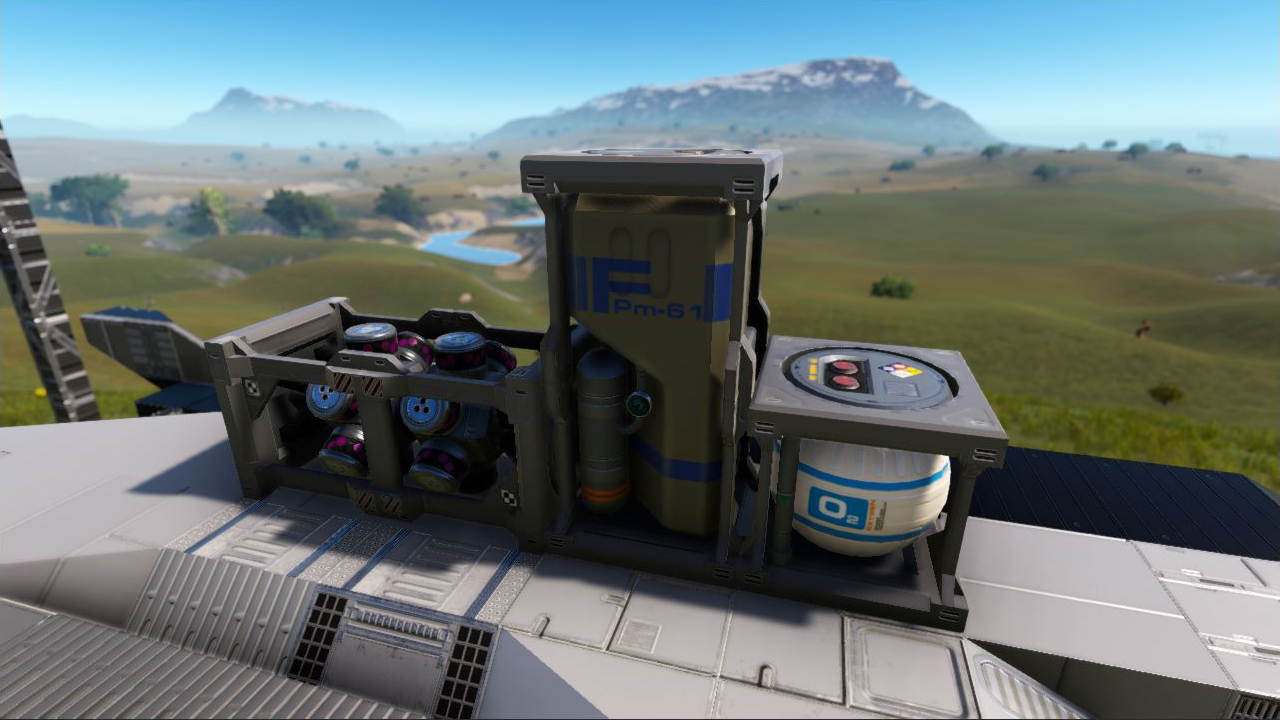 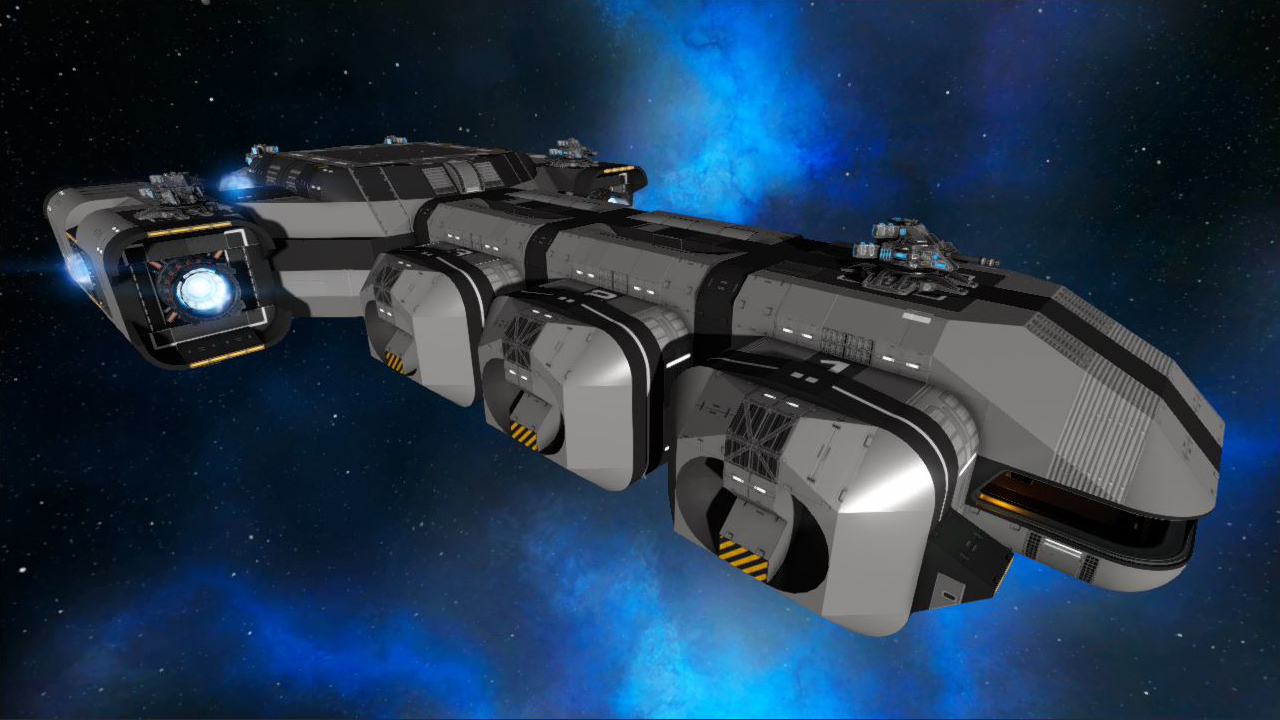 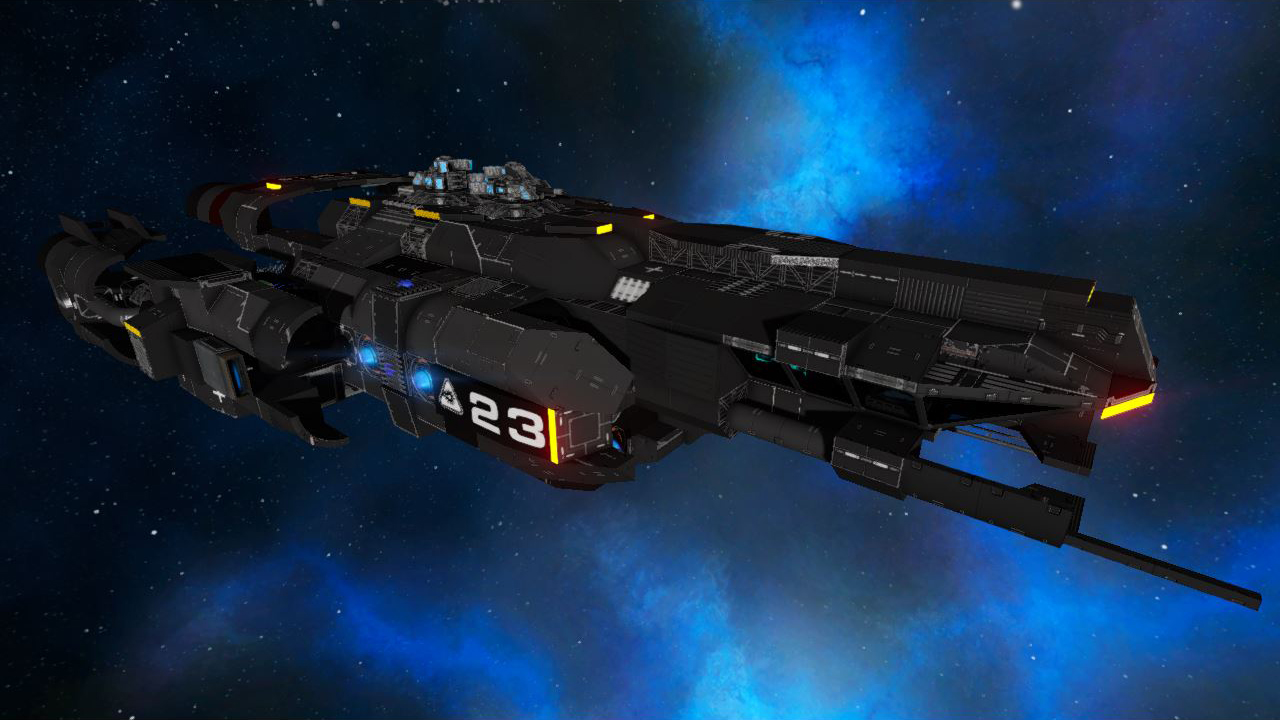 Other Changes:
- Better aiming on Sniper T2 and Epic Sniper, better sniper scope on Sniper T1
- Added special message when trying to add a block on a structure that has an indestructible core
- Allowing now also 'none'/'public' (lower case) for factions
- Markers for blocks (set via Control Panel) are now positioned inside the blocks instead of above blocks
- Adjusted core type for mode interface
- Updated mission POI (SV_TOPWreckage)
- SSG: Show POIs in faction colors.
- Show last selected tab in faction window
- Cleaned up warnings and improve message if a distance range is not provided for a POI requiring such a range
- Removed flare from tribal torch and firepit and reduced light range
- Some rearrangements of stock prefabs
- Removed ingame message "You are in range of a Remote Logistics Network..."
- Changed: ModAPI Request_Player_AddItem not allowed while player inventory is displayed in Logistics window
- Added Localisation keys to be able to add general text for reputation information
- Added missing loca keys for containers
- Updated Localisation

Bug Fixes:
- Fixed: Exploit with exiting a cockpit and exit cockpit inside base (you get now moved inside/very close to the cockpit, if no free position is available. Please be advised to rebuild your ships if your cockpit is surrounded by blocks or other obstacles. You need about 3 "free blocks" of space above the cockpit and a clear path to walk to it / reach it)
- Fixed: Food processor input & output not maintained when saving BP's
- Fixed: Input & output of constructors etc is sometimes not maintained after being far away from them
- Fixed: O2 display flashing when moving in a vessel at high speed
- Fixed: Players with vessels set to private get shot at by NPC factions they are Honored with
- Fixed: Akua - Omicron Scenario Warp Issues (Typo in Orbit playfield in A-O scenario leading to exception when leaving planet Akua)
- Fixed: Problem that trading stations were missing on Arid Starter / Temperate Starter and so 2 Zirax mission were not possible
- Fixed: Removing and re-placing a core leads to RED tag and Faction:none
- Fixed: When switching to connected toolbar while in cockpit toolbar was read-only
- Fixed: Symmetry plane sometimes not placing blocks correctly
- Fixed: Wifi Range does not extend beyond grid size limit and sometimes also below
- Fixed: Exception loop triggered after deleting a structure in the selection area & trying to place the selection area again
- Fixed: Issue with vessels still moving when positioned sideways or upside down with autobreak on.
- Fixed: Ship controller - several other bugs with the auto brake system
- Fixed: Repair station can sometimes become inaccessible (NOTE: won't fix broken stations, you need to remove and place new)
- Fixed: Duplication exploit with drop container
- Fixed: Several invisible plants (Mushroom in Radiated Biome, Seaweed etc)
- Fixed: Radiated biome deco appearing & disappearing as you go past it
- Fixed: Problem with wood texture (Page 1, Row 2, Column 7) leading to exception when using this texture
- Fixed: Wrong Trading Station in Starter Orbit
- Fixed: Spacing of Unlock Points in Techtree UI
- Fixed: After changing playfields the weather is not displayed in the HUD or showing visually until a reload is done.
- Fixed: Block faces are sometimes invisible/missing in MP
- Fixed: Other players can be seen "Flying" when they are swimming in 1st person view.
- Fixed: Retrieving containers (BA/CV) with multitool gave back containers (SV/HV)
- Fixed: CargoContainerSV (Block Id: 1678) gives BA/CV Container
- Fixed: CargoContainerSV cannot be crafted (the container is now in Cargo Boxes (SV/HV) blockgroup and not displayed individually anymore)
- Fixed: Retrieving CargoContainerSmall/CargoContainerMedium with multitool did not give back any block
- Fixed: Not possible to join any server after pressing the Back button on starting planet selection
- Fixed: Suit Constructor having no internal containers
- Fixed: Approach and remove map markers come back after playfield change\exit from server
- Fixed: More AI Behavior leak problems
- Fixed: Night vision cannot be turned on or off whilst in a cockpit seat
- Fixed: Players in passenger seats can be placed outside the vessel in some circumstances
- Fixed: [MP] Player vessel are getting repositioned after player exits cockpit and other problems with invisible colliders for vessel collision
- Fixed: Issue with deco billboards
- Fixed: Invisible colliders on terrain (plants, deco etc)
- Fixed: Invisible Deco in Radioactive Biome
- Fixed: When using a scope while the hud is turned off the view becomes broken
- Fixed: Problem that some creatures did not correctly flee from player (eg Parasaur at game start on Temperate Planet)
- Fixed: Scope: alignment for some scoped weapons slightly tilted
- Fixed: all the retractable landing gears that are solid blocks are non-airtight
- Fixed: Player turrets on vessel are not shooting or tracking enemy players or vessels
- Fixed: Issue with HUD colors with POI's using the core 'NPC Core (Admin)'
- Fixed: Faction-owned POIs were sometimes white (not using MapMarker: Neutral for faction-owned POIs anymore)
- Fixed: MapMarker: Neutral not working anymore
- Fixed: Faction Standing: Reputation given/reduce when outside territory (implemented that there is only a single repu award for ALL players in a faction if NONE is in hostile territory)
- Fixed: Steal O2/fuel with logistic
- Fixed: NearPOI revealing all POI of the same BP group
- Fixed: Several creatures were not correctly classified as "Predator" or "Prey (Otyugh, AlienBug03, Oviraptor, etc)
- Fixed: Ramps can be placed everywhere and give back large ramps
- Fixed: Missing crafting items in Constructor (added new CV landing gears)
- Fixed: POI lost its Custom Color Palette sometimes
- Fixed: Exception spam when a 'portal' is dropped on the ground
- Fixed: Not all POIs were correctly attributed to factions on Moon Nascent playfield
- Fixed: SV was floating in air in Orbit Start (empty) in Creative Mode
- Fixed: Minor typos in PDA - thanks to one of our players to pointing them out
- Fixed: Several Internal exceptions