Posted by EleonGameStudios on Jul 17th, 2018 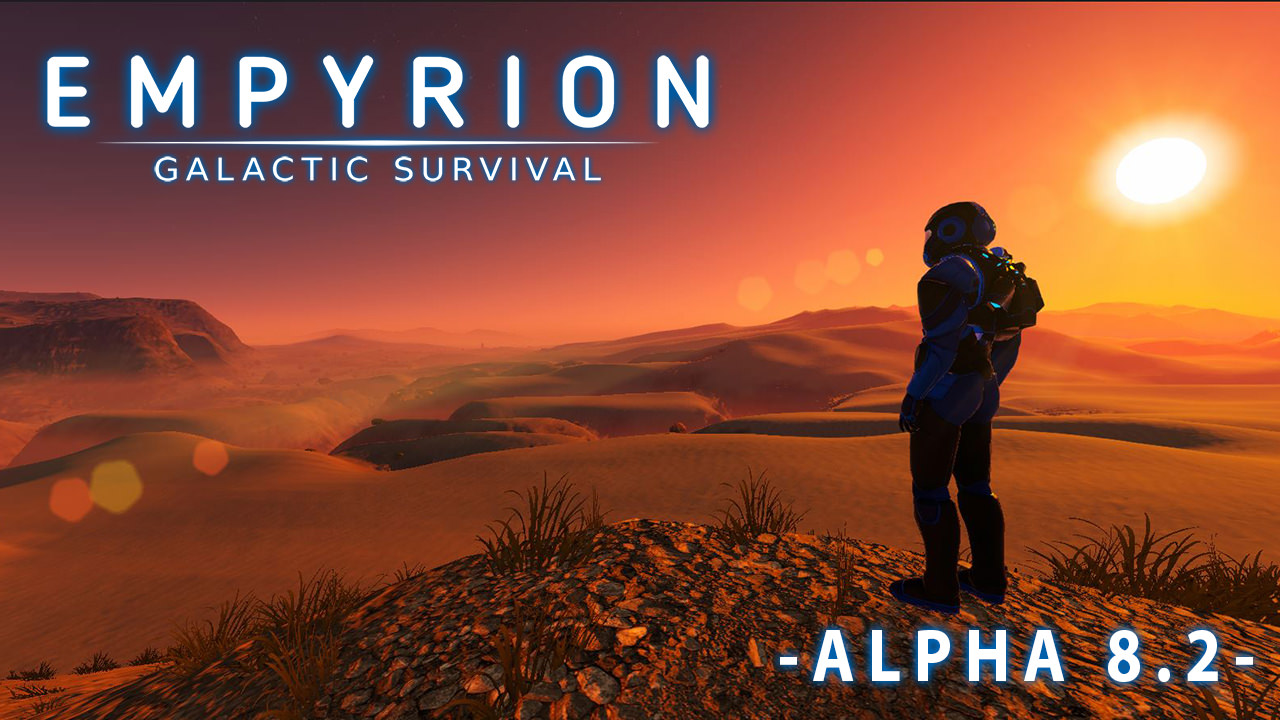 Alpha 8.2 has been released to the public branch!

This version is not only adding a few new features and fixing bugs but is addressing an important, technically related topic: loading and unloading structures in a sensitive manner in order to reduce performance cost - which also adds the possibility to significantly increase the amount of structures per playfield (bases, POIs) from 255 to over 65.000!

The "Dynamic Structure Loading" (DSL) will achieve something that may sound as a no-brainer, but actually has a lot of side effects and implications: It will completely unload structures when they are out of render distance. This means, if a base or vessel is farther away than 1200m on a planet (or 3000m in space) the game will unload the structure and save performance. This is similar to when you leave a playfield, all the bases and vessels are unloaded - but now this will happen an active playfield. And dynamically. And in realtime!

DSL affects a lot of game functions, which are now needed to be handled ‘on runtime’ although they are technically unloaded. That’s not only affecting plants growing, fuel in bases is used up, constructors and furnaces crafting, solar power charging, but also elements like spawning in a medic station that is in a base outside DSL range (and thus unloaded).

DSL is not a technique that allows to increase the actual build size of bases or vessels (that’s a future topic!), but to reduce the load for structures that you cannot see anyhow! The latter is also the reason why we can now have more than the 255 structures, as it now does not make any difference if you cannot see 250 or 65530 POIs ;)

With 8.2, we of course also added more content and features, like the new Arid starter planet, homogenous group settings, a quick-pickup for your backpack, AI improvements and more.

Check out the Version 8.2 update trailer below for a quick overview.

(thanks a lot to Ashrai for the update video)

Check out the full changelog below and please report bugs and issues here: Empyriononline.com 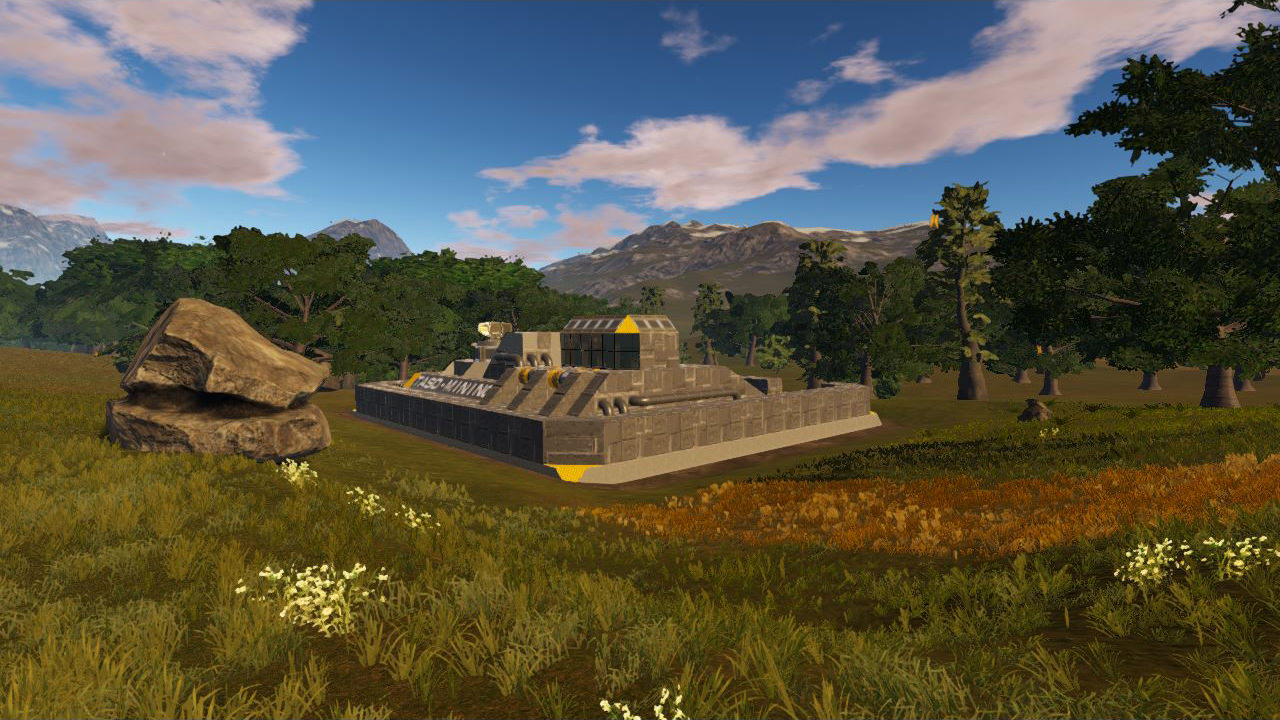 We introduced a new technique - so-called "dynamic structure loading" (DSL) - to load only structures that are around a player. Before, we loaded all structures on a planet which slowed down performance and increased load times. The current implementation will unload the structures immediately when they are not near the player any more (more than 1200m away). Later we will introduce a timeout of about 2 minutes - the immediate unload is very good for testing. 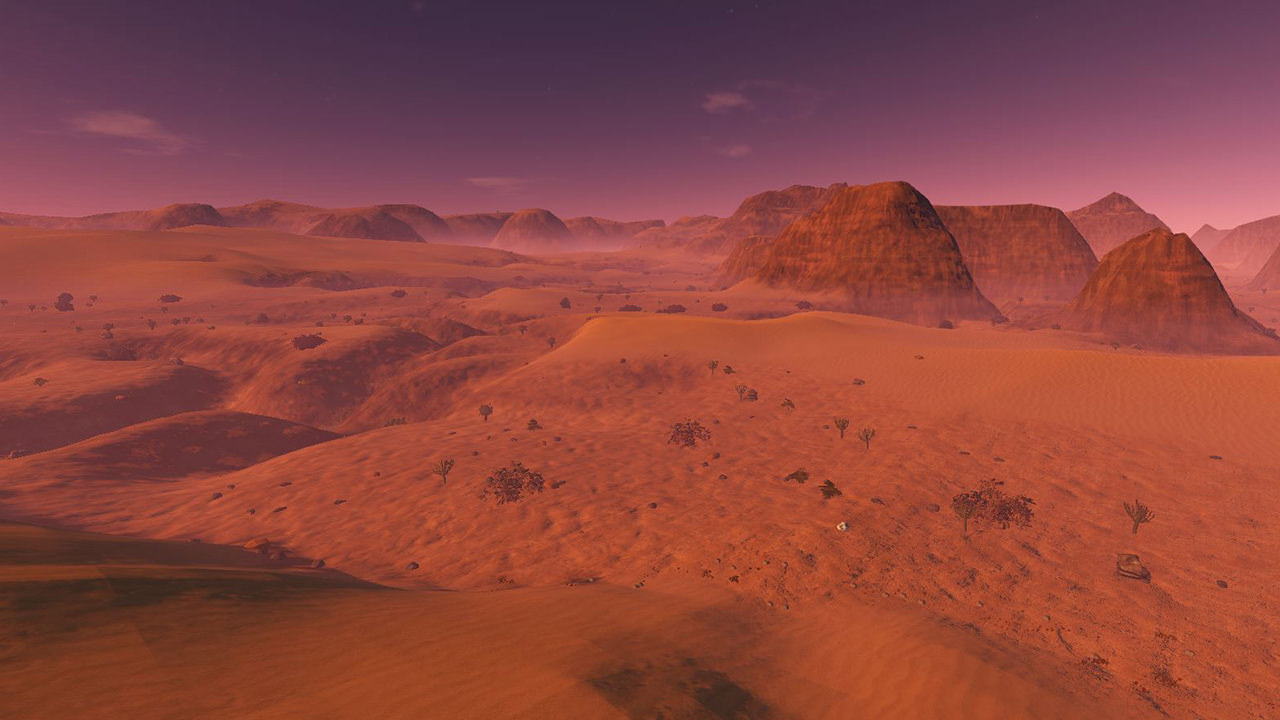 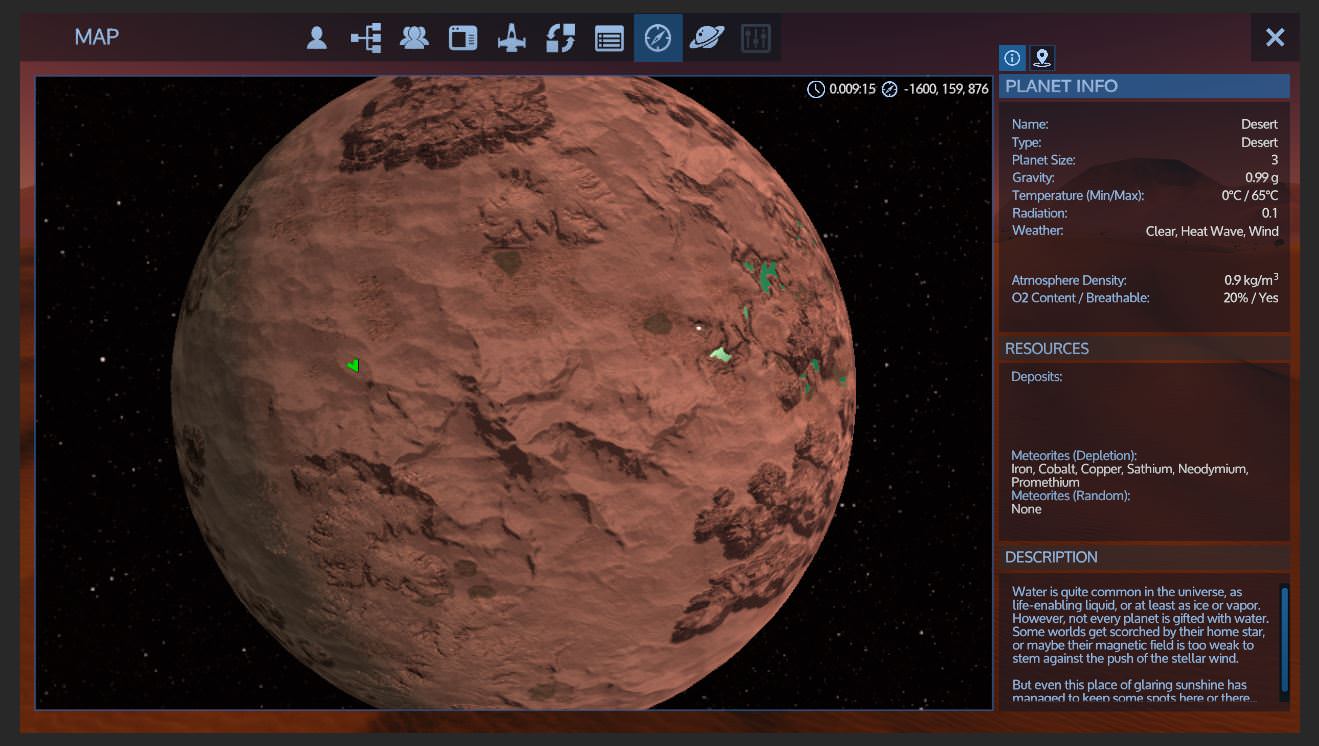 We changed the PlanetType of the old Desert Planet into Arid Planet. Then new Desert Planet is a real Tatooine-style desert planet with interesting natural POIs: 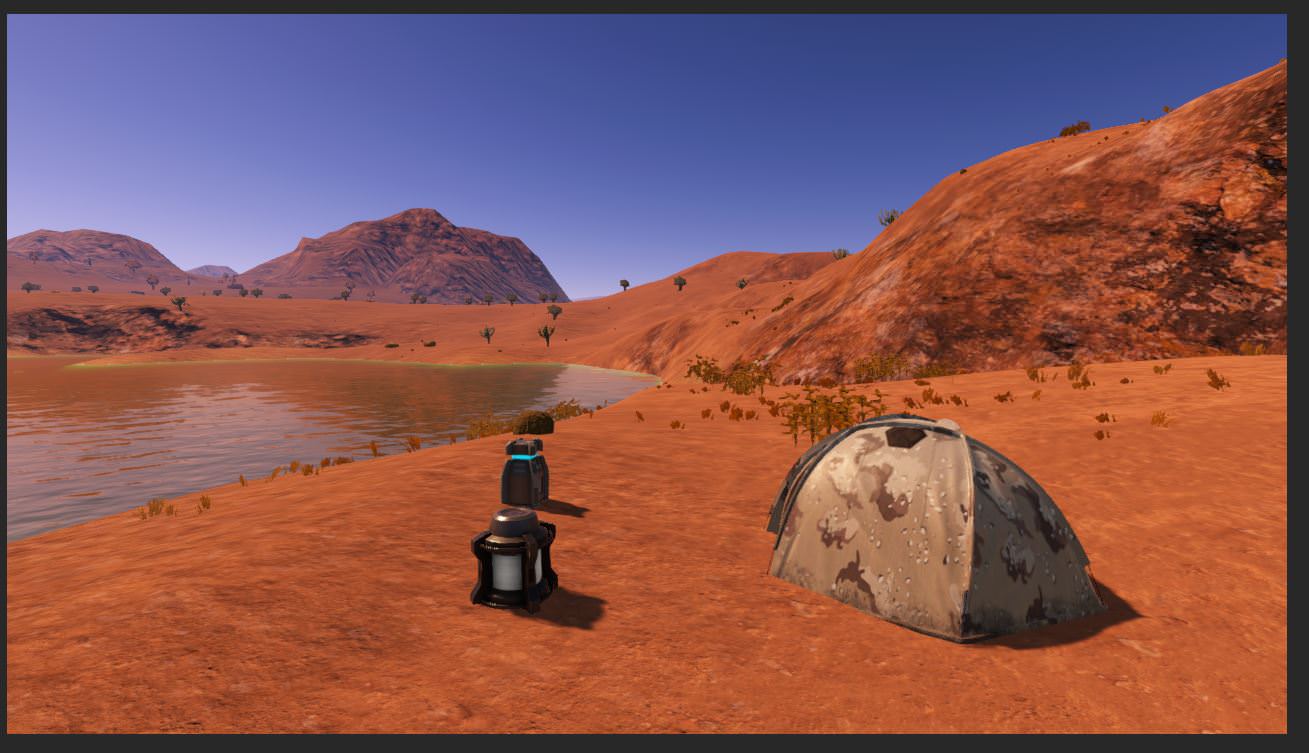 Please note that the PDA missions other than the Robinson Protocol are not yet fully adapted to the new Arid Starter planet. So you might (for example) not be able to find certain plants or crops required for those (will be added and refined in 8.3).

For Feedback regarding PDA issues or on the new Starter planet in general, please use this thread: Empyriononline.com 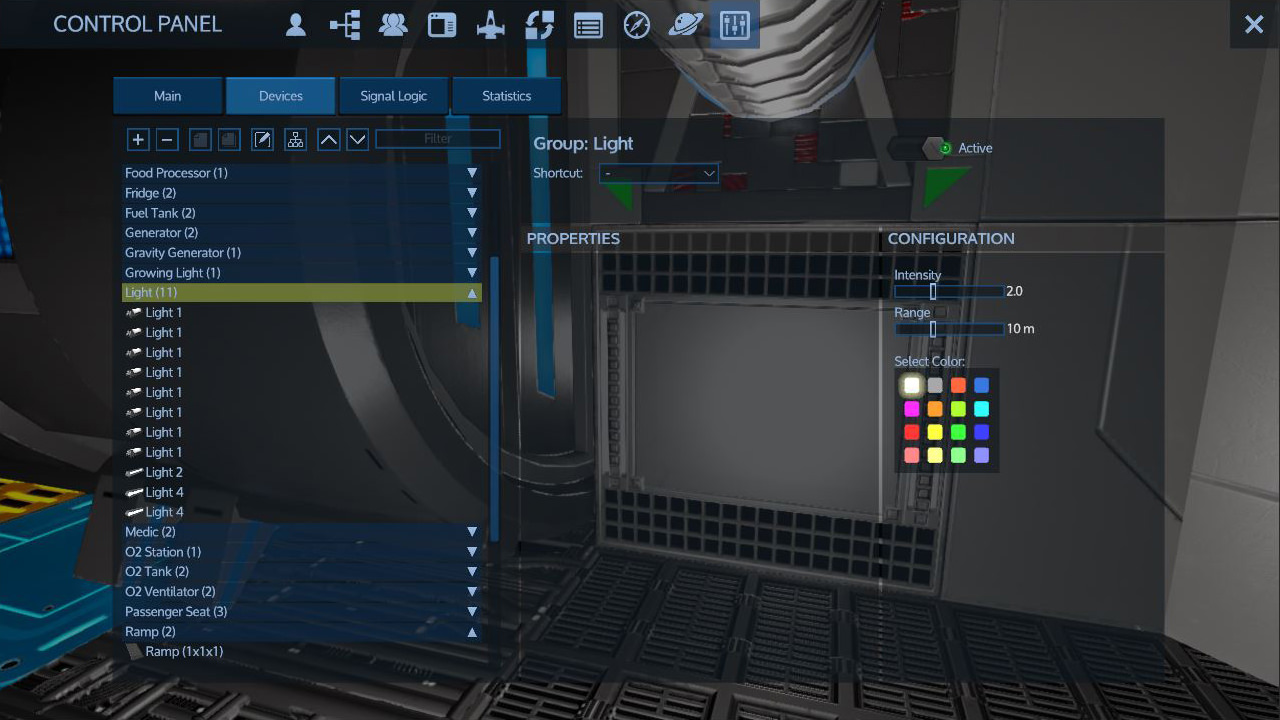 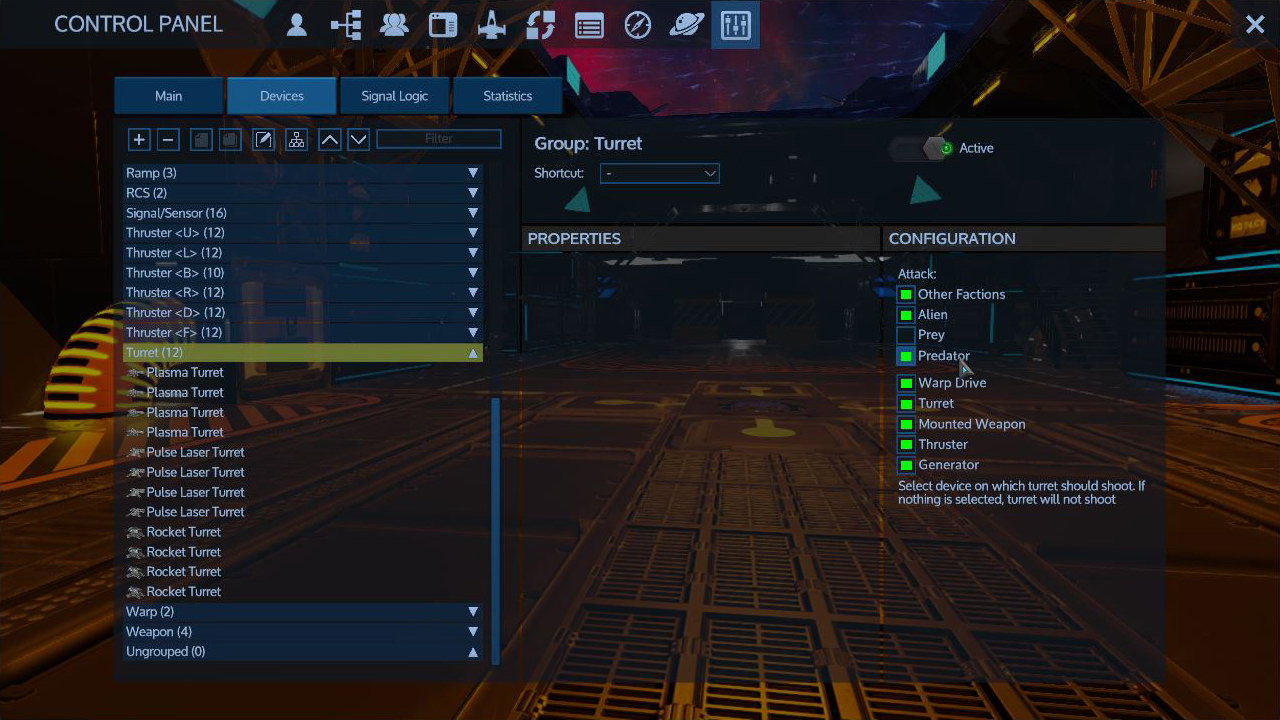 - There must be only a single type of device (eg: only Turret Blocks in Group)
- Added Spotlights into own control panel group so that on Autogroup Light/Spotlights are separated and Lights are in homogeneous group

Tweaked Default Random Scenario to be better compatible with MP:
- Set all POIs to regenerate
- Set "LandClaimZone: Device" so that buried crashed ships can be dug out and still regenerate
- Added resources to regeneration via resource asteroids

Gameplay:
- Extended structure limit from 255 to 65535 per playfield
- Use SHIFT+F to instant-pickup backpack and drop container
- Added "Instant" as gameoption speed for Blueprint production / Repair-2-Template
- Turret Targeting: Ignore Structures and their sub-devices IF structure is fully deactivated (Main Power OFF)
- When salvaging a block doesn't return anything this is indicated by a red tool icon
- Removed MaxCount in Config.ecf for Capacitor (Solar) [internal: SolarGenerator] > Battery Capacity can now be increased by placing more Capacitors
- Display Maximum Fuel/Battery capacities in Statistics
- Local Coop games now use the SinglePlayer game options dataset
- Added "show bounds" checkbox to repair bay that will show the bounds of the ship to repair. This will switch off after 10 seconds
- Added screen-message for Repair-2-Template Intake when adding a second stack which is then larger than requirement
- Changed "Current Durability" display to also include current max durability, e.g. 450/500
- Added Coordinates and Distance in 3d Planetary Map when circle marker is placed
- Reduced shaking of Multitool, Survivaltool, DrillT2 (not camera shake but shaking of tool itself)
- Added O2 tank to Essential Category
- Increased O2 value of small O2 bottles (from 50 to 75) and large O2 bottles (from 200 to 250)
- Removed light from Survival Tool
- Deny manual usage of weapons and turrets of docked vessels
- Moved LizardMule to Arid planets
- Crafting: 1 Vegetable now gives 2 PlantProtein

UI Update:
- Added option to switch between metric and imperial measurement systems
- Updated preview icons for several blocks (devices, components, ammo, etc)
- Updated Block info: added first batch of new descriptions for items and devices with Infos on how to use them and in which context + adjusted some descriptions that were outdated or not fitting anymore
- Info panel window: Consistent placement of units: unit always be behind value
- Added "CRAFTING" heading to Info Window
- Added Output Count and Craft Time to "CRAFTING" header in tooltip/info window
- Changed Power/Workload "Off" to "None" in Control Panel main page under "Power"
- All Pentaxid based materials (Pentaxid, raw and refined) are now colored in Magenta to make it easier to distinguish from Promethium (blue) and to be consistent with Warp Tank color
- Better UI Font Rendering
- Improved "Status Effect" display in Block Info
- GrowthTime is now displayed correctly with localized "minutes" behind number
- Made some visual tweaks to the ingame console 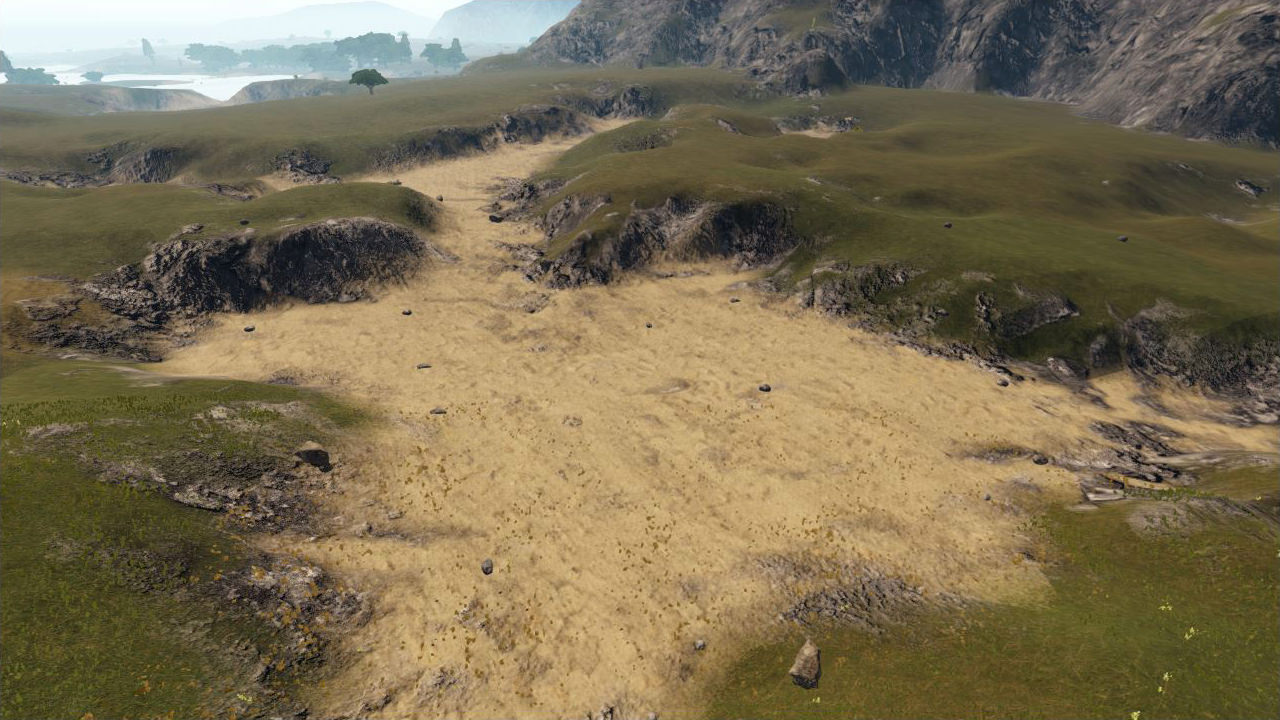 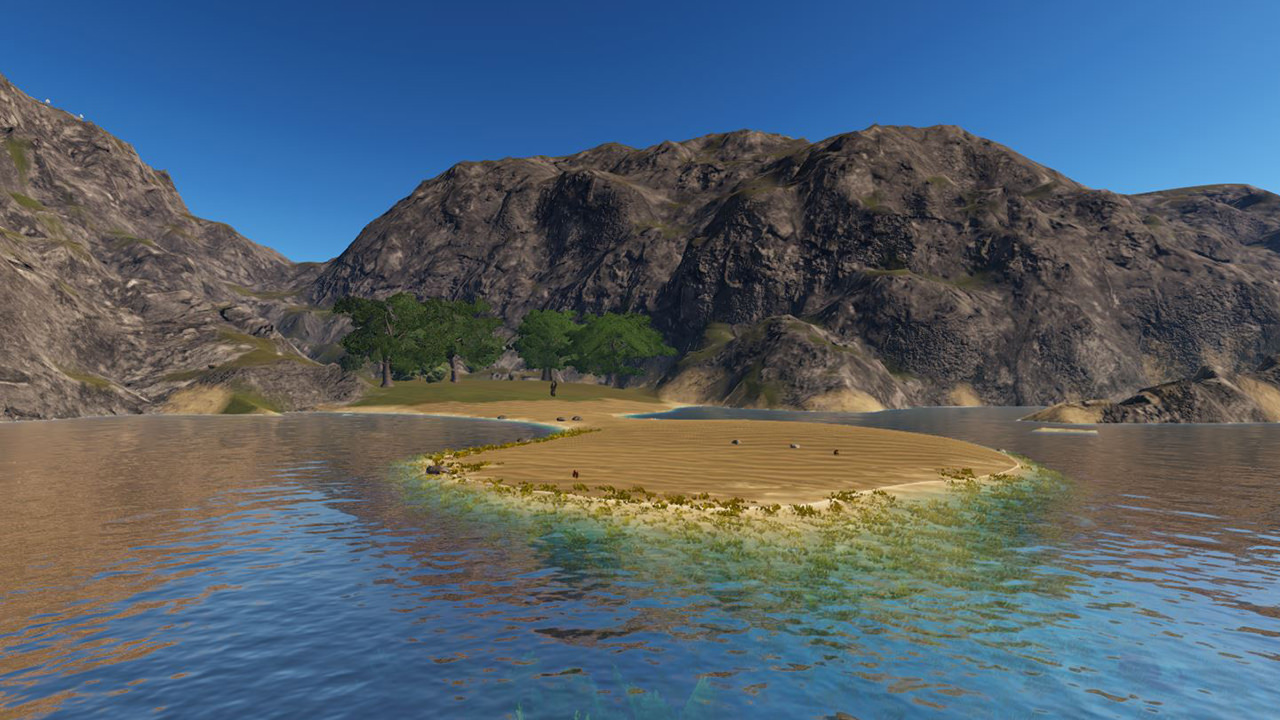 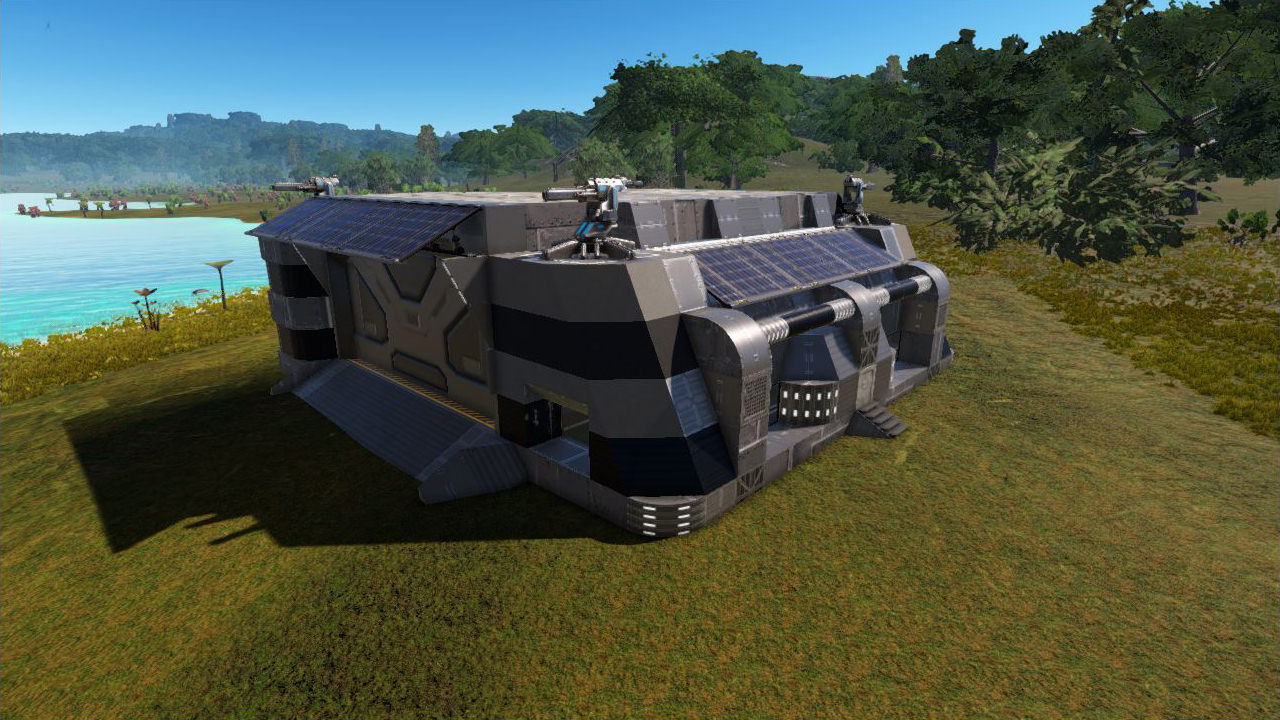 - Updated SV Tier 6 (thanks to Pyston)

PDA Update - General:
- Internal change of localization references to prevent currently active tasks to get broken after an update
- For single player you can find the Story Missions now in the "STORY" tab in the PDA (F1)
- PDA Random Default: Made clear that in COOP/MP it is not possible to set a core in a regenerated structure
- Added Chinese (simplified) for Robinson Protocol and other Missions
- Updated FR translation

Other Changes:
- Config.ecf: Removed "Range", "Damage", "AmmoCapacity", "AmmoType", "ReloadDelay", "ROF" from device because it will now be read from weapon itself
- Changed: Random placing of POIs and resources now excludes 200 (instead of 100) meters around the pole areas
- Added more detailed colliders on Ion Cannons (enemy turrets) and all player turrets
- When hovering with a drill/survival drill, we are now hiding the name of the deco item if Localization does not exist (this avoids to be distracted by strange names of deco items)
- Added AlienBug04 to spawn menu
- The white warp effect now lasts 5 seconds longer to hide the longer planet loading times
- Limiting number of blueprint parts to 32 to improve network traffic
- Debug weapons are now blue to better distinguish them from the epic weapons
- Better explanation for Special parameters (eg AllowBlueprintSV etc) in ExamplePlanet
- Replaced POIDistance with SpawnPOIAvoidDistance in all playfield.yamls

Bug Fixes:
- Fixed: Dead drones fall through terrain in some cases (especially MP)
- Fixed: Parasaur NPC sliding over terrain when trying to run away
- Fixed: Exception when you change to any option in the repair bay console
- Fixed: NPCs firing through wall (proper fix)
- Fixed: Turret targeting settings were not saved when creating a blueprint
- Fixed: Tent removes terrain
- Fixed: Server shutdown keeps processes open
- Fixed: Sometimes chunks of terrain were missing
- Fixed: Flickering on grass with "Low" SSAO setting
- Fixed: Mobile constructor starts crafting even if turned off
- Fixed: Players seated on a bike are shown as 'PlayerBike' in MP
- Fixed: Exploit when two players try to pickup the same block at the same time
- Fixed: Plants did not always continue to grow while a playfield was unloaded
- Fixed: Asteroid resource: Area limit of the asteroid resource did not match the new big planet size
- Fixed: When POI regenerates, NPCs remained in structure and sometimes were falling through the structure and could shut from below
- Fixed: After RT2 is performed any devices that are put back onto the vessel are not put back into the group they were in (MP)
- Fixed: Plants sometimes dying when returning to a base (MP)
- Fixed: Turrets do not attack alien POIs in some use cases
- Fixed: Game Start pages broken for Akua-Omicron and other scenarios
- Fixed: Exception when clicking between STATISTICS page and CONTROL Panel in a vessel
- Fixed: Exception when quitting with alt-f4 with open statistic screen
- Fixed: Display of correct planet stats with ad hoc playfield generation
- Fixed: Light Suit not protecting from RAD - round random radiation to nearest 1/10th
- Fixed: Techtree: Range info is missing from Weapons
- Fixed: Sorting Error with Tooltip and Tech Tree Window
- Fixed: Motion sensor breaks after placing & picking a bike up in the sensor area
- Fixed: Moving far away from a vessel that is using R2T & returning to it the R2T is not maintained whilst away.
- Fixed: Enter key not working in password dialog when connecting to a protected server
- Fixed: Missing description text for starter playfield in Default Random when multiple starters available
- Fixed: Mechanoid rotation + movement speed
- Fixed: Exception if Orbit has Instance Data
- Fixed: Repair Station could get stuck while in R2T Mode when no template is available
- Fixed: Sometimes it was not possible to repair a vessel (happened when no template was available)
- Fixed: Repair Station does not allow manual repair start & broken info for ingots
- Fixed: Back button does not work in Repair Console
- Fixed: Vessels not able to warp in some use cases
- Fixed: Exploit: Endless production of Energy bars and other templates
- Fixed: Alien Palm tree (Oranges) explodes when being harvested
- Fixed: Billboard appears too early for Cactus plant
- Fixed: Shared markers are visible on playfields they do not belong to (MP)
- Fixed: Resources & Time list in statistic window is not scrollable with mouse wheel
- Fixed: Problem that no NPC spawned in Sand biome on arid planets
- Fixed: When opening PDA, Log texts didn't update if not a chapter (but a task) was selected previously
- Fixed: Drone attacking base when player is away
- Fixed: Black square appears for split-second when opening sector map.
- Fixed: Several problems with colliders being at wrong position for NPCs
- Fixed: Possible network disconnect exploit for mod API: item add/remove, credits, full inventory update
- Fixed: Random exception after drone attacks
- Fixed: Epic Pulse Rifle was not colored correctly (grey instead of red)
- Fixed: Constructors still using old "On/Off" Buttons
- Fixed: Possible network disconnect exploit for mod API: item exchange
- Fixed: POI spawning on Temperate planet > now EpsilonAuxT1 and EpsilonDefence POI will spawn close to Bunker
- Fixed: UI Highlight showing incorrectly/not showing when item is being dragged during enable/disable event
- Fixed: Some materials/textures on deco plants (were over bright)
- Fixed: Problem with AtmosphereFogRange in +ExamplePlanet dynamic playfield
- Fixed: PDA exception when loading old savegame
- Fixed: Hover Info 'Effective Against' is shown as KEY not as LOCA
- Fixed: AI Vessel : patrol in Long range management not updating next destination
- Fixed: missing description and additional info for Shadows of Starlight and Default Akua-Omicron scenarios.