You must help a character to escape a futuristic complex by hacking bio-electrics facilities. The character progress is controlled by the game, the player help hacking the systems by resolving the corresponding systems. Hacking may help to a open locked door, access chests or modify the defense behavior in their favour.

Here is my new video game project, "Electric Mind Pulse". In this game, you must help a character to escape a futuristic complex by hacking bio-electrics facilities. The character progress is controlled by the game, the player help hacking the systems by resolving the corresponding puzzles. Hacking may help to open locked doors, open chests or modify the defense behavior in your favour.

The game is developped for Windows/Linux/Android and it is possible to test preview in WEBGL. I'm using Unity which handle the multi-platform things well. I also use bfxr and Sunvox to make the soundtracks and at last a pen and paper.

I separate the game development in 4 steps :

These steps are important for me, they are focused on 4 independants parts of the game, they make me feel that the game is easier to finish and it is easier to share progress too. This way, I hope I'm trapping myself to keep motivation complete from start to end !

Today, I'm a 90% completion of the Lock Puzzle, and I think 20% of the whole game. Lock puzzle is the one that will allow the character to open chests and get a cool bonus.

This lock puzzle is procedurally generated from a unique parameter : "difficulty level". The number of notchs to align and the difficulty to identify them increase with the level. Three skins are implemented to give some diversity. Every eight levels we have a special level that can mix the three skins in the same puzzle !

For the moment, in order to test the procedural generation (and because of the lack of all other part of the game !) the game looks like a "survival" where you fight against time and overload to solve the puzzle. Each time you resolve one, difficulty increase. Later, when the map part of the game will be available, the puzzles will be dispatched on the chests with a difficulty matching the bonus they protect. 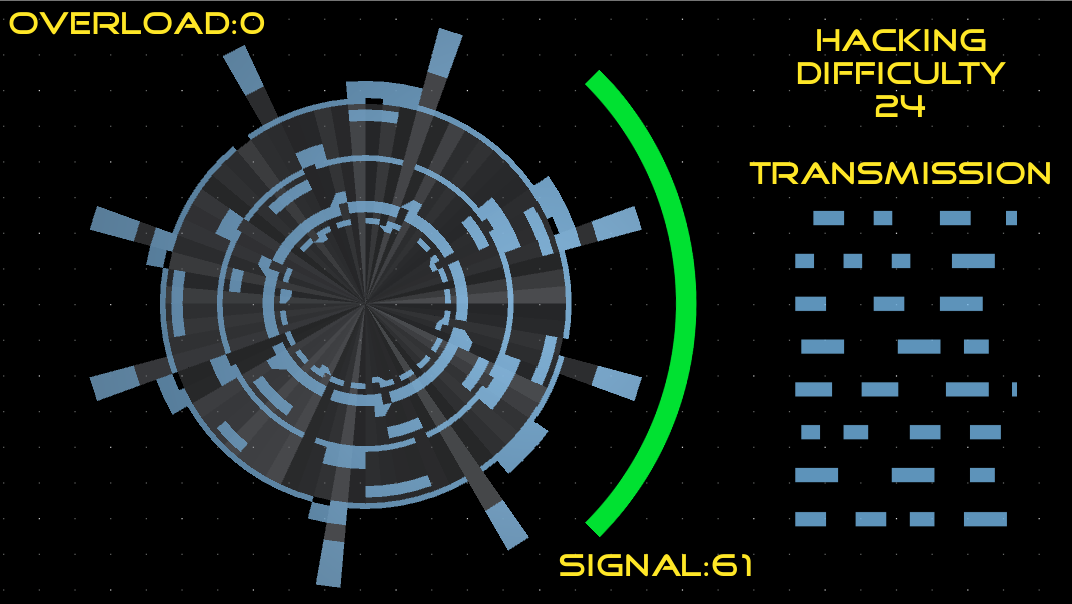 The last 10% to do on the puzzle is the "Transmission" part (which is not active now) and the sound fx / soundtrack.

I keep a devblog up-to-date, where you can find some news about the progress, the difficulty, choices and acheivement 2 times a month. You can also follow me on twitter where I share information about gamedev or hot updates.

What do you think about it, guys ?

Lock puzzle of Electric Mind Pulse is finished, I'm at 30% of the whole game...