Egg-Fu Master is a Free-to-Play 3D side scrolling platform game, and probably the best platform experience for iOS, made in the same spirit as Super Mario and Sonic the Hedgehog.

Goal
Your goal is to become a master of the ancient art of “Egg-Fu” by completing the 36 levels and obtaining the “Egg-Fu Master Black-Belt” and “Kamikaze-Ninja Bandana” under the watchful eye of you teacher “Master Tamago”.

Achievements
Collect achievement stars by finishing a level fast, collecting coins or finding, collecting and finishing with the letters “M-A-S-T-E-R”!
When you finish a level for the first time, you unlock the next one and make that playable.

Gyroscope
Using the gyroscope´s tilt functions of your device, controlling the game is easy and fun.
Your fingers won´t obscure the screen while playing and it doesn´t matter if you are right or left handed.

Advanced Egg-Fu
Learn more about how to play in the tutorials section. Advanced Egg-Fu is a playground where you can try out some moves in an almost safe environment

Beautiful 3D
Egg-Fu Master makes use of the retina display to render its beautiful 3D environments in high resolution. Although the game plays like a 2D game it actually is made in 3D. This gives a high quality gaming experience to rival those games available for Nintendo 3DS and PSP Vita.

Shop
Visit the shop to buy levels or upgrade your in-game-health!

Free
Six levels are free for you to try! So what are you waiting for? Download it now and try it out for yourself!

Egg-Fu Master is a Hardboiled Platform game in the spirit of the Italian Plumber and Blue Hedgehog games.
Become an Egg-Fu Master by finishing all 36 levels under the watchful eye of Master Tamago, the best teacher of the ancient martial art of Egg-Fu in the world. Quest through fun and dangerous obstacles courses to complete your training and to receive the legendary “Egg-Fu Master Black-Belt” and the “Kamikaze-Ninja-Bandana”.

Egg-Fu Master is a side-scrolling game made in beautiful 3D optimized for the Retina Display of the iPhone and iPod, but will run smooth even on an iPod 3g. The “tilt-and-tap” controls take full advantage of the gyroscope. Once mastered, they bring an intuitive and rewarding playing experience. It also makes the game uncluttered by the players thumbs and plays equally good whether a player is right or left handed.

Players can collect achievement stars by finishing a level fast, collecting coins or finding, collecting and finishing with the letters “M-A-S-T-E-R”.Six levels are free-to-play with an In-App-Purchase option so players can evaluate the game before buying and even top up on their health for an easier gaming experience.

Even with optionally upgraded health, Egg-Fu Master is still a challenge for platform affectionados that are tired of “flat crap” and stupid “one-button-gaming”.

About Fingerfunk
Fingerfunk is a small independent developer from Stockholm, Sweden formed in 2010. Members Niklas and Satrio have a long experience in creating interactive experiences, commercials and code since the early 90’s through other companies. Satrio was diagnosed with peritoneal cancer in september 2010, but pulled through thanks to help from family, friends and the drive to create games and graphics.
Fingerfunk.se
Egg-Fu Master AppStore:
Itunes.apple.com 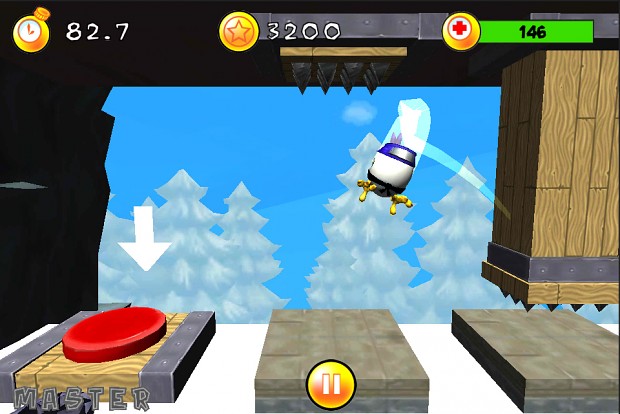 A Hat in Time Platformer