In this update, we provide a glimpse into the background of the world and speak about the Gods - as requested by our community.

Before one can understand the Great War, one must first understand the Circles. The many and varied deities of Dilogus can be ranked into three broad categories. The Inner Circle contains the oldest of the gods and the creators of the world. The Outer Circle consists of the “active gods”, the deciders of men’s fate and the elemental essences that make up the world. Apart from both circles are the Half-Gods; the bastard children of the Inner and Outer Circles.

The Inner Circle is comprised of Dhil'Aeghas (pronounced as Dilogus) who made the world and everything in it. Limula, sister to Dhil’Aeghas brought growth and time into the newly created realm that Dhil’Aeghas had made. From Limula came Zurumesh and Tii, brother and sister, gods of rebirth and neutrality. From Dhil’Aeghas came two sisters, twin but opposite; Geona (goddess of faith and balance) and Liamvastee (goddess of the void and abyss).

The Outer Circle contains six gods, each one bound to an element. These six elements, when kept in check by one another, make up the world. Almost 1300 years ago, one of the twin sisters, Geona, created the Balancing Stone that would ensure that balance would always be maintained. Who so ever held the Balancing Stone held the fate of Dilogus. With the power to control the elements the Stone would keep the world safe, always ensuring that no one element became too powerful. Geona gave the artifact to her father, who knew that protecting it meant protecting the world. 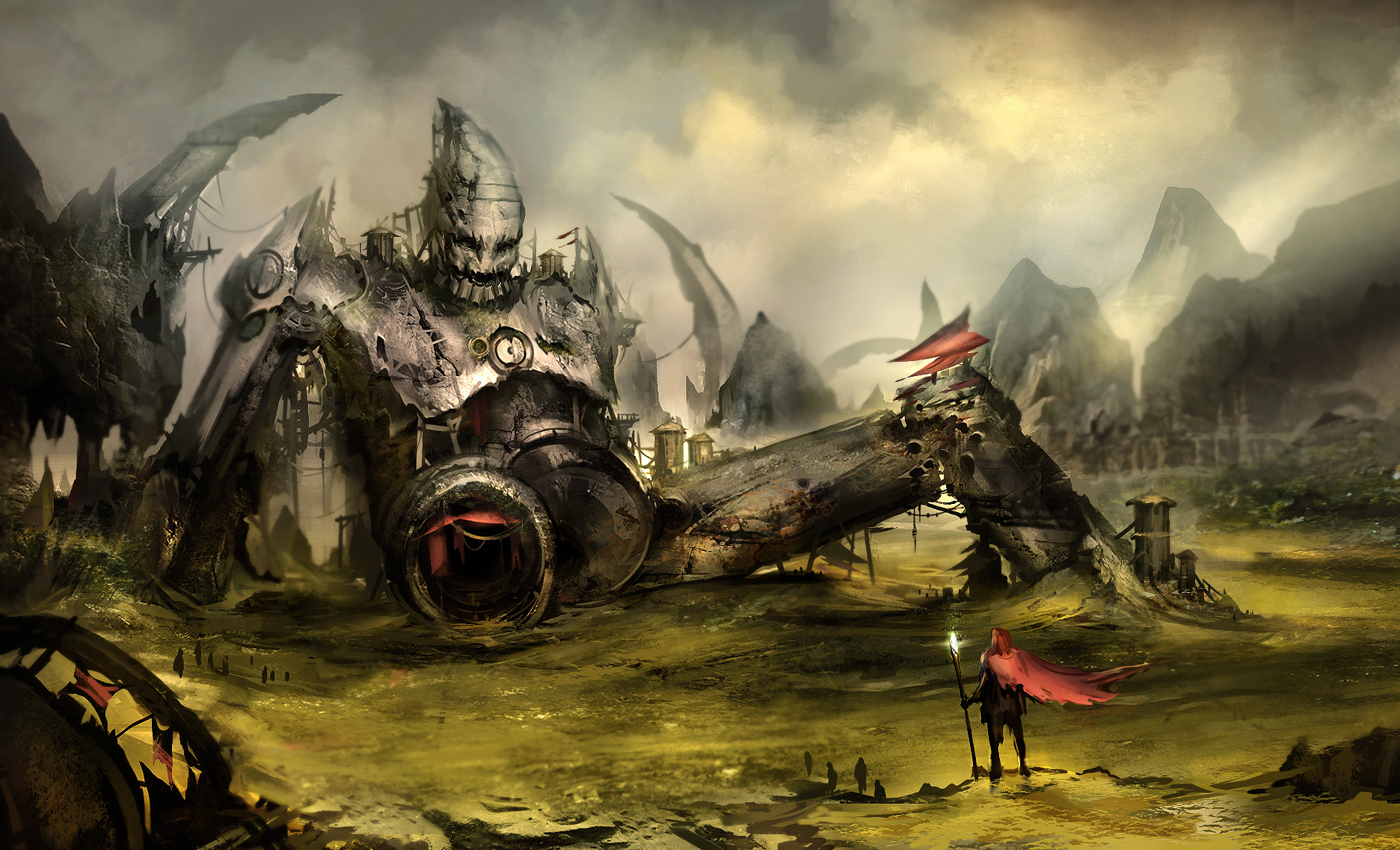 an Anorean Guardian fallen in the Great War, now inhabited by rebels

When Liamvastee (sister to Geona and daughter of Dhil’Aeghas) learned of the Stone and its power, she became jealous. Surely she, who had seen into the void where the end of all things lie, should be the one to care for the fate of the world. Dhil’Aeghas however, sensing his daughters ambition, refused to give it to her. Instead he gave it to a race of mortals, the Azarthians, for safe keeping. They alone understood magic and knew the responsibility of power. When Liamvastee discovered this, she become enraged. She forced her father out of the world, banishing him to the darkness of the abyss.

Liamvastee then tried to take the Stone for her own, but it was given freely to the mortals and it was now theirs to keep. No god could take it. So Liamvastee began to search for followers and found the Dargonians. After bestowing blessings and gifts upon them, they agreed to fight for her and take the artifact. If her worshippers could claim the Stone, Liamvastee could take the power for her own.

Learning of her sisters betrayal, Geona knew she would try to take the Stone. She began to build an army of her own to counter that of her sisters. The Dilogian Humans,and the Thirillien answered the call and came to the defense of the Balancing Stone and the Azarthians. For 1120 years they fought until finally, Liamvastee pushed Geona’s forces back far enough to claim the Stone for her own. 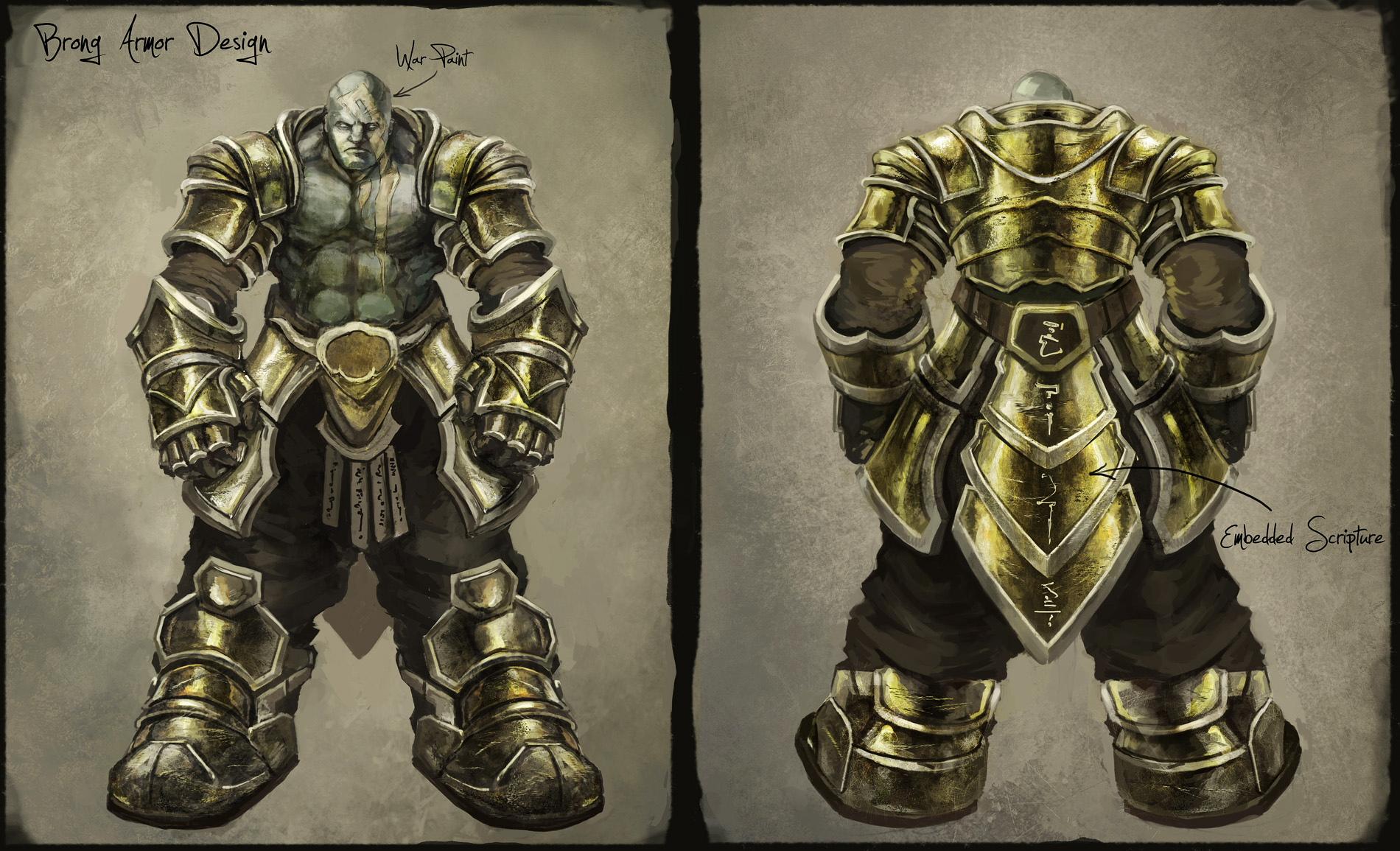 a Brong elite warrior, one of the finest soldiers of the Great War

Realizing that protecting the Stone was to be held above all else, Geona knew what she must do. Just as Just as Liamvastee’s forces were about to claim the Stone, Geona struck it with all her might and cracked The Stone. No longer bound together, the elements flew apart, eager to be free of one another. As the Stone broke, Liamvastee was wounded and began to bleed. Where her blood touched the ground sanguine crystals, now called the Blood of Liamvastee, grew.

Breaking the Stone had cost Geona her place in the world. As she wept her tears became the gems that the people now call the Tears of Geona. With the Stone broken the Inner Circle was cut off from the world and the gods of the Circle confined to their pantheon.

If you would like to follow our progress, you can Watch the project or tune in with one of our community sites. Another option is to have a check in at our Blog and Forum.

This story reminds me of the greek gods and their way of life. Betraying, loving, guarding and so on. A truly epic piece of work and well explained. I hope that we will continue to get historical updates on the Dilogus Universe, and hopefully get some ingame screens soon.

Indeed it was a bit inspired by various mythologies. And yes, this is only Part 1. We'll provide rich lore here, but as well on our site and Dilogus wiki soon.

Ingame screens take a bit of time to get them right. As you know we've recently started development, and currently we're working hard to define a lot of things, coming from art style, gameplay style, music and so on. A game without a well defined style is nothing, and I'm sure you agree with that. But I can assure you it's going to happen soon. Thank you for your patience.