Dark Signs is an online multiplayer hacking simulation game where you participate on a virtual Internet that is created and sustained by it's players. What gives Dark Signs it's power is the flexible in-game scripting language. Players can craft their own tools to interact with the environment. Commonly scripted tools include hack scripts and scanning tools. The world of Dark Signs is changing constantly as players interact with servers in the game. Dark Signs features both player user created missions, as well as server generated missions for additional gameplay. Players can register their own domain names and upload files, which can then be seen by everyone else in the game. Buy and sell tools in the DarkStore, root servers, crack passwords, and break through firewalls. Inside Dark Signs you will find an almost endless number of commands and functions that can be used to create almost anything. 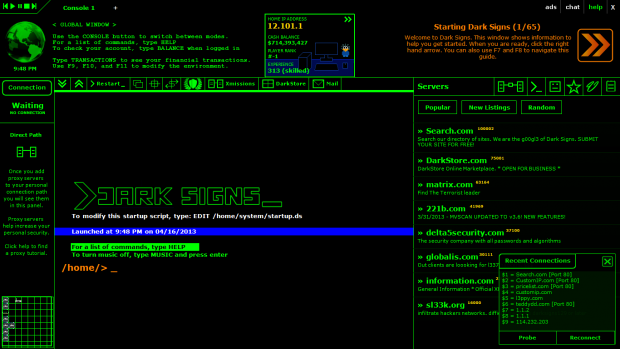