CONFLICT: Omega is a post-apocalyptic MMO project under development by VoodooFusion Studios

Was the world destroyed by a corporate biological mistake or by eco-terrorists, bent on the destruction of capitalism?? Choose your side and fight!

Our group is attempting to mix the genres of the post-apocalypse, survival horror, FPS, RPG and RTS' While this may sound like a "kitchen sink" approach, we feel that the mixing of game capabilities that will yield the most freedom and immersive gameplay'

Players can also choose from one of 3 races:

The game will be centered in PvP throughout a large world with high-tech corporate Cities, rust-tech outlander cities'''as well as a post-apocalyptic wasteland'

VEHICLES:
Vehicles from muscle cars to trucks to motorcycles to whatever will be drivable and play a key part in transportation' They will have moddable parts which can be tuned for performance, speed, terrain, and body armor'

REAL TIME STRATEGY:
The wasteland will be filled with resources like oil, gas, energy, food, metal and scrap tech parts' Claiming these and extracting them on an ongoing basis will be necessary to fund your clan as well as its domination of the map'

PvP DOMINATION:
The goal, of course, is to rule the gameworld' Trust us, existing will be hard enough as it is' A clan will gather resources to finance and build an initial "forward base'" To this base, other bases that increase group statistics (damage, healing, communication) can be added' Of course they must be defended as well' Populate the map with your clan's bases and keep them'

Bases can be destroyed or taken over in king of the hill type matches that require skills like demolition and hacking, as well as others'

BASE-BUILDING:
A clan will gather resources to finance and build an initial "forward base'" To this base, other bases that increase group statistics (damage, healing, communication) can be added' The result is a 3d militaristic base which will show up on the map' Of course they must be defended as well'

Buildings can be modified with various walls, towers, security cameras and other options in addition to buildings to add functionality'

PLAYER VS ENVIRONMENT:
A full p-a world with many twists to include radiated zombies, a host of mutated creatures, outpost settlements of traders, gamblers, weapons merchants, and much much more'

We are taking the original 2d Wasteland, Fallouts 1 & 2, as well as The Terminator, BladeRunner, Logan'sRun, MadMax movies and a whole host of p-a cannon to pull together what we feel will be an engaging mix of skill and art'

Ok, well perhaps extravaganza is overstating it, but they're here for you to enjoy!

Thanks to team member Pankake who did the , the uv, the skin, and the render scene for ALL of these lovely wastelander armaments! 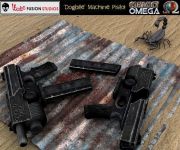 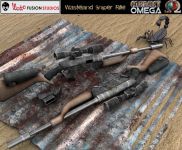 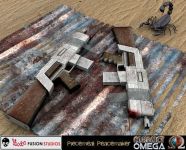 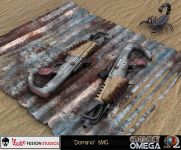 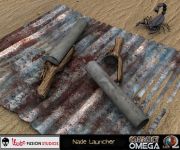 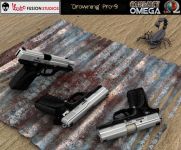 The driving design behind the wastelander weapons is that beggars cant be choosers. Sometimes weapons have to be improvised or ammunition scrounged.

We are currently seeking talented, experienced members to join our team in the following areas: organic/character ling, concept art, texturing, and mapping. We have a great team already but need more to make this even better. Be a part of something we feel will be truly remarkable...join the COBNFLICT: Omega team!

Thank you so much for the emails and comments we've been getting in support. Come see more images of new weapons at the homepage for CONFLICT: Omega.

VoodooFusion Studios is proud to release it's first formal media release for CONFLICT: Omega, a standalone, post-apocalyptic MMORPG project. For...

Almost 13 years ago. But the weapons shown on this page are cleaner than what Treyarch produces in their CoD games lol.

Welcome to the 8 years club.

It may had been a nice game xD

mabey the mod isn't but they are

Nice models, dead game... Can they be used for something else?

lets face it... dead as my gradpa

I dont know why am I even posting this, but last "working" site connected with this umm... rotting corpse of once interesting project can be found on www.voodoofusionstudios.com ... as you can see, last update is from march 2008, telling us that programmers are hard at work... well I guess after about, what... 10 years of development, they should have the game finished 10 times now... but anyway, who the hell cares (except for me I guess :)

Link doesn't even work, this mod is in heaven.
Or hell, dunno where dead mods go.

sounds good, but will it be a freetoplay game or something where you have to pay monthly?(i hope the first, because i think this game is a good idea and new too, and i really want to check this out, xD)