Cities: Skylines is a modern take on the classic city simulation. The game introduces new game play elements to realize the thrill and hardships of creating and maintaining a real city whilst expanding on some well-established tropes of the city building experience.

From the makers of the Cities in Motion franchise, the game boasts a fully realized transport system. It also includes the ability to mod the game to suit your play style as a fine counter balance to the layered and challenging simulation. You’re only limited by your imagination, so take control and reach for the sky!

Working on a skylines mod, add it here to begin promoting it today! We also support maps, models and all other types of user made content, you can add your files here.

With Natural Disasters now available for Cities: Skylines players worldwide, Paradox Interactive and Colossal Order want to take a moment to remind the world that disasters aren’t just about destruction -- there’s a lot to be done when it comes to rebuilding, too. Beginning December 15th - Paradox is coordinating a 48hour stream with the proceeds going to worldwide disaster relief charities.

Disasters in reality aren’t fun for those involved: while we have the luxury of taking our time to point and click to rebuild our virtual communities, rebuilding the real world involves a lot of hard work and financial and emotional support.

To that end, we are challenging some of the most talented city-builders we know to help us do some rebuilding in the real world, with prizes for their communities and donations to disaster relief organizations worldwide. For those that want to join in, our Twitch streaming schedule is as follows (all times are in PST) we look forward to seeing you there: 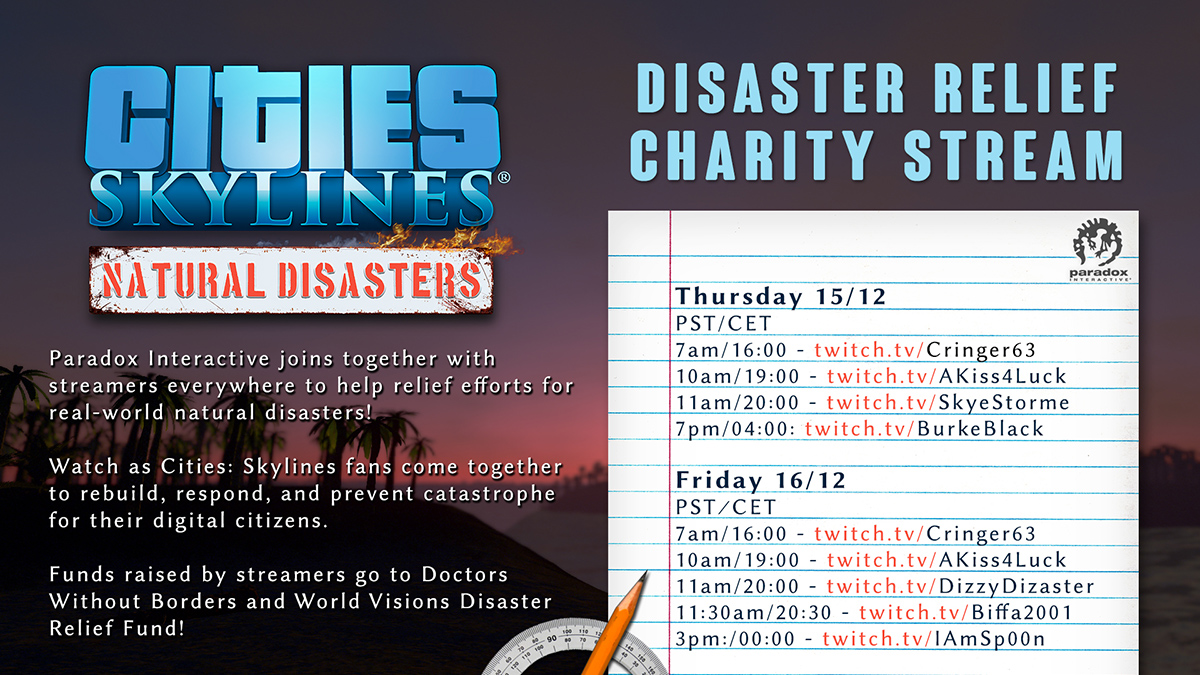 Win Cities Skylines by telling us what natural disaster do you want to reign down?

Natural Disasters features a catalog of catastrophes to challenge mayor-players everywhere, including planning with early warning systems and emergency...

First Deco-inspired downloadable content for Cities: Skylines to feature creations from one of the game's talented modders.

Cities: Skylines has received a birthday patch on consoles and celebrates 12 million sales. With a vibrant UGC history, here's five mods from Paradox's...

You may have noticed we have teamed up with Paradox Interactive to promote the Cities: Skylines After Dark expansion. To celebrate the launch we are cooking...

Please update this page. Lots of DLC have been released since then and modding assets have been like cancer since then.

Nice!! but i don't have Natural disaster DLC :-(

Everthing about this city builder functions perfectly as you'd expect and more. For instance, one thing speaks to how much thought has and may continue to be put into this game: the ability to close off a body of water with a dam, build pumps in it, and drain it. A short while after draining the body of water, grass soon grows on what was once dirt and you can plop down more city. You can even put sewage pumps along that area beforehand, remove the water pumps before turning them on, and flood your…