Call of Cthulhu: Dark Corners of the Earth

Call of Cthulhu -- Dark Corners of the Earth is a first-person horror game that combines intense action and adventure elements. You will draw upon your skills in exploration, investigation, and combat while faced with the seemingly impossible task of battling evil incarnate.Other than fighting, you have the ability to interact freely with characters and the gaming environment. To increase the sense of immersion, there is no interface or 'HUD' on screen at any time during normal gameplay. Set during the 1920s, Call of Cthulhu is based on the Cthulhu Mythos of HP Lovecraft, an American writer of fantasy and horror. A diverse range of cutting edge special effects is utilized to ensure both unprecedented levels of realism and an exact portrayal of your mental degredation.

Games : Call of Cthulhu: Dark Corners of the Earth : Files

This is an executable for patching the dark corners of the earth executable, script and shader files. Only the original retail executable can be patched for most of the changes due to the Steam and D2D executables being protected (although the GOG release has the xml at the same location so also works). The key fixes are: The Blue light bug reef bug is fixed using a shader fix provided by Guzz. Most of the script timing errors resulting in crashes and the speed problem in the final chapter are fixed by the fix provided by GOG.

This is an executable for patching the dark corners of the earth executable, script and shader files.
Only the original retail executable can be patched for most of the changes due to the Steam and D2D executables being protected (edit: the GOG release has the xml at the same location so also works).
There are two ways to get around the blue light bug now that work on all versions of the game:

[Just as a note I sought permission from both Guzz and GOG and they both were happy for their fixes to be included here.]

New in 1.7 is:
The limit to 60 FPS as fixed by GOG which fixes most of the problems with script timings which people see when their FPS is higher than this.
You can now apply this to the original retail version also (it's out there but you'll need to find it yourself).

New in 1.5 are:
Options to unlock all difficulty levels and all cinematics after you next start a new game.
Give all weapons at the start of every level.
Double the amount of time given for each stage of the escape sequence. 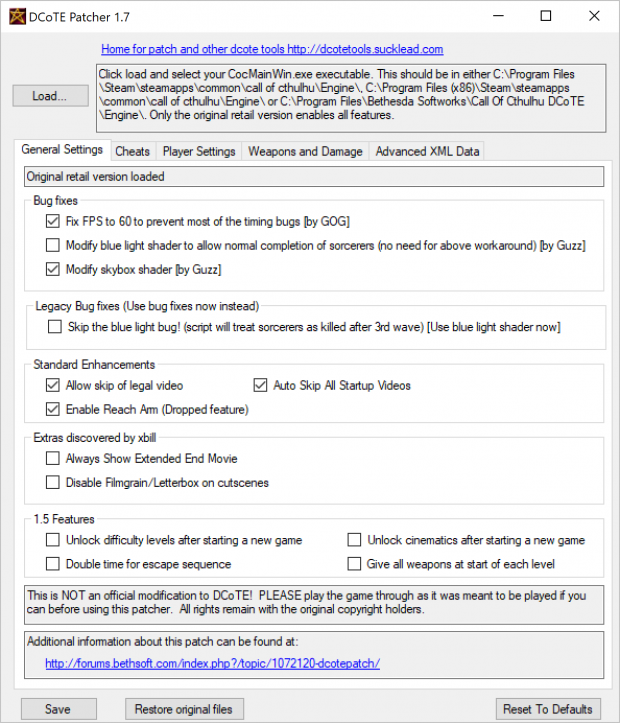 Nice one :-D Tx a bunch to everyone who made it

The patch well adds the ability to save anywhere, if the "enable debug mode" is checked on the "cheats" tab.
But the number of saves does not seem to change - I did not find. Probably there was an option with the XBOX, only 6 pieces of saves and write over. Or is it possible to increase the number of saves, can anyone know?