CaesarIA is remake of Caesar III in the big world of Ancient Rome. You can build the small village with some of gardens and a workshop where you want. You also can perform tasks from emperor or build the large city and broke attacks of barbarians, Egyptians or carfagens which want to steal your goods and kill your citizens! You also can pass the company from original game. The good lock with high walls will help to cope with any invasions.

The fighting system of game continues and develops the principles from Caesar III. Legions of soldiers can be sent to any point of the card, but don't submit to direct instructions of the player, and work independently. Depending on a situation soldiers can recede or be reformed for the best interaction.

The agriculture, extraction and production of goods will demand adjustment of production chains and if the necessary goods can't be got in the city, your trade partner can always sell it to you using land or maritime trade routes.

Current state
+ Now it is possible to download the game alpha version.

CaesarIA realizes all main mechanics, but still some important features aren't made yet completely, for example:
- the relations with emperor and gifts,
- wrath and blessings of gods,
- realistic financial system (salaries, purchase of goods, job search)
- specification of citizens, preservation of parameters of thoughts and formation of requirements
- seamlessness of the world
- computer players (cities) and simulation of a distribution network
- network (web/local)

I hope that the previous post Back-Engineering Caesar III, with the description of the algorithm of creating textures from the resources of the original game was welcomed by the inhabitants of habrahabr.ru. This article describes the format of maps, algorithm of selection and order of tiles for drawing, creation of the final texture. 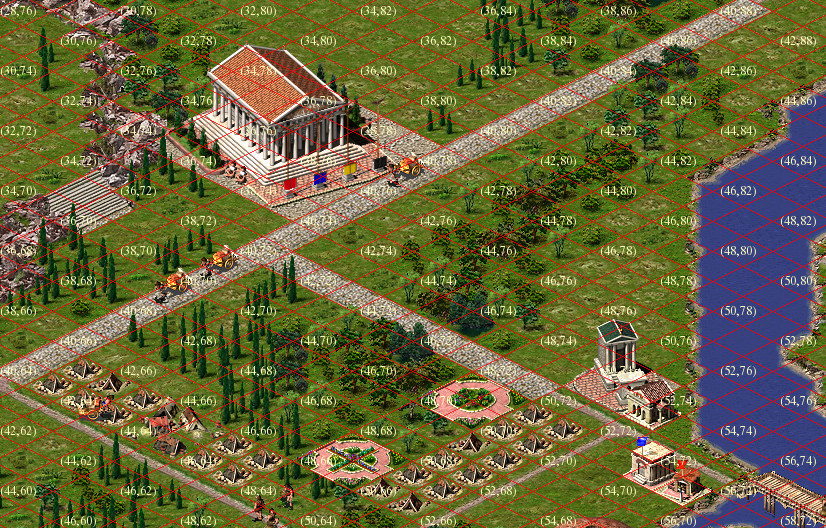 If you are familiar with tiles you can skip the following part of the article.

Tiles
Tile is a picture of a fixed size created so that while you draw near other tiles you don’t create any “stiches”. Here is an example of grass from the game Caesar III©

If you put them together in a definite order and add a little bit of texture with trees then you’ll get some part of surface. And if you add to this picturesque image another kind of tile, say, the one that depicts a road, you can put together a basic map. 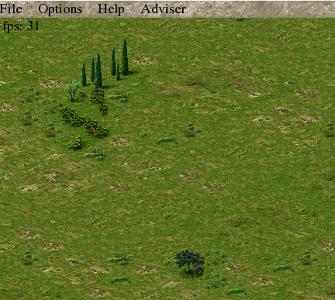 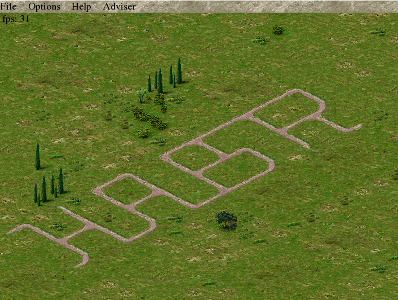 You have probably noticed that the presented tiles have a shape of a diamond not a square. The purpose of this is to create the image with dimension (depth). That kind of tile looks as if it was turned to the viewer and as if it spreads to the depth, bidirectional image gets third dimension. To create the effect of dimension the width should be two times less than the length of the image. Tile base in the game Caesar III is 58x30 pixels, this is the minimal size of the tile which is operated by the game engine. On the first phases of remake creation we got one unpleasant effect, textures in the game are created without taking into account transparency and when displayed on the screen without additional processing we got the following result. 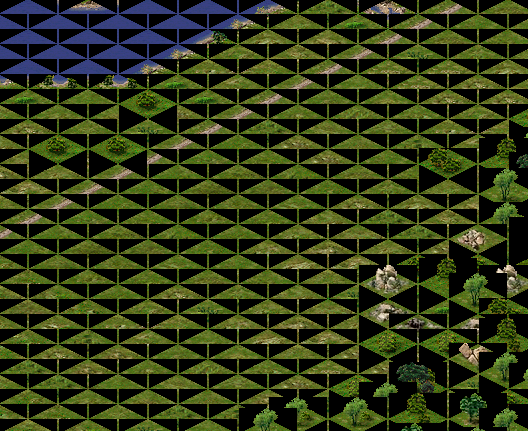 The way out is as follows: you can use a mask, for example the color of the farthest left symbol is taken as transparent or textures should be complemented with an alpha channel. In the original game we used the first option, in the remake – the second: textures are prepared at the stage of resources upload.

MapMap is an array that defines the position of the tiles on the layer and their parameters. In the simplest case the map is a matrix MxN with each element having an identifier (number, figure) from the so called “tiles palette”. Tiles do not necessarily have successive position number, numbers of tiles are divided between several intervals and named areas. Thus, for example, tiles of earth, trees, water, cracks and grass have the indexes from land1a_00001 to land1a_00303. In the game Caesar III it is allowed to use square maps from 30?30 to 160?160 tiles. Tiles are positioned the map so that its upper boundary is the “north”. 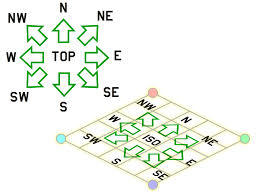 In order to draw the tiles on the screen it is important to take in account the distance to it, if you just draw tiles in the order they are placed on the map you’ll get a misconvention because some part of tiles was not drawn in time. 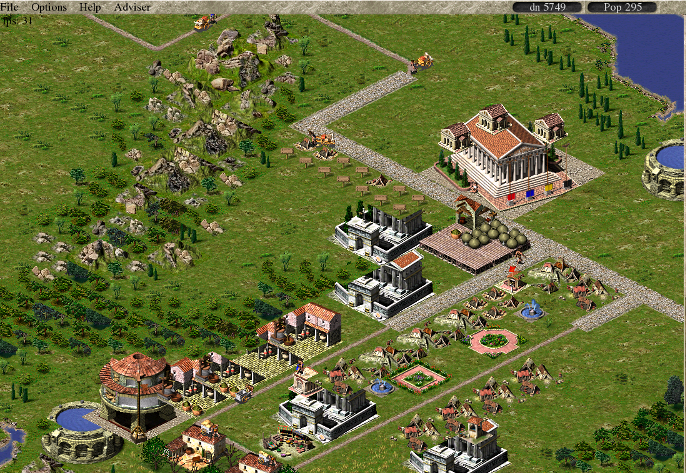 The order for drawing tiles is shown by the following image.

This image is generated from the following tiles drawn in the correct order. 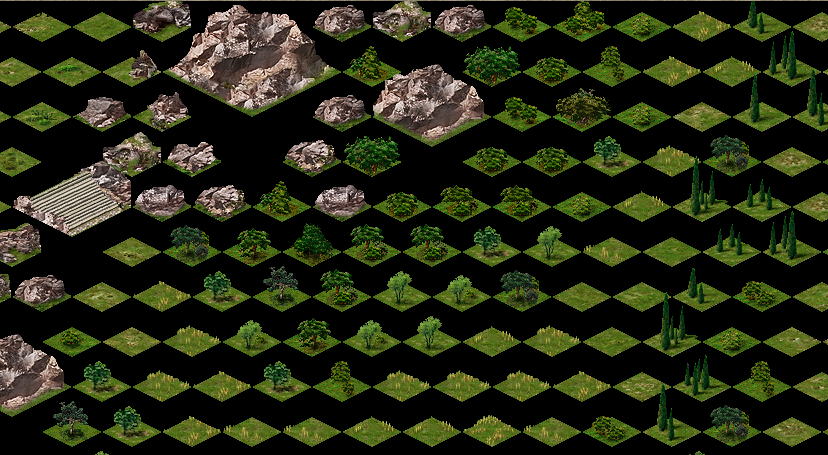 
These conditions complicate the process of drawing and create additional rules for drawing. 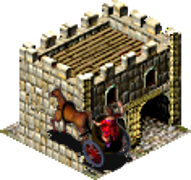 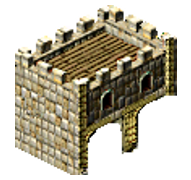 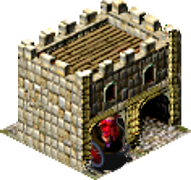 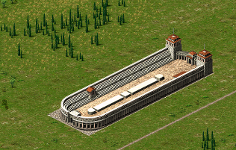 
Map format of Caesar III
The objects that are shown in the town in file *.map include first five data blocks. Read from the beginning of the file, read the data one by one without gaps.
short tile_id[26244] — contains identification elements, each identificator corresponds to its texture. For example, identificators group 246-548 corresponds to textures land1a_00001-land1a_00303, these are textures of earth, trees, etc., which were described before.
byte edge_data[26244] — the array contains information about the size of the object which has texture in the array tile_id
short terrain_info[26244] — the array contains characteristics of surfaces for each tile, earth, water, road, wall, etc. (complete info here)
byte minimap_info[26244] — basic info for creating a mini map, it also takes part in some calculation during the game as a so called array of “random numbers”.
byte height_info[26244] — this array describes the height of the tile over the surface, 0 – for land, 1 – 15 pixels, 2 – 30 pixels and so on.

Application
More details about the game Caesar III© and the development of the remake can be found on our wiki at bitbucket.org.
Special thanks to Bianca van Schaik for help in writing the article and providing materials.
And in the end a small test screenshot that depicts Etrurian spearmen vandalize the City of Fountains: 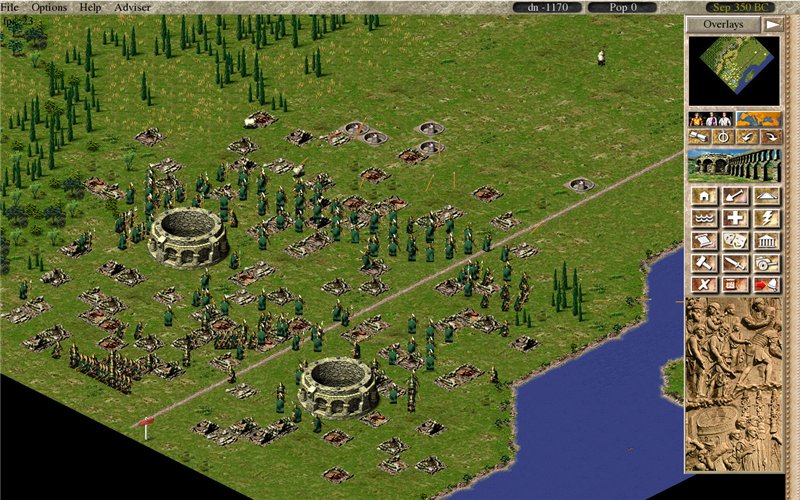 Add campaign for my game in Indiegogo. Caesar's remake need your voice!

In the latest revisions I achieved stable operation of the game in a large map (up to 512x512 tiles). The original game does not support maps more than...

Hey! Here we go with another big update which mostly contains stability fixes + a couple updates of the content of the game. Let's go straight to business...

Hey! Here we go with another big update which mostly contains stability fixes + a couple updates of the content of the game. Let's go straight to business...

This is another huge update for all you Caesaria fans. Let's go straight to the subject. First of all, what was fixed: - Fixed sound processing while...

This is another huge update for all you CaesarIA fans. Let's go straight to the subject. First of all, what was fixed: - Fixed sound processing while...

Summer is here! In this update we've fixed a lot of minimap bugs, some other minor issues and added new content. Check this out: + Added textures for...

Summer is here! In this update we've fixed a lot of minimap bugs, some other minor issues and added new content. Check this out: + Added textures for...

Tried every android version but crashed after showing "initializing animation" .... and sorry for the bad english......

what do i do for taking part of staff of language conversion?

Hey I got some questions:

1.Why people walking are so slow even ve make 0 speed.
2.When people come to live in my city they just go away even if they make it to lot!

I know remarking a game is a very hard thing but this issues gotta to be fixed I got 95 pop and 69 empty lots even people coming to live in that lot!

It is good to know someone is remaking this awesome game!

Hey i tried the one for android i could install but i had black screen, please tell what could it be or what i need i can't wait to play caeser 3 in my mobile phone it's like a dream for me : ).

hello I was just looking though all of your images what a rush of Déjà-vu! :D I also had a small question, in the description it said "- seamlessness of the world" I was just curious what you meant? do you mean like a massive world map where you can see other nations and cities?

CaesarIA (Windows,b1577) can't play. it's say "This appliction has failed to start because libpng15.dll was not found. Re-installing the application may fix this problem." what happen? i have download all file.

nice that you guys are remaking it , really worth rome based game.