WHO’S THE BOSS? It’s finally you! One big, bad, player-controlled Boss goes against a team of Vikings, each with special abilities. Enter BOSSGARD, a hectic 1 versus 5 bossfight multiplayer game in which you get to crush your friends as THE BOSS.

Post tutorial RSS Bossgard - How to release your game live on stream!

Last week we released Bossgard in Early Access and we decided to organize a live release on Steam Broadcast. We learned a lot in the process and we felt we could share some of our new know-how. Here's how it went... 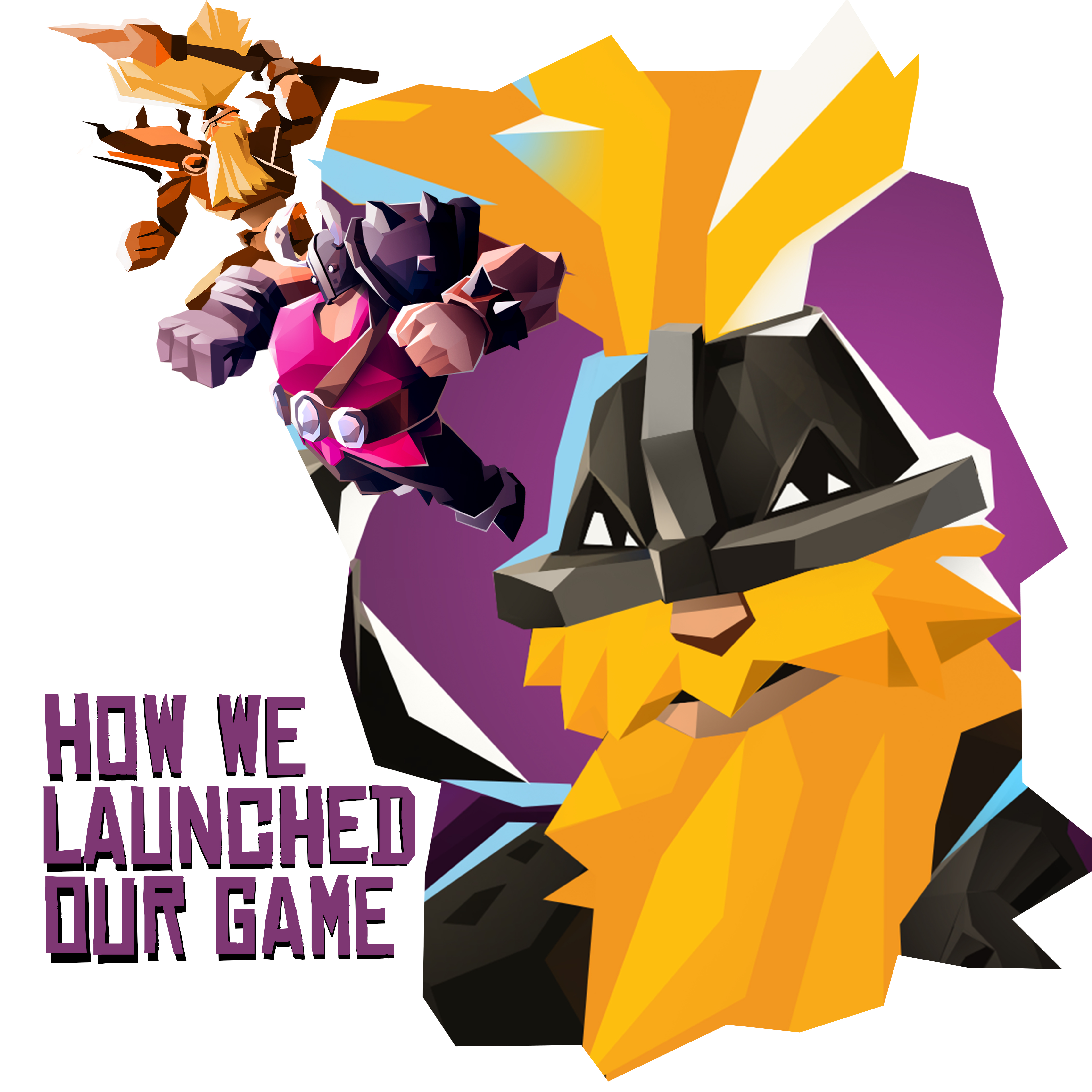 I know more about code, modeling, designing and finally making a game, and less about publishing one. My experience in these matters, such as it is: This is the second title I’ve been developing, the first was published in 2017 by an experienced publisher (Square Enix) and most importantly, it had proper launch budget (which I’m not allowed disclosing or discussing).

I’ve gathered here some of the things I’ve learned lately and put them together. Of course this is not a guarantee for a great launch, just what I believe is the best option for an indie studio with limited resources like my own. Also, throughout this post I’ll use examples that worked for the title I’ve just released last Thursday.

Last, but not least, this is going to be quite a long post! Fair warning has been given, let us begin now!

The greatest risk we all face when launching on Steam is getting our game lost in the huge abyss called The Steam Store. Yet, nobody knows exactly how this black box works.

As a developer that has just launched her game last week on Steam Early Access I’ve gathered and tested some insights about how to get featured by Steam.

Although I’ll briefly mention some of the most important here:

this post is about how we used Steam Broadcasting to push and finally get some store visibility for the release of our game.

Short answer: We used Steam to broadcast a 7 hour Launch Stream Marathon. You can fully see it here:

We wanted to have a live stream not only in Steam Store but also in Twitch, so we used Restream & OBS for that.

Here is a useful link provided by Steam on how to set up your broadcast. Here is a link for Restream. It’s free, and as far as we know, the best way to simultaneously stream live video to more than one platform.

In terms of OBS setup, we have used its powerful option of setting multiple scenes with different arrangements (I/O). We had scenes set up for every part of our program plus a couple of pause scenes. Each scene had its own image overlay with info about what was going on. Some of them had video insertions, some game and some live camera. And the best thing, everything was remote controlled by one of our colleagues (zee direktor). So no more stretching over the table or leaning to one side to fiddle with OBS. Yeey!

2. We promoted the Livestream. Where?

3. We’ve sent invitations to about 15 local streamers and made a schedule of the event.

A long stream works best with a schedule. And with professionals! Our guests, 2 Romanian content creators, joined our effort not only by being present, but also by co-hosting our stream on Twitch. They were both suuuper nice and helped immensely! Many thanks to baabuska and Bobospider.

You can make good use of Steam interface and customize the Steam broadcast. It’s a great place for showing up what’s happening as lots of viewers might drop in at any time. The minimised broadcast window that appear on your Steam page might look like this after customization. 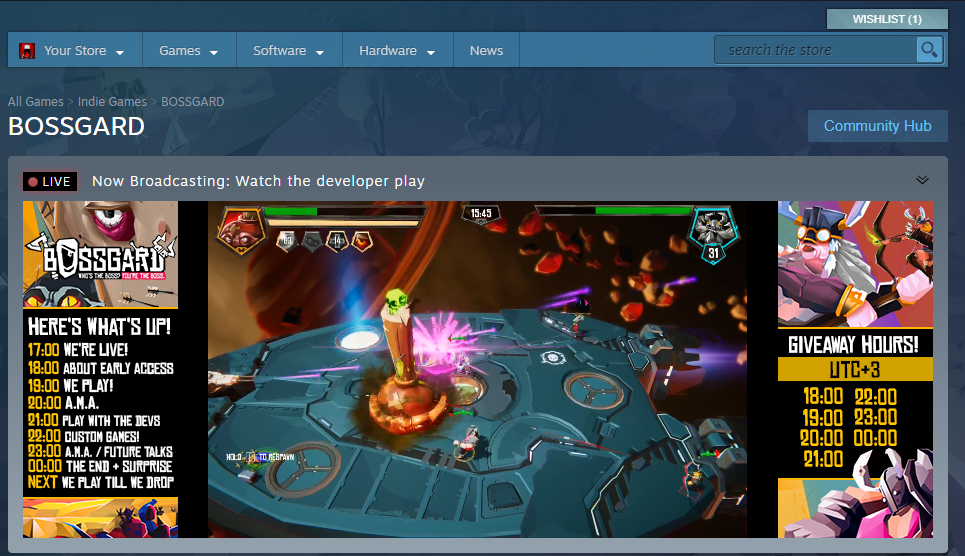 The stream focused, as expected, on the game. Lots of “let’s play” moments periodically followed by “giveaway” intermezzos & some other actions to spice things up:

In order to jump from one session to another OBS allows you to make multiple scenes. You can custom up as you want. Here are some examples. 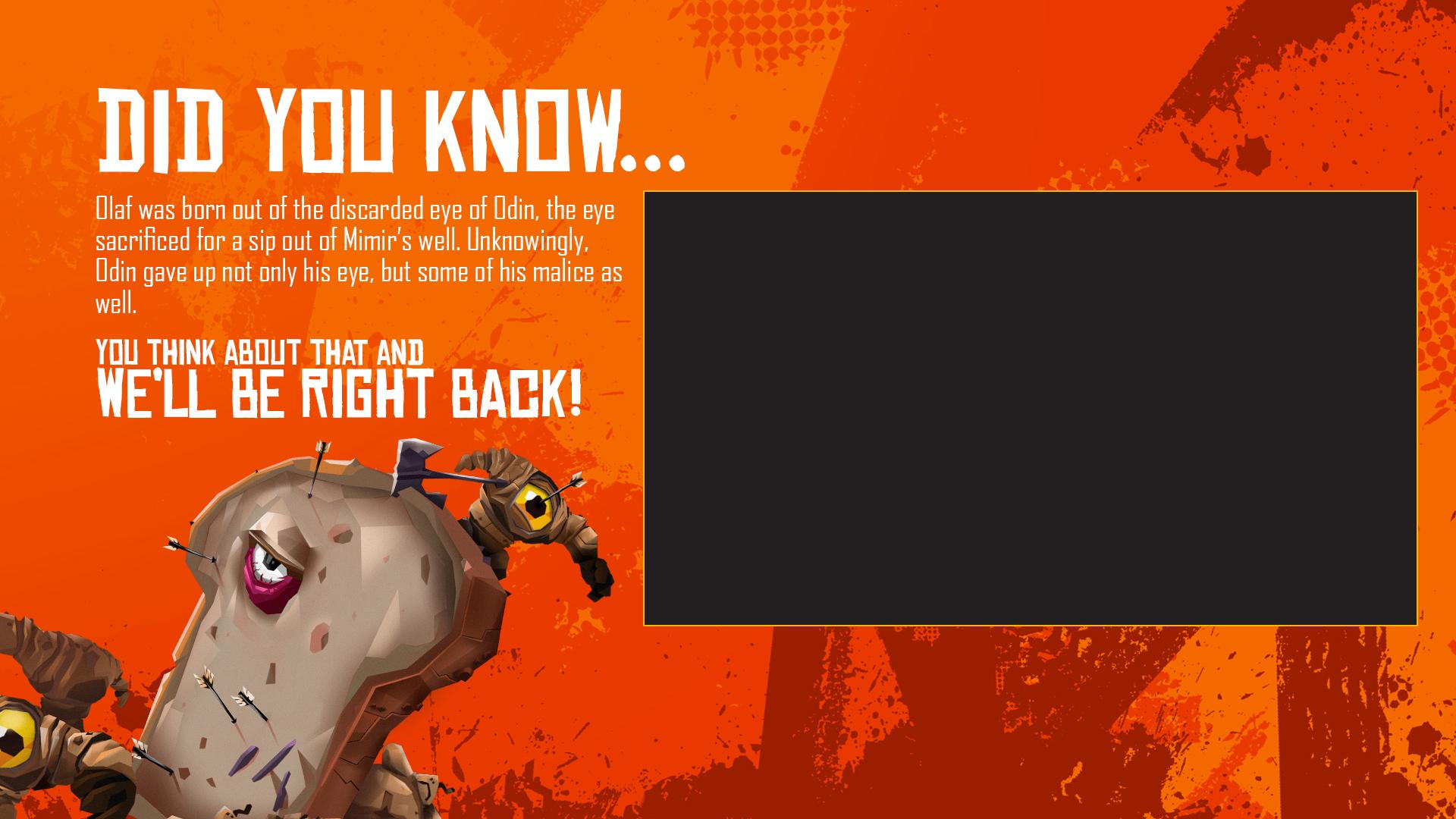 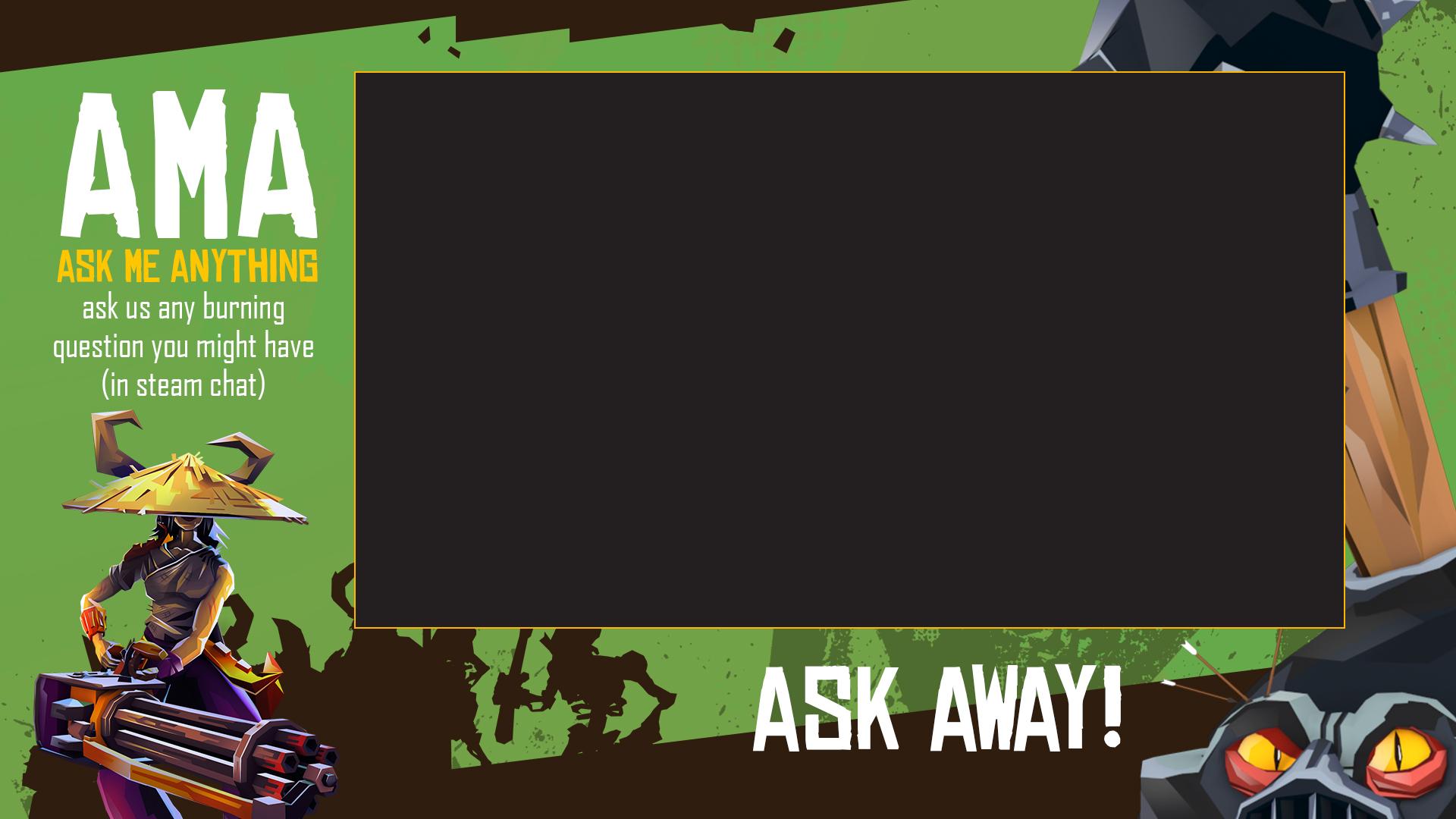 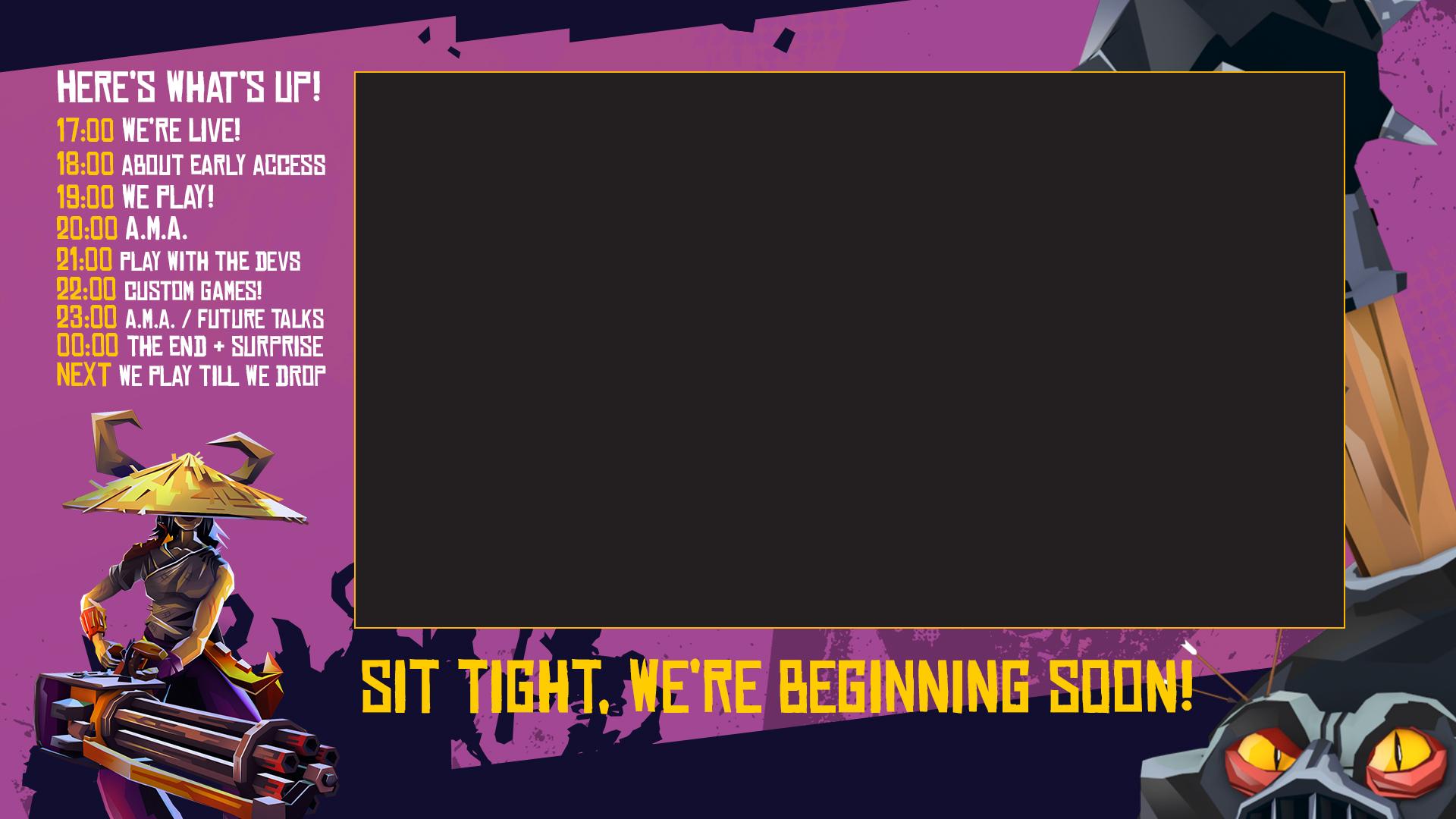 The second day we re-broadcasted the event, mentioning that it’s a pre-recorded material. We kept the chat live though, so we got a good chance of talking to more people who wanted to know about the game.

Our stream had a maximum of 230 simultaneous viewers. At the same time the best broadcast on Steam had 3500 viewers, so we were quite far from it.

Still, we got featured in a couple of places:

We love streaming. It is a great way to interact with your community. We made our own streaming corner in the studio and started pondering on what other crazy stuff to do in order to reach our audience. Couple of ideas:

If you have ideas about other stuff that we can try out, please let us know.

If you find this helpful, please show some love and wishlist/try the game and do not forget to spread the word about Bossgard, the only game where you can fight gluten like a Viking! 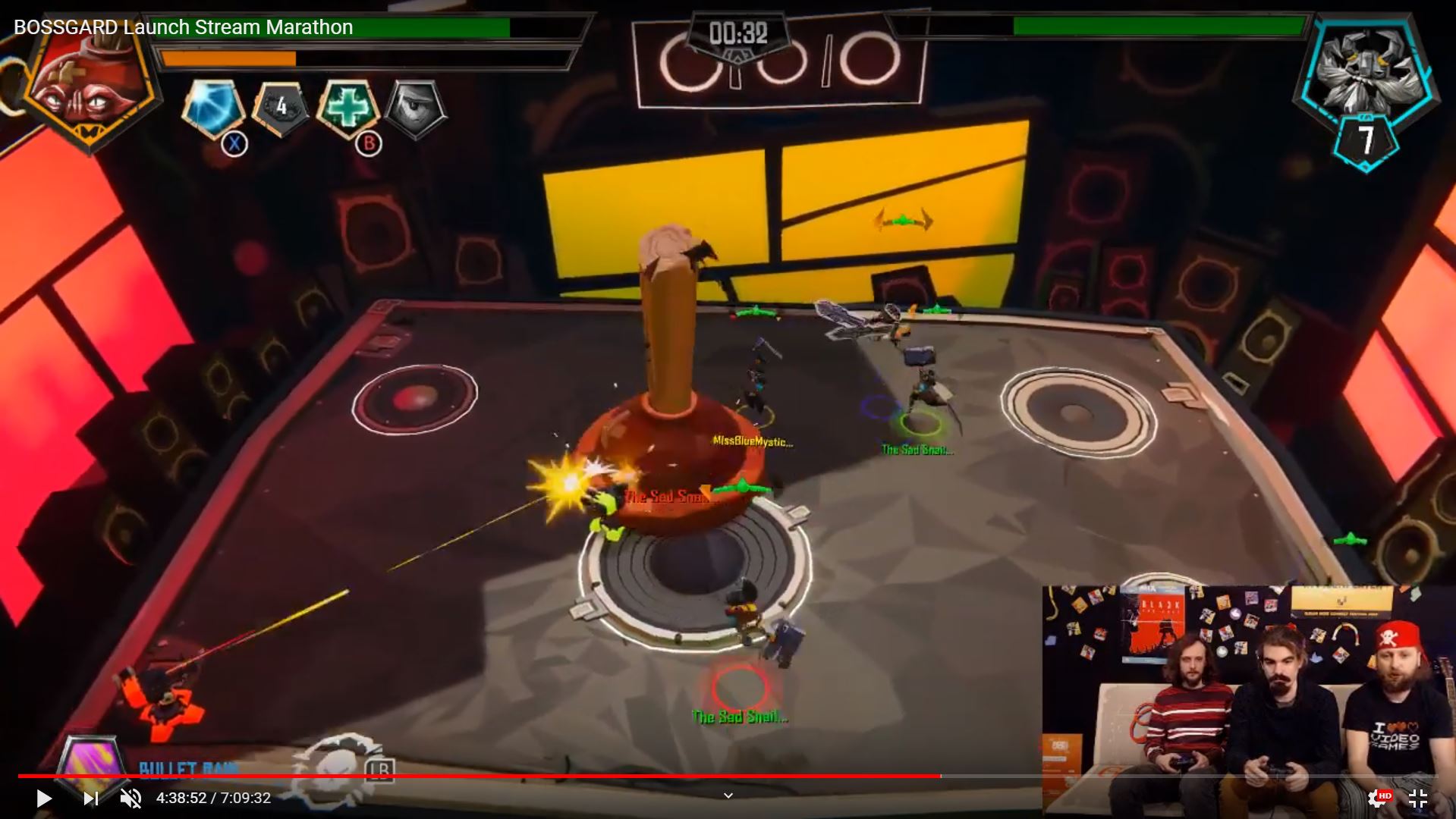 If we peaked your interest and have any burning questions, we're doing a live stream on Friday 26th, from 19:30 UTC + 3 on Steam and Twitch

Congratulations for your game. Thank you for the guide. This will definitely help indie devs like us. We are also hoping to launch our game demo on steam very soon.