The current project is realized with Unity3d and 2D is replaced by 3D.

Presently, “Bombzone refueled” can be played with up to 10 players in the local multiplayer modus. There are 2 different themes (classic and tutorial) each with varying types of block-arrangements. The amount of special equipments represents 26 now; because of good ideas the extras will be extended significantly.

The game hasn´t been finished yet, especially, the figures have to be built in a new way and the fine adjustment of the single levels have to be improved, but apart from that the game is already playable.

Try it … and write me if you can give suggestions or find mistakes!

If you are in the mood of creating a figure you can write me, too.

It's done, the next release of Bombzone refueled is published...

Right at the beginning many thanks to my eager Betatester Scarlet, Schwen, Schröder Ecki and Lars. Even after such a long time of playing they are still searching and trying to find tirelessly my hidden Bugs. There would be more undetected mistakes in the game without the help of theses examinants ;)

Let´s switch to the new version now.
It is about the 5th alpha version of “Bomzone refueled”. For some reason a long time has past from the 4th to the 5th version, but it will continue, that´s the main thing ;)

The following features are added or changed: 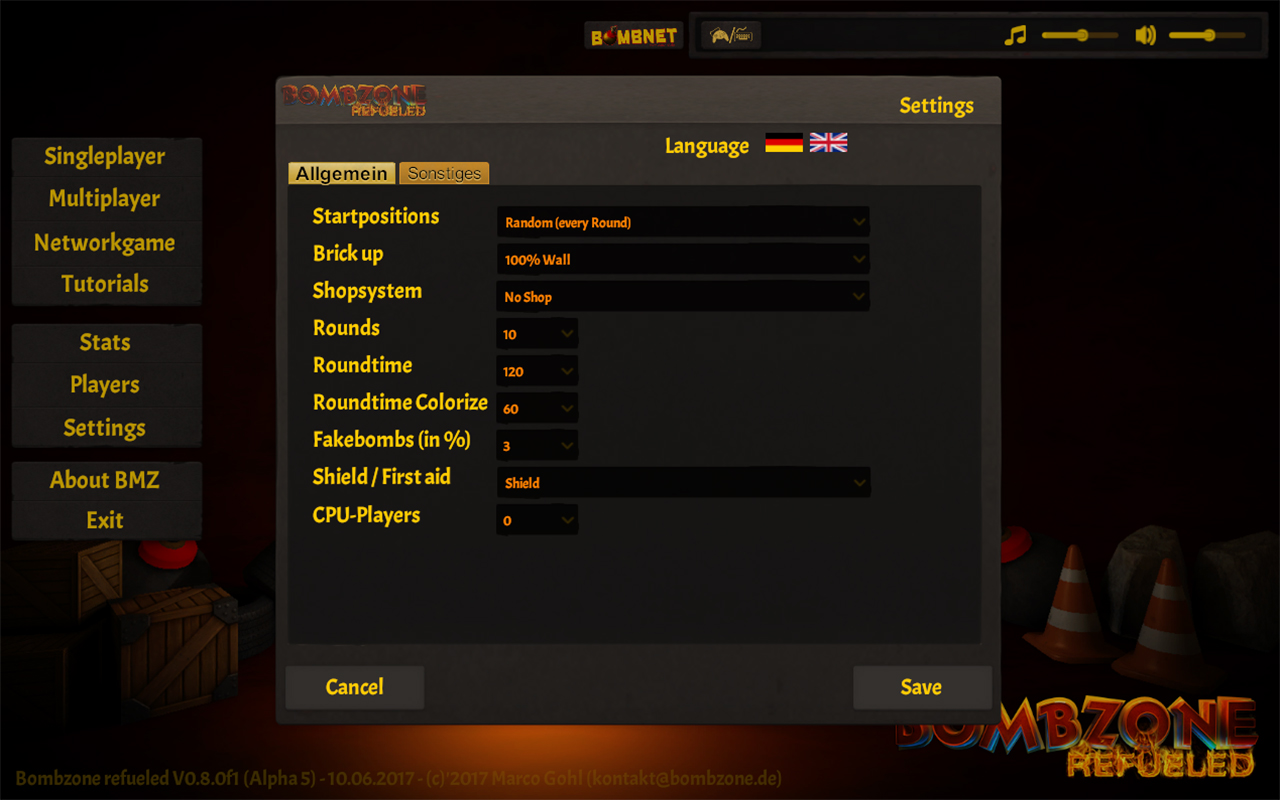 Menu:
The menu had to be reworked and adapted – another time (thanks to the change from Unity4 to Unity5).
Multilingualism is a consequence of the modification (German and English)
Other languages will be setted gradually.

The menu of the game settings were adjusted in a large-scale manner to make the game more manageable and logical.
Here you can turn on antialiasing and different funny retro-visual appearance. Everybody who wants to turn back to ancient-classic Amiga graphics can play with 640x480 :)

Graphics:
The game graphic/design was reworked slightly, the “Extras” are renewed completely, and so are some graphical effects like explosions and Beamer (new update). 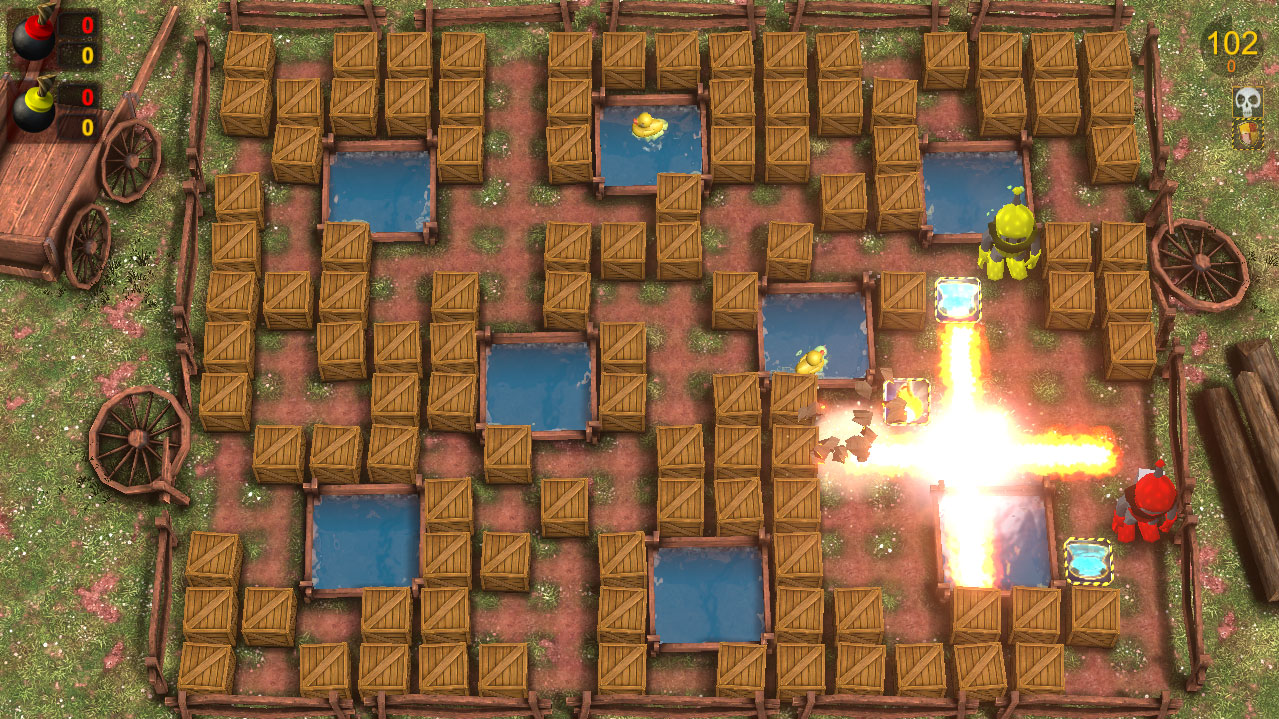 Statistics and administration of the game:
Now it is possible to create own players and playerlists, though this feature is currently only provided after generating an online-account. This account is for free and your data are safe.
You would think: Oh no, another compelled online-account - but there will be an offline database in the future. At the moment, on the present stage of development, it is much easier for me to care for the database in an online way.

Actually, you are not forced to create an online-account. The game works anyway, except for playernames and stats.
You only need an online-account for game statistics and for using your player at your friends.

Controlling:
The steerage of the game is completely new created. There had been significant problems with Xbox controls and with more than six players at one computer.
Besides, slipping around corners works more fluently because of the upgraded controlling.

BORDEREXTRA – If the player leaves the field sideways, he will get on again at the opposite side.
BEAMER – If a player sets a target somewhere on the field, he can beam there from everywhere at any time.
STONEBOMB – The stone-bomb can be kicked through Boxes in combination with the “Kicker”.
STOPPER – The wicked/nasty/bad “Stopper” is dedicated again. If a player collects this Extra, all the other players will remain motionless for a short time.

Features of the playing-field:
Arrow-field – Arrows which are visible on the ground change the direction of the rolling bomb. Pay attention, there are arrows that turn around ;)

Seesaw – A classical seesaw: Put a bomb on one side, jump on the other side and the bomb will fly highly onto a new playing-field (try it with other players, too).

Robot - At SciFy Theme a small Robot is moving across the grid and fire flashes and bombs from time to time :)

Themes:
A new Theme “Scify” has found its way into the game. 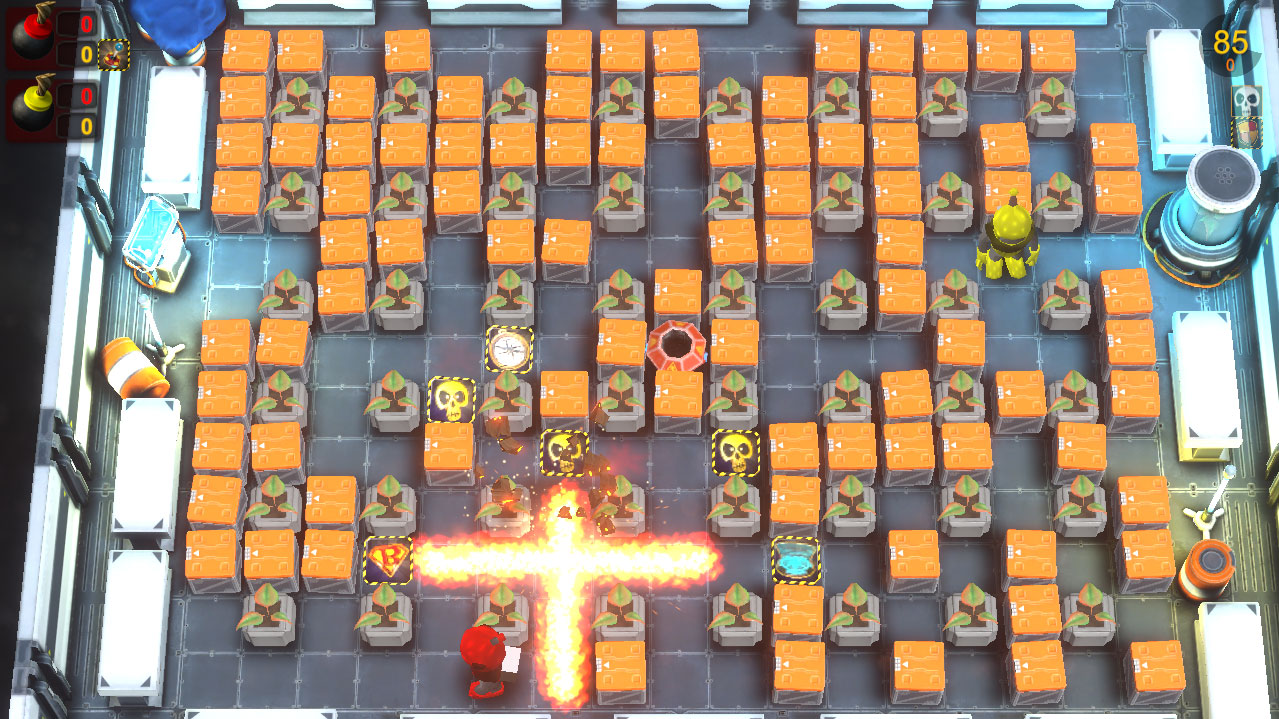 Have fun and write me if you have ideas for improving the game or if you have found any “Bugs”.

Hello, I've released a new Bombzone refueled version. Bugfixes and a new Feature (extras can not destroyed by flames) are added. And the Linux version...

Hello everyone, now you can play bombzone refueled on linux, too. Please test the linux version and let me know if everything runs so far.

This is the third release of Bombzone refueled. Unfortunately, it has lasted considerably longer than it was planned, but now its done. A basic scaffolding...

It's done, the next release of Bombzone refueled is published... It is about the 5th alpha version of “Bomzone refueled”. For some reason a long time...

Bugfixed Alpha2 Version You can find the Linux-Version on my homepage www.bombzone.de

thank you very much for this great fun awsome game :D

thank you very much for you effort to make this game awsome and cool :)
keep up your good work

Wow, hopefully this turns out well! Been missing Bomberman for years :(

By the way, no offense but your English is a little tricky to understand from times to times...

Glad to hear it