Blue13 is a casual arcarde like skill game for everyone! Challenging and fun for every age thanks to super simple controls and addictive game play. You are playing a green, blobby and tentacled alien that crashes on the marine planet "Blue13" when he was out for a mission. His ship scattered into thousandths of pieces and the only way to get home is to repair the ship. But it's not an easy job to collect all pieces all alone. That little green thingy will need your help!

Thanks for voting and helping Blue13 on it's quest to become the 2022 Indie of the Year. You are now in with a chance to score some free games. Help this game secure more votes by embedding the widget (or link) we have included below on your favorite sites.

Blue 13 is a beautiful planet! Fist shots from the lagoon levels

Ladies and Gentlemen listen up!


I have been pretty quiet for some time now - my apologies but i have been busy like hell and as the game grows i am running short on budget. This actually just means i needed to do a lot of freelance jobs and need to do more at the moment. I have done some models that will be available on Stores soon but that has to be presented somewhere else ;)

All that slows the development down and as i need to start planing my Christmas game for
this year - or at least a makeover of my last one - there is even less time ...

Well all in all i got done quit a lot though! And this means that i probably will release Blue 13 somewhat in November :)

But for today i like to present the first official screen shots of the lagoon world that will contain the first 20 levels of the game!!

As you can see it is an all different look from the Deep Sea Caves and that's what it's supposed to.
I wanted to get something chilling ... relaxing ... so the player can get comfortable with the controls and the feeling of the game - hope i managed to archive that somehow.
Just see yourself: 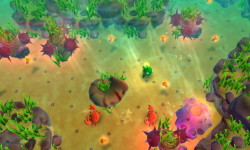 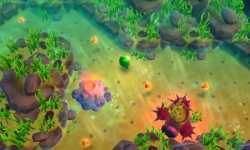 These Shots are not final of cause but they give a good impression i thing.
It was a lot of work to arrange and paint all the rocks in a way that every edge seamlessly fits every other one. I am quiet satisfied so far...

I wrote a shader for all that plant stuff so that it is moving in the current -> in a very smooth and organic way ;) Further i added light rays as this "world" is very close to the surface.

The enemies in this world will change - planed are some snails and puff fishes - those will be fun :D

Enough of the lagoon world! ... (needs a nice name too) ... lets talk about the improvements at the Deep Sea Caves!

I haven't done so much here but the thing i did hat a pretty big effect! I finally fond some time to do the sea anemones i wanted to give some ghostly and glowing live to that caves. I somehow hat that Mushroom forest from "Nausicaä of the valley of the wind" in mind... Like This ... And This

So it's the eyes time again: 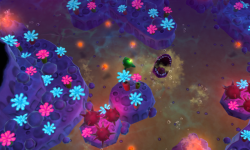 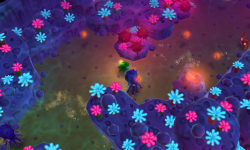 Well well - i think there is not much to say ... it's the same but better - at least i wanted to reach that. The sea anemones are moving within the current as well and everything looks living now in the game :)

With the next update i will present to you the last "World" and hopefully a demo on top but i need a new Android testing device because i broke my high end one and i want the game to run on most likely all kinds of devices as smooth and beautiful as possible ;)

Alrighty than - good bye for now i am less talking and more doing again.
Have a nice day and leave some feedback

Thank you so much - glad you like it! Stay tuned - there is more to come ;)