Bloodhound is a first-person sci-fi adventure game with puzzle and shooter elements, set to release initially for PC and later for Mac. As a deep-space researcher who wakes from cryostasis aboard the crashed starship Bloodhound, you must investigate your surroundings to find answers. Why did your ship crash? Where are your crewmates? Why does this planet seem so familiar? Explore a strange alien world, solve puzzles to advance further into the unknown, and battle fearsome creatures to survive.

After months of searching for a suitable ship model, the wait is finally over. Thanks again to the Unity Asset store - an invaluable resource for indie developers that allows a single designer with little art or coding skills to create a game of considerable magnitude - without which Bloodhound would be impossible. 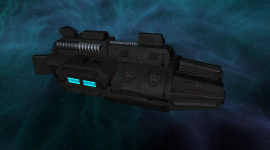 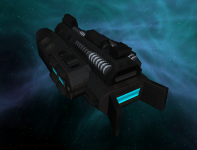 Feast your eyes upon the Bloodhound starship, in all of its majestic glory. Capable of traveling at near light-speed, powered by antimatter reactors. Where once there were several such ships, now there is but one. 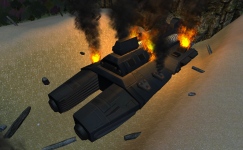 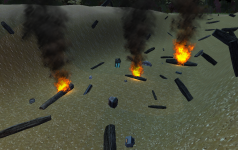 Look at that mess. Hopefully some of that wreckage can be salvaged.

New gameplay footage from aboard the Bloodhound ship.

New pics of the Bloodhound ship, upgraded to mark 3.

New screenshots from the alien planet that players must explore.

New images of the Bloodhound starship, upgraded to mark 2.

Bloodhound has been officially postponed indefinitely. Zerinity Productions has partnered on a larger game, about which more info will come.

No plans for co-op yet.

The game idea is god,and god graphics,tracking the game!

Thanks! It's always nice to hear encouraging words, especially from fellow gamers.

Honestly, I think you shouldn't provide a demo anytime soon.
As I am writing this, your game only has 4 watchers and little to no information provided.
I am only following this because a) you have posted actual content here (screenshots instead of concept arts or logos) and b) it reminds me a lot of System Shock 2 which is my favourite game.
Considering the screenshots you provided, there's still quite a lot of work to do.
Instead of rushing to provide a half-assed demo, I'd work on the game, post updates here from time to time in order to get people interested and release a demo that will make people talk about the game.
That's just my opinion though...
Whatever you do, do it right. ;)

Thanks for your honesty. You make good points. As this is my first potentially commercial game, I'm still unsure about marketing. There's more content than is shown here, but still, perhaps you are right. Thanks again for your help.

To put it simple: The most important investment is no book or computer program, but time.

The thing is that if you release an early demo, you can state that it's a WiP and nowhere near production quality as much as you like, people will think like this "poor demo -> poor game" and lose interest.

Thanks again for taking the time to help. Your good advice will be taken into consideration. There's much content I can release before the demo, which, as you suggested, can wait until I generate more interest.

Well, I'll just sit back, track and see where this goes...