The dogs are back! The good ankle biting ones, not the lies you seem to have gotten lately...

Recently we have been dabbling with our strange time vortex to look at what kind of games are being made in the future. If I may say, and I believe I speak for all of 1997 when I say this, what did you do to our dogs!? We love hating dogs! We love shooting at them as they jump at us in an attempt to rip our faces off, and then laughing when they fall over. But you people, you weird future people decided to make us “like like” dogs. Not in a ankle biting kind of way, but in a best friend buddy cop movie kind of way. Well no longer shall the people of whatever year you people are in misunderstand the true gameplay potential of dogs, so here are our dogs. We already made sure that they hate your face.

Dogs in Bloodcrusher II are the speediest organic enemies you will face. While they patrol on their own, or in packs, the second they spot you they will immediately run to you and, contrary to what you future people may think, attempt to latch onto your pelvis. Dogs can be distracted however, and a well placed grenade can dispatch one faster than you can say “Fetch”.

Some dogs, should they have been bitten by a radioactive copyright infringement, gain rabies. While their hopes of superpowers may seem initially dashed, they do gain a special elemental damage type for when they bite you. Note that you will not gain second hand superpowers from these bites, nor will you and the dog become crime fighting heroes. Rather, you will likely die of elemental damage before you gain any interesting powers. 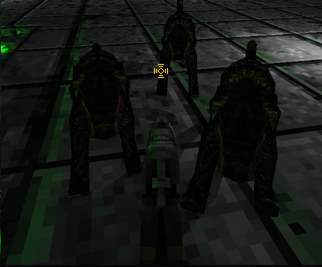 They do NOT just want a hug...

Other dogs are given more direct orders. By direct orders we of course mean an explosive payload. Try to avoid them before they catch up to you, or else you will be seeing all the colours that correspond to an explosion (you guys didn’t mess with those too right?).

Reminds me of the tremendously annoying dog's of S.T.A.L.K.E.R., do they come in packs of 20 as well?

You found the blind dogs annoying? I found the packs of 30+ well armed humans guarding every worthless hole in the ground more annoying. If the Zone's so hostile to human life, why are there so many damn humans you have to shoot to complete the game?