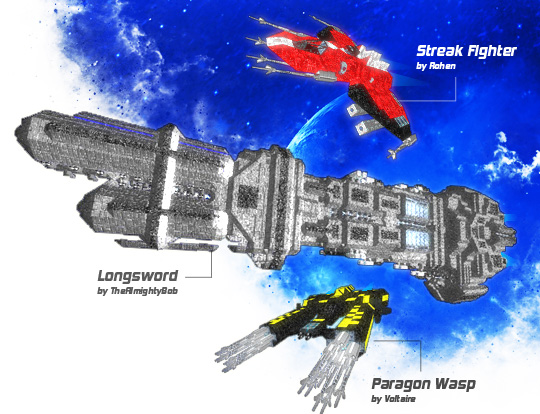 Thanks to the voxel system that allows for a massively destructible environment, and the low-memory Liquid Cubed liquid/solid/gas algorithm we've researched and developed (ModDB page), our intention is to provide a game where "everything matters".

Latest Public Build: Week 71c
Private Internal Build: Week 156
Blockade Runner is currently over going an overhauling to the engine, with the old 2012 editor version of the game still available to download for free. The editor allows you to build ships using tools such as symmetry, angles, and more!

For more information on what's coming with the engine overhaul, check the update section of the FAQ.

January represented the implementation of our new dynamic slope system, a new Founder's Club for our original supporters, and the release of the first build of the game since W71!

In Brief: Nathan's hard drive goes kaput, so we decide it's time we upgrade his dev PC (loads BR in a split second now!), Zack upgrades our version of SharpDX to latest dev committing, Gabe progresses through textfields despite a nasty cold, the "Founders Club" is added to the forums; accessible to those who purchased Blockade Runner before January 1st 2014. Zack and Nathan resolve an issue with entities disappearing due to 16-bit indexes on the GPU causing 3D surfaces to not draw, and Nathan gets his new slopes to render using our new moddable slope files.

In Brief: Nathan's next step on the slopes is straightening the tangents on the dynamic slopes, and otherwise continues fine tuning the process of making slopes. Gabe discontinued work towards IME keyboard support, and gets the visual portion of textfields for debugging. Michigan freezes over. Zack reduces loading time for BR significantly, fixed SharpDX having switched to right-hand coordinates borked our collisions, and among numerous physics and graphical issues also solves a problem where only single chunks would draw. Micah meanwhile experiments with "mothership" concepts.

In Brief: Over the weekend Gabe gets mouse selection for textfields done, remarks on how awesome it is to work with UI in BR now, and progresses with the Log-In screen. Nathan's on to the next stage of the dynamic slopes and makes sure slopes and their edges work with each direction and interior directions appropriately. Zack & Nathan resolve a myriad of rendering issues, including gradient shaders and backface culling z-fighting. VengantMjolnir becomes our first "Bounty Hunter" and solves an issue with our specular!

In Brief: Zack sets BR up with SmartAssembly, Gabe and Zack clear the old W71 UI code out entirely of MP since it'll need to be replaced, Gabriel condenses the unneeded UI to only the necessaries, fixes issues with clipping not functioning properly with scrollbars, fixes fonts, and generally cleans up the UI. Zack cleans up character physics to cut its CPU usage in half, fixes issues with Lidgren (problems we'd had since last year!), and re-factored W28 thruster code in the new engine, tracks down huge lag spikes, among other bug fixes. Nathan continues debug issues the dynamic slopes, correcting each direction one-at-a-time. Micah experiments with "hangar" visualization concepts in 3dsmax.

In Brief: Nathan uses a debug corner model to help finalize debug issues with the slopes, Gabe and Aaron work on prettifying parts of the new Login screen, Zack continues debugging issues with the physics in multiplayer. We test the new SmartAssembly error reporter, makes spotting user-submitted bugs much easier since it highlights where in the code the error came from. By the very end of January, the first release in 78 weeks was made available to Founder members! The first release is simply a test of the 2D pipeline, but represents a huge development milestone on our end!

- All pipelines needs to be debugged for several months before 'gameplay'

In the previous month...
In December we'd finished off the voxel mesh / texture atlas upgrade and decided it'd be for the best if we lumped the dynamic slopes into the schedule before releasing to the Founders. This unfortunately meant that if we were to reach our deadline of "before the end of January 2014", it'd have to launch rough and without the time for polish (/things to do)!

Dynamic slopes
The dynamic slope system took Nathan most of the month to debug and correct for all graphical issues, but by the end of January it was ready to go and is now a powerful piece of BR's feature arsenal. To put it simply, the dynamic slopes allows us (and the community) to very easily add new types of slopes to the game. Need a chamfer edge? No problem. Need a reverse-double-twist pyramid? It can be done! There was a lot of work to make sure it'd operate 100% of the time and properly remove unnecessary polygons (a staple of voxel games), and are very happy with the results.

Founders Club
After being recommended by some folks on the forums, we've introduced the "Founder's Club" where we can keep the original community together, give back to those who supported us since the beginning, and not lose sight of those who helped us get where we are. Anyone who'd purchased BR before January 1st 2014 is eligible, and you can access the Founder's Board on the forums: Forums.blockaderunnergame.com

The first build is released to Founders!
Squeezing its way in (and barely making our target estimate from November), we make our first release since W71 to the Founders in the Founders Club! The new engine is still in a bubbling primitive state however, so our first build is just a (successful!) test of application dependencies and the log-in screen to make sure everything's working on other machines.

Now that we're able to release raw private builds to the Founder members, next month is continued debugging by the Founders of the engine's pipelines; 2D, 3D, UI (command buttons, scroll bars, etc). The plan for the next few months is to hit each of the game's pipelines one at a time until everything is running A-OK.

Stand by for February in Review!

Finishing the voxel mesh/texture atlas system, beginning the new dynamic slopes system, and loads and loads of work in preparation in release during the...

November was another big month for Blockade Runner! Along with development timeline infographics to help put the development in perspective, November...

Besides the major announcement of our transition to SharpDX, the second half of October was a really busy month on the refactoring end of things! The...

In yesterday's Bi-Week in Review we'd mentioned we a bit of an information drop that was too long for a single post. Perhaps you may recall earlier this...

This week’s update includes a boost in performance, new asteroid generation with ore and craters, fixes for some multiplayer instabilities and more!

December and January in review are finally up... now onto February. =X

If you're referring to the styles for the character, atm we're favoring the final rendition of the head on the far right:

Sorry for my overly short comment. I'm referring to physics mostly. Games like this one would have its fun factor increased if it would be realistic. So far, looks good.

Realistic, to a degree. 100% realistic is questionable for its fun content. ;D

I built a cube with an engine and a gun...