As a part of bizarre space program our monkey hero is sent to space in a rocket ship to collect as much bananas as possible on his way to the sun. The premise of whole monkey civilization, their technology and society is based around belief that the whole sun is yellow because it's made of bananas. Only way to get there is by rocket and our monkey is following his "Yellow brick road". The game itself is sort of a presentation that main boss monkey is presenting to his minions; how to get to the sun and what to expect from space traveling from the monkey's point of view. Players will choose a specific mission by spinning the wheel of fortune before the game. Your goal is to navigate monkey spaceship to it's way to the sun. Rocket is powered by fire crackers, stars and planets are hanging from the ceiling and space is a giant theater. Both visual and sound style is influenced by the fifties, atom-punk rendered with UPA-e & Hanna Barbera cartoons and it's all part of the larger universe.

TripleClaim Game Collectives Bananaz in Space is now live on Indiegogo. You don't have to contribute with money, share, tweet it means so much!

We have amazing offer for $5 you get not just Bananaz In Space but every game TripleClaim publishes ever! 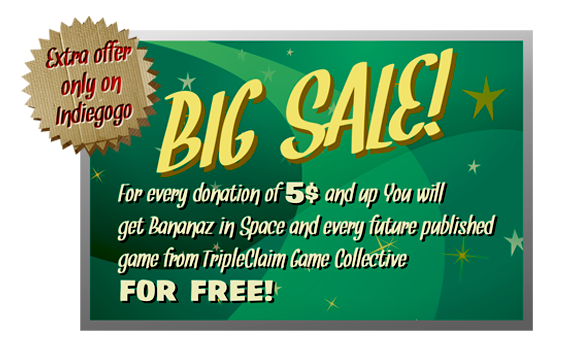 We have some amazing perks to offer Check us Out!

We have been nominated on indiescrashe3.com vote for us and send us to E3:)

Animating a prop that we modeled and rigged in previous videos.

This video shows how to create simple rig for prop modeled in previous video.

Twitter
Tags
Embed Buttons
Link to Bananaz in Space by selecting a button and using the embed code provided more...

(this is a) META game Arcade