Ash of Gods is а multi-genre project that features most of the typical elements of a visual novel, tactical turn-based role-playing game and card strategy. This is a story intending to show all the complexity and ambiguity of moral choice. Good people often become rascals while inhumans behave more human-like than humans. This is the story of “angels” who after being given free will turned the life of humans into hell in the absence of a god. This is a novel that shows you that no conflict has a right or a wrong side because even your enemies have mothers and children.

This article describes a new approach we took to implement the turn-based combat in an RPG with some twists to the traditional rules.

From the very beginning the combat system of Ash of Gods was a mix of classic TBS (turn-based strategy) and a card game. However, all of this started trivially: with a blank sheet of paper. I’m sure if you’re interested in playing a tactical game armed only with your pencil and a scratchpad while waiting for a plane, you’ll consider this to be a pretty good beginning. We were playing in our old office, even before we’d quit our previous jobs and started our own company. We gathered as a small group during lunch break to play, using tables drawn on a sheet of paper. We constantly changed the rules, trying to find the ideal variation. It was very entertaining. For instance, we left the opportunity for each player to shout in the middle of the battle: “I came up with a new rule! From now on, if I hit you this way, you’ll die immediately! It’s cool, isn’t it?”.

If such a rule didn’t piss anyone off or interfere with gameplay for a day, we kept it. When the number of rules exceeded 5-6, we discarded all the superfluous aspects. It’s hard and boring to hold too many rules in your head when you have to calculate everything mentally or on paper.

So, a few days later we threw away the dice and forgot about the random factor completely. Its place was taken by cards. The cards and characters on the field allow you to build a battle strategy on the basis of the card pack you have – while the characters define your tactics. To be honest, I can’t remember a single game with similar mechanics. Heroes of Might and Magic may seem similar in concept, but the feelings and emotions from this game are completely different. 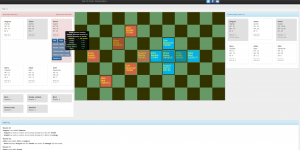 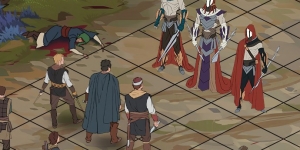 A little later, when I wrote the web prototype of the game, I endlessly asked Dmitry (our game designer): “Would you play it again and again, regardless of the storyline and the plot?”. At some point I was even afraid that he would punch me for the phrase “To experience vivid emotions”. Well, when you’re using a card in Ash of Gods, it’s a chance to intervene in the global battle rules and it can sometimes be very annoying. It may seem bizarre but the best sign that we’re on the right path was when we started swearing. Those shouts of your friends: “What a f…ng bastard you are!” – when you’re playing the card “Hypnotism” and, if you’re the lucky one, exchanging your semi-dead unit for the headliner of your enemy’s team… That was the best indicator of what we’re trying to do. To piss you off but not to the degree that would make you quit. For instance, sometimes you can win in the battle where you have only 2 units against 6 – given that your team was lucky with the cards while your opponent made minor mistakes. Or you may win in a situation when your opponent is completely sure that fortune is on his side. In such situations, all those offensive and obscene shouts are the drug that makes you want to continue.

The canons of strategy games

When I first showed our combat system to somebody I didn’t know, a user from some indie forum, he said to me very arrogantly:

“This combat system sucks, because you went against all the canons. In your game a player shouldn’t only use up energy to perform actions, but health as well. How is it possible to kill a unit for making a move?! You’re not allowed to break the canons! You’re crap!”

But I just love breaking canons. The battle turns out to be dynamic and sharp and you feel as if you’re in a slasher game when you’re dealing with the level boss. In that type of game you have to decide: should I hit harder or will this guy get me? In our game, in turn, you have to decide next: should I spend some of my health to hit my opponent with maximum force and kill him, or isn’t it worth it? Should I choose defensive tactics or throw my units forward and suppress the enemy? The abilities of your units push you towards impulsive decisions. For instance, the archer is able to kill almost any of your opponents’ characters with just one shot – but the price for this will be almost 90% of his health. One shot. From a distance of half the battle field. Isn’t it tempting? At the same time, we were very eager to constantly demonstrate the price of each mistake, when wrong steps made at the beginning end up leading to defeat. So, in story mode it will lead to a situation when your archer won’t feel at his best – and if your party has no strixes (the stones which are the global resource in the game and which provide the defense against disease which the Reapers are sending), the archer will die in story mode. And – I will always say it, even the main protagonist will die if you let him fall in battle without resources or time to heal. 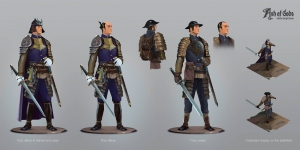 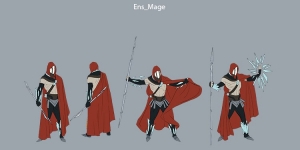 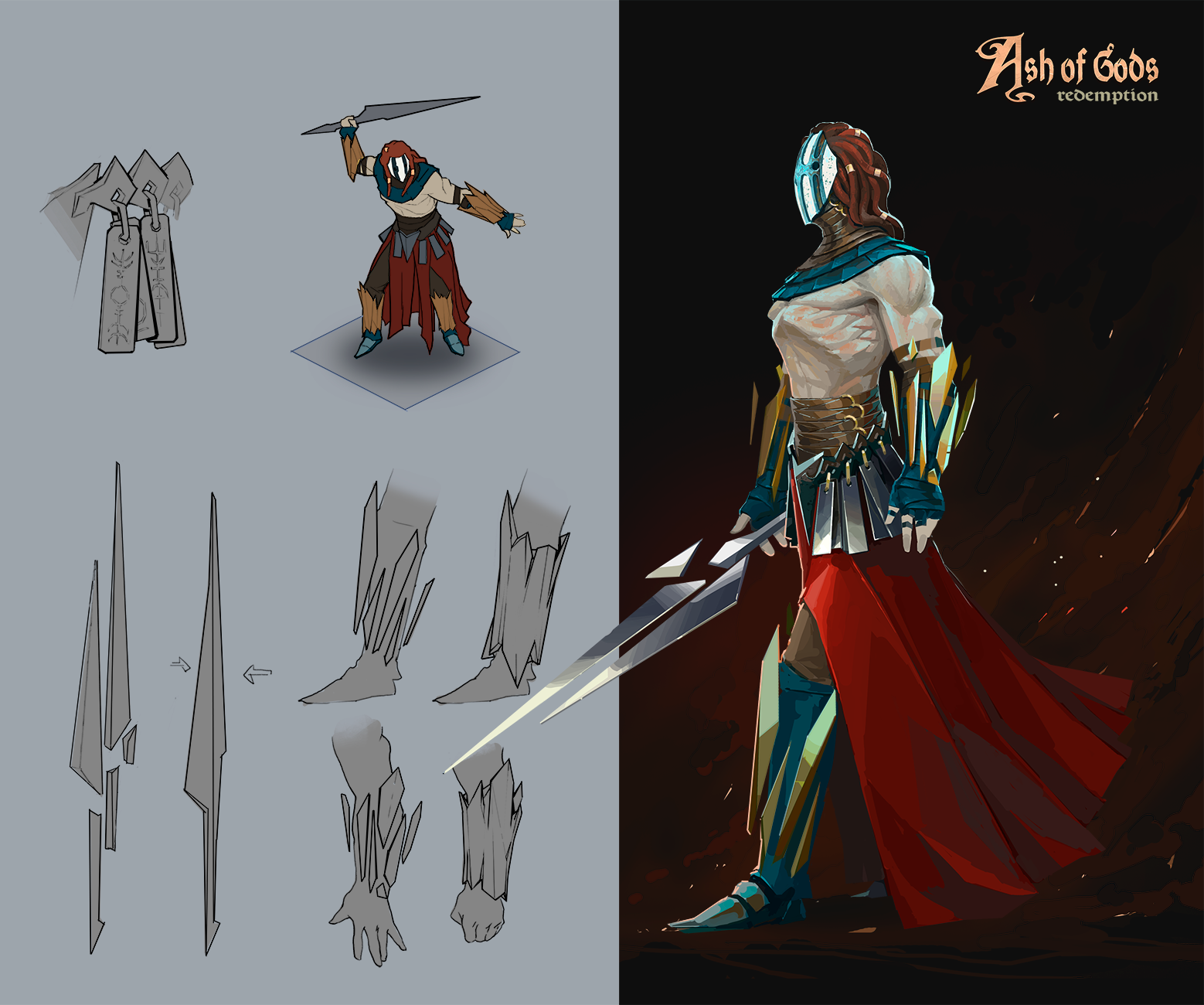 As for me, I suppose that we broke the canons three times. The first time was when we forced some classes to pay with their health for the most attractive abilities (I mean those situations when you spend 3 units of health to produce 6 units of damage and gain 1 unit of attack). Each character in our game has a set of three main parameters: health, energy and attack. All actions are derivative of attack, as is the price you pay for these abilities. If your attack rate is equal to 3 while the ability which you want to apply costs 2 points of attack, it means that you will expend 6 points of health or energy. Some abilities are free to use, some require you to spend health or energy. A part of the archetypes is built exactly on this principle. Now the second time we broke the canons was when we, in an attempt to move away from an extra “poker-like” approach, added the rule of “empty energy”. When a character’s energy falls to zero, any incoming strike against energy causes double damage. “What the heck?” – you may ask. Well, it is what it is. You can deprive the opponent’s character of all his energy and then finish him off with a couple of strikes. Or you can apply to the opponent the card that exchanges health and energy parameters – and the unit with zero energy will die immediately.

Since then more than 200 people from all over the world have played the prototype with me and my friends. Their advice is often like real diamonds – we tried to choose people who play TBS or state that it’s one of their favorite genres. These real-life players are the ones who helped us to get rid of rules which were obviously weak or too complex, as well to change and add some things in the mechanics. So, if we we knock on your door one day and ask for help – please find a couple minutes for us, check out the game and tell us what we can do better.

Next is the third canon that we broke. All the abilities of the classes are based on the fact that you can change the levels of health, energy or attack of your or your opponent’s units. In most cases you are the one who chooses whether a unit will strike at an enemy’s health or energy. So, the “Swordsman” can cause slight damage, receiving a little bonus for his attack each time he does it. If you overlook such a unit you’re doomed, because his attacks will become stronger than that of the other units. Then there is the “Templar”. He isn’t very strong but he can reduce enemies’ attack index. If you waste your time hanging around near him, your unit will turn into harmless sheep with zero attack.

A little later we transformed everything into the following criteria: “Dynamics“, “Mood“, “Originality‘ and “Challenge“. If you offer a rule without explanation what criterion it could improve – we’d throw it out.

The storyline of this game moves pretty fast and unpredictably and the dynamic combat system should maintain the tempo and mood which are set by the plot. Each of your moves should be important and have a value. We’re trying to balance character classes so as not to let the combat session last too long: just 25-30 turns for a team of 6 units. And we set the timer for each turn in such a way that you’ll remember what adrenaline is.

I don’t think that the edition available on Game.aurumdust.com (the public prototype) is the final one . At the time I’m writing these lines, we’ve been able to change the balancing and part of the combat system’s rules four times. So, the first editions were ideal for fans of poker: the defending side was able to choose the defending skill already after the enemy had chosen how exactly he would attack. The current edition is dynamic and very simple to understand – that’s what I’ve been telling you about all this time.

I want to end with a barebones list of important rules that we’re using now.