Meanwhile, the buzz around the castle is that Duncan once saved the world. This is news to Duncan. He can’t remember a thing that happened over the last few years. He definitely doesn’t remember saving the world. Unfortunately, he may have to – lest the world get thrown into turmoil yet again. Dark forces are rising, and the key to defeating them lies in Duncan’s memory – the memory that is now scattered throughout the world of Arvale.

Take him on an epic quest to retrieve those memories and thwart certain doom for the entire world, all the while battling monsters, exploring dungeons, challenging dragons, rescuing fair maidens, gathering friends and foes, and strangely enough, talking with wheelbarrows. 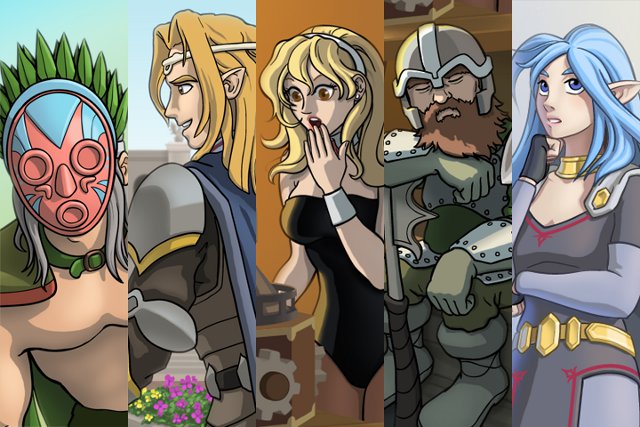 * Large, immersive, visual world with a huge variety of locations.
* Interact with hundreds of amusing characters in the story
* Laugh. A lot. Arvale is known for its fun, hilarious dialogue
* Overachieve with many side-quests
* 2 hours of original music
* Many playable characters give a unique storytelling experience.
* Over 20 hours of Adventure game time!
* Equip your character with ever-cooler weapons, including swords, spears, whips and more
* Wield magic spells against your enemies, ranging from fire, ice and lightning spells to the stranger and more intriguing Filibuster and Minecraft.
* Battle evil beasts of all kinds, from tiny rats and bats to werewolves, demons, and ogres.
* Interact with thousands of non-player characters to learn more about the world and give you some entertainment along your way – a lot of those NPCs are pretty dang funny.
* Laugh. A lot. Arvale has become known for its fun, hilarious dialogue, and this game is no exception.
* Watch original cutscenes that unveil your character’s story. Since Duncan doesn’t know any more about it than you do, you’ll both be amazed by what you learn – and by the cool visuals.
* Overachieve with the option of many side-quests to collect more items and battle more monsters

To promote Arvale and grow its popularity (top games), use the embed code provided on your homepage, blog, forums and elsewhere you desire. Or try our widget.

Ready for a huge adventure? Welcome to the magical world of Asguaard where the future is about to be torn apart. Somewhere, somehow, the Pandora Box has...

Epic Quest of the 4 Crystals

Presentation The most non-Japanese JRPG of the decade! Finally released on Steam by Aldorlea Games, "Epic Quest of the 4 Crystals" is an action-packed...

The sisters Scarllet and Beatrice have lived their entire life in their small village. One day, Beatrice discovered she had the gift to heal anyone with...

She thought she was doomed to an existence without meaning. But when a normal day at market opens the door to adventure, humble housemaid Kismet finds...

Deep enough for the veteran roleplayer... Humorous enough for the casual gamer! OH! RPG! is a quirky, innovative and colorful adventure by RosePortal...

The apparition of your loved one stands before you. The rain comes down so hard it stings, and the lightning flashes to illuminate the darkened windows...