Arcane Dungeons is a 2d RPG fantasy adventure game. You can explore large world full of enemies, dungeons, towns and much more. Fight enemies and get new equipment and level up.

Getting closer to Alpha 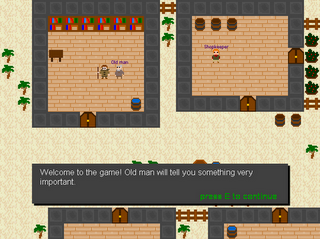 Hello! I haven't posted any updates for couple of weeks, but I am still working on this project. I've managed to finish lots of work, but the game isn't really playable yet. I am not sure if I will be able to finish first public test version of Arcane Dungeons till the end of July, but I will try as hard as I can. First new feature is dialogues. You will be able to talk to any NPC in-game (even characters which don't have anything to sell or are not related to quest). First town and little area around it are also almost complete. I've added introduction into the game and started the first quest. And last but not least is inventory. This is something I've been working for a long time, but I've finally managed to implement this feature into the game.

List of features I am planning to add before releasing first Alpha version of the game:

Guys I really appreciate your support and thanks to everyone who follows my project.

Some early progress on Arcane Dungeons!

Hello! I am here to tell you guys that development of Arcane Dungeons is going smoothly and everything works well at the moment. First Alpha release will...

Looks nice. I must get around to putting my roguelike up here sometime...

What language are you building this in? I found inventory are fiddly but not too hard, don't be put off.

This is a c++ based engine called Constrcut Classic.

Is it powerful enough for you? Looks great for making quick and dirty games over a weekend or something, but I've used stuff like that before and I found I ran up against limitations pretty fast. Like, could you program your own physics and such?

I think that you can also use Python scripting language as well as built in functions, but there is large amount of plugins and built-in behaviors, that you can create pretty complex games in short amount of time. I guess you better ask your questions on their forum, the community is great.

Yup me too and nice simple graphic ^^ I like it :D