Inspired by the game Space Hulk, it allows you to play as alien assault team taking on a derelict space ships infested with deadly aliens. Through many long years of training, equipped with specialized armor/weapons, each unit is tasked to take on the most dangerous alien species ever encountered.

"Join the human resistance force against the oncoming alien invasion." 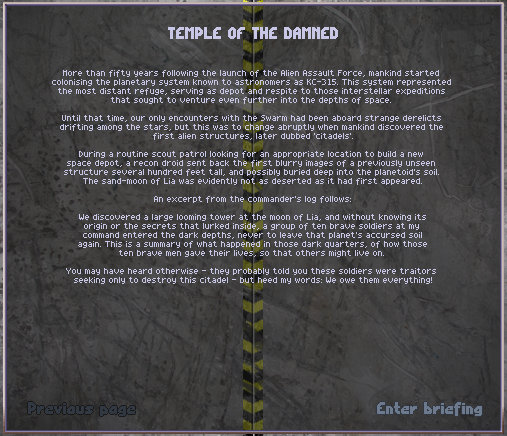 checkout some other mods:
Teardown.se

Alien Assault is a turn-based strategy game played in an overhead view. In it, players lead different squads of space marines in their fight against a relentlessly murderous alien race.

The battles almost always take place inside spacecraft or other enclosed spaces filled with corridors and small rooms. These conditions are ideal for the aliens, who – despite their use of guns – are particularly lethal in hand-to-hand fighting.

Luckily, the space marines have attributes that the aliens do not: discipline and sacrifice. The key to victory generally lies in the correct use of your units, including the willingness to sacrifice some of your men when necessary.

You find several different types of unit in Alien Assault, each with its own unique advantages and disadvantages. Marines armed with flamethrowers, for example, are ideal for clearing out alien-infested rooms from a distance. On the other hand, units with power hammers may slow the advance of an enemy force in a narrow hallway.

Alien Assault has five different campaigns with more than a dozen missions in each one. It also comes with tons of configuration options to leave the game exactly the way you want it.

Alien Assault is an outstanding turn-based strategy game. Cleverly inspired by the legendary board game Space Hulk, it creates an almost-perfect gaming experience that fans of the genre will love.

To promote Alien Assault and grow its popularity (top games), use the embed code provided on your homepage, blog, forums and elsewhere you desire. Or try our widget.

This version is as just about as complete as it will get (trust me it's comprehensive, including a tactics section). The only thing significant not in...

The latest version of Alien Assault is now available.

You start as an employee of the Unitech Corporation, serving as a commander of a private military taskforce to fight a race of mechanical beings mankind...

Dusk of D.A.W.N. is a strategic, browser-based collectible card game in a cyberpunk universe by Fjord Games. Gain power as CEO of your own company and...

From original BattleTech/MechWarrior creator Jordan Weisman and the developers of the award-winning Shadowrun Returns series comes the next-generation...

In a grim dystopian future, where mankind has scattered across the galaxy and the human society has split into two distinct classes, you are a poor stateless...