Aeon of Sands - The Trail

More on our Steam page!

Aeon of Sands – The Trail is a retro low fantasy RPG set in a post-apocalyptic world, with first person, grid-based exploration, puzzles, real-time combat, and a fully illustrated, non-linear, choose your story adventure.

The game follows the misadventures of a likeable slacker, who is suddenly thrown out of his cozy home into a terrible, infinite desert that seems to hate him.

Accompany the vain, nap-loving clerk Setrani through his first major adventure.
Guide him on his travels through a dangerous land, ravaged by the weather and by tribal conflicts. Struggle with him as the desert, wickedly, sets trap after trap on his path.

The story is driven by multiple-choice dialogues, in which you are repeatedly confronted with new absurd situations.
Based on your decisions, new areas can be explored while others become inaccessible, you meet new companions or make enemies of them.

It's basically Choose Your Own Adventure featuring Dungeon Crawling! 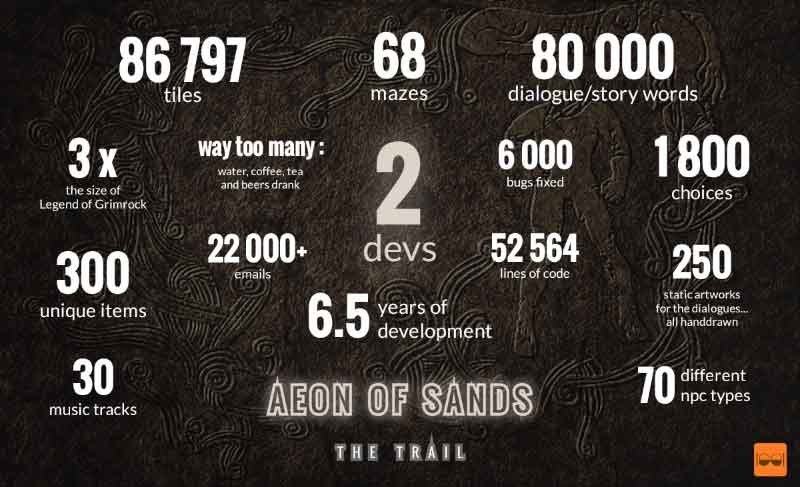 How often does an exchange on a game’s forum evolve, not only in a sincere friendship, but also in a fully developed, commercialized game?
Not often, I bet.
Yet, that’s the real lore behind the game Aeon of Sands, the first released game from Two Bits Kid.

The recipe is simple, but it takes a rare chemistry and two matching ingredients:
Florian, a software developer living in Germany, and Marco, an illustrator and artist from Italy, meeting each other on the Legend of Grimrock’s website.
One was working on a 2.5d engine, the other on a user interface and character portraits, and both shared the same passion: retro, first-person perspective crawlers, think Eye of the Beholder and Perihelion.
A recipe made in a dungeon crawler’s heaven, I told you!

Now all good things take time : it took our two-men’s crew 6.5 years of their life to make Aeon of Sands, a game that’s not only a love letter to the crawlers of yore, but a unique potluck of many inspirations, from The Hitchhiker’s Guide to the Galaxy to the post-apocalypse genre, with some Lawrence of Arabia’s zest thrown in.

Release announcement for Aeon of Sands - The Trail, releasing on Steam December, 4 2018

What is it like to play Aeon of Sands?

A snippet of what are like the themes and the choices the player will face in Aeon of Sands.

The sounds and music of Aeon of Sands – The Trail

A short overview of the creation of an opponent's visual in Aeon of Sands, with video.

Indie
Twitter
Tags
Embed Buttons
Link to Aeon of Sands - The Trail by selecting a button and using the embed code provided more...