A mysterious letter from the beloved. A cursed box of abominations. A golden key to a locked door. . . These are the three secrets which await in each dark, dreadful nether of your mind as you pursue the answers to your troubled past. Why have you fallen into the labyrinthine tortures of your own soul? Who has written these letters? How can you escape? And what can you do to avoid the ever vigilant eye of the Watcher? ADDICT is a retro game from one-man studio Jenito Games which invites you to find the answers to these troubling questions as you play through nine exciting - and terrifying - levels in this unique platformer. Featuring old-school artwork, cutting edge sound and music, and enough imagery and symbolism to keep you munching for hours, ADDICT is a truly unique gaming experience that follows in the pattern of artistic indie games which not only entertain, but also challenge and provoke. So prepare to take mouse and keyboard in hand. . . the Watcher awaits!

It's not quite on time, but it's close enough! The first ADDICT update is now available through Desura! 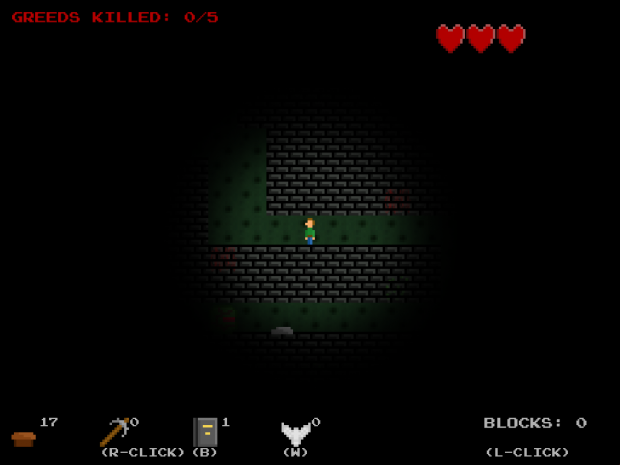 As promised, I've added two new levels. I was playing around with some more, but decided that this was all I could get done at the moment. The new "Vice Challenges" put our hero - now named "Ted" - in conflict with dark evils residing in his mind. They introduce puzzle/shooter elements which really mix the gameplay up a little bit.

Oh, by the way, THEY AREN'T EASY. Just making sure you understand that!

The release went well last weekend, so I've decided to bring new content to the game. . . hopefully by March 8th! Prepare yourself for new "Vice Challenges...

ADDICT was just released, and there has been a lot of positive feedback from around the web. What new content will the first update bring to the game?

Release is a pivotal day for any game. . . and it's finally here for ADDICT! Get it now on Desura!

YouTube "Let's Play" producer Sinuyan is showing off ADDICT in a special pre-release video series! The good news? He likes it!

Having trouble playing ADDICT? In game instructions being too vague? Then download this short instructions sheet to be your guide!

Where did you get the song from? I've heard it in another game that is currently in Beta.

Some sounds came from Freesound.org, which I would then supplement with whatever I needed.

FINALLY some more pixel bunch horror like Lone Survivor or Home <3
Will get it soon.

Holyshit. I don't think I've ever been this scared by a few pixels before...

I take that as the highest form of compliment ;) Thanks for the feedback and. . . glad it did it's job! ;D

Wow, this looks even too scary for me! Nice job man! I should consider buying this. By the way I am thinking of animating my Desura avatar :P

Woah! Just watched the trailer, and while the graphics are very simple, the sound is intense. Ever hair on my body stood up when The Watcher gave chase (headphones were on). Has a real nightmarish vibe, particularly The Watcher and his nasty scream.

Thank you! I thought combining the very simple, retro graphics with modern sound would give the game an edgy, unsettling vibe. . . glad it seems to be pulling it off! ;) I hope you can enjoy the game!

Creepy. Seriously creepy. The music and mood are parfait. When the Watcher finally appeared, I almost felt a loosening of my bowels that I would not have expected from a retro game. Can't wait to tie in with this one. Well done!

Many thanks! I hope the game lives up to expectations ;)