You finally managed to get on a nauti-crawl unit, everyone in the underworld can only dream of it! Few can get a glimpse of its brass and leather finishes before it leaves the hot foundries where it gets assembled with the sweat of the workers class.

No matter how you managed to sneak in though, now it's your chance of escaping through the forbidden surface, a land long abandoned by your kind.
A land you can only explore through this mysterious machine, for even a second outside of it would find you mashed by the heavy atmosphere surrounding the planet.
Too bad you were not chosen though, and without proper training you are more likely to die in that cockpit than you were in the rotten gutters of the underworld...

A Jules Verne meets Frank Herbert story set in a dystopian reality.
A unique dungeon crawling experience where the player is challenged to imagine a ruined world and learn how to control a mysterious machine in order to attempt a desperate escape.

Thanks for voting and helping 20'000 Atmospheres on it's quest to become the 2022 Indie of the Year. You are now in with a chance to score some free games. Help this game secure more votes by embedding the widget (or link) we have included below on your favorite sites.

Dungeon of the Endless

I guess the classic dungeon-crawler/roguelike genre main mechanics can be distilled into four main elements: a log to describe what's going on, turn based actions taking place one after another, procedural exploration and permadeath (you might have seen the last two in a few hundred thousand games lately).
When I had the idea of 20kAtm, almost every aspect of the roguelike/crawling experience somehow fitted with the concept of a cockpit-sim exploring a ruined world.

The game log is probably one of the most iconic elements of this type of games, it gives clues to the player on what's going on, and especially back in the 80s it was a great way to describe with words what computers of the time could not possibly show with graphics, I love this concept! It can give so much depth to a simple screen with an @ symbol and some funky characters forming walls, pits, and monsters.
In 20kAtm that constrain is pretty much there the same way but for different reasons, you are stuck in a cockpit and can't see outside.
So the log thing came easy, there's the main system monitor, it keeps track of everything that happens to your machine while giving brief descriptions and glimpses of a world you cannot see, perfect! 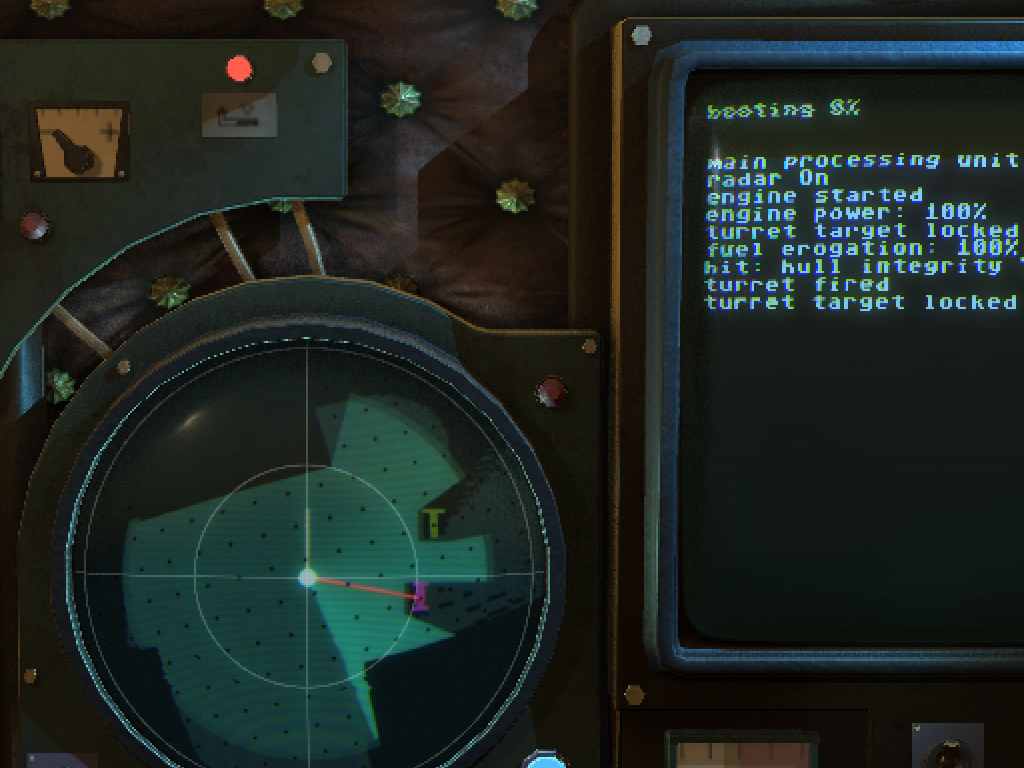 Action takes place inside the radar, and what could possibly force stylised graphics better than that? Everything has to be reduced to the essentials for the radar to be readable, and only key elements are allowed to be shown: no explosions, lasers, flares, smoke or big monsters. It's a radar, you see what's needed and nothing else, the rest is just sounds outside the cockpit. Creepy!

But what about the other main aspects of this genre?
I soon got to find out they don't all fit as easily out of the box.

My game is simulated, as in, real time action, something around this aspect didn't fit the bill as nicely as the rest of the game.
Think about it, you move a machine around while looking at the radar, you expect the movement to be either very stylised in a grid, or very fluid and continuous, almost like driving a car game from the top view.
I really wanted to keep my world simulated and avoid breaking the realism and flow with a grid motion system, it just doesn't make sense if you are inside a semi-realistic cockpit moving levers around in real time and experiencing the outcome of your choices as you make them.

This is kind of spoilery if you want to play the game and leave to your intuition the task of learning the machine, but I'll have to give a way a few details in order to explain how I got myself out of the turns situation, sorry (it's still gonna be fun to play after reading this, don't worry).

See the two levers there? 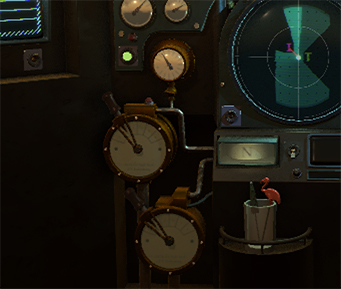 They deal with the engine, one controls how much fuel flows into the burner, while the other controls how fast the requested amount of fuel is pumped through. The burner that actuates the motors is activated only once the requested amount of fuel is available.
See what's happening here? Each time you move, fuel is burned and the machine pushed forward, how far it goes is determined by the amount of fuel you want to burn, but how long it takes to refill that amount is determined by the lever controlling the pump!
If you add this up to a sleepy abandoned world, that doesn't need constant surveillance and it only "wakes" when something moves, then you have...
...TURNS!

Just how long each turn will take is decided by your choice of setup. Want to go far? open up the fuel throttle. Want to wait less before the next move? crank up the fuel pump.
The outcome? You accumulate heat faster the less you wait before each move! And the engine takes damage from prolonged heat, ouch.
Turns out turns really have a use in this game.

Not to worry, you can always pick up and install a better cooler system if you survive long enough to find one.

Procedural design and permadeath are other two key elements, but I'd like to leave those for another post.
I like how each game designer has to deal with those aspects in terms of storyline: why the heck would you be getting back after dying, to find yourself in a similar setting but different each time, with your progress lost, or partially lost. Just why is that!?
I had to justify that too in some way while not breaking the immersion, but as I said, material for an in-depth post next time!

Ahoy sailors of the forbidden surface! When I first started thinking about 20kAtm, I could see in my mind so vividly the cockpit of what I now call the...