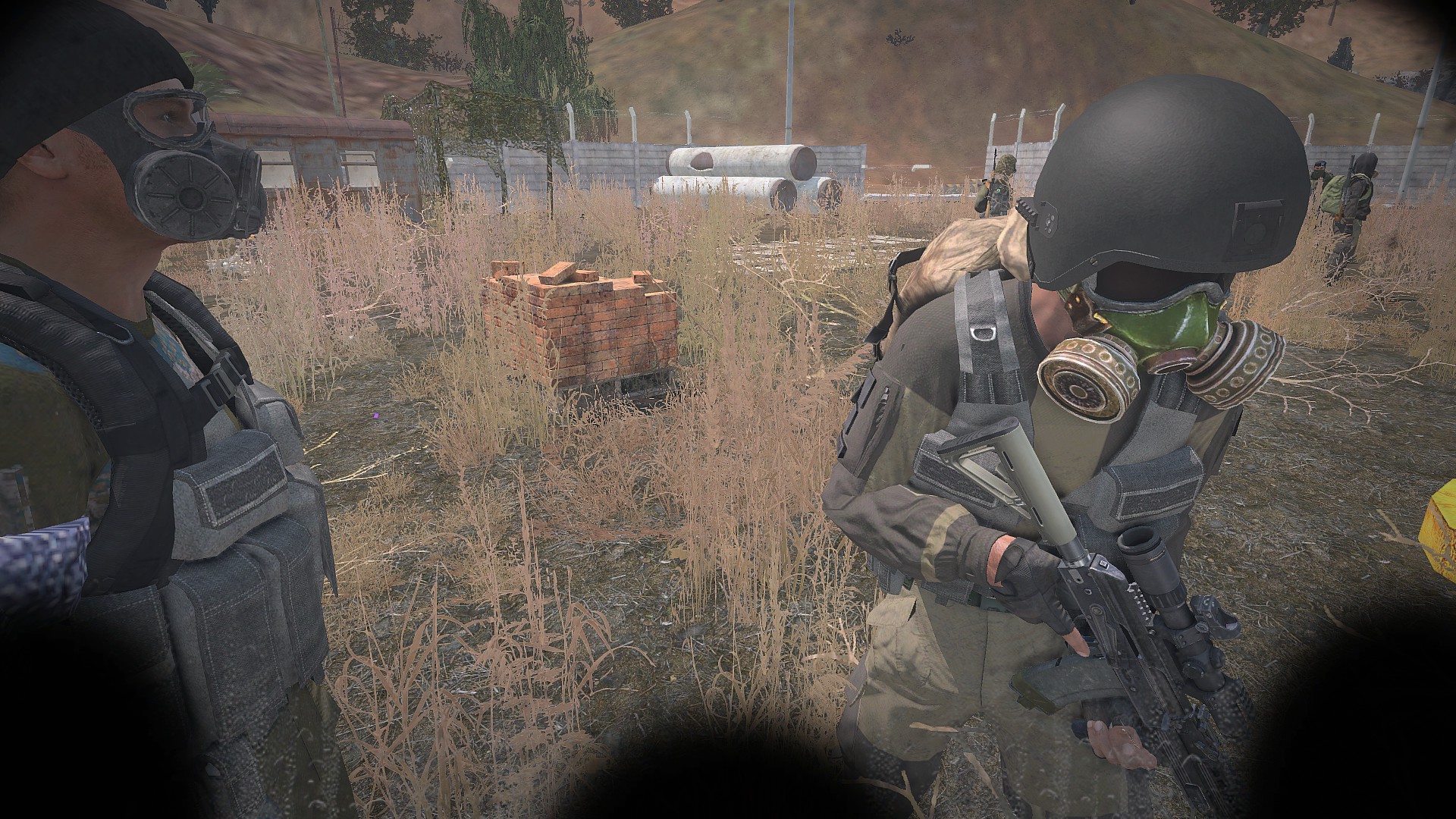 After the attack on the bunker from what my character learned were Bloodsuckers, we needed to resupply and tend to the wounded. Fortunately, the science team revived our only casualty, distributing bandages and ammunition... (called "Маслина" by players, Russian for "Olives")

One of my new friends, the man with the Green Helmet, was very happy about the Olives we were given. 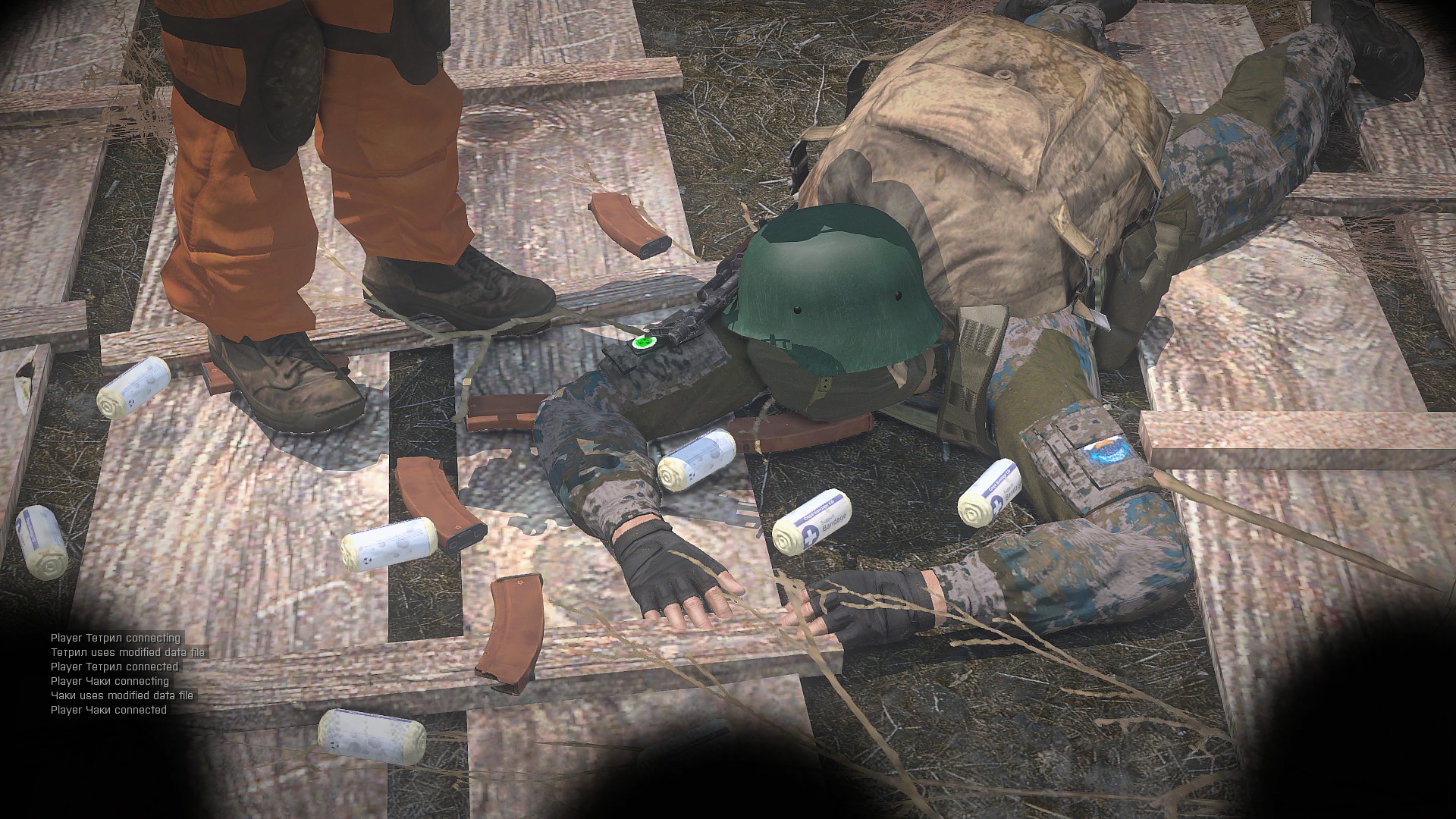 We rallied up near the broke down sections of walls that once were the front gate, and it became clear to me that this community absolutely took their tactical realism seriously at the faction level. The leader of our 10-12 man Element, the man who was leading the meeting when the attack broke out, started issuing orders. I could tell by other's silence what was happening, and we all waited in our two teams for the scientist to join us again.

Finally he did, and also his number two, the UN Military Lieutenant who I met on my arrival to the Bunker - as an escort. Both of these players spoke enough English to work with me, so our group leader wisely set Team 2 as the VIP package, Center of the formation was me, to my front was the Scientist who I was directed to follow precisely, His UN partner on point for us. Behind me were Язык (Yazik) and Alkash - which I must say - made me feel pretty safe.

Our mission was somewhat nebulous, but it became known to me that the scientists had seen my roleplay, and raised me one thousand. ...They planned to RP kill me, by sending me out of the Zone, back to America.... which I took as a lie. Why would the Government set a perimeter, and try to keep people out, while at the same time rounding up criminals inside and send them packing with a map and a apple? .... no.... I would never leave that bunker. I was not feeling very good about the scientist sent with me... he was the guy I was traveling with, and his UN counterpart... Not the Blue Guys... Clear Sky were continuing to the North, then East to destroy a nest of bloodsuckers near the East bar. We were tagging along, for some unknown goal... maybe just to show me around before they decided to kill me or not... 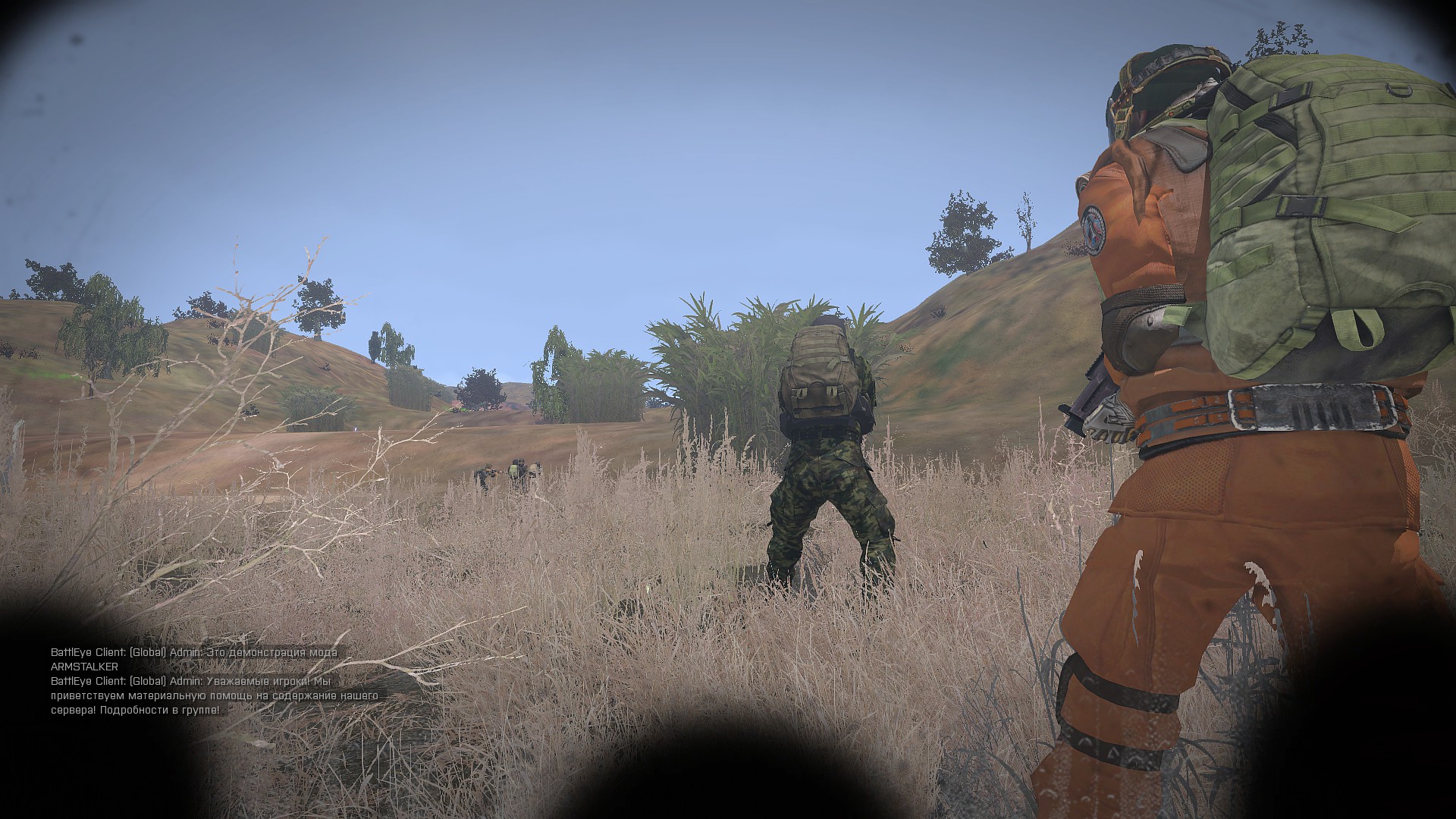 Much like the expedition with Duty, we stopped near the Bunker, all of us with rifles drawn, gasmasks on, loadouts checked. We waited for a few minutes - then set out. 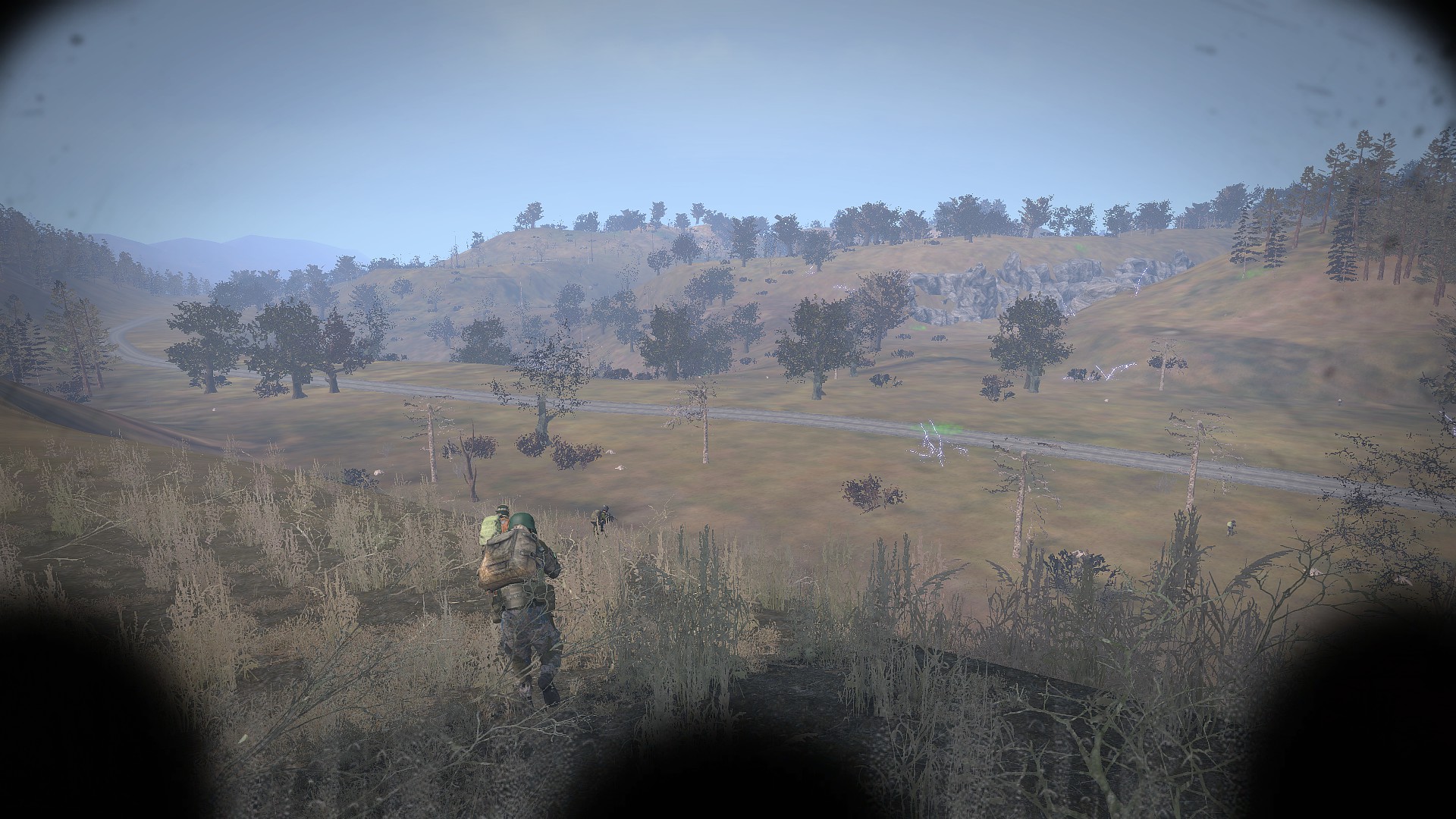 I watched the feet of the man in the orange jump suit, as he clambered up the slopes, around the trees, and cutting slices again in the footsteps of the UN Lieutenant .... We traveled for 10 minutes, until we came to a road. The team seemed to know where they were going, and we continued through the oak-like trees, silently, with interrogative Russian babble being traded at relaxed intervals in my radio headset. 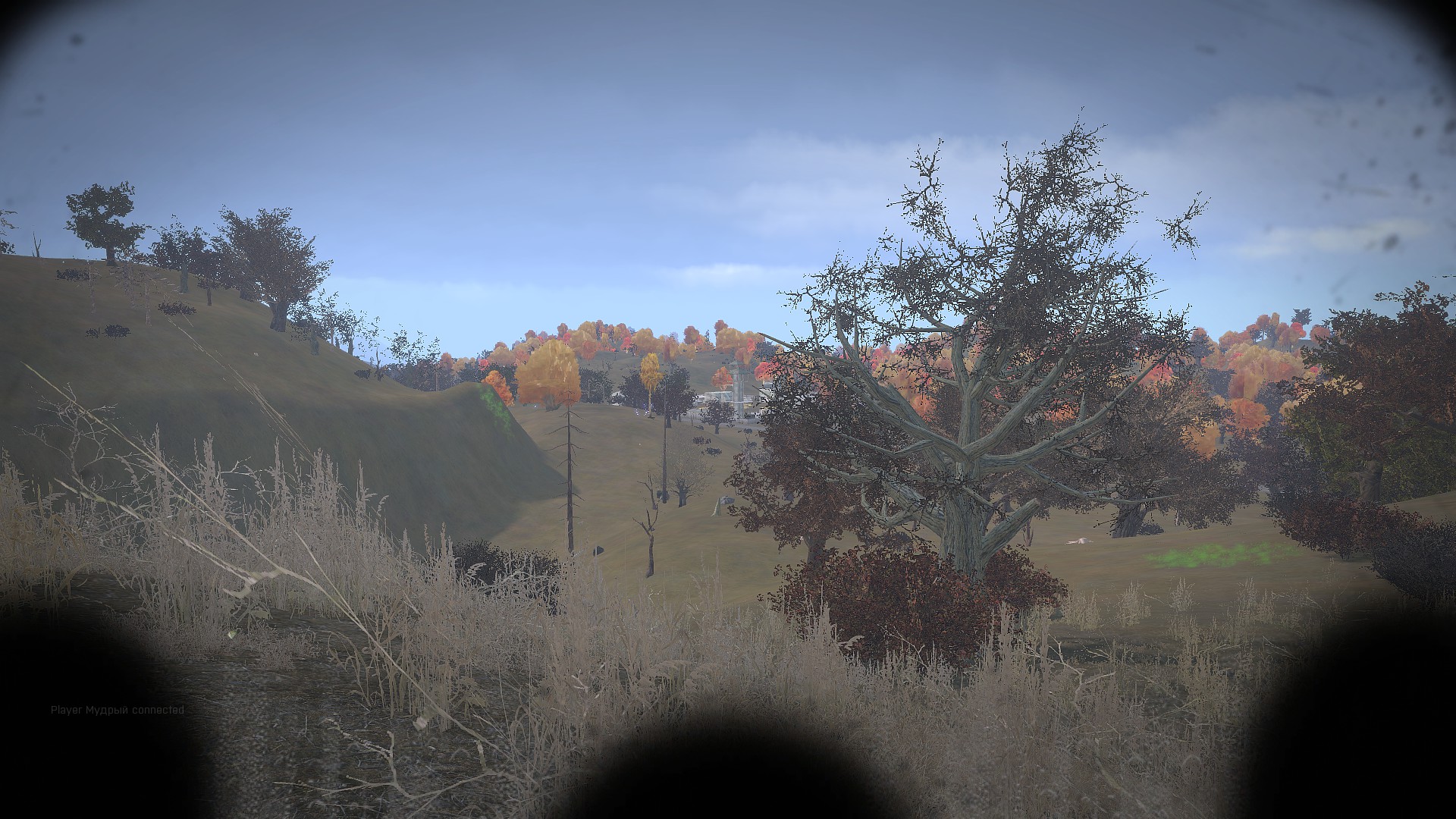 There was a clearing, and a small outcrop of buildings ahead, about 300m. We all moved across, steady, at a combat spread - 2 teams staggered some 75m apart. Alpha reached the highground and they started orienting to face something behind us... we quickly merged the two groups on top of the hill to see what was going on.

Sure enough - I heard the word "Burer" ... and we could see that where we had come from, a single Burer was tromping towards us, with the upright walk of any Arma 3 civilian, obviously still very work-in-progress, much like the Bloodsuckers you saw in the video. Since this account - there has been tons of work on these mutants - so things would be different if all of this was filmed and experienced now, even in the same server. 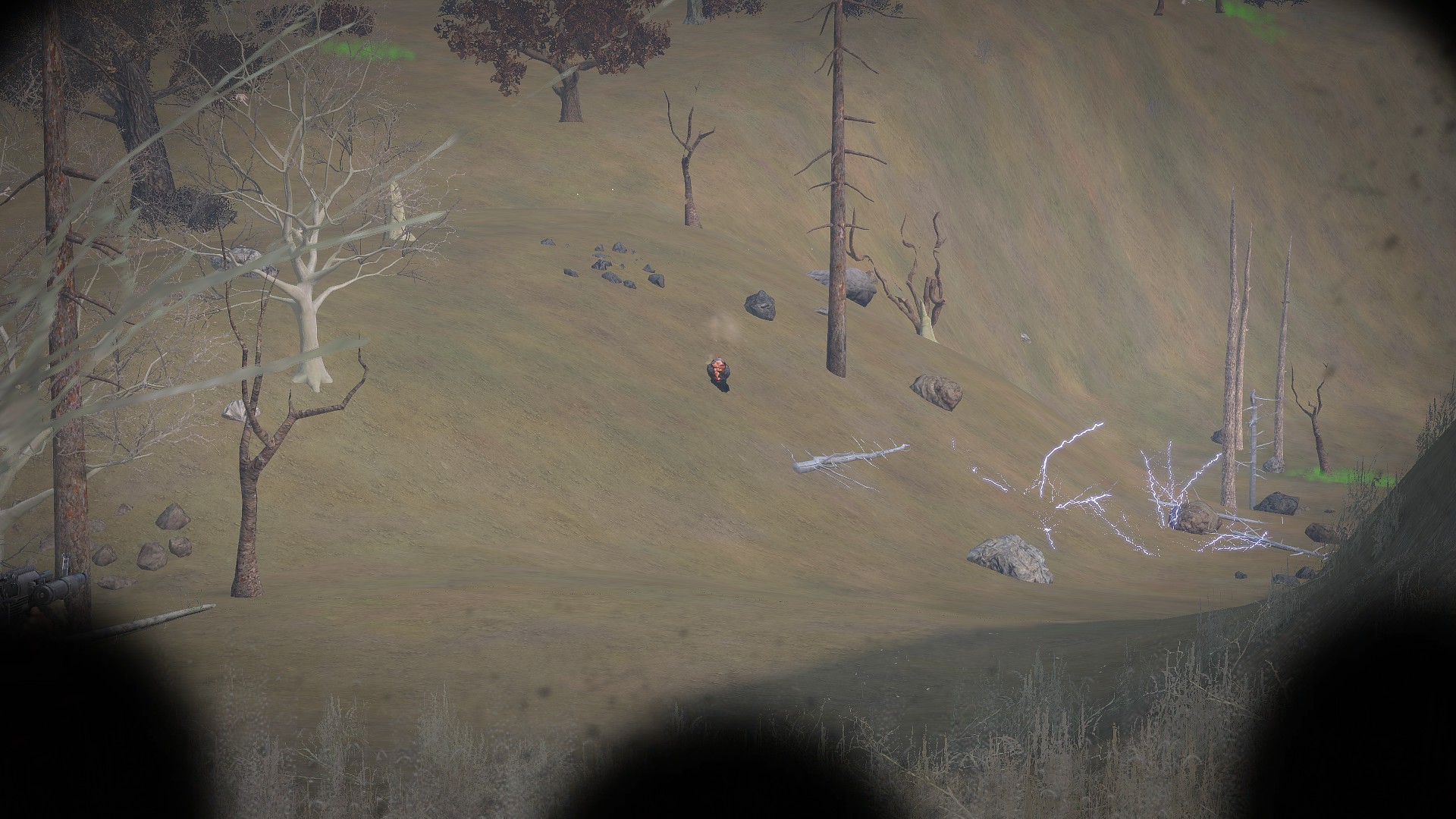 We opened fire, and spent a mag a piece tearing the Burer to shreds. He took a lot of damage, but he was dangerous. At any moment he could unleash a Psi attack that kills in just a few hits, turning one of us to a Zombie in the process... We put him down without incident, and continued past the buildings to another road through the trees.

Here we stopped, staggered columns, checking equipment, and making sure we were all together. I saw the Red Trees begin as we reached the road... This was the Northern Forest.... a dangerous and unknown place. I started filming, and caught footage of a wild Bloodsucker that decided to ambush us. It was a "white" bloodsucker, one of three variants that are in the mod at the moment - the toughest, requiring the most damage from high caliber rounds. My 5.45 AKS likely was doing zero damage, but, I wasn't going to sit out the fight when people are in danger. I at least had to try.

We put down the Bloodsucker easily enough - and regrouped - this time a lot faster, as to get away from the scene where we had made all the noise... This Northern Red Forest was also the PvP area after all... We continued East, along the road - veering to the south again through the trees another 500 feet up. I was following the scientist... but I am glad I wasn't following too closely...

He walked right into an anomaly, seemingly at a moment when he was concerned with me... he died instantly.

After a few minutes mourning, we continued... and to be honest I was somewhat relieved... Like a criminal suspect being suddenly free from the grasp of the law...
Tragedy struck ahead - we lost two Clear Sky fighters from Alpha team to the same Trampoline anomalies, on top of the same ridge. I climbed up, prone - under the whirling invisible death - at the encouragement of Yazik and Alkash - to retrieve a level 3 Armor Vest from our fallen Brother's body... Also taking his magazines and bandages for the cause of our own survival.

Alpha had merged with it's VIP component, now just 5-6 of us... Easy pickings for predators in the Zone.

We climbed the very next ridge, and single shots started ringing over our heads... "Monolith" someone said, and we all crouched as we hustled around the terrain to get cover and also - to orient ourselves toward the danger.
It only sounded like a single aggressor, somewhere in a cluster of houses in the trees, or maybe behind them, shooting through the woods over the buildings at us... I moved to the South, pressing forward, as the shots are effective but not aiming for me at the moment - but something happened that I have never experienced in Arma 3 PVP before.
Suddenly, Loudly, and very Quickly, some - Man - started ranting in Russian on our radio. It was a monotone voice, possessed, and very deliberate... ranting for some 30 - 40 seconds...

It was so disorienting I went Prone, unable to hear his shots that were aiming to kill us... Yazik came to me - alone now without any sight of our team, and said "Follow Me" ....
The voice stopped as suddenly as it started... I moved behind my friend, crouched, while the shots still rang out, snapping the sound barrier as they pass over our heads...
Closer, closer, until WACK - one shot splintered a tree at eye level just as I passed... I went prone and evasive rolled, in order to cover my head in the defolade.... Shots rang out from the South west, wide on the Flank, which is where my team must've moved when they saw me move forward - behind me and more to the south, farther around.... A Burst of fire was exchanged, and a few single shots that were from either one of the combatants....

Soon, I knew it was the shots that finished off the attacker, because the UN soldier was calling me on the radio "Shasta, are you Ok? Go South." I linked up with him, the team just blitzing south now - not even caring at all to confirm the dead - in case there might be more closing in on us. The sun was setting, we ran, just the 5 of us or so left, after regrouping with Alkash and the Team leader. I was thankful to see everyone was ok.

RP curators can see what frequency we are on, and they can choose to initiate any kind of encounter they can think of... the possibilities are somewhat endless - and this Curator had decided to take a Monolith Fighter, equipped with our radio, and attack us. I was thankful he didn't kill any of us, because I was almost sure he could've killed me if he tried.... 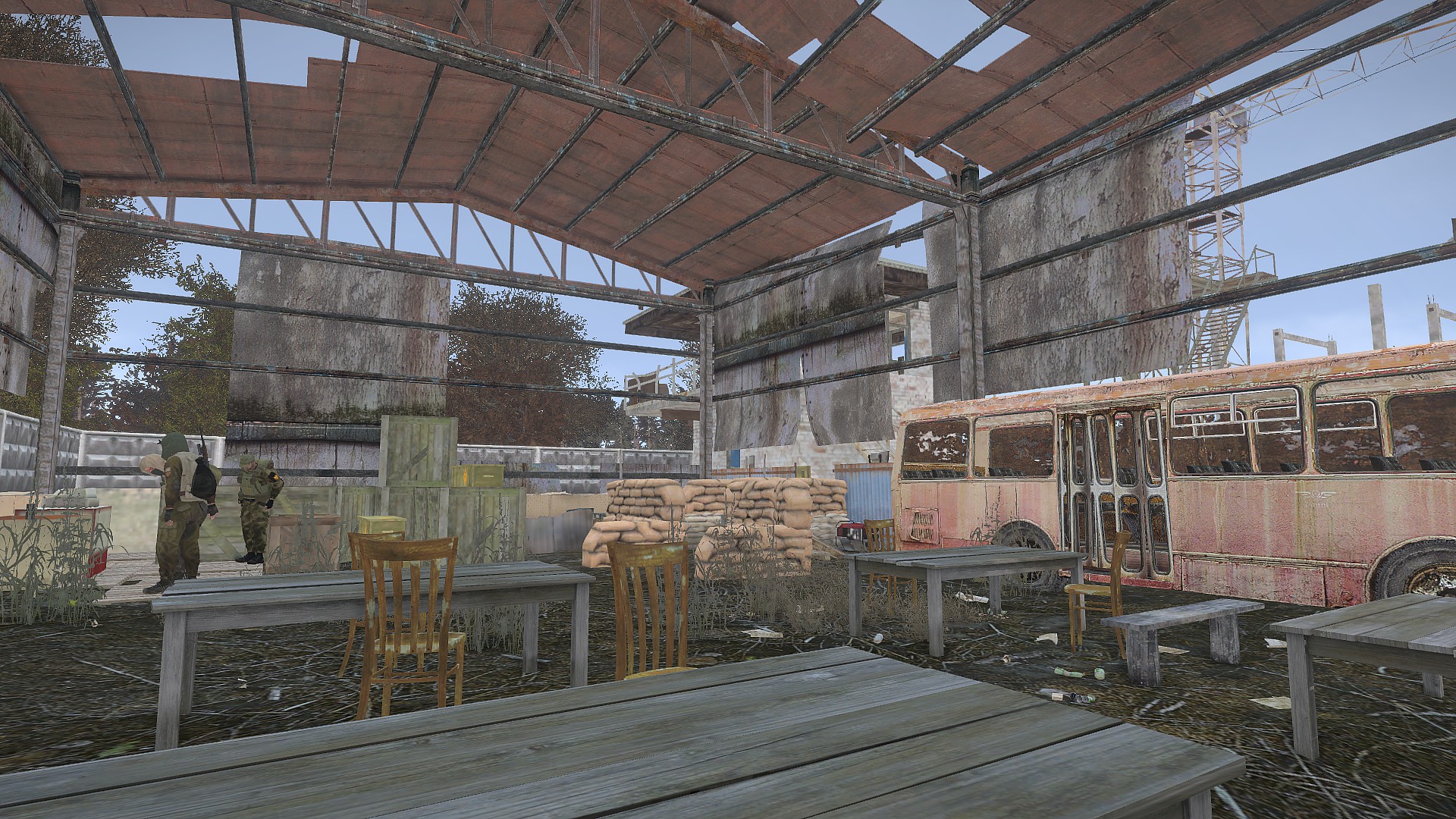 It seemed like no time at all... we were at the Freedom Trader, and at the gate - our two friends who died in the Trampoline anomalies back on the hillside, all geared up and ready - like nothing happened.
Yazik and Alkash got together with me, and gave me an offer to go along with them to kill the bloodsuckers....
How could I refuse!
But... It seemed I had to... I felt like I almost had got my new friends killed, asking them to help look after me. I had to stop and let them go ahead - as long as my friends promised to meet me again sometime.
I logged out extremely happy and excited with my time in ArmStalker RP. I had met new players, had new experiences in the same old mod I remember - but with all new players and all new places! 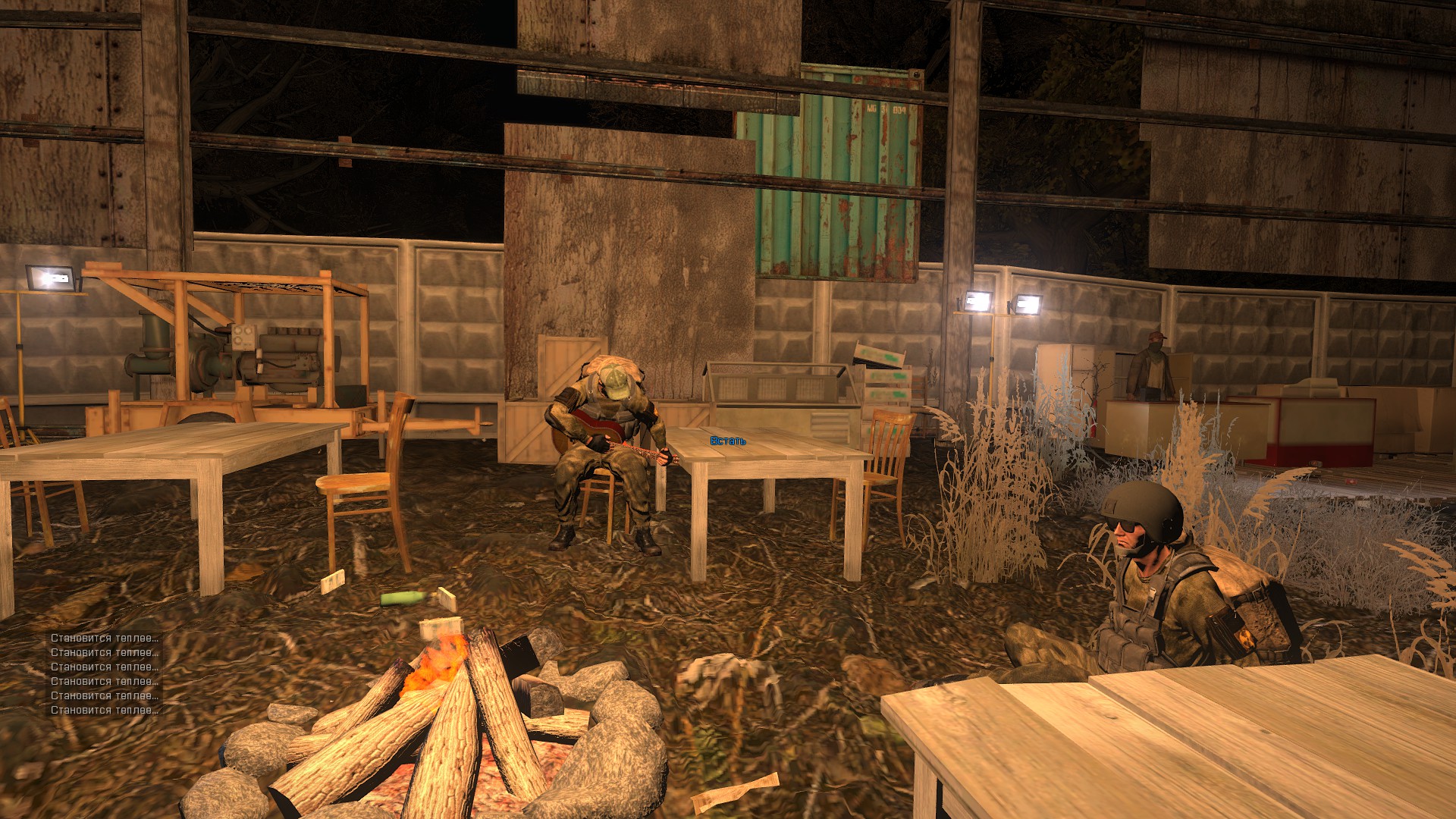 Join me next time, when I travel alone to East Bar, meeting with Yazik and Gura, who take me hunting for dogs!

Hi ! Do you have some link to the test server application ? Is it still possible to apply, even not knowing russian ?

Well, it is not easy for anyone who cannot speak the language. If you want to get involved with the community, it is here, but to apply as a stranger is very difficult without knowing Russian Language. The mod will be translated and we will be able to host it after release, so it is probably best to wait, unless you love our community like I do, and you strive to play a role in it anyway you can - like I did.