DESCRIPTION:
Meaning "tyrant lizard king," Tyrannosaurus was one of the largest carnivores of all time - 40' long and up to 20' tall

SOLITARY BEHAVIOURS:
Sleeping and Eating, thats about it.

HUNTING TECHNIQUES & STRATEGIES:
Tyrannosaurus used its massive skull and jaws as its main offensive weapon - it could bring down anything once it got its jaws around it. T. rex would pick out its prey, and charge it, mouth agape. Hunting parties of sub-adults could bring down even bigger prey than solitary adults. Smaller prey could be easily swallowed whole or a curious rex may pin it down with its feet, and pull it apart with its jaws either tasting it or figuring out how it works... When nesting, T. rexes could injure prey and bring it back to the nest for its young to practice on.

FOOD:
Hadrosaurs and Ceratopsians made up its main diet, however anything smaller than it, or occasionally larger could be considered prey.

TERRITORIALITY:
Fiercely territorial, rexes would mark territories with urine and feces as most predators. The only threat to an adult is another T. rex - a roaring match may occur, but if no one backs down, a violent fight could break out. Size usually is a first determinate of who gets the right-of-way.

SEXUAL DIMORPHISM:
Not much- females slightly duller colors than males, and females were larger than their male counterparts. Courtship between the two would be brief as the female could easily over power the males.

ENVIRONMENT:
Late Cretaceous habitat was much like it was today. The Tyrannosaurs hunted forest outskirts and grass-less plains. Most likely would stick to lower elevations, but as long as there was maneuverability room for it's massive size, you might find one in that area.

VOCALIZATION:
No fossil evidence of vocalizations, the size would say a loud roar, like what you get in documentaries and movies. JP did a great job with this.

MISCELLANEOUS FACTS:
T. rex had stereo-scopic vision - like a modern day bird of prey- this meant he or she had excellent vision and depth perception, "if you stand still..."..he still can see you. That quote corrected in Crichton's Lost World - Tyrannosaurus also had ears similar to a crocodile's - which have excellent hearing.

The arms of T. rex were tiny, not the smallest comparatively, but still small - they may have been used in grasping prey, mating, or help standing up from a lying down position.
The phylogeny includes Compsognithidae, this sub-family does not include Procompsognathus, which was probably a member of Coelophysoidea, more closely related to Dilophosaurus. T. rexes earlier cousins were much smaller and had close similarities to Compsognathus-like species. 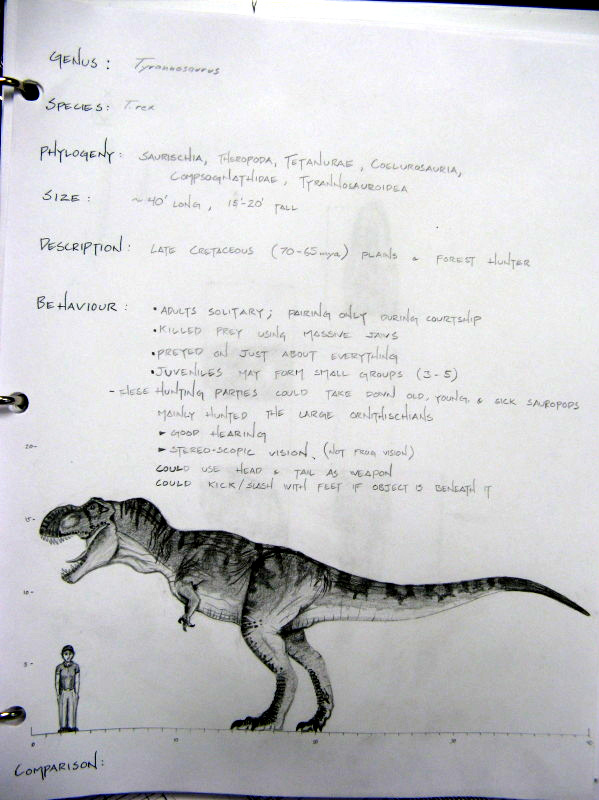 That was awesome...
looking forward to getting new stuff from you guys.

really awesome stuff!! question
will u be using these drawings which r great by the way!
or wil u be using ingame shots?

Sorry but what do you mean?

like for the pictur of him in the book, the pic of the T-rex, will the pic be more of a drawing as shown here, our will it be an ingame shot, or a shot from JP.

Oh ok. I am not too sure right now but it would probably be a drawn image like shown above.

Lol, thank you. I couldn't be doing it without a great team :). They have been doing an excellent job.

Ive been following this mod from day 1.. glad its back to work ! looking great guys! T.Rex is the shizzle just under a veloco. raiding group and diplasauraus.... that mother is huge and eats anything.

yeah, i kno wat u mean, same here, i remeber wen i first saw it i was like, this looks like a good idea, but proably wont make it, but i watched it anyways.... and im glad i did!

So we won't be able to stand still and not get attacked by the T-rex?

When you stand still the rex won't see you, we will make it like the film. The field guide shows you what these creatures were really like.

So,will there be any Ghillie suits avalable at the JP gift shop? lol