Four months ago, I put up my JRPG Arelite Core on Steam Greenlight. Today, I am only at 57% of the way to the top 100, and my ranking is slowly sliding down. so I figured that I would share some numbers with you, as well as my marketing efforts during that time period.

Posted by dragonslumber on May 4th, 2015

Four months ago, I put up my JRPG Arelite Core on Steam Greenlight. Today, I am only at 57% of the way to the top 100, and my ranking is slowly sliding down. so I figured that I would share some numbers with you, as well as my marketing efforts during that time period.

Before it was on Greenlight
First, a bit of a marketing timeline. I started Arelite Core in May 2012, building the engine as a makeshift tech demo. In October 2012, I launched www.dragonslumber.com, a landing page for the company I registered which also acts as a dev blog. One month later, I released “The Guardian”, a tech demo which I would use to search for an artist to team up with, to profit share. Failing to connect with someone, I eventually decided to work on the game on my own, acting as programmer, designer, writer, producer and of course, marketer for the game.

Arelite Core quickly evolved over the course of 2013, as its design was fleshed out, it's UI completed, and various artistic decisions were made. In August 2013, I cut ties with Lycus Arts Entertainment, an Indian firm which effectively stole several thousand dollars from me. My first facebook post was made in September of the same year and in December , I launched www.arelitecore.com, a second website which would be entirely dedicated to promoting the game.

There's little to say about most of 2014. By then I had 6-7 contractors working on the various visual aspects of the game. Design turned to alpha-ish, things were starting to make sense and in December, I released my first trailer. I also applied to the Indie Megabooth for PAX East, for which I was eventually rejected.

I mention all of this to show the efforts I put into marketing the game prior to launching on Greenlight. Besides doing a Kickstarter, I feel that most reasonable efforts for a one person team managing such a large project were taken. Nevertheless, I can't say that my efforts to that point had really succeeded. The facebook only had a handful of subscribers, the website had very few views and only spiked when I had new job openings. I never understood how to leverage Reddit, I didn't have a kickstarter, I don't use twitter very well, and since I had so many jobs to do, marketing did suffer as a result.

So, finally we come to January 3rd 2015, the date I put Arelite Core on Steam Greenlight. I did my due diligence, made the press releases and all of that, and after four days, the results were ok at best. 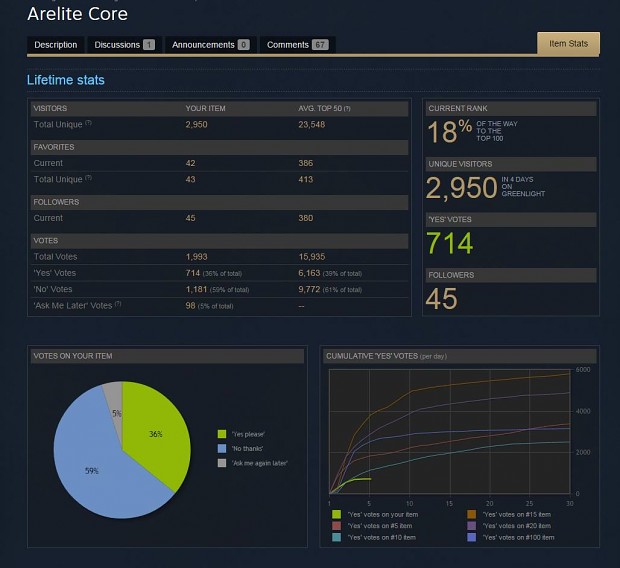 I wasn't really surprised however, due to how the marketing had gone to that point, and the fact that I'm promoting a JRPG. I think I have a solid design, but it's easy to see yet another RPG Maker and move along. I would say that a 36% yes ratio isn't quite what I wanted. And in the end, I do feel that votes for the game almost immediately stagnated. 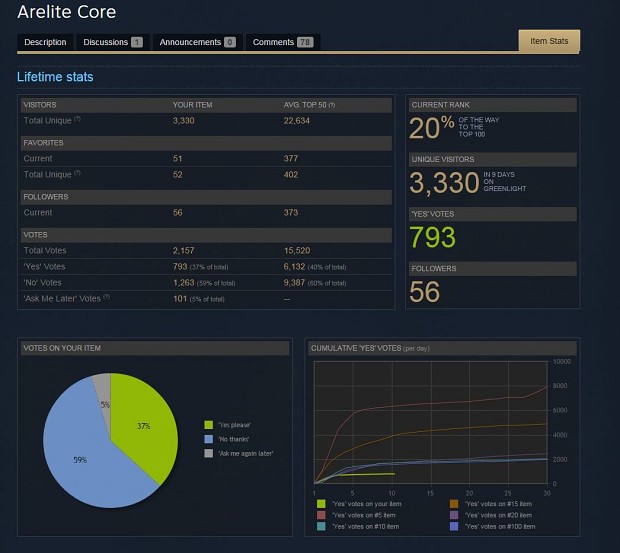 Only 20% to the top 100, graph shows how well under the top 100 game's performance I am. The game had some fans, and I made sure to respond to all comments, but the writing was on the wall, at least for it's initial push. I wouldn't make it much further than this on from the Greenlight listing alone. I did what I could, submitting some articles to IndieDB, promoting the game on Facebook groups, creating a banner for my website and so on. I even registered and use www.forgeyourlegacy.com as a link to the Steam Greenlight, to make it easier to list and make it more user friendly. Weeks later, I was at 25%. 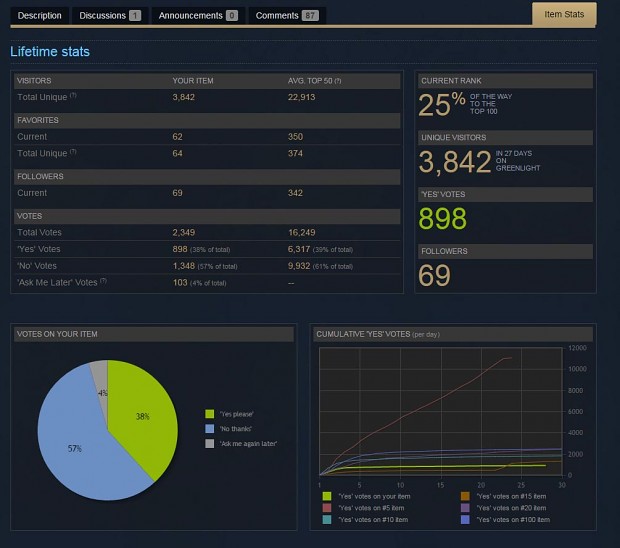 Now, I do want to give this one silver lining: over the course of the greenlight lifespan, the ratio of “Yes please” did increase, although I must wonder how many of those would translate to sales. We all know how to tap into indie resources to scratch each others backs, so the actual number of yeses in there must be lower than that. 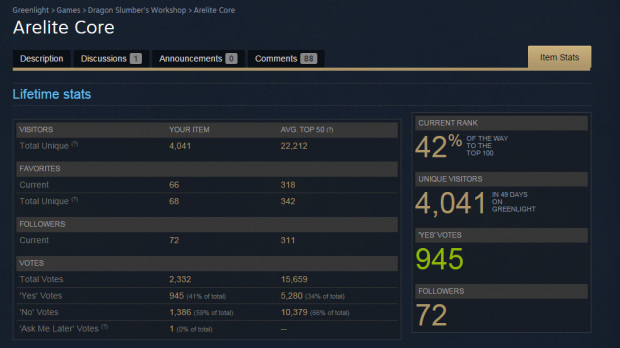 It was around this time that I went to a small local convention with the first public demo for my game. The con japan culture themed, and a lot of the people I met were clearly not usual gamers, being impressed by some tropes which has become industry standards. Still, the feedback was generally positive, I distributed about a hundred fliers and came out of it with reasonably positive expectations. 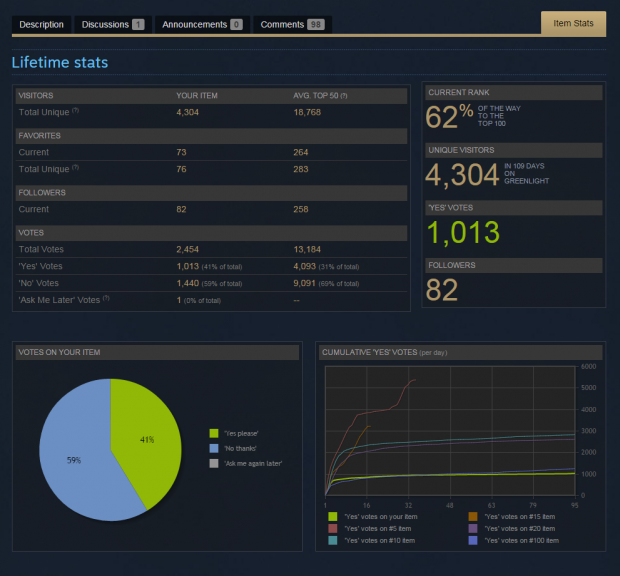 But the numbers tell a whole other story. As you can see, there are less than three hundred more people who went to vote during that 2 month period and I didn't really see any bump from the convention attendance, either in votes or Facebook likes. One interesting fact however, my ranking jumped from 42% to 62%, which I'm guessing has less to do with my efforts than Steam approving other games. In fact, within 12 days, I slowly dropped to 57%. 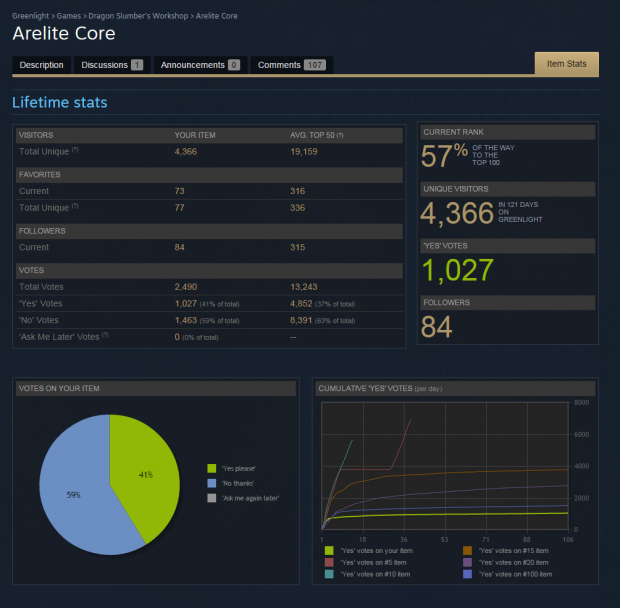 So, four months later, where do I stand on getting greenlit? Well, mathematically I'm half way there, but if I don't act, I know there won't be any push. I still have a few tricks up my sleeve, I'll soon be finalizing a demo which will finally show off all of various gameplay improvements I've made, and can hope to create some buzz that way. I also intend to release a second trailer with more emphasis on the battle system, since I feel that I need to sell people on battles before I sell them on Arelite Core's story. Finally, I'll be doing a Kickstarter before too long, I have a lot of creative ideas outside of the game, like a card game, and since I have amazing assets and artists, I can properly leverage those.

In the end, the fight continues. Like every other Indie Dev, I believe my game is worth it, but it's success is entirely reliant on how much effort I'm willing and able to put into promoting it properly. It's a tough job, especially being the sole guy on the project for all intents and purposes, but that's what I signed up for so that's what I'm going to do.

To find out more about Arelite Core, you can visit the following links:
Website: arelitecore.com
Facebook: facebook.com/DragonSlumberGames
Steam Greenlight: forgeyourlegacy.com

We are currently preparing for Steam Greenlight ourselves and this was a useful read. Quick question: have you tried doing press outreach and if yes, what were the results?

At the same time, I have a suggestion that might help. I noticed that there are no images on your Steam Greenlight page.

Why not add a few, as well as separate the text into meaningful sections? Not only will this help with navigation, but it will also make the page visually more attractive.

The game's art style is OK, but as you mentioned, it really doesn't help Arelite Core differentiate from that 'typical game made with RPG Maker look'. This might be a tough decision, but have you considered improving the visuals?

Hey Ronix, thank you for your response

I've tried doing a bit of press outreach, but clearly not nearly enough as warranted. I think they say you need to reach 100 people to get 2 or 3 answers and I didn't manage to do that much. At the end of the day, because I'm balancing so many jobs, that does become a problem and I'm starting to consider to bring a marketing person onboard to manage social networks, forums, press liaison and so on. It's just too much work to be done well by a single guy in my position.

I'm not sure I understand about the Steam Greenlight images, is it a section on IndieDB I'm unaware of? Because my actual Steam Greenlight page does have screenshots and what not. Unless you mean in the body of the page?

The game has definitely suffered from being a one man project, especially when it comes to visuals since that is my weakness. You'd be surprised how many artists I've cycled through over 2 years just to get this level of quality. A lot of this is second iteration stuff, if not third. I think the battles look great, so that's where my marketing push will go on the short term. That being said, I really hope to find a good stable artist for my next project, something I can partner up with and share the management load.

For now though, I'm already in debt and I'm still tens of thousands away from just finishing the game like this. I'm looking into doing a Kickstarter but after KS fees and rewards costs, I don't expect to make more than a handful of thousands.

But you know, Rome wasn't built in a day. Or for cheap. Or by a single man, but whatever :P

Getting some help with marketing is definitely a viable option to consider. We are a team of 7 and still the amount of work related to social stuff, pr, etc. can be staggering.

With regards to images on SG - yes, I did mean including them in the body of your Greenlight page, as well as placing a few selectively in the description. Here's an example of what I mean - Steamcommunity.com

Yeah, being one means more control, but it definitely can become a bit overwhelming at times.

That's a good example you presented, I'll definitely look into improving that page. I definitely tend to be more verbose than I should, and less visual. I crack myself up at how non user friendly my game engine is when designing maps and events.

Thank you for all of your advice, I definitely appreciate it.