Outline of the concept for the SimMars mod.

The overall concept of SimMars has a semi-realistic approach. Everything should be based on reality, but leaving room for deviations.

SimMars takes place at a time when the colonization of Mars has advanced from early stages to having a basic infrastructure installed on the planet.

The environment will still be life-threatening. Extreme climate (like the extreme cold or extremely dusty winds) have calmed down already through a started terraforming process. This process however will take centuries and therefore a fully terraformed Mars will not be featured in the mod. This means no plants and no air to breathe, no rivers/oceans.

Technology in SimMars is at a point thinkable for in about 100-150 years. Cars hover (no flying cars), roads + highways are automated, maglev train + high speed rail (elevated) are available. Planes will be replaced with spacehips. Power plants will be the following: Fusion reactors will have replaced fission (nuclear) reactors as standard, high-efficency solar power will be standard as well. In addition there will be microwave-, biomass-, electro-static-, hydrogen- and a magnetohydrodynamic-powerplant (biomass will unlock with a certain number of farming facilities, hydrogen will produce water as side-product, magnetohydrodynamic will unlock as an uber-High-Tech reward). Wind power will not be featured because Mars atmosphere is too thin for it to make sense. Fire stations will be replaced by leak & seal decompression stations.

Architecture in SimMars must serve the Sim's safety first. Therefore the usage of glass is limited to security issues. Low wealth structures will have only very small windows, the higher the wealth the more glass can be used. Glass fronts should still be avoided. There will be some kind of airlock at every entrance. Life is mostly taking place inside.

The design style defined for SimMars is called the Utilitarian design (from: utility, to utilize).
As the name already implies its main characteristic is functionality. This style is defined by its simple and minimalistic building approach. Buildings should have a modular and technical look, especially smaller and lower wealth buildings should look like you can staple/connect them. Buildings should have external utilities such as pipes, tanks, and antennas. The higher the wealth the more hidden they are and the more decorative buildings can look.

The color concept is to have a general earthy + natural look. All colors are accepted as long as they are toned down and not overly bright and the spectrum of used colors either contains some red, orange, brown tones to match the rest of the SimMars buildings. Keep in mind that Mars is all red, so there won't be blue reflections in glass like on Earth. 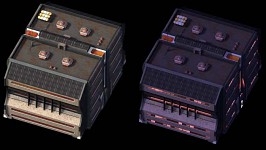 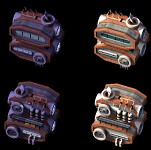 I love your artwork and idea of modular buildings. Keep up the good work.

wow the artwork looks amazing. Maxis should hire you- they could really use someone that actually knows what they're doing for a change. (seriously their last Sim City game was terrible).

Definately want to give this a shot.

LOL, which one of their latest Sim City game?

SimCity 4 is the last city simulation game of Maxis! These "latest" ones don't even deserve to be called such!

And yup, nicely done buildings for the mod. :-)