Post feature RSS S&Box: A Platform, Not a Game

Read up on the thoughts of DBolical’s editor, David, regarding alpha access to S&Box.

Origins of a Long-time Gmod Player

It’s 2012. I’ve started up Garry’s Mod for the first time and looked round the menu, and settled on gm_construct. Up to now, the only Valve game I’d played was Portal, and the classic mod Portal: Prelude. My dad was adamant the zombies and themes of the Half-Life games weren’t for a twelve-year-old, and whilst I would later sneak in a bit of Half-Life one summer when he was away, I spent most of my time in Garry’s Mod in the singleplayer, in Sandbox, on maps my dad had checked over via the Toybox, not allowed to spawn zombies or antlions. The first thing I did was pose the Spy from TF2 kicking the Heavy in the nads. 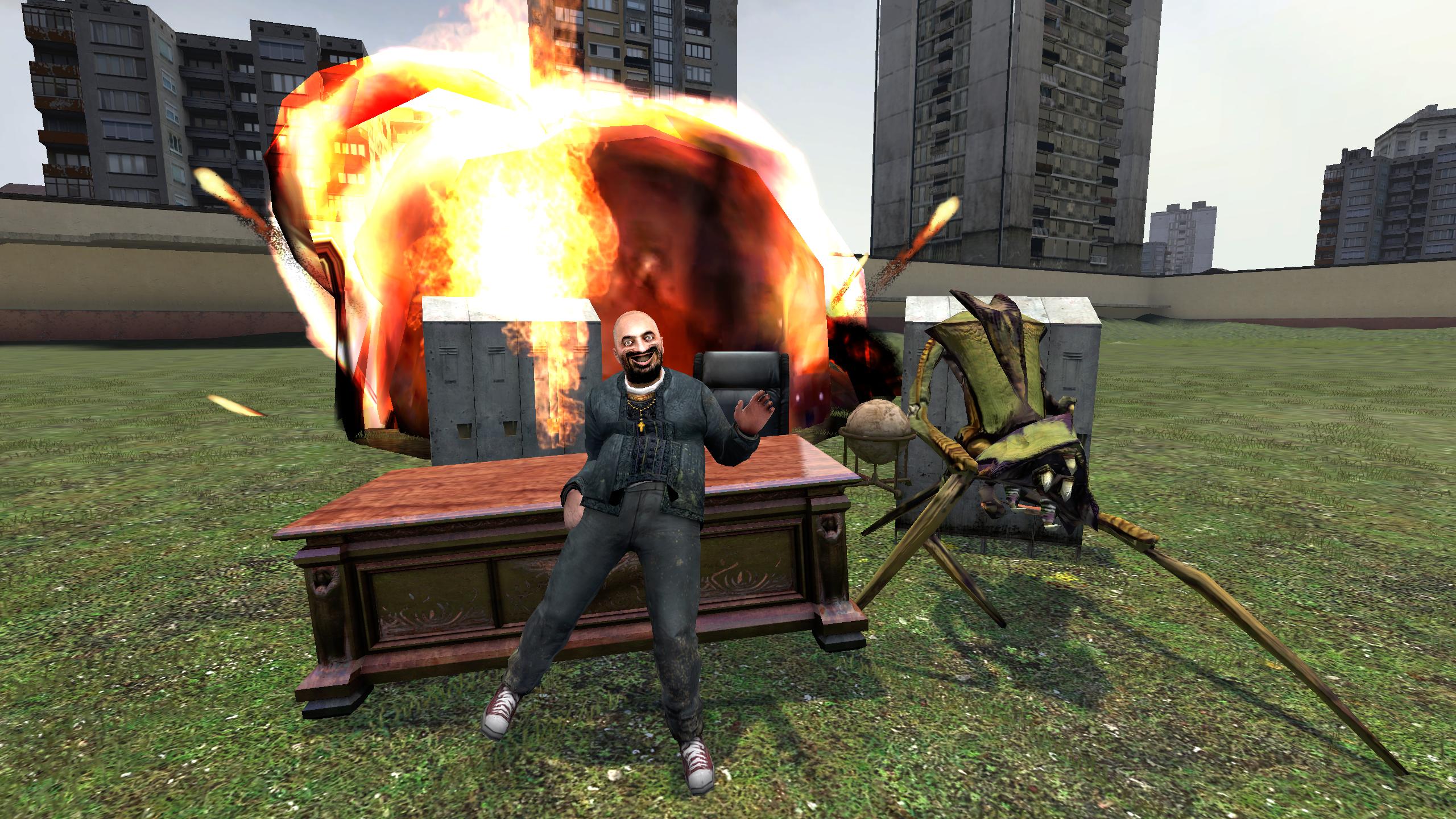 At its simplest, Garry’s Mod lets you make outrageous scenes using whatever assets you have mounted

What followed was a few years of messing around with cousins before finally venturing online, playing the usual suspects - Trouble in Terrorist Town, DarkRP, and Prop Hunt - and veering off course into Star Wars RP (on the DarkRP base). The last gamemode hit a chord with me on a lonely summer in 2014 and I made some friends - one of whom is still one of my closest friends today - whilst having a lot of fun. It’s here I got my beginnings in modding, learning how to create playermodels and reskins, and then I developed my skills. Garry’s Mod was a formative part not only of my modding career, but of my actual career, as it gave me a lot to talk about in job interviews over the years. It was a phenomenon that affected an entire generation of players, and probably still works influence over kids today that aren’t drawn in by the likes of Apex Legends and the annual CoD. 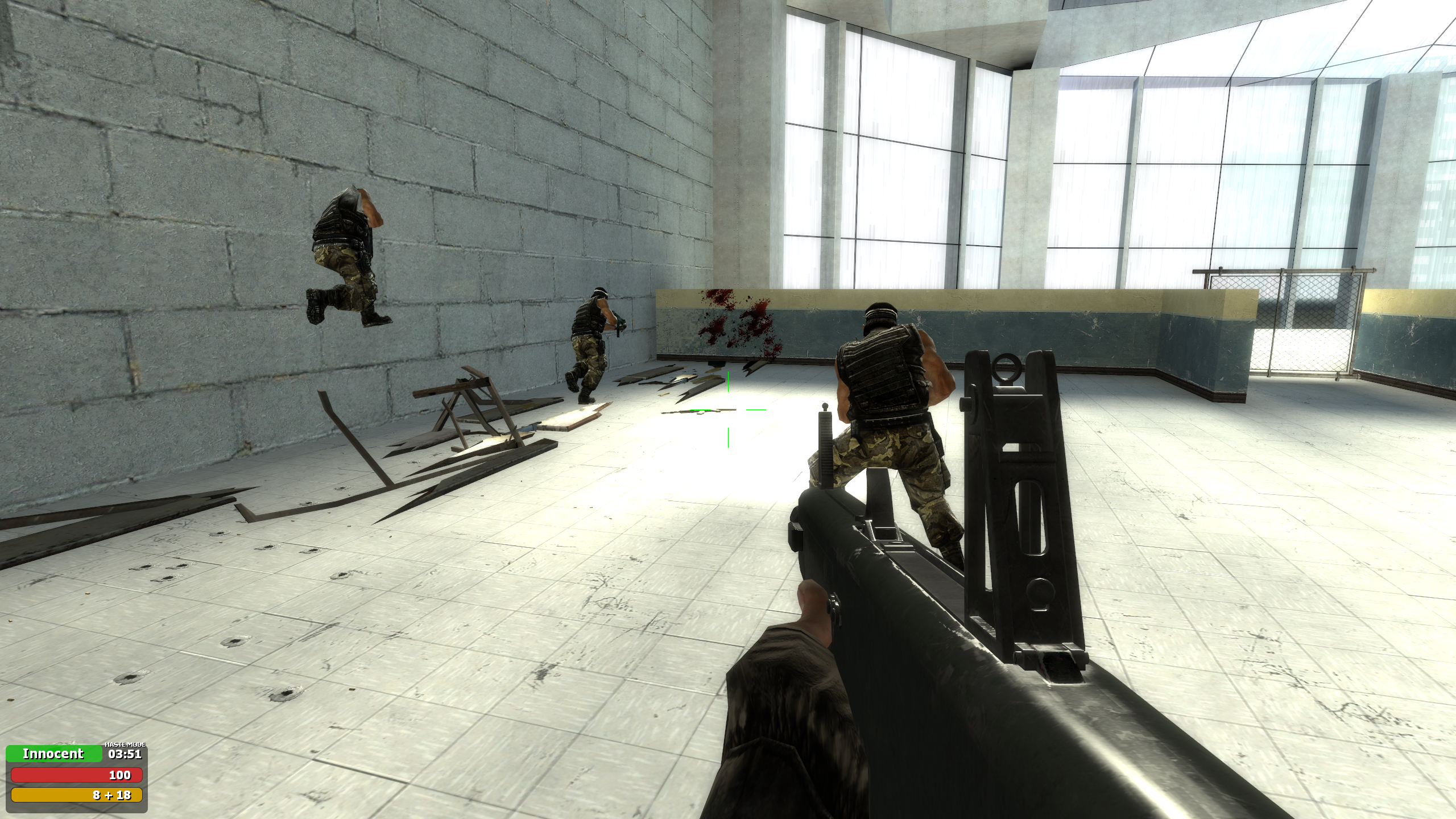 Trouble in Terrorist Town is one of the most popular gamemodes created for Garry’s Mod, a “whodunnit” experience that is great fun with friends and often frustrating with strangers!

Fast forward to 2021, and I got access to what a lot of people are calling “Gmod 2” - S&Box, the newest project by Facepunch, the studio behind Garry’s Mod and Rust. Built upon Valve’s Source 2 engine this time, it looks like a cut-and-dry case from the outside - Garry’s Mod on a newer, more powerful engine. Having now gotten to grips with S&Box - some of the tools, and mostly the online play - I think that’s not an incorrect assumption, but it misses the mark. 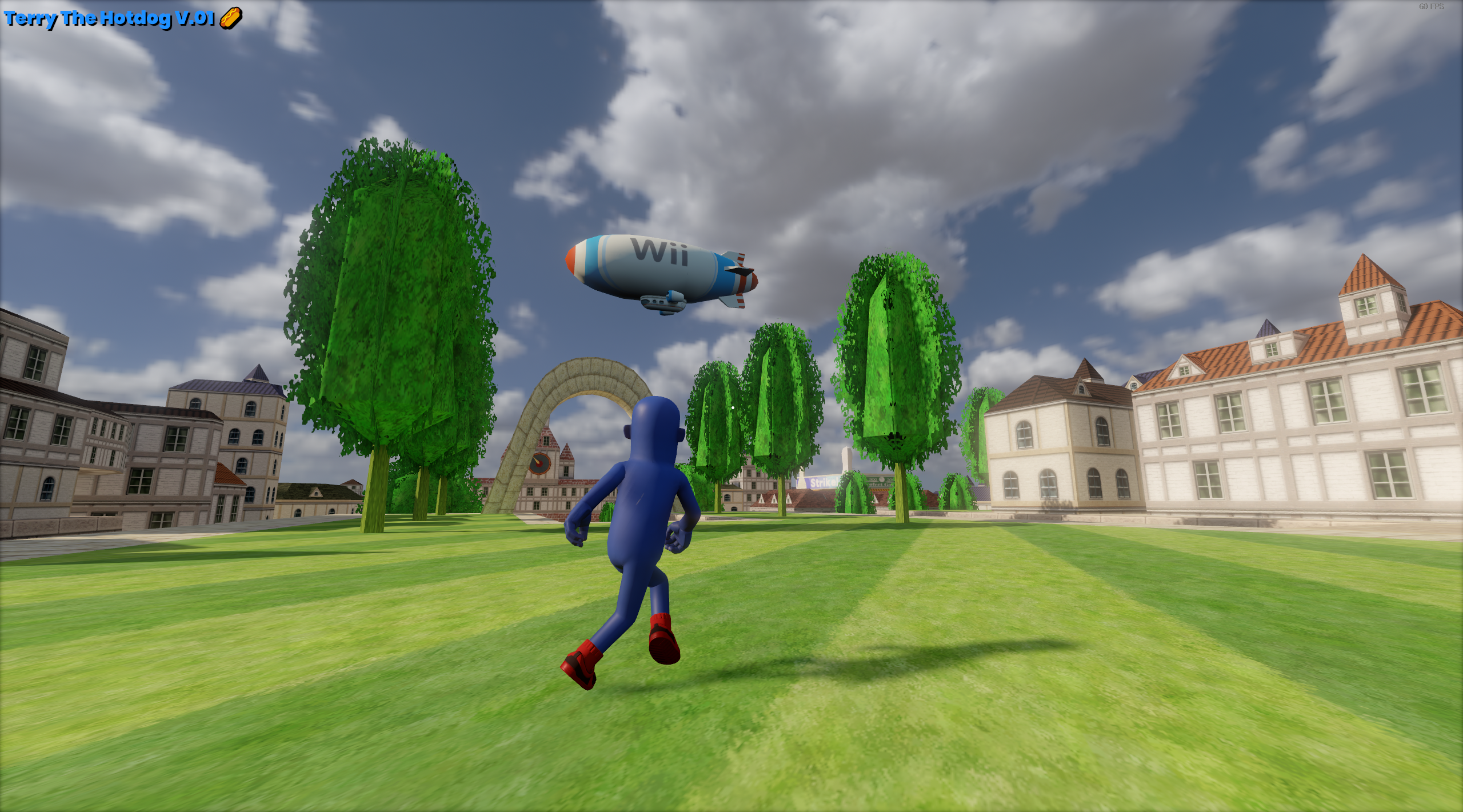 Garry’s Mod’s insanity is alive and well in S&Box. Pictured - Terry the Hotdog, by Omega; a Sonic the Hedgehog spoof on the village map ported from Wii Sports Resort

The easiest way I can describe the difference is this - Garry’s Mod was a game you built on top of. S&Box is the platform you build the game on. If you had nothing else - no other games besides Garry’s Mod and Half-Life 2 - you could play through the campaign, spawn zombies, multiple friendly NPCs like Alyx, and make funny scenes in the background as Breen delivers his final speech to the player. If you had more Source Engine content - the episodes, TF2, and even third-party releases like Dino D-Day and G-String - you could mount those, and access all the unique content within them. S&Box isn’t going to work this way.

The main reason is no mounting, as far as we’ve heard - you won’t be able to mount any previous Source project, or even Valve’s own two releases on Source 2 - Half-Life: Alyx, and Dota 2. Secondly - right now at least - there doesn’t seem to be dedicated servers. Instead, games are hosted peer-to-peer, building on the system introduced during Garry’s Mod’s time in the limelight. You can pick any user-generated gamemode or map and start up a local server which anyone playing the game can later join. I would expect this would carry a few more restrictions later to prevent trolling of people’s games - private games and passwords and that sort of thing. The reason for the limited key rollout becomes increasingly apparent as you “play” S&Box - it’s reliant on creators, with a very limited foundation of content. 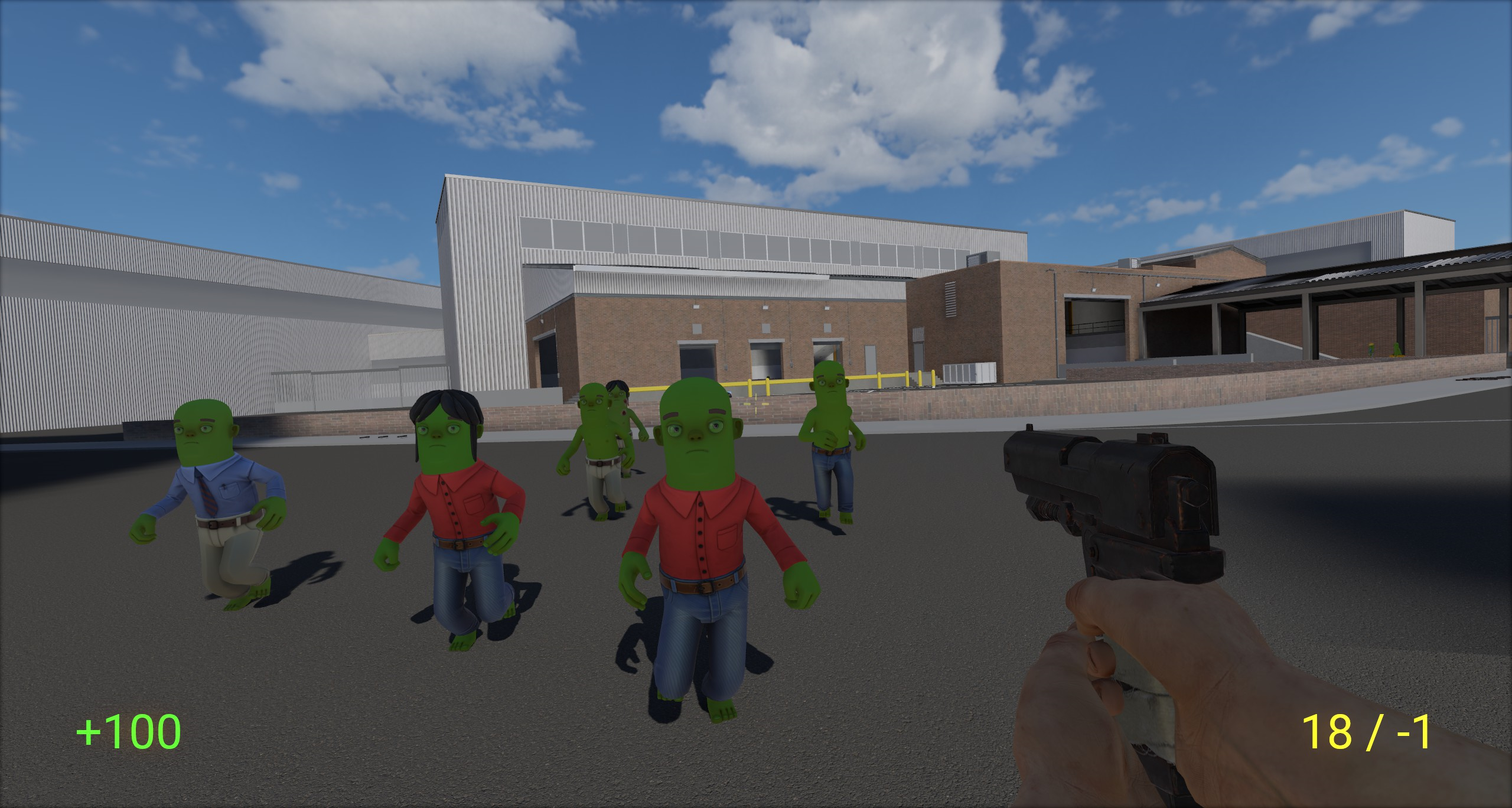 With a lot of placeholders, it falls to the current pool of developers to fill in some basic features - like hostile zombie NPCs in a prototype zombie survival mode, by Gvarados

In a few months, S&Box has already brought in gamemodes that would’ve been exceptionally difficult to create in Garry’s Mod, thanks to the more advanced scripting tools. Some great looking maps are playable, and, being on Source 2, VR support allows you to explore your creations more closely and easily than Garry’s Mod allowed (where several community-made plugins eventually were made. One exists right now for S&Box). The comparison between Garry’s mod and S&Box, for me, feels less accurate. From what I’ve seen, it looks more like it’s going for the “Roblox” style of content creation. You’re not building on top of a foundation - you’re building the whole experience. The potential is insane - some early prototypes feature procedurally generated, practically-infinite landscapes with RPG mechanics, whilst others mimic high-octane arena shooters like Quake and Unreal Tournament. All are playable with a handful of mouse clicks, and a fraction of the download/installation time that some of Garry’s Mod’s most ambitious gamemodes had to contend with. 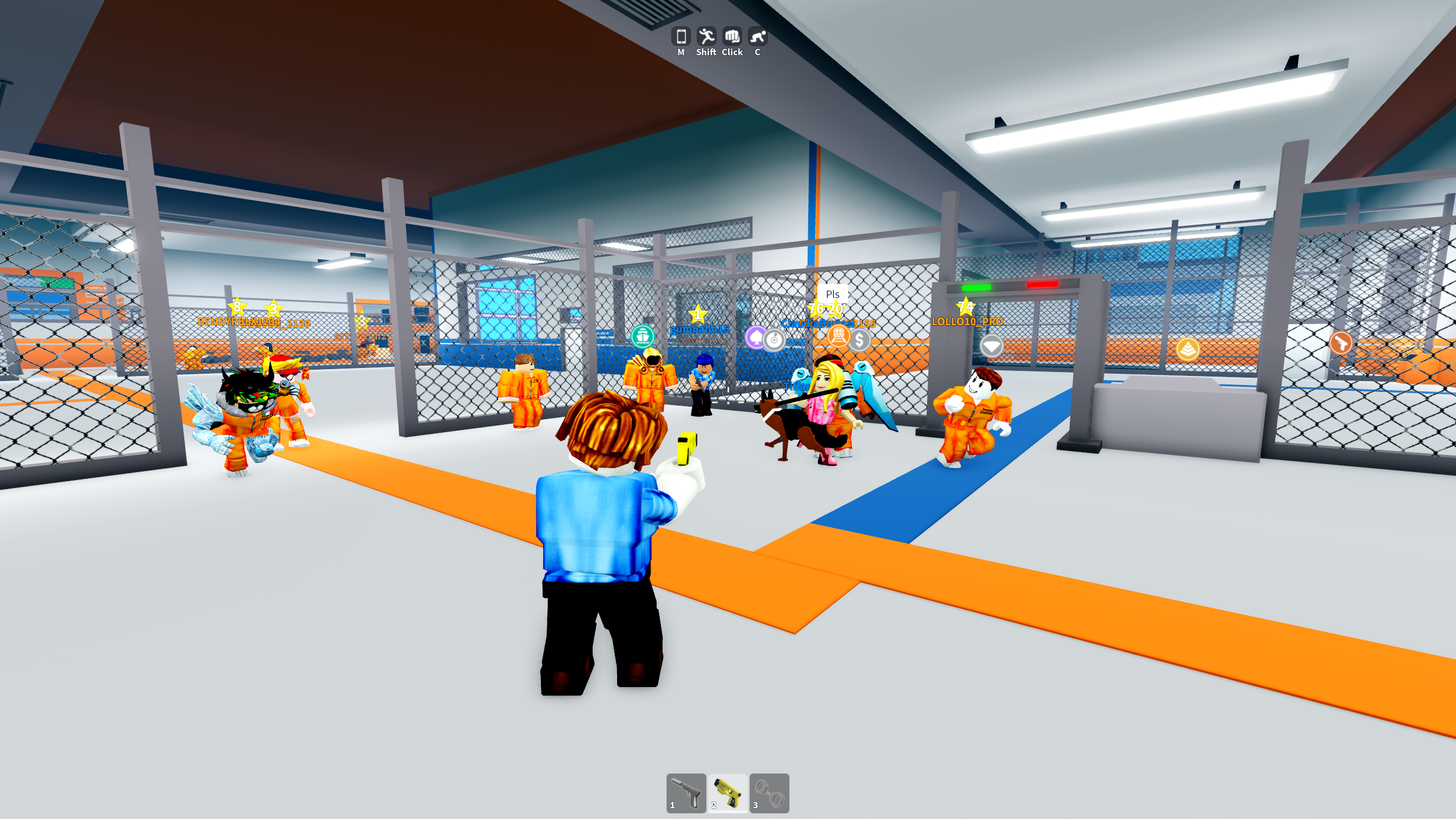 Roblox has very little actual “game” of its own, and instead relies on community content - called “experiences” - to provide value to its players, along with a mod monetisation system

But - at its core - S&Box remembers its roots. I joined a random sandbox gamemode - not to be confused with the name of the game, it’s the standard gamemode for Garry’s Mod veterans - and met with three other people. One was silently welding balloons to the ceiling in a TF2 spawn room recreation; another was staring at the floor, looking around every so often as they got used to how you moved. The third was more chatty - and as we spawned thousands of boxes to create a fort out of, we discussed Roblox, Garry’s Mod, and the future of S&Box. He’d made an ambitious and successful map for Half-Life: Alyx; I’d made a bunch of Star Wars models for Garry’s Mod. I met another developer in a prototype zombie survival gamemode working with a popular development team in the Half-Life community, Eagle One; and one of my friends who also has S&Box access claims he was on a server with Garry himself who, like a deity overseeing his creation, occasionally jumps into a server to see what people are up to.

Some S&Box waiting times have been causing a lot of jokes in the community (credit: Randomcatdude)

There has been much concern about the waiting time for S&Box access - people expressing disappointment their waiting time can be as long as eleven months. All I can say to those people is S&Box is, right now, not really made to be played. It’s given to developers and those with a track record for UGC to make sure that when S&Box is released to the general public, it’s already got a substantial base of user-made content to try out. It’s a clever move to make sure S&Box’s greatest draw is already present the moment it launches, and will blur the lines between the ‘platform’ and ‘game’ terms I’ve been using so far. At the end of the day, if nothing else - you can still pose one character kicking another in the nads. 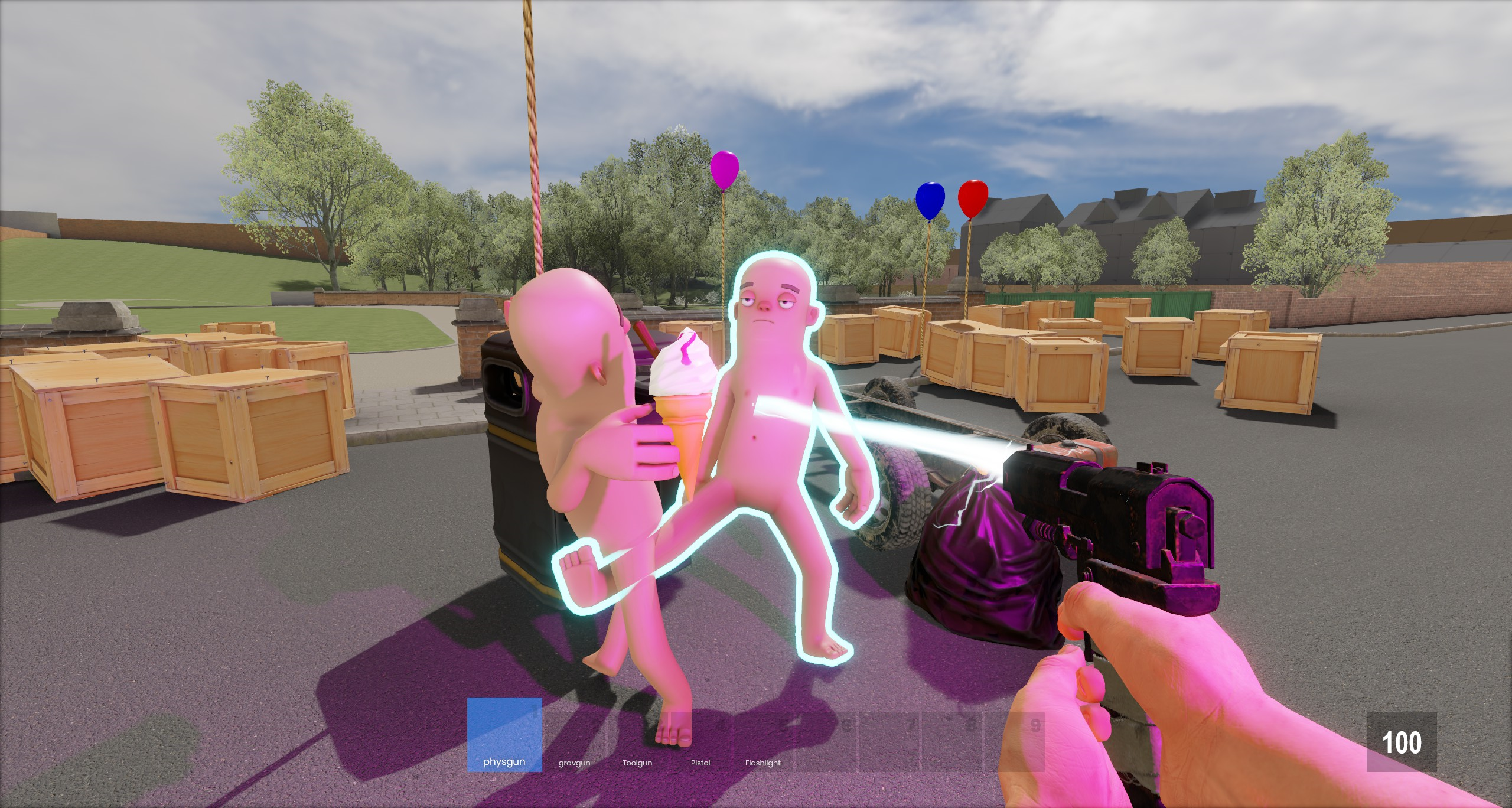 But why is this on portal prelude?

Hi, this was a weird profiling issue - now fixed!

It makes sense to get developers from the community, if the entire concept of your "game" relies on community making your content. But I didn't really understand why access was granted to only those with high Gmod workshop scores. It sounds rather weird. It's already as if they are calling it "Garry's Mod 2"

If they really wanted "experienced" content creators they should have looked at the workshop for games already using source 2, with similar scripting methods, and those that use PBR, etc..
Instead, they looked at a game that is more like a mod, uses a different material system and where the people already grew accustomed with the quirks, bugs and limitations of the engine in all areas ranging from material system to scripting.

In my experience as a 3d-modeller, people on source 1 are very reluctant to even consider the possibilities of a PBR shader. They rely on the existing shaders. They grew accustomed to them and even when I think it's unwarranted they say things like "Models using a PBR shader will look entirely different" or that materials would stick out, things like that. And I'm certainly someone to tell, since I have been advocating for it the past two years.

The high level gmod workshop creators are unlikely to fall into this area. They are source veterans and most of them use a PBR -> LMG/VLG workflow anyways. Hence to me it feels like they are just raising the expectations people will have for s&box as a "gmod 2" :
A lot if not most people that come after are likely to be overwhelmed with the new workflows, and the developers already ensured that the quality bar is raised ; redux.
The material system is different, levels are made of models and allow much higher detail, the lighting system works in new unimaginable ways.

How will content creators with less experience fit into this?
To me, it feels like they will have to learn everything from scratch again and I hope that we won't see dark times coming from it.
Thanks for attending my ted talk