After many months of studying and researching old scriptures from different sources, both official and fan-made, we have created a compendium of Etherian lore. Warlords and warladies, today we would like to present the knowledge we gained about the Dark Dwarf race. 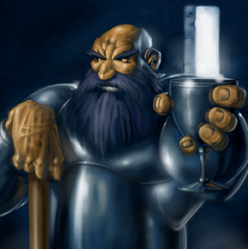 The tale of the dark dwarves is filled with fury and sorrow. They were once like their brethren, sharing their stubborn courage and boisterous camaraderie. However, the events of the Years of the Dwarves in 1321 sent many on a path of spiraling decay, from which they can never return. Feeling betrayed by the world, most dark dwarves are sombre people filled with profound melancholy. They yet share the stocky, hardy build of the dwarves, but most have paler skin and blackened hair. Where once they were jovial and eager, they are now hopeless, regretful creatures cursed to an existence of servitude to a dark god. Their society is driven by propaganda, fear, lies, deceit and manipulation. All the pride and honor of their race is meaningless to them, replaced by material gain, even if that means working with blood-enemies or making others suffer the same fate they did.

The life of a dark dwarf is extraordinarily difficult. Due to their society and polluted environment, most dark dwarves don’t live as long as their brethren. Many start working in dangerous coal-burning factories at a young age. Any advances in the workplace are meticulously and cunningly fought over. It is not uncommon to find a dark dwarf dead from poisoning, murdered with nearly dark elven proficiency. In many ways, they are as much a reflection of dark elves, whom they are friendly with, as they are of their distant cousins. As such, a dark dwarf can be difficult to get along with for anyone without a nihilistic ideology. They are just as gruff as dwarves, yet share none of the merriment and are twice as untrusting - especially of their own kind.

Despite their differences with dwarves, they still have the same stoneworking and metallurgical skills. However, instead of using their abilities to create beautiful wonders of workmanship and engineering, they employ their skills in creating the most efficient weapons and devices. Dark dwarves have a love of any valuable gemstone or metal and are willing to destroy the face of Etheria to pursue their reckless avarice. When it comes to warfare, most desire to be as far away from the enemy as possible, preferring to use machines and golems - whose construction is one of the most closely-guarded secrets in Etheria. To them, nothing is sacred, not even their creator’s own runes, which are often used for works of technomancy - the combination of magic and technology. Efficiency is obsessed over to the extent that the dark dwarves have created the most advanced machines in Etheria. It is rumoured that they even have a secret biological lab and have experimented with technomagical cybernetics - a feat shared only by Gorgon, daemonic goddess of destruction.

Dark dwarven culture is almost non-existent. Their society and beliefs are as stagnant as the fetid pools of pollution which their factories create. Much of their religiosity is focused around their inevitable death. Worshipping Morannin or Emrik is a crime for a Khazdhulan dark dwarf, while other areas are more tolerant. Most dark dwarves are buried in ancestral halls, which are also used for what little religion they have developed. The fate of the dark dwarves is very grim indeed, for the ties they have made with Bane have resulted in their servitude to him in life and death. Few have any real free will, and none can escape the clutch of the daemonic god. Enslaved spirits watch over their descendants, managing the lives of every dark dwarf. In exchange for immunity to Antharg’s disease, the dark dwarven people have paid the ultimate price.

Not all dark dwarves are so forlorn, and not all are trapped within their own society. The Silver Dwarves of Thalassia and the dwarves of the Khorum Mountains are noticeably more amicable and trusting. While their fate may already be sealed, some of these dwarves have even been known to express a curious sense of humour, though usually about trading, stone, metal, machines, runes or death. The joviality of their ancestors shines through at such a time, if only a little. At their best, a dark dwarf can be quirky and comedically obtrusive at the strangest times. It is incredibly difficult to gain the trust of a dark dwarf, but if managed, the bond usually lasts for life. Many Khazdhulan dwarves fake trust for their own gain, but such a bond is one of the few things that one with a purer heart does honour.

Dark dwarves are a polarised race. Some are just as evil as their master, while others try to ignore their fate and are more free-willed. Regardless of their ideology, every dark dwarf is haunted by the misdeeds of the past, and not a day goes by that they don’t regret the pact they made. Their mad obsession with technomancy and experimentation borders on the apocalyptic, whereas their search for perfection makes them one of the most dangerous races in Etheria. Those who dare to trifle with the dark dwarves will be met with a fate worse than death - the fate that dark dwarves share.

Definitely my favourite race, with many strong units, no serious weaknesses and fantastic theme! "Excavate or perish!"