Get ready for the ultimate stealth game! Can you stand the thrill?

There's a bunch of extra settings: 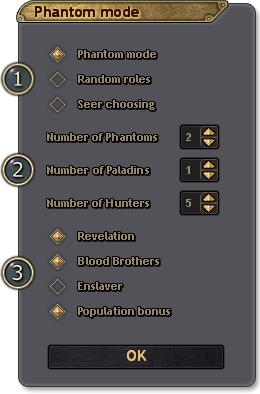 ● Activate the Phantom mode to play it on any Deathmatch map there is.
● A random amount of Phantoms, Paladins and Bounty hunters are chosen depending on the amount of players in the game.
● Should you choose to have a Seer in the game, the Player who gets this role will learn who the Phantom is in due time. But, will they speak? Will they share their secret?

● You can set the number of Phantoms.
● Enable the Paladin, the ultimate Phantom hunter, to fight by your side. In order to crush the Phantom he gets the same bonuses the Phantom does. Of course, now the Phantom can claim to be a Paladin to stay under the radar. Can you tell the truthful Paladin from the deceitful Phantom? Who can you trust?
● Anyone who is neither Phantom nor Paladin is a Hunter. Their job is to hunt the Phantom down and, if possible, end its tyranny.

● If Revelation is enabled, the Phantoms will learn every other Player's role.
● Blood Brothers allow two Phantoms to bond together and fight side by side.
● Enslaver lets Phantoms take control of their enemies once they have been defeated, forcing them to turn their backs on their allies and fight for the Phantoms.
● Population bonus enhances the maximum unit limit for Phantoms and Paladins.

Phantom mode can be activated in mirage settings.

sound very fun, but doesnt this system make the game last way to long?? i mean its either all vs all or everyone have to build and build until phantom decide to atk which can take VERY long! so either a time limit or some system which reveal the phantom after a while will be needed.