ENGLISH VERSION. This mod, for the FRENCH version of Vampire, adds 8 new clans, the histories for the camarilla clans, the application of the P&P rules, an integration of the CQM, as well as many gameplay modification. Just check here what it is about. 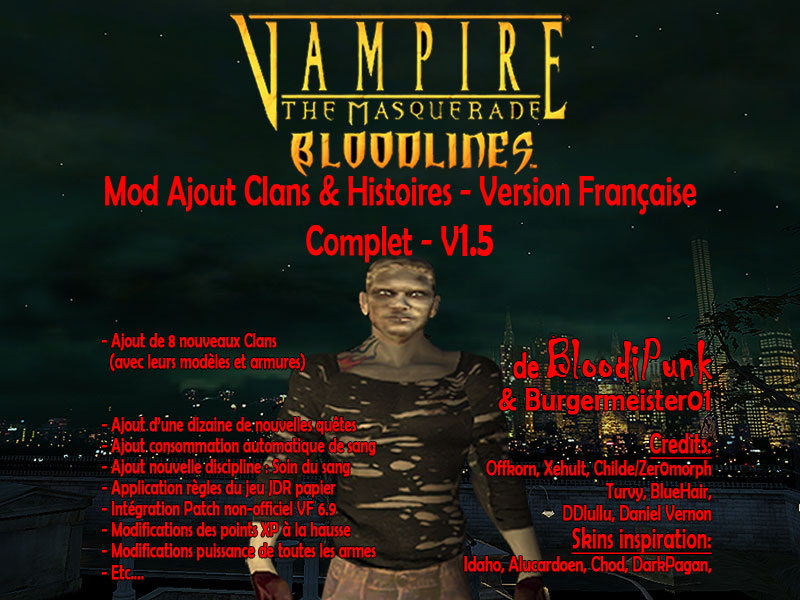 This new version of the Mod has the same features as the former version, while adding some interesting new features.
It is intended to be installed on a FRENCH version of Vampire: the Masquerade - Bloodlines.

THE MOD:
Addition of 8 new Clans and applying of the P&P rules of the orignal game
Inspired by the P&P Clans Add-on 2.10 Mod by Jack Zahn© (aka offkorn).
this is a free adaptation of this mod and not a french version of it. The work of Jack Zahn was just a (very good and very instructive) basis of workl.
NEW CLANS:
The Mod P&P Ajout de Clans et histoires count 15 Clans, with 8 new (with new models and more than 60 new skins) :

Integration of the histories for the Camarilla Clans:
Inspired by the interesting Histories revised Mod 2.1 by Xehutl©.
In order to add more interest for the existing Camarilla Clans, after studying this Mod, I have set up the histories for all Clans of the Camarilla, whilst fixing the many bugs of Xehult version
About :
- Gameplay modifications (stats, stealth, etc...) built in Xehult Mod, they have not been applied, prefering the modification applyed by the P&P Mod by OffKorn.

New discipline for all clans
Blood Healing : Discipline with 5 levels, allowing the player (whatever the clan) to cure his wounds and to regenerate more quickly, while costing one point of blood. The higher the level, the quicker is the recovery and the longer is the effect.

Integration of the Unofficial Patches for the french version
This mod was built upon the UP 1.8fr and has been regularly upgraded with Werner UP.
It is now at version 6.9 of werner's UP

Automatic Blood loss addition
New constraints from the v1.5, inspired by Camarilla Edition Mod 1.3 of zer0morph., in order to make you feel like a blood addicted vampire, your blood pool will now automatically loose 1 blood point every 4 minutes. Your stamina can slow down this delay, indeed, each point of stamina over 1 will add 30 seconds to the counter, so that, if you have 5 points stamina, your blood pool will loose 1 point only every 6 minutes (4 minutes + 4 x 30 secondes).
Your need in feeding is so intense that you will also find more pedestrians and blood dolls in the streets.

New Quests Addition
In addition to the blood loss process from the Camarilla Edition 1.3, the v1.5 of the Mod also adds the integration of the Clan Quest Mod v2.0 de Burgermeister01. This excellent Mod, of high quality, adds new quests for each clans of the camarilla from the vanilla game. It also adds new cut scenes...
The v1.5 includes these 10 new quests and did adapt them to be able to assign them to the maximum of the 15 clans of the Mod, and not only to the Camarilla's, like its is the case in the original CQM.
Moreover, each clan had only one new quest (+ 3 with the common quests), in the French version, many clans will have access to almost all the quests.
Quest for Toreador - Open to All but Nosferatu
Quest for Gangrel - Open to all
Quest for Tremere - Open only to Tremere
Quest for Brujah - Open to Brujah, Assamite and Salubri (Only the warriors)
Quest for Ventrue - Open to All but Nosferatu
Quest for Malkavian - Open to Malkavian, Ravnos and Follower of Set
Quest for Nosferatu - Open only to Nosferatu

Modification of all NPC attributes
In addition of these new integrations, inspired by the P&P Combat Mod of Offkorn, the v1.5 of the Mod also modifies the attributes of all NPC, in order to make them more clever and skilled, while reassigning their health points (which where ridiculous sometimes and really unfair for some NPC).
Your enemies will now be more skilled and tougher to fight, but human will have less health point than before, the same as you have, of course.

There are also some more improvements you will discover playing the Mod or reading the full colour documentation.