Post feature RSS Invertical - "Why do I need to collect the books & scrolls?"

A look at how I am answering the question "Why do I need to collect the books & scrolls?" in the puzzle platform game Invertical.

In truth I've always found the "what's my motivation for ... ?" questions rather odd. Why do I personally play games? Because I enjoy them? Why do I want to collect hidden objects? Because I enjoy hunting for things and the feeling when I find them.

In Invertical you could collect books and scrolls, hidden throughout the level. These usually meant a deviation from the main path and had an extra challenge, either making you risk dying or simply some extra, maybe more complex puzzle solving how to reach them. Given the game is at its most fun when you are trying to spot your route, collecting books and scrolls was intended simply to be an extra bit of fun. Having the completion total also gave players a reason to go back through the levels. However the question was asked "Why do I need to collect the books & scrolls?".

In the forthcoming massive update to the game I am looking to provide an extra incentive. This will be in the form of bonus levels that are unlocked when you get all the scrolls and books. These new levels will follow a set a design guidelines to make them a little bit different to the rest of the levels. For starters the room/level size is the same as the screen size meaning that straight from the off you can see everything on the screen at once. I was a bit critical of Portal 2 for having objectives that you couldn't see and whilst Invertical does have a consistent direction (up) and a map, having smaller and more contained puzzles can be more enjoyable. 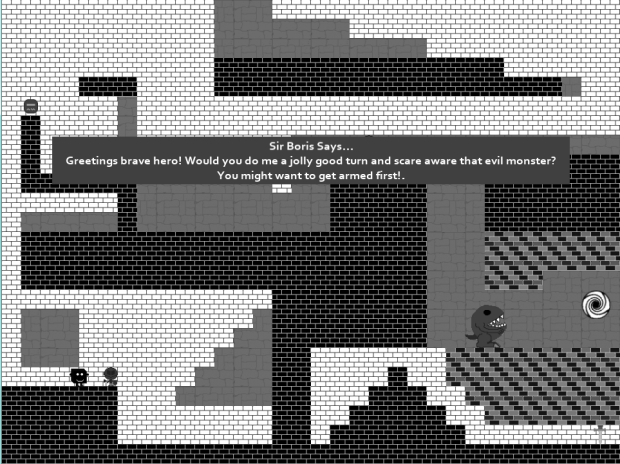 The other thing that I am looking to do with these levels is use more items and objectives that need completing before you can access the portal. Each level will have a NPC (machine, human or weird thing) that tells you what the objective is then usually items that need collecting. For example one level has the portal guarded by a blobasaurus rex monster (not a final name, or actually used in the game at all). A knight by the name of Sir Boris will give you your objective, which is to get kitted up and scare away the monster. Various other levels include retrieving cats for a nice old witch, getting power cores for a portal generator and retrieving a farmer's lost key. Simple stuff but it is a nice variation in play and they are enjoyable levels.

So in the forthcoming version of Invertical, why should you collect the books & scrolls? Because it is an enjoyable and challenging task to unlock cool levels!