Post feature RSS Getting ready to release your game or demo? Read this first!

We recently released the demo for our turn-based, tactical RPG Depth of Extinction that was featured and downloaded more than 1,400 times. I've collected some tips from our experience that may help you have a successful launch of your demo.

We released the demo for our turn-based, tactical RPG Depth of Extinction on Halloween, and it had a successful start for a game from an unknown developer. In the first two weeks of release, the demo was featured on both itch.io and GameJolt and downloaded more than 1,400 times. I've collected some tips from our experiences that may help you have a successful launch of your demo.

Have people play the game first

You can’t totally trust input from friends and family on your game! Just because they love it doesn’t mean that it will be a success when you put it out into the wild. You need to get a lot of impartial opinions on your game and convention expos are a great place to get this input. You will get a variety of players from beginners to experienced and can find out if your game is working for more than just fans of the genre. You will also get a lot of insight into where your game is falling short or what you can address in a tutorial.

We showed our demo of DoE at a few conventions during the month of October in Atlanta (SIEGE) and Orlando (OrlandoIX) to a great response. We even received third place in the "Excellence in Indie Game Design" awards at SIEGE in Atlanta, which was great validation that our demo was appealing to players.

Finding some regional game conventions where you can show off your demo is not too difficult. I recommend you start with this site.

Don’t sit behind the table at a convention

You can’t interact with people or see them playing your game from behind the screen. Get out there and mix with your players. You should try to connect one-on-one with every person who plays your game.

Have a largish screen at eye level showing a gameplay video 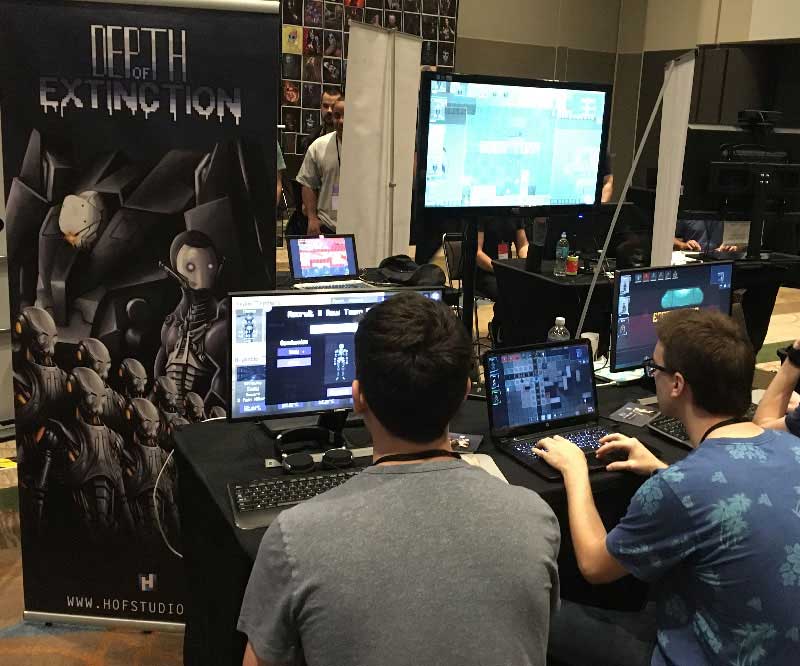 This doesn’t have to be a big screen TV on a stand. We used a $45 tall (22”) monitor arm and a 27“ monitor, and it worked really well. When people stop to watch the screen, don’t be afraid to ask them if this looks like a game they would enjoy. Then you can follow up by asking them to play or sign up for your mailing list if you don’t have a station available.

Before the conventions, we spent some money on large vertical signs for our booth and postcard and business card sized handouts promoting the game. While these things don’t hurt your chances, I would say that you don’t need them for the convention to be a success. They might help you stand out but unless you are working a large convention like PAX or GDC, they are probably not necessary. The most important things are to squeeze as many stations into your booth as possible and encourage people to play! You should also be confident in your pitch. You love your game. Don't be afraid to tell others why they might like it too. If you can't tell people this in under 30 seconds, then I recommend reading this link to help you formulate your pitch.

I can’t stress enough that building a large email list of subscribers is key to building a community around an indie game. I don’t think enough developers are working on this angle. For instance, Lost Ember is just wrapping up a Kickstarter where they have hit over 300% of their goal. Lost Ember is a fantastic looking game, but the developer posted on Facebook that they have a 5,000 person email list and that this really helped them at the start of the campaign. When someone signs up for your mailing list it is certainly not a guarantee that they are going to download your game or support you in the future, but it’s much more personal than just hitting the “like” button on a social site. You should also consider that reaching all your followers on a social site might actually cost you money. Get those emails - especially from people who liked your game!

Integrate the email signup into your game 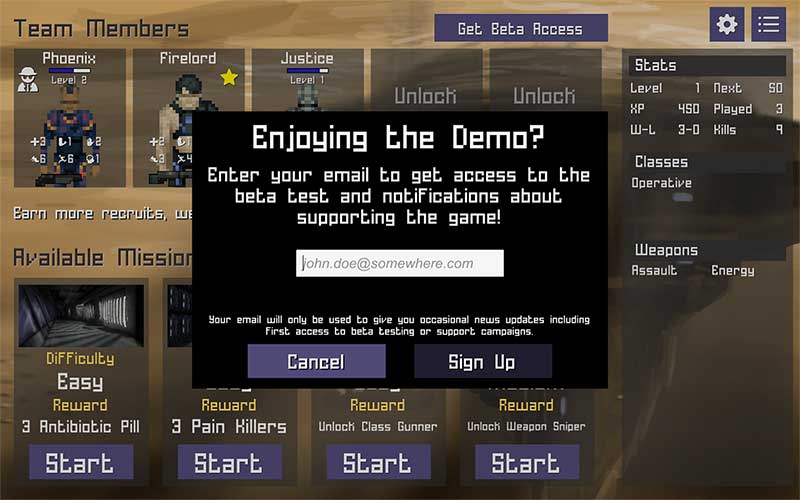 As you might imagine, there are a ton of problems with asking people to write down their email at a convention, not the least of which is actually reading their handwriting. You are also never sure if you are getting an interested player or a pity sign up. My idea was to collect the player’s email during the gameplay session and use it to save the player’s progress in the game. Then the player would have the option of returning later and continuing where they left off. We had it pop up immediately after completing the first mission. I suspected that this might be a big draw and turned out to be right. Of the 170 emails we collected at the conventions, more than half came through the in game sign up. We had far fewer bounces and better response on those addresses. It also saved major effort having to transcribe hand written email addresses. I was really surprised that we were one of the few booths at both conventions collecting emails from players and the only one (that we saw) who had actually integrated it into the game.

For the demo, we didn’t want to spam new players with our form, but we wanted to make sure that players who liked the game were prompted to sign up. So how do you separate a player who likes your game from a player who probably doesn’t? We were fortunate that this was obvious in DoE. A player that has played at least two missions and was successful in one would see the signup form. We do keep displaying the form after those conditions are met and until the player signs up, but it’s a free demo, after all.

What good is getting gameplay insight if you don’t use it? Take at least a few weeks to make adjustments to your game with the goal of providing demo players a good user experience. Remember that you won’t be there to explain the game to players who are downloading it, so a tutorial (even something simple) is likely a good investment.

Have an analytics solution that captures users and exceptions

There are a ton of solutions out there that can do this for you and most are relatively simple to implement. We are using Unity for our project but decided that Google Analytics made the most sense for us and was relative easy to integrate into Unity with this asset.

This is so important and an area where we stumbled a bit. We didn’t really look at our exceptions until the beginning of the second week, when we noticed a game-breaking bug that could happen at the very beginning of the game. We saw that it had happened about 35 times, which meant that 35 players had a poor initial experience with the game. We did manage to get an update out on then 10th day after the launch to resolve the problem.

Have a form where your users can provide feedback

We also missed adding this into DoE. Unfortunately, without the “report an issue” form our players had no way to tell us about the game breaking bug they were experiencing. Doh! You could also have other important insights lost to the void without a way for players to give feedback.

If you think press will like your game, use a PR firm

We had spoken to a number of PR firms about doing press for us but decided for the demo to try doing this ourselves, so we sent out advance keys of DoE to about 20 different press contacts. We only got a few write ups out of this effort that led to very few referrals during the first week of our launch. I wouldn’t say doing this ourselves was a mistake, but to some degree it did validate why a PR firm is helpful. Journalists for the most part don’t respond to unknown developers pitching a game demo. 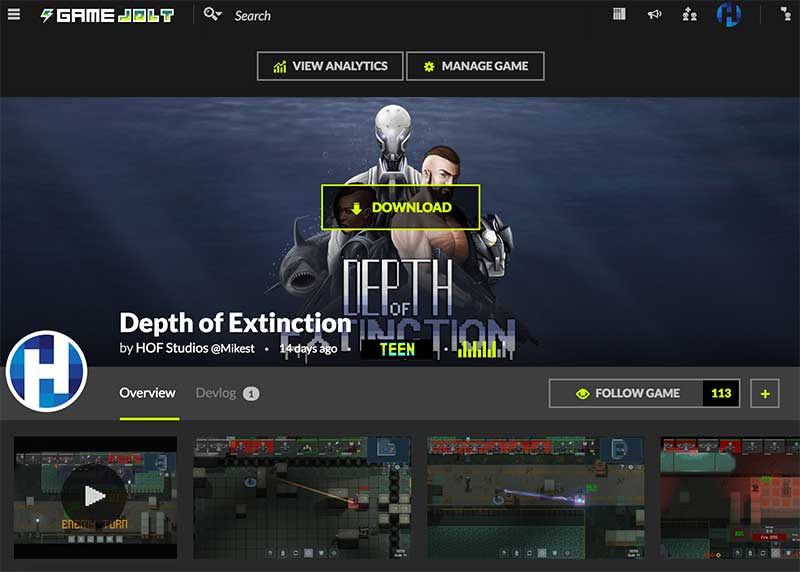 We were using the itch.io Refinery tools to share builds with the team and a few other people who were trying out the game and were originally planning to only launch the demo for DoE on that site. At the conventions a few people suggested we also check out GameJolt, which turned out to be the best input we received.

In fact, the real turning point of our demo launch was during the second week, when we were selected as a featured game on GameJolt on Monday (11/7). The response was huge. We averaged over 150 downloads per day after that and got consistently positive ratings and comments. The GameJolt community really surprised us to say the least.

Use a mailing service to send out email blasts

We had assembled a mailing list of a few hundred people (most from the conventions) and sent an email blast out to them on the day we launched, using the free MailChimp service that announced the demo was available. MailChimp is great for an indie, mainly because it is free and you get reports on how effective your mailing list is by showing you opens and clicks. I highly recommend adding it to your marketing tool belt. Overall, we got a lot more response to this email blast than we did from posting to our Facebook and Twitter followers.

During that first week, I reached out to the GameJolt support staff to ask a few questions. I received a personal response back so I decided to try asking for my game to be featured. The customer service person responded that the editors are a different group but that DoE looked “awesome.” While I can’t say for sure that this led to being featured, it certainly didn’t hurt our chances.

Meanwhile on itch, I noticed shortly after launch that our game did not show up on the “recently added” games. I suspected that this might be related to the fact that we were using Refinery and had created the game page about a month before the demo launch. I was concerned that this might have been a factor in the game not being selected as a featured game, and so I reported the issue on the itch community board eight days into our launch. It turned out that I was right about the issue as one of their developers opened a ticket about the issue. The next day, the game was featured by itch!

Doing all of these things won't guarantee your success, but some of them might make a difference for your game. I'm sure there are a lot of other things that cold be added to this list, so please feel free to give input in the comments! You can also contact me on twitter or connect with us on Facebook.

Try out our demo! (shameless plug)