This feature details the combat system in Void of Darkness.

Hey guys! As we move closer to alpha launch, I wanted to provide some more insights on the combat system in the game.

Firstly, the player will start out with a very basic ship with very basic technology, and through exploration, trade and commerce he/she can acquire technology and upgrade the main components of the ship such as engines and shields.

Below shows the Ship Visual Display unit from which you can view quick details on damage or power allocation, by clicking the various buttons marked as such, to switch between the outputs. This VDU will be redesigned, and you will know exactly what each button is for. (replaced with images). 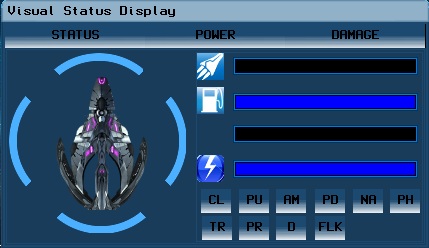 The bar marked by the lightning icon is your capacitor. Your ship's advanced systems, (when acquired) use this capacitor when they are activated. In Void of Darkness the player will be able to obtain a technology known as the Kinetic Barrier. This barrier differs from the usual 'shields' in some ways. While the barrier's activated, no enemy fire can penetrate it or cause you any damage. However, it won't last forever because whilst activated, it draws energy from the capacitor slightly more than the capacitor is capable of charging, so over time it will slowly drain your capacitor.

You will then be required to deactivate the kinetic barrier in order for the capacitor to recharge, because if it runs out the barrier will shut down automatically leaving your ship vulnerable to incoming enemy fire. Special weapons such as the ones we demonstrated will also use the capacitor and drain it over time. Weapons such as point defense, fustrum 'torpedoes', 'spear' torpedoes, mines and cluster torpedoes.

You will definitely need to use those special weapons to balance the odds when you are faced with multiple enemies. But as you might already be seeing, the more you use them, the less capacitor you have and the sooner your kinetic barrier will have to be turned off to recharge, exposing you to enemy fire. Now conventional weapons do not require capacitor and they can continue to be fired even if the capacitor has run dry.

Your energy will not take long to recharge, but while it is recharging, you can suffer signiicant damage while your kinetic barrier is off. This means you will have to manage your distance to the enemy and keep an eye on your capacitor while trying to take out your opponents. It would be wise to put some distance in-between, yourself and your enemy, before turning it off to recharge.

All is not lost while it is off, if you have acquired the point defense system, you can enable it to shoot down incoming enemy fire, even though it uses capacitor, the capacitor charge rate is faster than the drain of the point defense, and although it will recharge slower it will still recharge. Your point defense and armor can mitigate incoming damage during that time. Another reason to acquire the most upgrades such as armor, as you can, to enable you to survive for periods without your kinetic barrier activated.

The Point Defense system in action shooting down enemy fighters: 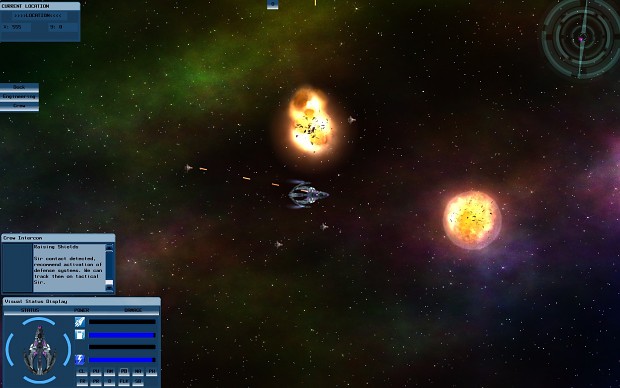 Another special device you can acquire is the ablative matrix, when activated it will increase your armors resistance factor to all damage. This combined with point defense will slow your capacitor recharge but mitigate a lot of incoming damage while your kinetic barrier is off to enable your capacitor to charge. Therefore the more of these types of special devices you acquire the more powerful your ship will become, they vary between offensive devices such as the fustrum torpedo, to the ablative matrix, to point defense and more.

An example of the balance included in the fustrum torpedo which will destroy all enemies
within a particular radius (an AOE weapon), it requires a full capacitor to fire. You must hold a button to charge it and it releases upon reaching full charge, if you let go of the button for whatever reason, the charge falls fast, and your capacitor does not recharge as fast. 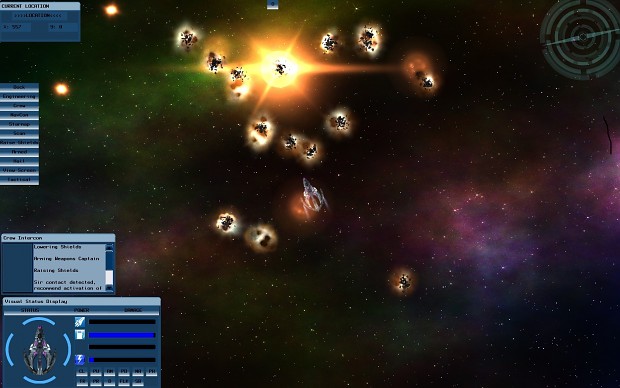 Therefore to shoot the fustrum torpedo you will have to disable the kinetic barrier to obtain a full charge in the capacitor, and then charge the torpedo. The torpedo does charge fast, and will release after about three seconds of charge, but will leave you defenseless since your capacitor has to recharge. If faced with a large group of enemies, the fustrum torpedo would be a good option, but if you miss a couple, you need to be prepared to take some hits while the capacitor recharges. Note however, that you can activate the kinetic barrier once the capacitor is above even 1 energy, but it won't last very long!

Another option is the temporarily named cluster torpedo which will release multiple smaller torpedoes that track towards enemy targets after the detonation of the main torpedo. 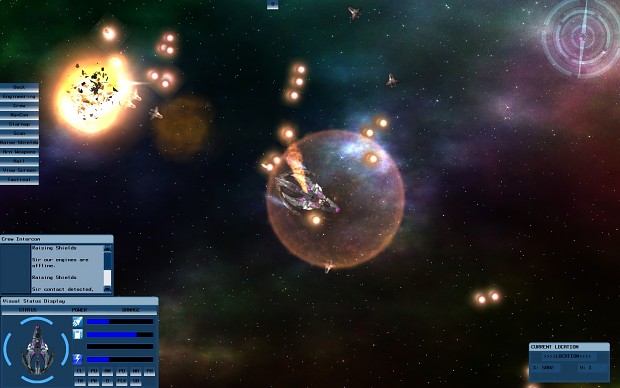 Above: After having suffered heavy damage, I launched several cluster torpedoes, after they detonated several smaller torpedoes were released and headed towards the attacking fighter squadron. Some missed, some hit (large explosion) and others were about to be hit.

All of this combat has been carefully mapped to the mouse, and between that and the keyboard, this makes flying/fighting/using these special weapons quite easy and not frustrating. But that is subject to your opinion.

Looks awesome! cant wait to try it out

Hey thanks, Joel, somehow indieDB doesn't notify of comments, and I have so many sites running now lol. Thanks again.

Look your website it is OK,the game remainder's me of an old superb video game but i can not remember the name.Go for it!