I finally got to work on an actual new feature! Here's my work on adding gates to the game.

Posted by ChocolatePinecone on Jun 23rd, 2020

My available time to work on the game has decreased a lot. My full time job is taking up more focus and time now that I've been assigned to a new client.
I'm happy I had just enough time to wrap up some loose ends and update the demo before this change happened. This update was the last one I had planned before starting on a new feature, gates!

Gates are supposed to block certain directions and open up others. They can be used in various ways to make levels more interesting and complex. I can even make special types in a later update that need colored keys to open for even more interesting level designs.
In essence they work pretty much the same as the gates in "Crazy Gravity", which you can see here: 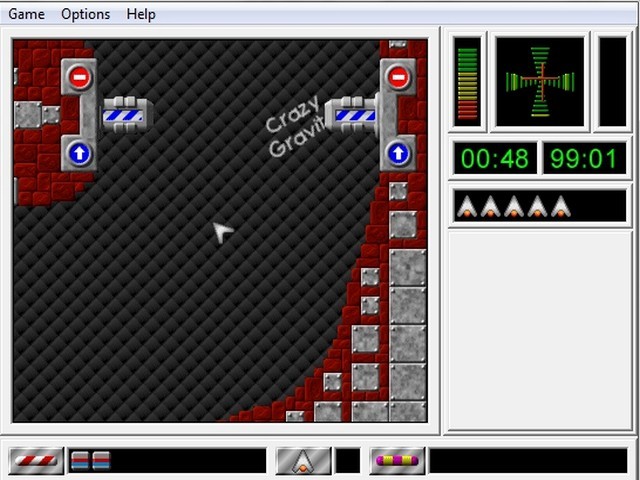 Implementing these gates had a couple of challenges which I hadn't tackled before. This would be the first object that needed construction steps in the editor. All other objects basically only need a position to be placed, but gates need a length and an allowed direction to pass through as well.
It took some time finding the right way to do this, but I'm very pleased with the results:

I chose to show images of possible passing directions instead of trying to explain it in text. I hope they're clear enough to understand.

After I got gate construction, level saving/loading and previews to work, I plunged into getting the gate to detect when to open and close based on player position. After that I only needed to add the actual opening and closing movements and the necessary collider adjustments.
All this I managed to pull off in a coupe of days, resulting in this functionality which makes me a very happy dev:

Sure there's still sound missing and objects resting on moving gates are not pulled along yet, but hey the biggest chunk of work on this feature is complete and I'm feeling pretty awesome about it.

That's my update for now, I hope you enjoyed it!

Want to help me improve the game? Join the Discord!