Post feature RSS Creating a soundscape for the star map

As part of creating the new, pretty star map for SE:SS, I wanted to have a set of subtle background sounds.

The game also includes music, but I'm tending towards playing it intermittently. It's very beautiful, and I think it will work better if it's not playing all the time.

The background sounds have two sources: first, the activities of your ship and crew produce a constant set of noises: typing, talking, machinery humming, sensor scans, micrometeorites impacting the hull. Second, your ship's sensors pick up signals from nearby star systems. The higher your sensor abilities (through equipment like Sensor Pods or crew members with a Sensors skill), the more of these signals you pick up, and the further away you can pick them up from. 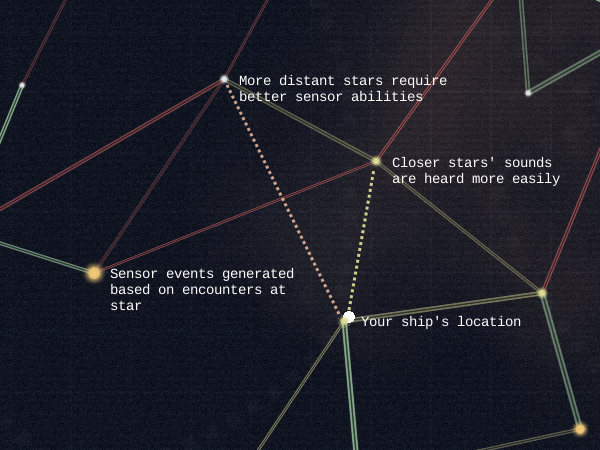 The implementation: Depending on the encounters present, stars occasionally emits a sensor event. The game then decides, based on the distance of your ship to that star and your sensor abilities, whether to play the relevant sound. The sounds are panned accordingly to your viewport, so if something happens to the left of where you're currently looking, it's panned to the left - and if you are zoomed in to the source of the sound, it's a bit louder too.

What I've got right now works reasonably well, but I foresee a lot of fiddling and balancing: some sounds aren't quite at the right volume level, and keeping the soundscape from getting too crowded or sparse at any given time will require some cleverness.